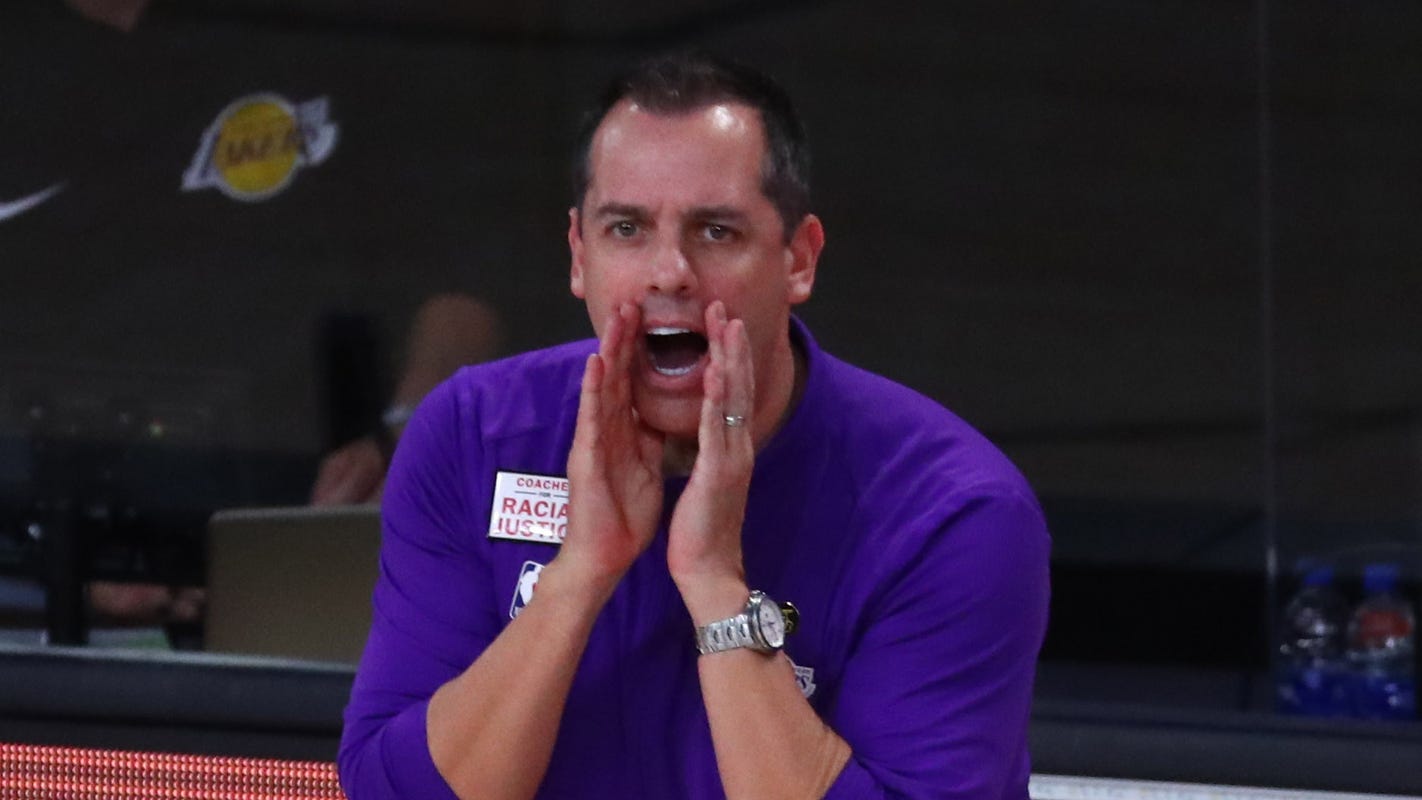 The moment could have called for Los Angeles Lakers coach Frank Vogel to bask in glory. And why not?

In his first season as the team’s head coach, Vogel guided the Lakers to their first NBA Finals appearance in 10 years after dispatching the Denver Nuggets in five games in the Western Conference Finals.

After championship aspirations faltered with the Indiana Pacers (2011-2016) and a rebuilding project never materialized with the Orlando Magic (2016-18), Vogel has proven he is one of the league’s elite coaches. And he impressed the Lakers so much that LeBron James, Anthony Davis and their supporting cast strongly credited him for putting them in a position to succeed.

“He’s been great. He’s been unbelievable. It’s been a crazy obstacle course for our franchise this whole year,” James said. “He’s been able to manage it the whole time.”

James’ words surely pleased Vogel. Certainly his actions have. And yet, Vogel handled this praise the same way he has coached: by deflecting attention and empowering others.

“It means everything to me. But honestly, I’m here to just do the job,” Vogel said about James’ praise. “I have no ego in this. I just want to play my part and create a plan, put guys in position to be tied together and tie the strings together. He’s been invaluable in terms of earning that buy-in. His support of me has meant everything for our group. To me, that’s the greatest sign of a leader, is one that supports the coach.”

But the greatest sign a coach reflects his record is the respect he garners from his players. And in Vogel’s case, his job description went beyond drawing up the right play and managing the correct rotations.

Vogel accepted the Lakers’ wishes to add veteran coaches on his staff in Jason Kidd and Lionell Hollins without any insecurity that either person could undermine him. While Vogel had the luxury of inheriting James and Anthony Davis, he also had the pressure to win them over. Same deal with the Lakers’ newly assembled roster that included nine new players to enter training camp.

All NBA head coaches handle these dynamics. Nothing unique. What is unique? The circumstances Vogel managed.

The Lakers had a disrupted training camp in China while the NBA navigated the fallout with Rockets general manager Daryl Morey offending the country’s government for tweeting support for the Hong Kong protestors. The Lakers were in the middle of their season when Kobe Bryant, his 13-year-old daughter (Gianna) and seven others died in a helicopter crash. Less than two months later, the NBA halted the season because of the coronavirus outbreak. Nearly 4 1/2 months later, the NBA resumed the season at a Disney campus that entailed lengthy time away from family and games being played without fans.

“He’s just always been the anchor, and our coaching staff has been right behind him,” James said of Vogel. “I can’t say anything more than that. Just happy to be on the floor to kind of be his coach on the floor and just command to my teammates the same message that he’s given to me and be an extension of his mind. It’s been great.”

How did Vogel handle those unique challenges? Simple. He followed the message he preached to his players before training camp.

Then, Vogel told his players the biggest opponents will be themselves and so they simply have to live in the moment. So he poured his enthusiasm into his work.

Though he gave detailed scouting reports, he remained flexible with changing schemes and lineups. He has rewarded performing players with playing time, while encouraging struggling performers with tips on how to return to the lineup. Though he offered empathy to coaches, players and staff members following Bryant’s passing, Vogel delicately stayed behind the scenes so that staff members and players that knew Bryant more could feel more empowered to speak. During the season hiatus, Vogel stayed busy with formalizing player workout plans and endless game prep while also encouraging his players to enjoy rare free time with their family.

“He’s done a great job with all of us. He shoots it straight to us,” Davis said. “He wants to win. We want to win. So he comes to me and LeBron with a lot of questions and ideas. We give him our opinion on certain things, but we trust him. He comes in and puts the game plan together. He spends hours and hours of watching film and breaking down games and breaking schemes down to try to figure out what’s the best solution for us, what’s the best recipe for us to be successful, and he puts the right players on the floor at the right time.”

Not only did Vogel help the Lakers (52-19) finish with the Western Conference’s best record. They finished with the league’s third best defensive rating (106.1), which measures points allowed per 100 possessions. Though they ranked 11th in total offense (113.4), they ranked first in shooting percentage (48%) and 10th in assists (25.4).

And in the playoffs? The Lakers dispatched all of their opponents in five games for various reasons. Vogel adjusted lineups to counter Portland’s backcourt, Houston’s small-ball combinations and Denver’s frontcourt. He maximized James’ workload without burning him out. He pushed Davis to increase his aggressiveness without offending him. He juggled various rotations without losing players’ respect.

“He’s done a great job considering how tough it is. Night in and night out, he has the hardest job in this organization,” Lakers guard Danny Green said. “He has a lot on his plate. But he’s figured it out and he’s given us a chance every night to be special. We have some work to do. But he and the coaching staff have done an unbelievable job of getting guys rhythm, keeping them in rhythm and finding minutes for a team that has a lot of depth.”

After struggling to have success in Orlando, however, it became uncertain when Vogel would get another chance. He impressed the Lakers enough during his job interview. Nearly a year later, they realized Vogel made a good first impression by backing up his sales pitch with substance.

“I was always hopeful that I would get another opportunity. I remained confident in my belief in myself. But you know this career achievement is so far away from where I’m at mentally right now,” Vogel said. “I’m just trying to play my part. Give our guys a plan, make sure that everybody is playing together. This run is about LeBron James and Anthony Davis and all the guys that bought into starring in their roles. And it’s about the Lakers family who is used to being in this position, used to being in the Finals and used to winning championships. It’s been a long time for them and it’s been a difficult number of years out of the playoffs. So it’s really just all about them.”

Vogel’s players respectfully disagree. Thankfully for the Lakers, they at least are on the same page as their head coach on what it takes to win games.