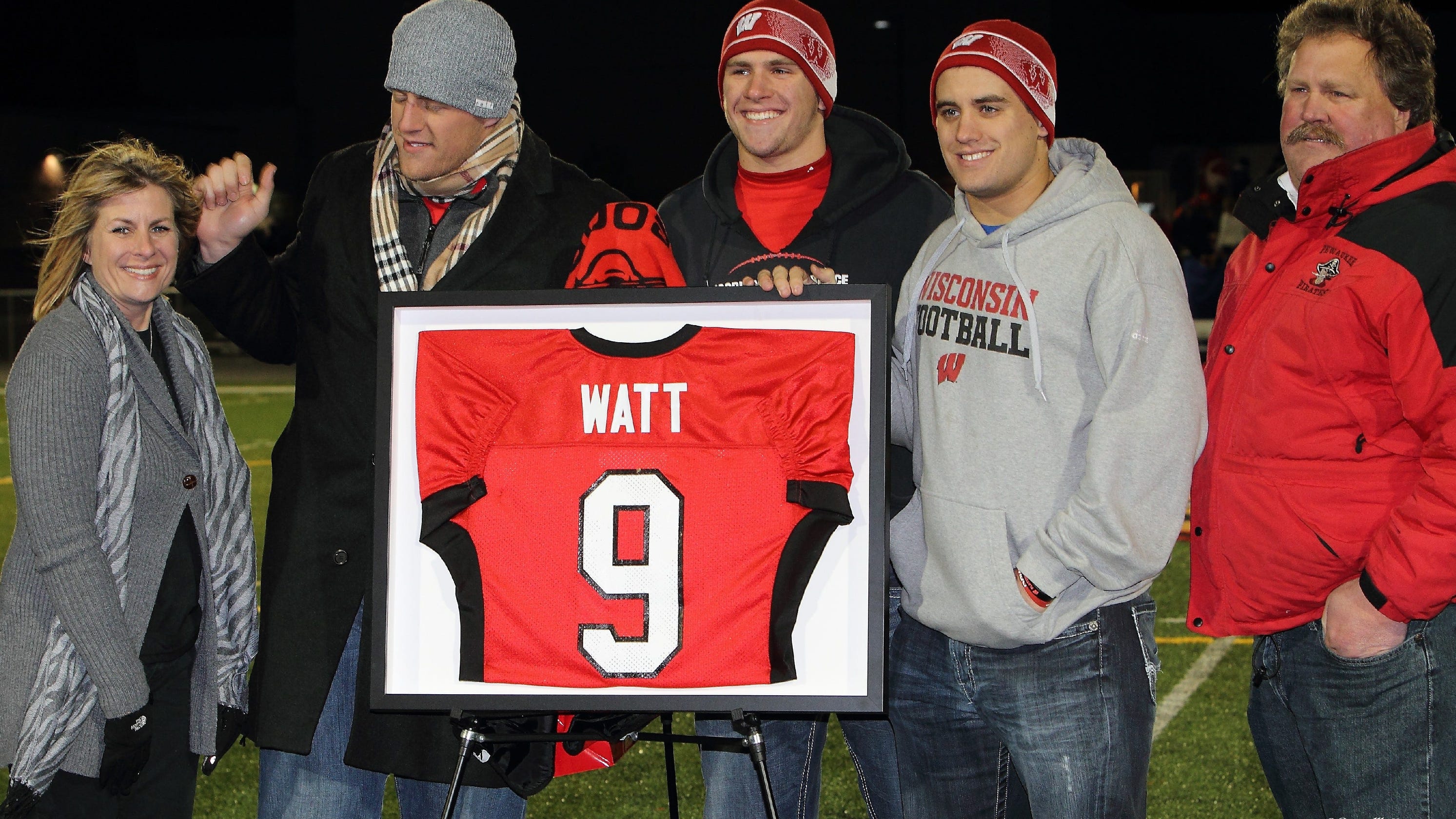 They’ve been inside stadiums all over the country watching their sons play, usually in custom outfits bearing the insignia of two — and often three — NFL franchises.

Their new apparel, pared down to just two teams, arrives soon. But John and Connie Watt won’t be able to show it off. When the three Watt brothers take the same NFL field Sunday, their parents will be on the couch in Waukesha County.

“Unfortunately, we pulled as many strings as we could, and all of them broke,” John Watt said, a line he’s repeated during a cascade of interviews leading before the Houston Texans (0-2) and Pittsburgh Steelers (2-0) play Sunday at Heinz Field in Pittsburgh. “We’re not in the box or anything and not going to try and sneak in. It looks like we’re on our sofa.”

It’s the latest opportunity denied by COVID-19, with the stadium empty Sunday as a health precaution. It’ll still be a partial family gathering for the former Pewaukee High School and University of Wisconsin stars.

J.J., the three-time NFL defensive player of the year suiting up for the Texans, will be outnumbered in Watt presence by the Steelers, who feature both younger brothers Derek and T.J. It’s Derek’s first year in Pittsburgh after he signed as a free agent over the offseason following a four-year run as fullback for the Los Angeles Chargers.

“With Derek’s free agency, the thought crossed the back of our minds (that he could join a brother), but his agents downplayed it,” John said. “(They said), ‘Pittsburgh might be a little interested, but not as much as some teams.’ The day the phone call did come (that Pittsburgh wanted to sign Derek), we were all at J.J.’s house in Summit, and it put a smile on everybody’s face to say the least.”

At least two Watt brothers have been involved in five NFL games, though injury has kept two of them from being an on-field meeting.

Derek and J.J.’s teams squared off in 2016, when the Chargers beat the Texans, 21-13, but J.J. was sidelined for all but three games that season after back surgery and wasn’t available for the post-Thanksgiving contest.

T.J. and the Steelers played the Texans in T.J.’s rookie season of 2017, but J.J. suffered a fractured leg in his team’s fifth game and didn’t play.

“I’m looking at some pictures right now on our shelving unit here that has two pictures of Derek and TJ, walking off the field together,” John said. “There’s another one where they did their jersey exchange at the end of the game; hopefully the boys will be able to do something (for a photo opportunity in this game). We have a lot of people taking pictures on both sides of the battle on Sunday for us, getting all three boys together.”

In the Chargers-Texans game last year, Derek leveled a block against J.J. that the oldest sibling still recalls.

Pewaukee High School honored J.J. Watt by retiring his No. 9 Pirates jersey Oct. 25, 2013, during the program’s varsity playoff game against Elkhorn. Among those on hand were (from left) mom Connie, J.J., brothers T.J. and Derek and father John. (Photo: Dan TeRonde/Submitted Photo)

“I won the game, so, it doesn’t matter,” J.J. told reporters Wednesday. “But, yeah, he tossed a chip in the ribs. That’s what he does. He’s a pesky little fullback. He sticks his elbow in your ribs as you’re pass rushing and then he goes on his way. We’ll see what happens on Sunday.”

Derek already has a memorable moment in a Steelers uniform, responsible for a safety on special teams in a Week 2 win over Denver. Broncos punter Sam Martin dropped a snap, then got tackled by Watt in the end zone before losing the ball out of bounds. In the same game, T.J., who finished third in the NFL defensive player of the year voting last year, recorded 2½ sacks.

PICKS: Who are our experts taking in Week 3?

They’ll be looking to reach the rare air of 3-0 when J.J.’s team comes to town. John said it would be a best-case scenario if the game ended in a tie, of course.

“They would get back out on the field (in some sort of competition) just so one of them could say they won,” John said with a laugh.

A new start for Derek

Derek has had a chance to watch his former teammates profiled on the HBO show “Hard Knocks” this season, and the Watts said they’ll remember the California experience fondly.

“We kind of kept certain things because it was a very cool experience,” said Connie, whose first grandchild, Logan, was born to Derek and wife Gabriella during his time with the Chargers. “That was an incredible opportunity for Derek and lot of great memories.”

The brothers, always supportive of each other on social media, frequently tease each other about whether T.J. or J.J. can land the status as Logan’s “favorite uncle,” and now T.J. has a geographic advantage.

“He’s still a little young to grasp the situation fully, but T.J. definitely will have the upper hand now,” Derek told reporters after he signed. “If he somehow botches this and doesn’t come out on top as favorite uncle, that is 100% on him. He will for sure have more access and more opportunities to be around Logan and spoil him as much as he can.

“J.J., he’s very happy for us because we get this opportunity. He’s always said that he’s envious of T.J. and I, we’ve had the chance to play together in high school, college and now the NFL. He knows how special that really is. He never had that opportunity. I kept missing him by a year. … He’s extremely happy for us. He’s jealous of the fact that we get to play together.”

All smiles between these 3 brothers 😁 pic.twitter.com/qIdv8IBPq2

“We have that bond of mothers with three boys in the NFL, and a deeper bond with two on the same team,” Connie said of her relationship with Felecia Edmunds. “Neither one of us ever could have imagined this, you just don’t envision that, to have that is incredible. We do talk a lot and share stories, similarities and differences and the way we still keep our kids humble.”