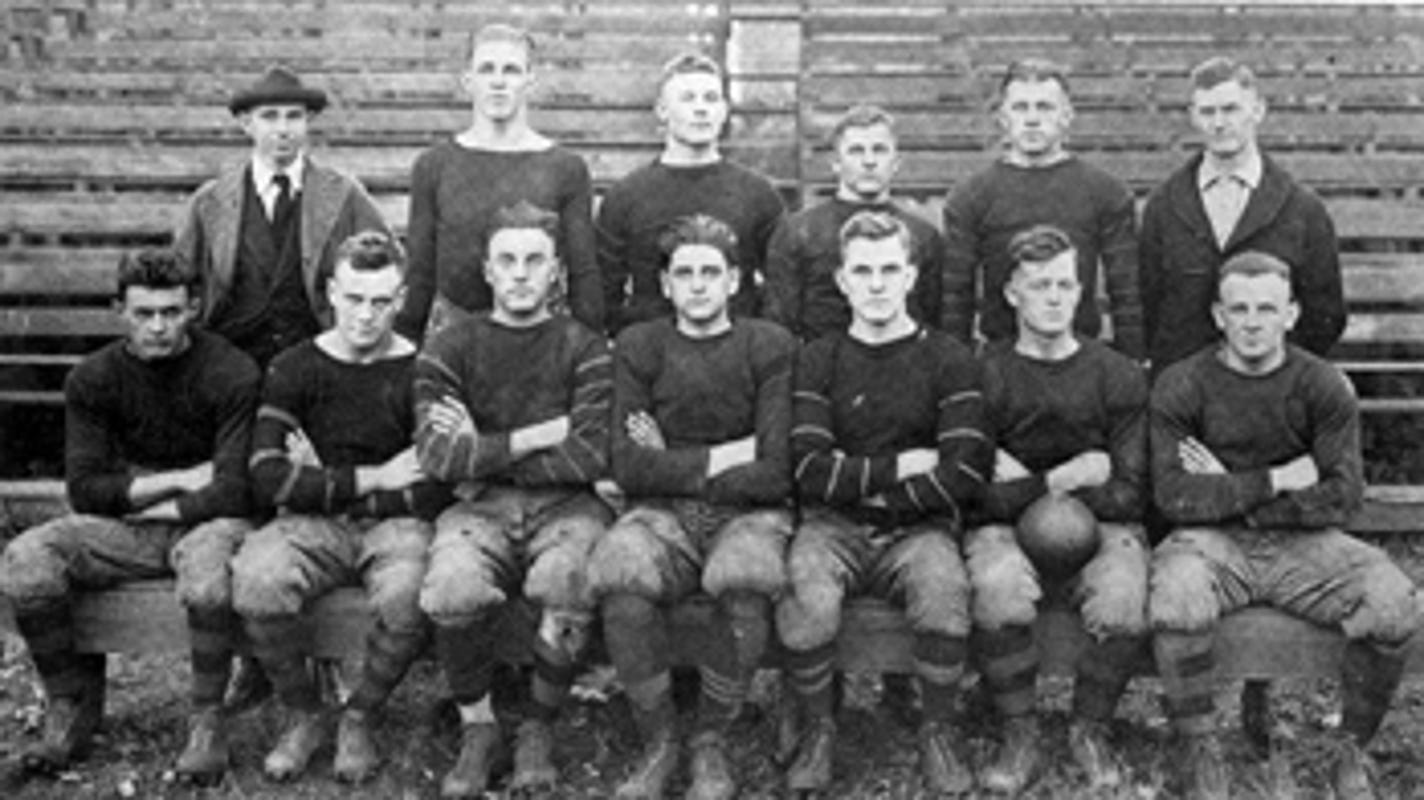 Vanderbilt’s football season was delayed by a coach’s illness amid a pandemic, and the university’s senior medical students petitioned the faculty for early graduation to be sent to the front lines.

Masks were worn in public. People were encouraged to avoid large crowds. Church services were canceled and schools were closed. And caskets were in short supply.

In the fall of 1918, college football was a welcome distraction for some and an impossibility in a time of crisis for others. Vanderbilt merely did what it could to play an abbreviated football season as the Spanish flu pandemic raged and World War I waned.

The 1919 Commodore yearbook called it “one of the most difficult years through which Vanderbilt ever passed, (a) story of sacrifice and hardships … (and the) depleted ranks of Vanderbilt students.”

Members of the Vanderbilt’s 1918 football team, although some are not pictured. The team included 13 players, one manager and coach Ray Morrison. (Photo: Vanderbilt)

As Vanderbilt approaches the start of the 2020 football season amid the COVID-19 pandemic, a century-old reflection reveals similarities to the fall of 1918. But a closer look also shows the extra hardships that Nashville and Vanderbilt endured in that year.

“So many bad things happened in Nashville in 1918,” Nashville historian David Ewing said. “The war was the worst, by far. But they were all bad.”

In 1918, Vanderbilt had 13 players, including 11 starters who rarely left the field. Their season was postponed for three weeks until Oct. 19 so coach Ray Morrison could recover from the flu. A 6-0 loss to Camp Greenleaf started a six-game schedule that some viewed as an unofficial season — including the rival Tennessee Vols.

Historical documents, old yearbooks and newspaper archives show how Nashvillians and Vanderbilt students were more concerned with winning World War I than outlasting the pandemic.

However, the latter took precedent in late fall, when the war ended and the death toll from the flu rose. About 1,300 Nashvillians died of flu-related illnesses, including a spike in October 1918. Hardships seemed to overlap during a Vanderbilt football season that was unlike any before or since.

The war struck Vanderbilt before the flu. On Aug. 18, 1918, former star quarterback Irby “Rabbit” Curry, a fighter pilot, died when his plane was shot down by Germans over France. Just three years earlier, Curry had scored an 80-yard touchdown with three broken ribs to carry the Commodores past Sewanee in the season finale to post a 9-1 record.

In 1918, Curry was one of 36 former or current Vanderbilt students to die in the war, according to the 1919 yearbook. Legendary coach Dan McGugin, when he heard the news, sent a telegram to The Tennessean that said Irby “had a lion’s heart and now a hero’s death. Poor Little Rabbit!”

Vanderbilt quarterback “Rabbit” Curry, a teammate and friend of Johnny “Red” Floyd, was killed in a combat mission in World War I. (Photo: Vanderbilt)

By then, McGugin had left Vanderbilt to serve as an Army colonel. Morrison, another former star quarterback, returned to the Commodores as interim coach. But Morrison caught the flu, according to a 1918 Nashville Banner article, which delayed the start of practice.

Players enlisting in the military altered the roster, and there were no guarantees the season would be played at all. On Oct. 1, as games were being canceled, nearly 500 male students took an oath in the Vanderbilt chapel to enlist in the Student Army Training Corps.

Football was a means to develop discipline, leadership and physical conditioning needed in the military, so the team was kept together. The campus turned into a makeshift military training base, and then the flu struck Nashville.

On Sept. 28, 1918, a Tennessean article began, “Now Nashville has the Spanish influenza, too.” The epicenter was the DuPont gunpowder plant in Old Hickory, where cases increased for more than a month.

Doctors were in short supply, and hospitals were overrun. By late September, at least 20 Nashville doctors had been called to military camps around the country to treat soldiers who had the flu. On Oct. 2, at least 50 potential flu patients were turned away during a five-hour period at the Nashville city hospital.

“The epidemic is the most serious I have known in Nashville,” Dr. W.F. Fessey, superintendent of the hospital, told The Tennessean. “A number of the patients are in critical condition and will die.”

The basement of the YMCA was converted into a temporary morgue, an unfortunately familiar situation for Nashville that year. On July 9, at least 101 had died in the Dutchman’s Curve accident in Belle Meade in the deadliest train wreck in American history.

Those passengers were headed to work at the DuPont plant, where doctors were needed in October to treat the flu and keep the war effort going.

“If that gunpowder plant was shut down, it could’ve had a large impact on the fighting in Europe,” Ewing said. “Most people knew someone personally who died in the war, so it motivated them to help.”

Vanderbilt medical students filled the void as volunteers at the plant for 10 days. Earlier that spring, they had requested summer classes for early graduation and immediate duty treating soldiers in Europe, but the faculty turned down the request. The students proved to be life-savers in battling the flu in Nashville.

“Something happened to make us feel that maybe we were of some use in the world after all,” the medical students recorded in the 1919 yearbook. “Each man who went (to the DuPont plant) had experiences which will live always in his memory.”

Vanderbilt posted a 4-2 record in the 1918 football season. Many college players left to serve in the war, so some schools turned their football programs into intramural squads.

Rosters were stocked with Army recruits and men who had returned from military service, so players varied in age.

Herman Daves, Vanderbilt’s captain, was 28 years old in the 1918 season. In 1912, he had played a key part as a lineman in the Commodores’ record-breaking 105-0 win over Bethel and a Southern Intercollegiate Athletic Association title. He returned to the team near the end of the war and finished his engineering degree.

Some games in 1918 were played against Army training camps. The Commodores lost their opener to Camp Greenleaf, which was at Fort Oglethorpe in Georgia. Two years earlier, Morrison had worked at Fort Oglethorpe, which was used as a medical officer training facility and a prison for German POWs during the war.

Vanderbilt’s 1919 yearbook wrote off the loss because Camp Greenleaf was “composed largely of former All-American” players. The Commodores lost 25-6 to Camp Hancock, which was led by Howard Berry, an All-America halfback at Penn and a future Major League Baseball player.

Vanderbilt reeled off four straight wins over future SEC teams by a combined score of 170-0 with no major disruptions from the flu outbreak.

The Commodores won 33-0 over Kentucky, which had been prevented from practicing for almost four weeks because of a state mandate barring large gatherings. “(The Wildcats) were defeated through no fault of their own,” the Kentucky student newspaper reported after the game.

Quarterback “Doochie” Sherman was dubbed a “strategic and foxy gentleman.” Punter Frank Goar, the hero of the 40-0 win over Sewanee, had a “Venus-like figure” at 5-foot-10, 165 pounds.

Center H.G. Hill Jr., whose father started the Nashville grocery store chain by the same name, was described as a “chunky, well-fed lad (who) stirred up considerable furor at the pivot position.”

Did Vanderbilt beat the Vols or not?

Kentucky, Auburn and Sewanee acknowledge the 1918 losses to Vanderbilt as official games in their record books. Tennessee does not.

With most players and coach John Bender serving in the military, the Vols fielded two squads of Army recruits and students in 1918. After a bench-clearing brawl in an intrasquad scrimmage, they merged into one team but lacked rapport in facing off-campus competition.

On Oct. 1, 1918, almost 500 students took an oath in the Vanderbilt chapel to enlist in the Student Army Training Corps. (Photo: Vanderbilt)

“The (Tennessee) men had practically no coaching and had worked together only a few times,” the Knoxville Journal and Tribune reported a week before the Vanderbilt game. “(They) met a week ago and some of the players were unacquainted with each other.”

Vanderbilt beat the Vols 76-0 — or 74-0 or 82-0, depending on various news reports of the time — behind six touchdowns from halfback G.H. Berryhill, a sophomore medical student from McKenzie. Reports compared Berryhill’s performance to Curry, whose death was still being mourned by the Commodores.

“(The game) was a slaughter. It was a shame. It was like taking candy away from a baby or taking the coins from a dead man’s eyes,” the Nashville Banner reported. “Tennessee has the weakest team that was ever sent against Vanderbilt.”

Vanderbilt’s yearbook used a war reference to describe the rout, writing, “In less than five minutes (the Vols) were hot-footing it across No-Man’s-Land toward The Hill.”

Tennessee still recognizes the game as unofficial because the football program was suspended during World War I, which ended two days later on Nov. 11, 1918. The discrepancy seemed like a small disagreement at such a tumultuous time.

The Spanish flu pandemic subsided by the end of the 1918-19 school year. It killed approximately 50 million people, including 675,000 Americans. But that didn’t stop Vanderbilt students from enjoying a little dark humor in celebration once it ended.

In the 1919 yearbook, a poem entitled “Joy” described the anxiety of a student who was unprepared for an exam and the elation when his professor didn’t show up for class.

The poem ended with the line, “(We) came in to fail without ado, (but) learned that he had caught the flu.”