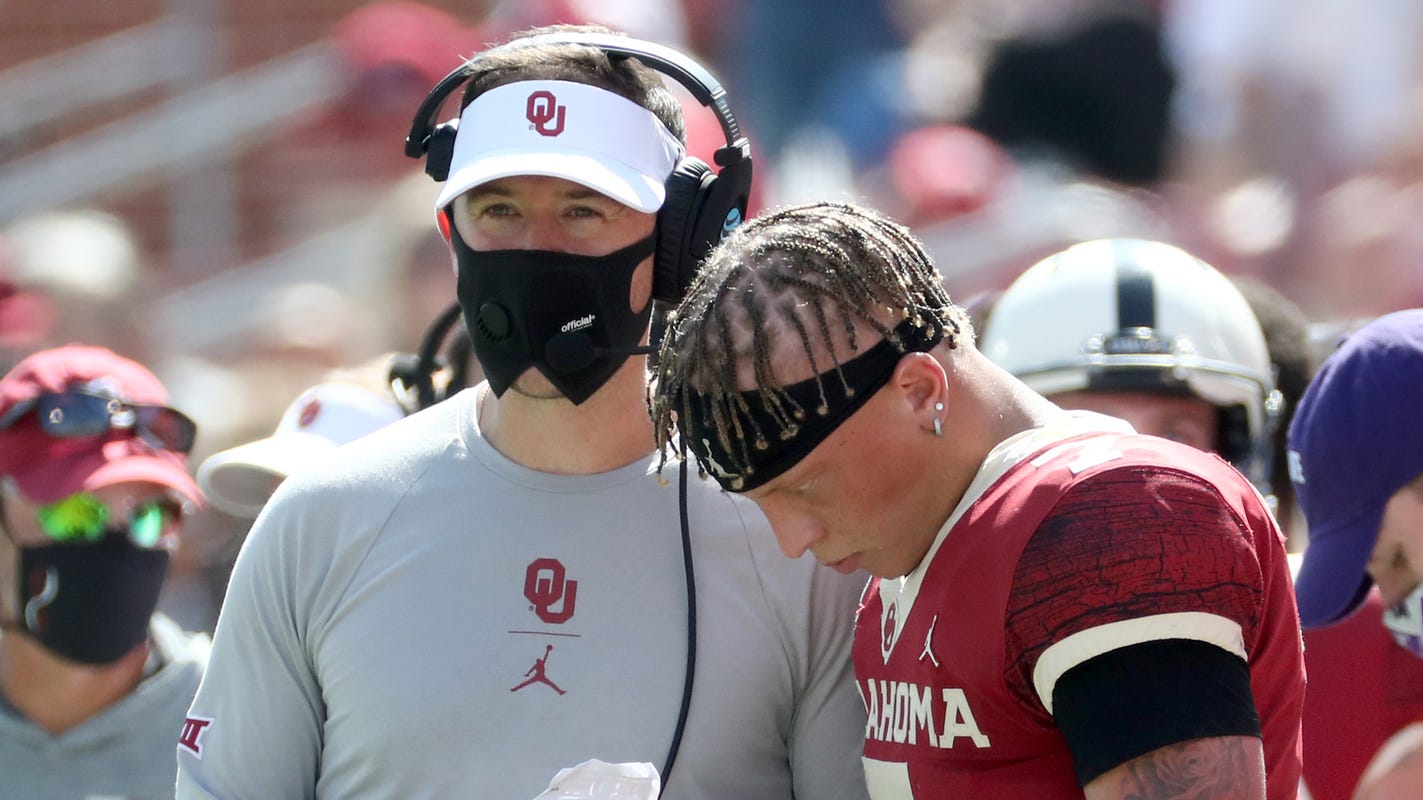 Big 12 is not in a great place

Way, way back in mid-August — in pandemic time, six weeks feels more like six months — the fate of the entire college football season was in the hands of the Big 12.

At that point, the Big Ten and Pac-12 had already announced they were going to shut down fall football and try to play in the spring. The SEC and the ACC, meanwhile, seemed pretty dug in on trying to pull it off in the fall. But those two conferences trying to go it alone among the Power Five was probably not going to work. They needed the wobbling Big 12 to give them a quorum, so to speak, that would allow a legitimate season to happen.

Ultimately, the Big 12 said “Game on,” allowing the season to proceed. (And all the leagues that opted out have subsequently opted back in). But purely in football terms, the Big 12 has not looked at all ready to play.

Though you can’t really write anyone in or out of the College Football Playoff after just a few weeks, it seems pretty clear that the Big 12 is going to have a massive climb after Oklahoma’s fourth-quarter collapse against Kansas State in a 38-35 loss on Saturday and Texas’ remarkable overtime escape against Texas Tech.

So far, the Big 12 isn’t merely living up to its reputation as the league most susceptible to chaos and parity; it’s signaling that the bad teams are really bad and the good teams aren’t particularly good. That’s not a great recipe for a CFP bid.

The bottom line is, the issues with the conference’s two premiere programs haven’t changed. Oklahoma’s defense is still a problem. Leading 35-14 late in the third quarter, the game turned on a 78-yard completion by Kansas State, which then out-scored the Sooners 17-0 in the fourth.

Meanwhile, Texas looked bad on defense, special teams and the offensive line and faced almost certain defeat in Lubbock trailing 56-41 with 3:13 remaining. The fact the Longhorns somehow won the game 63-56 is a testament to some clutch playmaking late and a complete collapse by the Red Raiders.

But while Texas can momentarily breathe a sigh of relief, this was not an encouraging performance for Tom Herman, who retooled his entire coaching staff after a disappointing 8-5 record in 2019.

Maybe one of those two teams can resolve enough issues to run the table, but the Big 12 looks like the kind of league where flawed teams are going to beat each other all year. That makes for entertaining viewing, but not playoff success.

Analysis: Spencer Rattler starts strong, but struggles late as No. 3 Oklahoma is shocked by Kansas State

Here are nine other takeaways from the first truly big weekend of college football games:

►The sport’s most intriguing long-term question is whether LSU’s historic 2019 season was a one-time alignment of the cosmos or something Ed Orgeron can recreate time and again the way Dabo Swinney did at Clemson after breaking through for his first title. Let’s be clear — we don’t know the answer and won’t for awhile.

But the first look at LSU after its post-championship exodus was not particularly impressive. The Tigers got pretty thoroughly handled by Mississippi State, 44-34, and will surely take a deserved tumble out of the Top 10. It wasn’t just that LSU’s defense (led by former Nebraska coach Bo Pelini) yielded 632 total yards, but on offense the Tigers only were able to run for 80 yards on 38 attempts. LSU was plus-2 in turnovers and never led after the second quarter.

Again, regression was inevitable when you lose pretty much every major contributor from last season, including the No. 1 overall draft pick in Joe Burrow, defensive coordinator Dave Aranda and passing game coordinator Joe Brady. But the visual LSU offered Saturday was that of a rebuild, not a reload.

►Georgia will surely be happy to get USC transfer quarterback J.T. Daniels into the mix as soon as possible after a 37-10 win at Arkansas that was far stickier for about 2½ quarters than the final score would indicate. Daniels, who tore his ACL last season, hasn’t been cleared for full contact practice but coach Kirby Smart had suggested before the game that it could come any time. There seems to be some hope he’ll be available soon.

And Georgia probably needs him as the games get tougher because its offense looked pretty rough against the Razorbacks until the talent gap just took over and helped break the game open. The situation was so bad, in fact, that Georgia benched starter D’Wan Mathis and went to former walk-on Stetson Bennett, who would have been the fourth-stringer this summer behind Mathis, Daniels and Jamie Newman, the Wake Forest transfer who ultimately decided to opt out of the season.

Bennett did a solid job and made the easy throws, going 20-for-29 for 211 yards. But until there’s some continuity and certainty at the quarterback position, things are going to look a bit out of sync.

It’s worth noting that Georgia plays Auburn next week — a rivalry game that usually takes place in November — so there’s huge urgency to figure things out.

►The coolest story of the day was Louisiana kicker Nate Snyder, who hit a 53-yard field goal at the buzzer to beat Georgia Southern, 20-18. How improbable was that kick? Snyder, a graduate transfer from Indiana where he was a kickoff specialist, came into Saturday just 1-for-4 on the season. Earlier in the game, he missed a 34-yarder.

So the odds of that 53-yarder going through seemed pretty low for Louisiana, which was at risk of losing its spot in the Amway Coaches Poll after a 2-0 start. But Snyder got it through, and Louisiana — after escaping a scare last week against Georgia State — has the early look of a team that is dancing between the raindrops.

LOUISIANA DRILLS A 53-YARD FIELD GOAL FOR THE WIN! pic.twitter.com/2qL0S6sAZN

“I just had a slow start to the season,” Snyder said. “The team believed in me, picked me up at halftime. Just wanted to go out and prove I’m here for a reason.”

►Though Ole Miss did not have nearly enough to keep up with Florida, Lane Kiffin’s debut was exciting enough in a 51-35 loss to raise already-high expectations to unrealistic levels. If nothing else, Kiffin’s offense promises to be pretty fun this year, racking up 613 yards — 443 through the air — on a Florida defense that will probably be one of the better units in the league when it’s all said and done.

Ole Miss’ numbers were inflated a bit by a couple touchdown drives at the end when the game was well in hand, but Kiffin’s willingness to go for broke and reach into the bag of tricks is going to keep opponents on their toes all year. The more important revelation, though, is that Matt Corral looked like a quarterback with real potential, throwing for 395 yards on 22-of-31 attempts. Corral, if you remember, was a big-time recruit for former coach Matt Luke but lost his job to John Rhys Plumlee early last season. Plumlee, who is more of a runner, was the type of quarterback former offensive coordinator Rich Rodriguez likes to use, but clearly Corral is the more impressive talent and will benefit greatly from being under Kiffin’s tutelage.

►Of course, nothing happens in the state of Mississippi without one of its schools being compared to and connected to the other. And Kiffin’s debut was pretty quickly and dramatically one-upped by Mike Leach’s, as Mississippi State pretty much did as it pleased against LSU. In classic Leach fashion, the Bulldogs had just nine rushing yards and only 16 attempts but threw it 60 times and set a record with 623 passing yards in Stanford transfer K.J. Costello’s debut at quarterback.

Now, let’s keep a couple things in context. It’s possible that this was just a particularly good matchup for Mississippi State against a brand new LSU defense, which as also missing the nation’s best cornerback, Derek Stingley Jr., due to a non-COVID illness. And the popular narrative that Leach’s Air Raid offense was never going to work in the SEC was never actually a narrative. First of all, it already has worked as Leach was Hal Mumme’s offensive coordinator in 1997-98. And a version of it has been working the last several years as SEC offenses have become more modern.

Mississippi State will be a formidable pain in the rear under Leach, just as Washington State was in the Pac-12. But a win like the one they had Saturday does not mean the Bulldogs are about to take over the SEC.

►Florida State fans might want to hide their eyes this season. It’s going to be an ugly slog back to relevance. It was very clear in the Hurricanes’ blowout win that Miami’s build under Manny Diaz is much further along than Mike Norvell’s. Though Norvell couldn’t participate in the game due to testing positive for COVID-19 last week, that doesn’t fully account for how lost the Seminoles looked most of the night.

►Mac Jones is going to be just fine, folks. In a sense, Jones taking over at quarterback represents a return to normalcy for Alabama, which played a style that doesn’t necessarily suit its personality the last couple years with Tua Tagovailoa at quarterback. Jones isn’t as flashy, but he showed last year after Tagovailoa’s injury that he’s solid enough to get the job done and distribute the ball to Alabama’s elite playmakers. If Jones replicates what he did against Missouri on Saturday — 18-of-24, 249 yards, two touchdowns, no interceptions — it will be plenty good enough.

►If you had polled every coach in FBS about which team they projected to be the worst in the country this year, UTEP would’ve gotten a lot of votes — maybe the most. But the Miners, it appears, have already blown past those low expectations as they sit at 3-1 following a 31-6 win over Louisiana-Monroe. Nobody is going to get carried away about what that means — the other two wins were against FCS programs Stephen F. Austin and Abilene Christian — but it’s still a nice place to be for coach Dana Dimel, who went 1-11 in each of his first two seasons. Going back even further to 2017, UTEP was just 2-34 over the last three years. So it’s a pretty big deal for the Miners to be 3-1 — and clearly not the worst team in FBS.

►Cincinnati scored a no-nonsense, low-drama win over Army in one of the most impressive defensive performances of the young season. During a period when it seems like defenses are struggling to tackle and play with physicality due to limited offseason training, Cincinnati held Army to 276 total yards (and just 182 rushing) in a 24-10 win. Circle Nov. 21 on your calendar: That’s the day Cincinnati travels to UCF, and a New Year’s Six bowl berth could very well be determined by who wins that game.