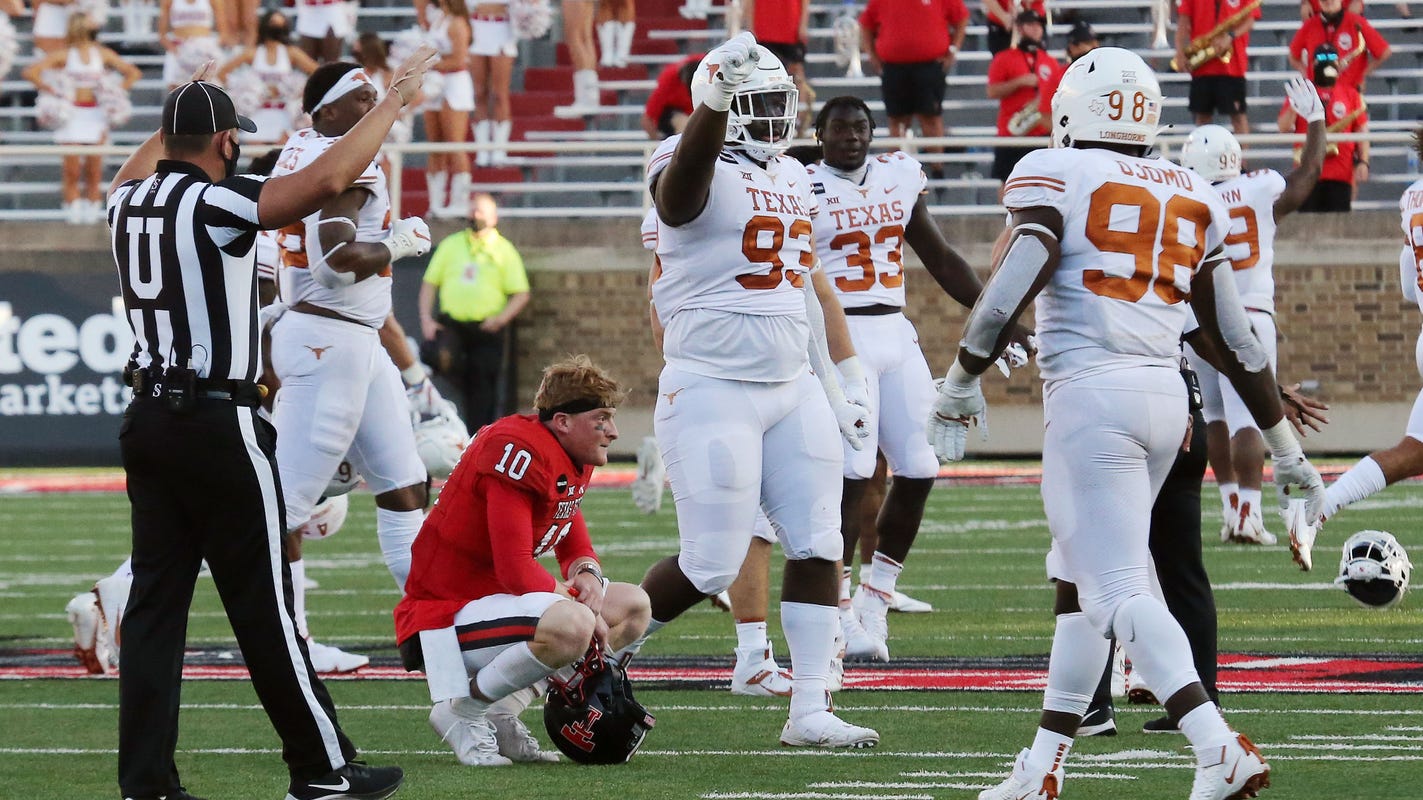 LUBBOCK, Texas — Saturday was one of those rollicking, back-and-forth humdingers totally on brand for the unpredictable Big 12.

No. 9 Texas found itself in a wild shootout against Texas Tech. There were incredible touchdown catches, a terrific onside kick, momentum-swinging interceptions, a muffed punt for a touchdown and a blocked punt for a score.

Start with the crazy finish. In a disastrous second half for Texas in a game pockmarked by horrendous special teams, one play almost put things away for the Red Raiders (1-1, 0-1 Big 12). Tech’s SaRodorick Thompson should have been bottled up for about a 2-yard loss. Instead, he broke free and raced 75 yards for a game-clinching touchdown. Or was it?

Sam Ehlinger connected with Brennan Eagles for a 12-yard touchdown catch. Then, Malcolm Epps recovered the onside kick. Ehlinger then found Joshua Moore for an 18-yard touchdown and Eagles for the two-point conversion with 40 seconds left to send the game into overtime, the first time the two teams have played an overtime in series history.

Texas got the ball first in overtime. Ehlinger went right back to Moore again. The receiver had his third touchdown catch of the day on a slant play from 12 yards out. Then, it was Tech’s turn.

On first down, Ta’Quon Graham brought down Thompson with a terrific stop. On second down, Anthony Cook was there for a key pass breakup.

On third down, Thompson appeared to catch and then drop a ball in the left flat. Joseph Ossai was there to pounce on the apparent turnover. But after review, officials determined that Thompson had dropped the ball for an incomplete pass. That brought up fourth-and-14 from the Texas 29.

Then finally, long when the shadows had overtaken the eastern stands, Tech’s Alan Bowman threw a ball to the west sideline and Texas’ Caden Sterns was there for the game-ending interception.

It was an ideal start on a rather hot West Texas day. Texas’ first scoring drive was helped by Tech’s neutral zone infraction on the lip of the goal line. That gave the Horns a fresh set of downs at the Tech 2. Ehlinger just ran it in himself for the scoring, giving Texas a 7-0 lead. But that was quickly erased when KeSean Carter made a terrific catch in traffic between two UT defenders.

Cameron Dicker hit a 43-yard field goal, and Joshua Moore went up and grabbed a 31-yard touchdown catch on a play that could’ve easily been an interception. Texas was up 17-7 and cruising.

Then, Tech turned the momentum. Carter scored on a 22-yard touchdown pass, and Tech coach Matt Wells rolled the dice with an onside kick. Kicker Trey Wolff’s boot couldn’t have gone any better as Texas looked totally caught off guard. Wolff slid just beyond the 10 yards and the ball bounced right into his arms.

But within a flash, Tech gave it right back. Bowman threw it deep, and Texas’ Chris Brown cut off his angle for an easy interception. On the Longhorns’ next drive, Ehlinger kept the ball for a key 24-yard gain up the middle to set up Roschon Johnson’s 1-yard score.

But once the third quarter began, the special teams went haywire for both sides. D’Shawn Jamison muffed a punt, and the ball rolled into the end zone where Tech’s Xavier Martin fell on it for a score. Texas actually negated that with its first blocked punt for a touchdown since 2011 when Jahdae Barron corralled a loose ball in the air while running into the end zone.

Tech’s T.J. Vasher, who has done some damage to the Longhorns in the past, gave the Red Raiders a 49-41 lead with his 18-yard touchdown catch. Thompson’s long run should have ended it, but it merely set the stage for the late theatrics from Ehlinger and Moore.