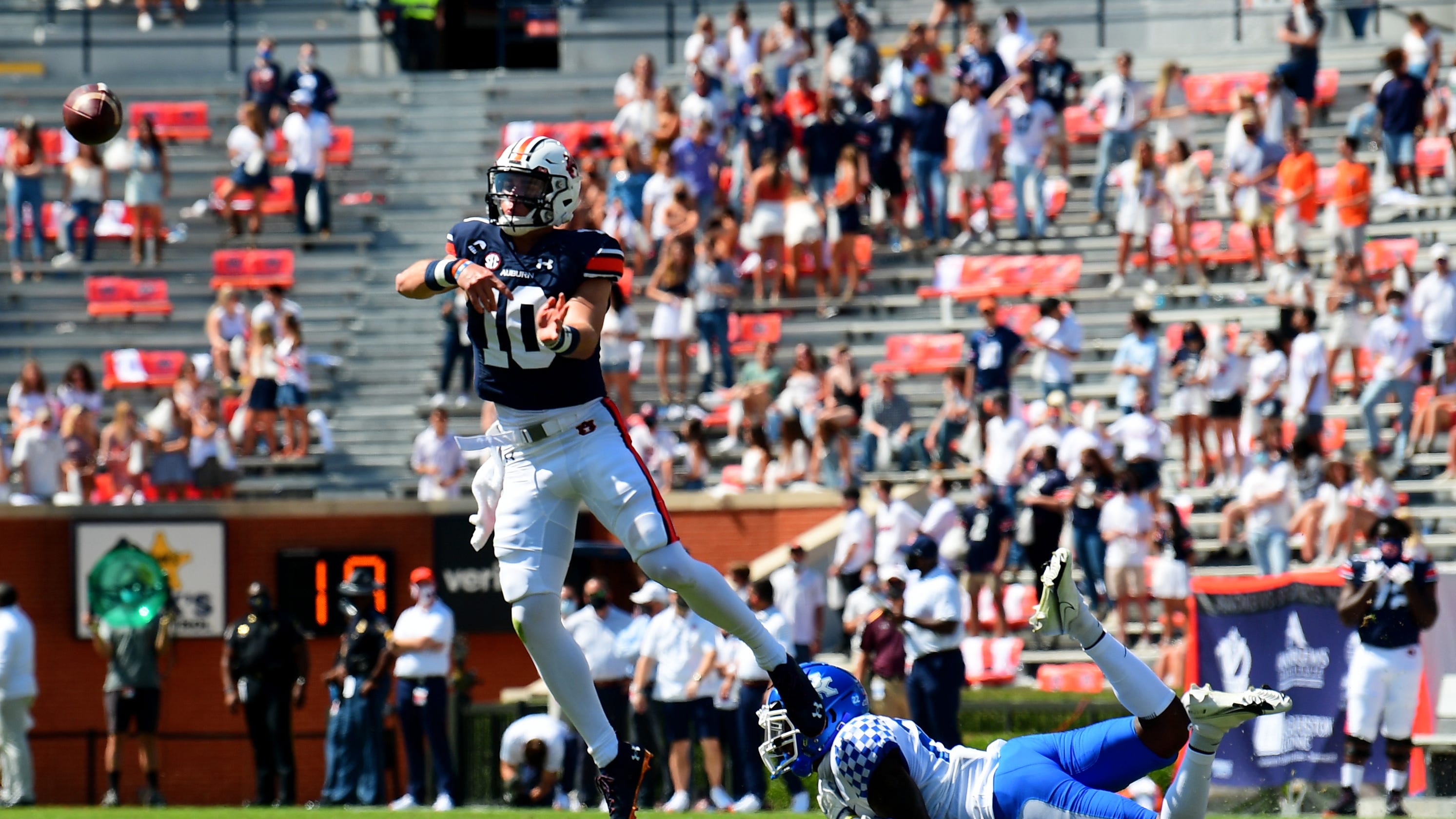 And a 2020 opener that felt like it never would get here arrived at Jordan-Hare Stadium, with the No. 8 Tigers defeating Kentucky 29-13.

Nix’s growth as a passer came with a common-sense approach — throw the ball in the vicinity of Seth Williams when in doubt. The quarterback and go-to receiver connected for two of Nix’s three passing touchdowns.

Seth Williams scores a touchdown during the first half against Kentucky at Jordan-Hare Stadium. (Photo: Shanna Lockwood, Auburn athletic department)

As for the defense, it took advantage of miscues from a veteran Kentucky offense.

When Wildcats quarterback Terry Wilson dropped the ball looking for a fourth-quarter first down, Jamien Sherwood scooped it up and returned it seven yards to the Wildcats’ 23. That set up the second Nix-to-Williams scoring pass and effectively ended Kentucky’s hopes of an upset.

The final score from the sophomore that killed the game wasn’t the only momentum shifter.

At the end of the first half, Roger McCreary stepped in front of a Wilson pass at the goal line and headed 100 yards in the other direction. The pick six was nullified by a targeting call from a block on the return, but it ended a wild final minute of the first half.

Just one snap earlier, an apparent Kentucky touchdown was waved off by an alleged knee down at the 1 – a call confirmed back at SEC headquarters in Birmingham – preserving Auburn’s 8-7 lead at the time.

And then there was the Malzahn trick play, which may be the most fitting 2020 call of the day. After matching Kentucky’s first touchdown, Auburn ran a swinging gate play – the kind that rarely works in middle school – for a two-point conversion.

This was an impressive Auburn victory. While the Auburn roster may be deeper, Kentucky’s is seasons-tested. The matchups, the loss of spring practice and a rebuilt Auburn offensive line made an upset bid viable.

But Auburn, with the dual-threat Nix and a typical Kevin Steele defense, destroyed that notion with a dominant finish.