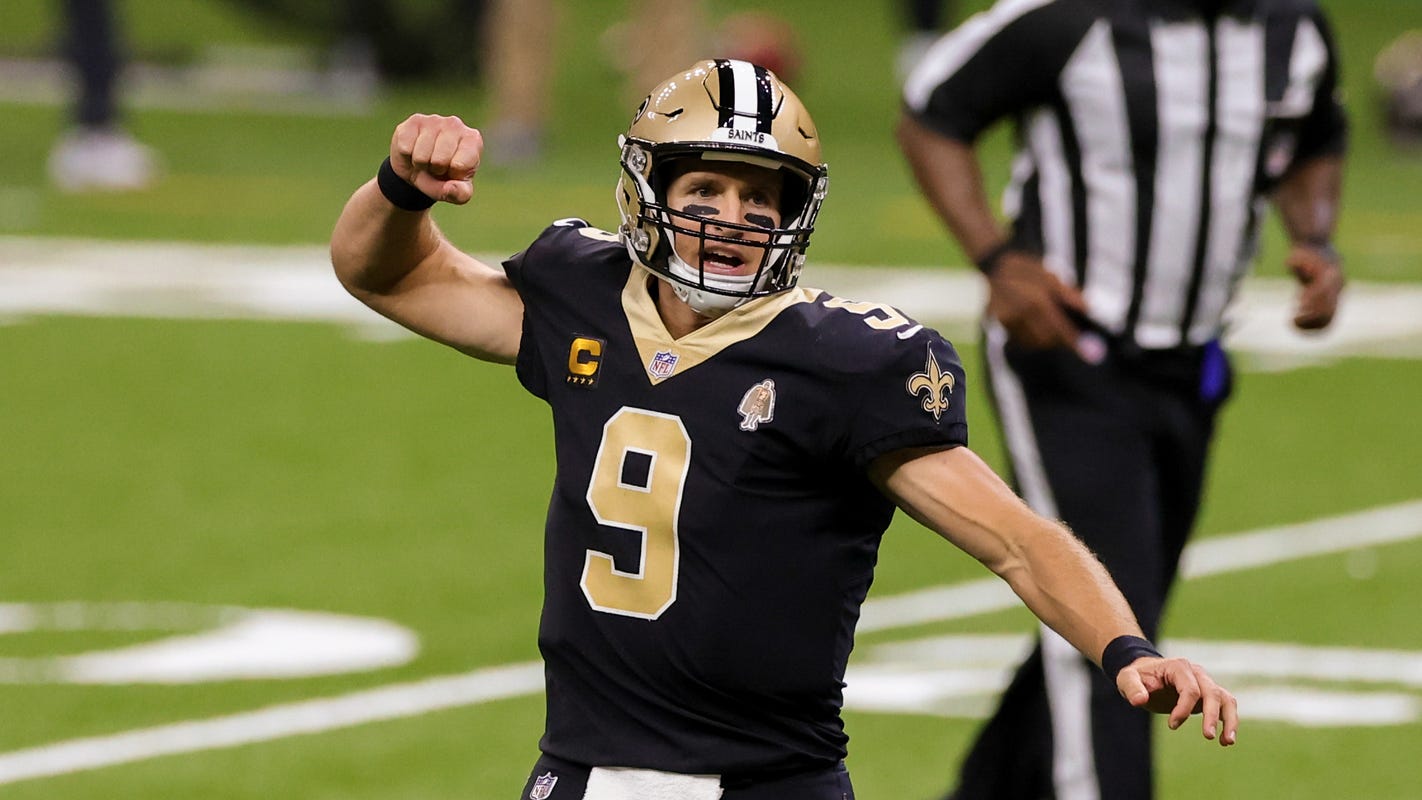 Drew Brees insists that he still has the juice, that contrary to the trending narrative and unimpressive numbers, he does not feel like his 41-year-old body has checked out on him.

Just know that it is far easier for the New Orleans Saints quarterback to convince himself of that than to win over the assorted critics – TV analysts, Twitter experts, man-in-the-armchair — lining up to declare that he is washed up. An even tougher task, though, looms on Sunday night when the red-hot Green Bay Packers (2-0) come calling at the Superdome, sans the natural crowd noise.

The Packers bring the NFL’s No. 1-ranked offense, with all of those yards producing a league-high 42.5 points per game. Brees, the all-time leader for passing yards and scoring strikes, can relate to that. He’s been in the thick of similar zones with the prolific Saints offense.

Yet the essential question now: Can Brees and Co. keep up with the Packers?

Whatever Brees declares about his physical condition can be proven to some degree with a monster game against Green Bay. It’s the perfect opportunity to silence the critics and prove that he’s not washed up. At least until next week. But if the performance resembles what’s been display during the first two weeks of the season – Brees’ average of 4.82 air yards per pass is the lowest after two games since Brett Favre in 2009 — the Saints (1-1) will be in for a long night.

Sean Payton, the offensive whiz who has for so long been tethered to Brees, is hardly throwing his quarterback under the bus. Payton points to the bigger picture, lamenting the lack of precision that has long been a hallmark for the effectiveness of the offense.

The absence of all-pro receiver Michael Thomas obviously hurts. Not only did Thomas set the league record with 149 catches last season, in three-plus years he has been the quintessential go-to target for Brees, the disciplined route-runner to count out being in the right spot. They have put the work in over the years, with Thomas being as particular as his quarterback about the details. Without Thomas, ruled out for a second game on Sunday night due to a high ankle sprain, the hit-or-miss chemistry with Emmanuel Sanders, Tre’Quan Smith, Taysom Hill and Jared Cook was on full display during Monday night’s loss at Las Vegas.

Brees dismisses his lack of downfield prowess as a function of operating within the offense. He says his job is to throw the ball to the open targets, who apparently aren’t getting open deeper downfield this season – or are being missed when they do. It surely happened in the past. Yet you can’t ignore the sliding completion (64.7%) and efficiency (93.5) rates. And part of the equation is that Brees isn’t forcing the issue with defenses as he’s attempting way fewer aggressive throws down the field, which undoubtedly fuel critics.

The Saints have had early-season struggles on multiple occasions in recent years, yet typically worked through it, with the offense finding the precision and timing that made the foundation for long winning streaks. Giving Brees and his unit the benefit of the doubt, maybe that happens again.

But for an aging quarterback with a ticking clock, the questions and the heat will intensify if Brees doesn’t give his team a spark when it needs it the most.

Other items of interest as Week 3 rolls on in the NFL:

Josh Allen. Look who leads the NFL in passing yards? The Buffalo quarterback. Kids, this used to happen when Jim Kelly triggered the Bills K-Gun offense. Now Allen, off to a sizzling start with 363.5 yards per game, is showing more promise as the franchise’s best passer since Kelly. Sure, it has only been two weeks and a major test comes on Sunday against a Rams defense that features the pass-rushing heat of Aaron Donald, but if you remember the recklessness that Allen exhibited in the playoff loss at Houston in January, it’s striking that the third-year pro has an efficiency rating of 122.8 and hasn’t thrown an interception in 2020. And you can believe he’s loving the presence of new acquisition Stefon Diggs.

CONTENDER OR NOT?Separating NFL’s best 2-0 teams from the rest

0-2 TEAMS:Who still has hope to turn season around and reach playoffs?

Dan Quinn. The worst loss of this young NFL season clearly belongs to the Falcons after several members of the so-called “hands team” stood around and watched the football on the onside kick that was Dallas’ miracle – and impetus to an improbable victory. What horrible preparation. Makes me wonder: Why don’t Bill Belichick’s teams commit such boneheaded blunders. Quinn, the Falcons coach, was on the hot seat last year and saved his job with a five-game winning streak to close the season. But after last week’s debacle, which prompted Falcons owner Arthur Blank to question whether the players knew the rules, the heat is on Quinn again.

J.J. Watt vs. T.J. Watt and Derek Watt. Three brothers will be on the same NFL field? Well, it happened last year for a Steelers-Bills contest that included Tremaine, Terrell and Trey Edmunds. But it is so rare. Before last year, it hadn’t happened since 1927. In Sunday’s subplot at Heinz Field, where the Texans (0-2) will be desperate for an upset, it’s striking that for all of J.J.’s accomplishments as three-time NFL Defensive player of the Year, it’s actually T.J. who enters the game tied for the NFL lead with 2 ½ sacks and was AFC Defensive Player of the Week. And, well, fullback Derek hasn’t lost since joining the Steelers (2-0) as an offseason free agent signing.

With Saquon Barkley lost for the season with a torn ACL, replacing the production and instant big-play threat that the star running back provided is something of a pipe dream for a Giants team that has scored the fewest points (29) in the league. After Barkley went down at Chicago, Dion Lewis (5-8, 185) filled in an averaged 2 yards per run. Lewis is more of a receiving threat. Devonta Freeman? The G-men just signed Freeman, but unfortunately this isn’t 2016, when he had his last 1,000-yard season. In the years since, he’s had his share of injury issues. Coming off the street, it could take Freeman a while to get into a flow. Wayne Gallman is another option on the roster, who played three snaps in Week 1 and was inactive in Week 2. What a crisis for new O-coordinator Jason Garrett.

Cee Dee Lamb. The first-round pick is already flashing as the star the Cowboys envisioned, making some tough, acrobatic grabs and clutch plays while leading all rookie receivers with 11 receptions through two weeks. He posted his first 100-yard game in Week 2 and set up the game-winning field goal. Technically, Lamb is Dallas’ No. 3 receiver behind Amari Cooper and Michael Gallup. Yet Lamb and Cooper were both targeted nine times against the Falcons. It’s apparent that Dak Prescott will have the luxury of exploiting favorable matchups and finding the  hot hand on a week-to-week basis.

Raiders at Patriots. It used to be so rare for a Bill Belichick team to suffer back-to-back losses. But it happened twice last season…and twice in 2018. It could happen again, with the Raiders offense hitting an early stride (34 points per game) that includes Derek Carr’s efficiency and slashing runs from Josh Jacobs. It figures that, unlike the Saints on Monday night, Belichick will figure out a way to contain tight end Darren Waller. Whether that’s enough with an undermanned defense is pending. A shootout beckons, especially with Cam Newton reminding the football universe in the close loss at Seattle that he is still a lethal passer, too. Let’s hope it doesn’t come down to a bogus call like the “Tuck Rule” drama.

If the playoffs were today

Through two weeks, teams from the NFC West are a combined 7-1, the best mark of any division. It begs the question: Can all four NFC West teams make the playoffs? Mathematically, it’s possible with the playoff field expanded this year to seven teams and three wild-card slots per conference. Yet it’s still unlikely. At the moment, the NFC West team that advanced to the Super Bowl last season, injury-stung San Francisco (1-1), would be the odd squad out.

While it’s easy to be enamored with the impact of second-year quarterback Kyler Murray on Arizona’s 2-0 start, the Cardinals defense is on the upswing. Arizona leads the league in third-down defense, allowing a paltry conversion rate of 26.1% (6-of-23). Last season, the unit ranked 30th in the NFL with a 46.7% and was dead-last in first downs allowed (375). What a great formula as Vance Joseph builds his defense in his second year as coordinator: Get off the field. Give the football back to Kyler.

Russell Wilson heads into the showdown against Dallas as the NFL’s top-rated passer (140.0) and leader with nine TD passes. He joins Patrick Mahomes, Drew Brees and Peyton Manning as the only passers with nine scoring strikes through the first two games.