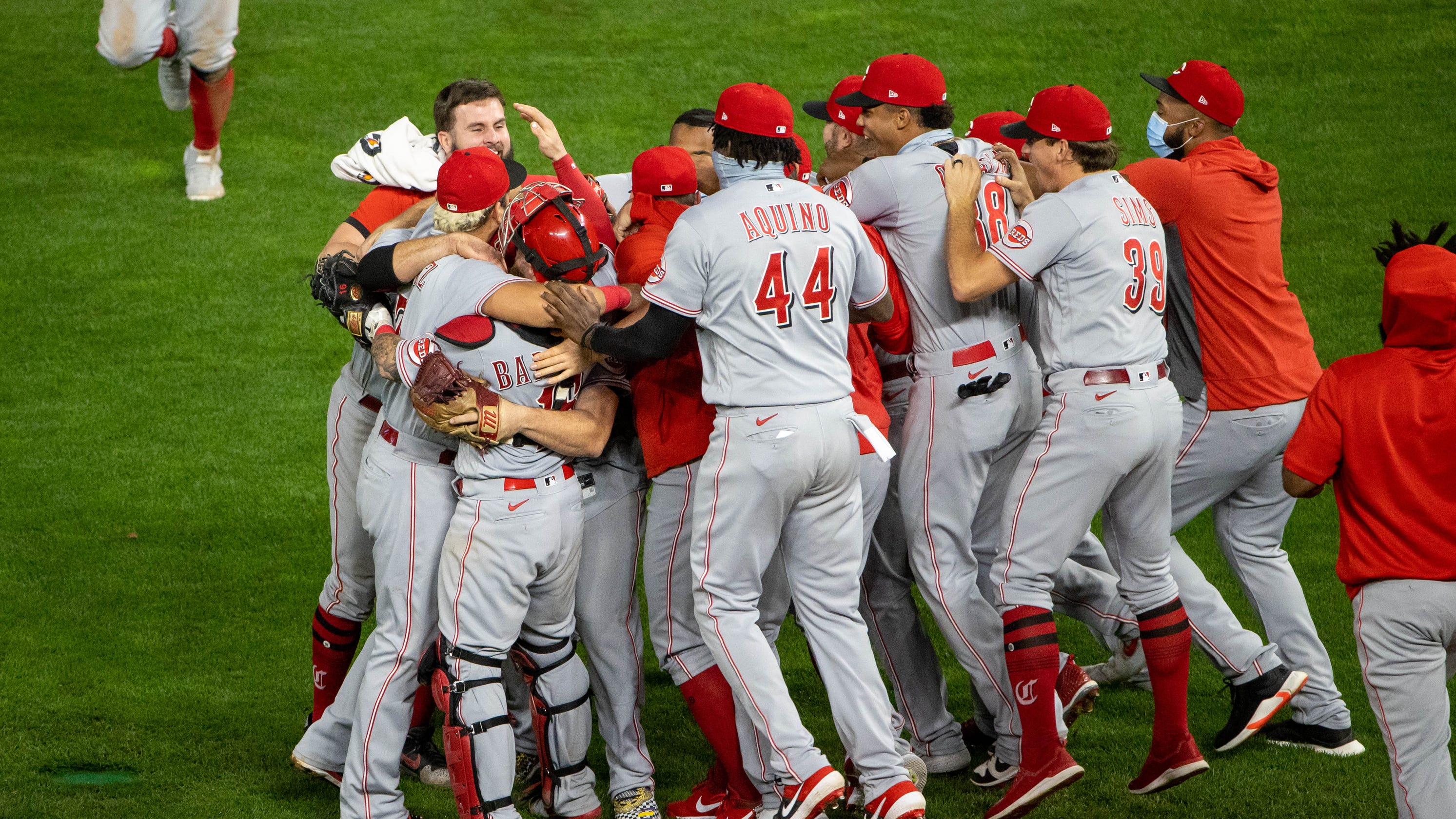 Once Wade Miley fielded a ground ball and threw to first baseman Joey Votto for the final out Friday, Cincinnati Reds players jumped over the dugout railing and mobbed each other at the mound.

The Reds are headed to the postseason for the first time in seven years after they beat the Minnesota Twins, 7-2, at Target Field. In two weeks, they went from a team that had the fourth-worst record in the National League to playoff bound.

Players hugged afterward. There were tears in the clubhouse. They put on MLB’s playoff T-shirts that read, “Respect Cincinnati.” They posed for a team photo, then celebrated with champagne, cigars and other adult beverages.

“We’re better,” said Joey Votto, the only holdover from the Reds’ 2013 playoff team. “We’re good and we’re better. I like this team much more than I liked those (playoff) teams and I really liked those teams. I think we’re a (bleeping) nightmare and I think everybody knows that. I can’t wait.”

The Reds needed three things to clinch a playoff spot Friday: a win, a Philadelphia Phillies loss and a Milwaukee Brewers loss. The Phillies lost, 6-4, to the Tampa Bay Rays. The Brewers lost 9-1 in the second game of their doubleheader at the St. Louis Cardinals.

The stars aligned and the Reds’ scoreboard watchers knew they were in a position to clinch with a win around the sixth inning when they had a 4-2 lead.

“The out-of-town scoreboard was right in my view,” manager David Bell said. “I couldn’t stop watching it, actually, between pitches. Really, I wasn’t even sure if our team knew exactly what had to happen for us to get in tonight, but once we got into the later innings, it became pretty obvious.”

The Reds were six games under .500 on Sept. 12. By some projections, their playoff odds were as low as 9.8%. They had to play close to perfect to save their season – and somehow, they did. They’ve won 10 of their last 12 games.

They had dominant pitching in the last two weeks. Their offense came up with timely hits. They shored up their defense.

“I honestly really don’t know how that happened,” Shogo Akiyama said through a team translator. “But I knew from the start that the individual talent was there.”

Said Eugenio Suárez: “You just trust that good moment is coming at some point. Today, we did it. Not only for us, not only for Cincinnati Reds organization, we did it for all the city of Cincinnati. We did it.”

[ SPORTS FAN? Subscribe today to get unlimited access to all of The Enquirer and Cincinnati.com’s coverage of your teams. ]

[ TAKE THE GAMES WITH YOU: Download the Cincinnati.com Sports app. ]

It was a fitting clincher for the Reds. Nothing was easy. But whenever they had their backs against the wall, they played their best baseball.

“Every team goes through tests and challenges,” Bell said. “It seemed like we had a lot of them. Our team never gave up. It’s easy to say that, but when you live it and watch it happen, it’s pretty special when things aren’t going your way, and you just stay after it and continue to believe in it, believe in each other.”

The Reds’ front office, tired of rebuilding, signaled their intention to push their chips forward in 2020 when they traded their top-rated prospect, Taylor Trammell, for Trevor Bauer at the trade deadline last summer. Bauer had 1 ½ seasons remaining on his contract, so they knew they were on the clock.

During the winter, the Reds committed $165 million to sign free agents Mike Moustakas, Miley, Akiyama and Nick Castellanos. They spent more money last offseason than they did in the last 10 years combined.

Moustakas, who quickly became a clubhouse leader, hit two home runs Friday. He hit a go-ahead, two-run in the fourth inning that dropped a few feet out of Twins center fielder Byron Buxton’s reach. Moustakas pumped his right fist as he rounded first base. There were shouts from his teammates in the dugout. The Reds led the rest of the night.

In the top of the ninth inning, Moustakas opened with a solo homer down the right-field line. The Reds scored three important add-on runs to put the game out of reach.

“This is a big step for us because a lot of people doubted us, man,” Amir Garrett said. “It was time for us. We were talking the talk and now it’s time for us to walk the walk. Now that we’re in, it’s time to go, man. I truly believe that we have a legitimate shot at this because our team is scary.”

This was the first time many Reds players experienced a playoff race. Catcher Tucker Barnhart, the second-longest tenured player, said Wednesday’s 6-1 win over Milwaukee was the biggest game he’s played in his career.

It was a playoff-or-bust season considering the front office’s moves geared for this year, but players are hopeful this is just the beginning of their playoff window.

“We want this to be the norm from here on out,” Lorenzen said. “It’s awesome. I can’t explain the feeling, but it’s awesome.”

Said Garrett: “I want to cry right now, but I ain’t going to cry, though, because we happy right now.”

Votto, who turned 37 this month, had to play through an entire rebuilding process. There were no important games in September. There was hope that days like Friday would return, but he doesn’t have to dream about it anymore.

His “nightmare” team is headed to the postseason and they’re confident they can beat anybody.

“I’m so happy,” said Votto, who wanted to thank all the people behind the scenes in the organiza. “People are crying in there. People are smiling. People are hugging. It’s a meaningful moment because it can be sort of thing you only get once. But it’s also the sort of thing you can talk about for the rest of your life. That’s what I think we’re trying to do this year.”