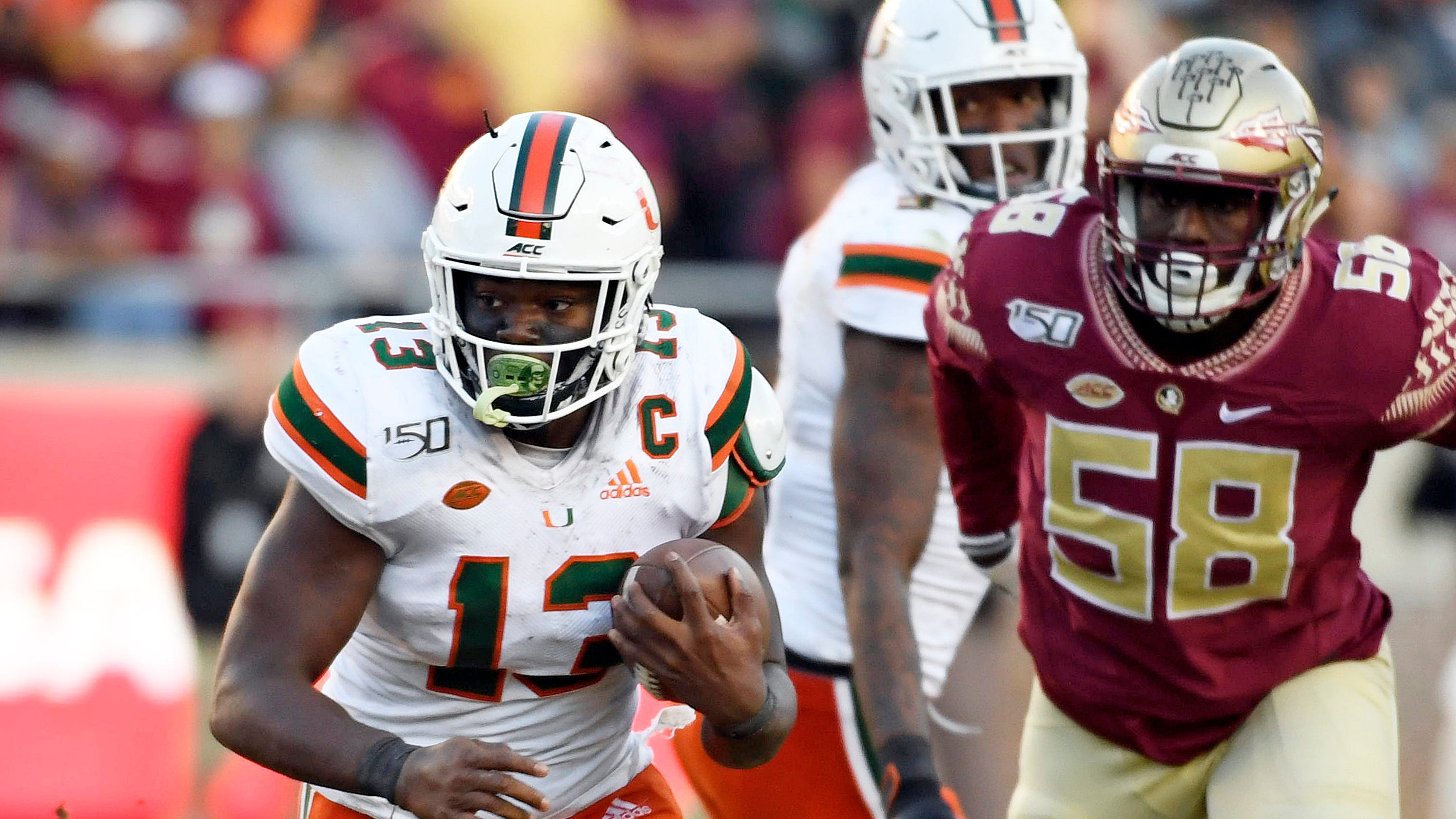 Amari Carter was a bit reluctant to answer.

“Growing up in South Florida, who did you root for?” he was asked about the Miami-Florida State rivalry.

“Did you ask who I rooted for?” he said with a nervous laugh.

“Growing up, crazy, I was on the other side of the game,” he said, again, not able to hold in that laugh. “But I didn’t know any better.”

More likely, Carter didn’t have a choice, not with a mom and an uncle and cousins who attended Florida State.

In the Carter household, the Tomahawk Chop was a staple on fall afternoons. Throwing up “The U” was about as welcomes as, well, a hurricane … or a Hurricane.

Carter has flipped his household, just as Miami has flipped this series. The senior will play in his fourth game in the rivalry Saturday when No. 14 Miami (2-0) and Florida State (0-1) meet at 7:30 p.m. at Hard Rock Stadium, and he doesn’t know what it’s like to lose to the Seminoles.

Of course, that’s rare in the past decade. Before Carter arrived, Florida State won seven straight in a series that has lost its luster after being the marquee rivalry in the country for so many years. But it’s still a series of streaks, and now Miami has the upper hand as a double-digit favorite.

To Diaz’s point: Since 2000, this series has produced 16 one-score games, the most in the FBS.

Diaz, as much as anybody, embodies why this series is so personal to so many. The Miami native not only got his coaching start at Florida State as a graduate assistant, but the degree he may or may not have hanging on his wall is from Florida State.

BOLD PREDICTIONS: For Week 4 of the college football season

WHO WILL WINS?: USA TODAY Sports staff picks for Week 4

Florida State has 16 players on its roster from South Florida, including three who could hear the roar outside their windows growing up in Miami Gardens, where the Hurricanes play their games.

Miami’s roster includes redshirt junior linebacker Bradley Jennings Jr., who was also on “the other side of the game.” Until he wasn’t. Jennings’ father was a standout Florida State linebacker from 1998-01. To confuse the family even further, Bradley’s brother Branden, a senior linebacker at Jacksonville-Sandalwood, has decided to follow his father and not his brother. He’s is verbally committed to FSU.

Even Hurricanes quarterback D’Eriq King, the transfer from Houston who has transformed this offense, has a link to FSU. King was at Westbury Christian School his freshman year in high school. His Westbury football coach was Charlie Ward, the Heisman Trophy winning quarterback from FSU.

“He used to talk about it all time,” King said of the rivalry.

The matchup still means something to someone even if it hasn’t been relevant nationally for most of the past 15 years. Why else would ABC make it the prime-time game and have GameDay take its act to South Florida even after Florida State flamed out in its opener, blowing a double-digit lead at home to Georgia Tech?

First it was Miami that was not holding up its end, entering unranked seven times between 2007 and 2015. FSU wasn’t very good either during the late 2000s before surging under Jimbo Fisher and winning the 2013 national championship. Three times from 2007 to 2011 neither team was ranked. The 2007 game broke a streak of 30 years in which one or both were ranked, including 13 times both were in the Top 10.

FSU TO FANS IN STANDS: Get tested and put on a mask or leave

SEC IS BACK: 10 questions facing league as its season gets started

FSU coach Mike Norvell knows about the rivalry as an outsider. When he was named coach in December, he knew the importance of this game — and the one against Florida. Now, he will not coach in either.

Norvell tested positive for COVID-19 late last week, forcing him to remain in quarantine this weekend. The UF game was lost after schedules were reworked because of the coronavirus pandemic.

“This game is one of the great games in all of college football,” Norvell said. “When I got this job, this game, Florida, those are each-and-every-year games that mean so much to so many.

“Not being able to be active during the 3 1/2 hours the game is going to be taking place, it’s going to hurt.”

Norvell has been involved in the game plan, working remotely with assistant Chris Thomsen, who will assume the role of head coach Saturday; and offensive coordinator Kenny Dillingham, who is calling the plays. He has also watched practices from his home.

“I’ve got kind of a little bit of an insider feel of some of the old rivalry games with Florida State and Miami, from watching it from afar,” Thomsen said. “I’m really excited to be a part of that. I can’t wait to feel the energy of that game and the competitiveness of that game.”