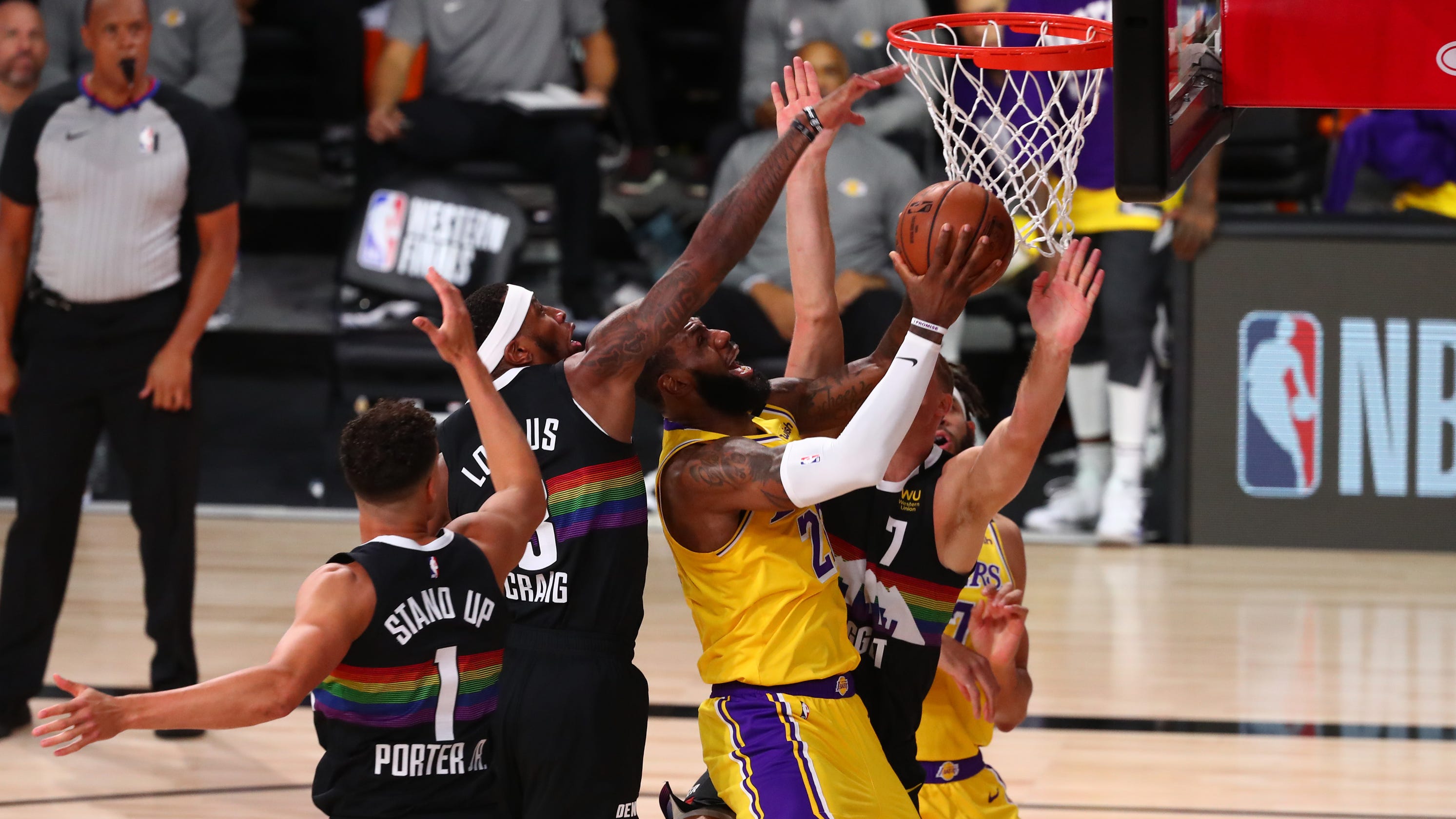 Denver Nuggets’ frustrations are plentiful after Game 4 loss to Lakers

Scan anywhere on the box score, and the numbers will upset the Denver Nuggets.

The most obvious points to the score itself – the Nuggets’ 114-108 loss to the Los Angeles Lakers on Thursday in Game 4 of the Western Conference finals. But the Nuggets are not just upset they face a 3-1 series deficit for the third consecutive playoff series.

Regardless of their confidence to overcome any obstacle — the Nuggets are already the first team to overcome two 3-1 series deficits in the same postseason — Denver became frustrated with how this latest challenge came to be.

Not only did the Lakers’ have six players hit double figures in Game 4, but they also dominated the Nuggets on the boards (41-33), the offensive glass (12-6) and second-chance points (25-6).

“This is the Western Conference Finals, Game 4. If you can’t help us on the defensive end, maybe you shouldn’t be on the floor,” Nuggets coach Mike Malone said. “We have to be able to lock in, finish with a rebound. We had too many empty possessions tonight.”

THIS IS WHY THEY GOT HIM: Anthony Davis has been clutch for the Lakers

Denver had so many empty possessions that Malone attributed those numbers as the main reason for the loss. “Almost all of it,” he said. But as he played back the game in his memory and scanned the box score once more, Malone noticed another number that disturbed him.

The Lakers went 28-of-35 from the free-throw line, while the Nuggets went 20-of-23. LeBron James made 11 foul shots out of 14 attempts a day after the Lakers presented a case to the NBA that he was not receiving enough free throws during the series. He had shot just two foul shots in a Game 3 loss to Denver, and had shot a combined 10 in the first three games.

“I think I’m going to have to go through the proper channels like they did,” Malone said, “to see if we can figure out how we can get some more free throws.”

Denver had expressed similar frustration following its Game 1 loss. Then, the Lakers went 27-of-37 from the stripe, the while Nuggets shot 23-of-28. Though the Lakers (28 fouls) and Nuggets (26) drew whistles relatively evenly, Denver became frustrated the Lakers shot 24 foul shots off of their 16 fouls in the second quarter alone.

“LeBron is going to go get his. But we just have to look ahead and play through it,” Nuggets guard Jamal Murray said. “We’re the younger team, youngest team, whatever we are. Look at where we’re at. We’re going to have to earn their respect if we’re going to want to prevail.”

Amid the Nuggets’ frustration about the calls, do they believe it actually affected the outcome?

“I don’t know. I just know they went 35 and we went 23,” Malone said. “I think late in the game Jamal Murray attacked the basket a few times where it appeared to be contact. We’ll watch the film and send our clips in. We’ll reach out to the NBA and kind of make our points noted. Whether them going through the proper channels affected tonight or not, I have no idea. The NBA does a great job of listening. You hope that next game maybe some of those fouls are called. But once again, this game had nothing to do with that.”

Instead, the Nuggets believed it had everything to do with their lack of physical play and hustle on the boards. Despite Murray (32 points), Jerami Grant (17) and Jokic (16) cracking in double figures in scoring, no one on the team cracked double figures in rebounding. Malone observed that Dwight Howard “did whatever he wanted” before finishing with 11 rebounds, including six on the offensive end. “Nobody touched him at all in that first quarter,” Malone said.

What will it take for the Nuggets to improve those numbers? “We need to box out, of course,” Jokic said.

With Jokic and Paul Millsap both picking up five fouls, however, the Nuggets played tentatively. Lakers coach Frank Vogel, who started Howard for the first time all series, also has other front-court players in his rotation, including Anthony Davis, JaVale McGee and Markieff Morris.

“We’re just trying to be physical, trying to be physical and not pick up fouls,” Murray said. “Dwight Howard, he’s actually just trying to muscle his way in, not caring if he gets called for a foul because they have how many bigs over there. Joker is trying to do his part without fouling. The guards have to rebound more. Only had three rebounds today. I got to get in there and be more physical, even take a couple. I don’t think I had any fouls. I just got to go and hit somebody, try to help my teammates out.”