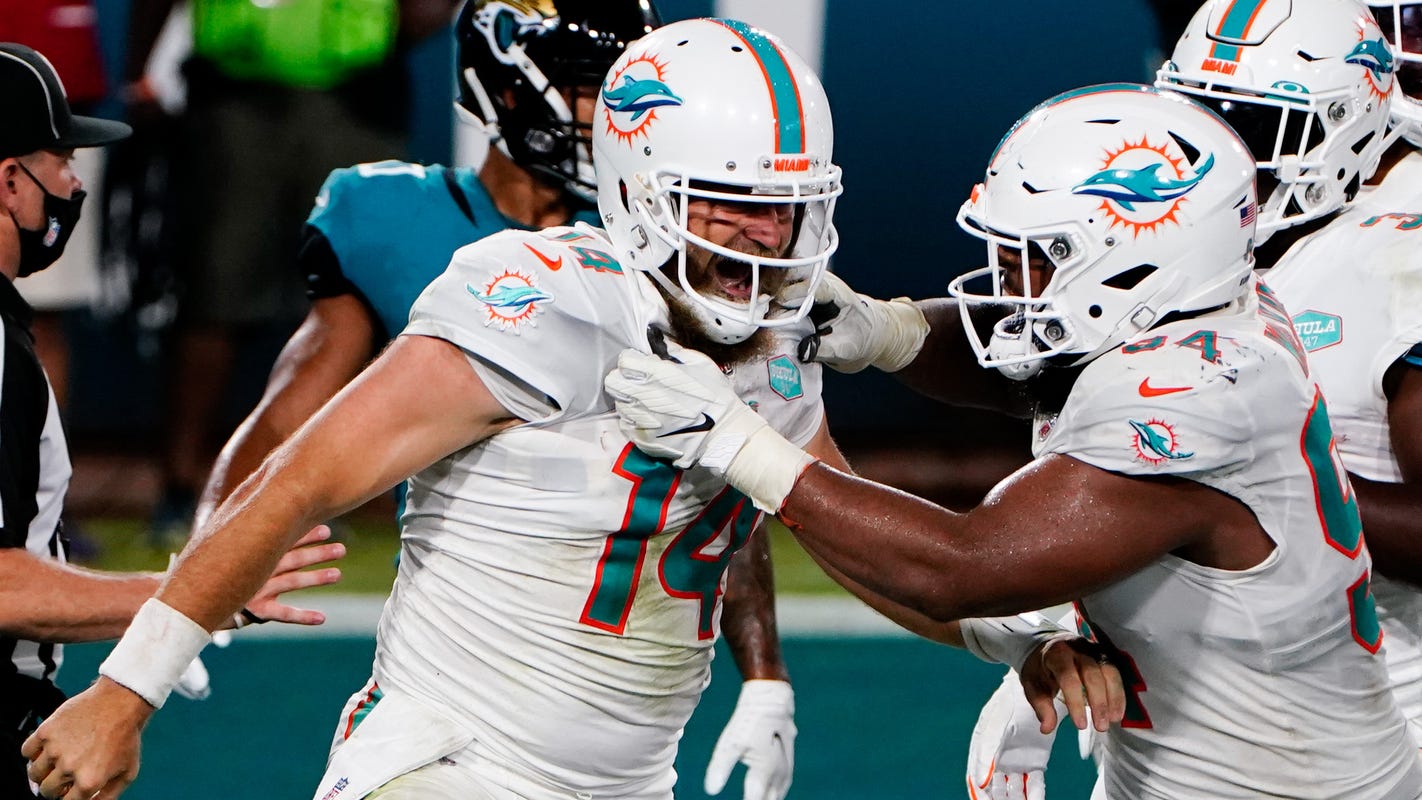 Is it Tua time yet? Ryan Fitzpatrick answered that vs. Jaguars on TNF

JACKSONVILLE — The year is 2024. Ryan Fitzpatrick’s beard is really, really long. On an ESPN pregame show before a Miami Dolphins game, a graphic reads: “Is it Tua time yet?”

We kid. But after listening to almost every former NFL player in league history address the subject on cable television throughout the day, the question was answered quite clearly, for now, and for a national audience.

No, it is not Tua time yet. There’s still magic in that beard. And that right arm.

It’s so hard to win on the road on Thursday Night Football. For years, it’s been nearly impossible for the Dolphins to avoid humiliation on prime time.

For one night, at least, it all went Miami’s way. At the age of 37, Fitzpatrick led Miami to an upset (how Jacksonville was favored by 3 points is still a mystery to me), in which he was nearly perfect.

Of course, the thing about Fitzpatrick that’s most endearing is how he’s not perfect at all. Not his arm. Not his accuracy. Not his mobility. Not his decision-making.

And yet Fitz, all of Fitz, is a special blend. He is so humble and self-aware about his short comings. And he is one of the most popular teammates a Dolphin has ever had.

He’s popular because he’s smart and selfless and fearless.

“I love this man Ryan Fitzpatrick,” injured Dolphins linebacker Vince Biegel tweeted during Miami’s 31-13 win. “Puts it on the line every week.”

I love this man Ryan Fitzpatrick. Puts it on the line every week.

On a third down in the first quarter, Fitzpatrick tucked and ran through the middle of Jacksonville’s defense and made it. As if there was any doubt.

On a third down in the second quarter, Fitzpatrick ran for it and tried to run a linebacker over. On fourth down, Fitzpatrick called a bootleg — and made it, of course.

“Fitz is out of his mind,” tight end Mike Gesicki said. “To have him as our leader and to see the fun that he has, it’s so fun.”

He shows younger players the right way to play the game. He doesn’t just talk about it.

As bad as Fitzpatrick was against New England, he was good against Jacksonville.

Fitzpatrick threw a rope to DeVante Parker for a big gain. He found Preston Williams for a short touchdown pass.

Fitzpatrick threw another rope to Parker, on a comeback, showing his arm is not worthy of Drew Brees criticism. And he threw it high to Mike Gesicki for a touchdown, where only Gesicki could catch it.

Fitzpatrick has lifted Gesicki up, something the tight end will always be grateful for. And Parker, too. And Isaiah Ford. He makes everyone around him better.

“I feel like the luckiest guy in the world being able to go out and play football with my friends,” Fitzpatrick said.

Early in the second half, Fitzpatrick called his own number, for a quarterback draw and touchdown. It was a magical night for Fitzpatrick.

Yes, the beard was better than the moustache. Gardner Minshew of the Jaguars may be a version of Fitzpatrick, with his guile and effervescence, but a less advanced model.

Even Fitzpatrick does not know how much longer he’ll play (this certainly could have been his last-ever primetime game). This has been an emotional year, as Fitzpatrick lost his mother shortly before the start of the season.

Fitzpatrick plays football with unbridled joy and passion. The field and the game is his refuge from any and all worries. He also plays with swashbuckle and smarts.

Tagovailoa could be seen between series, asking Fitzpatrick questions, and Fitzpatrick, of course, was fully engaged. This is the perfect scenario.

The Dolphins tanked for Tua Tagovailoa, and they got him. Perhaps the Jaguars should follow through with a highly logical strategy to Tank for Trevor (Lawrence).

But, though the Dolphins have proclaimed Tua and his hip healthy, there is no reason to insert him in a game before it is truly necessary. Some have seen fellow rookies Joe Burrow and Justin Herbert flash greatness.

And yes, at some point, Tua will be expected to flash greatness, too.

But all of these moments are benefitting Tua now. He is essentially enrolled in NFLQB101. And on Thursday, Tua got to see a class leader at the very top of his game.