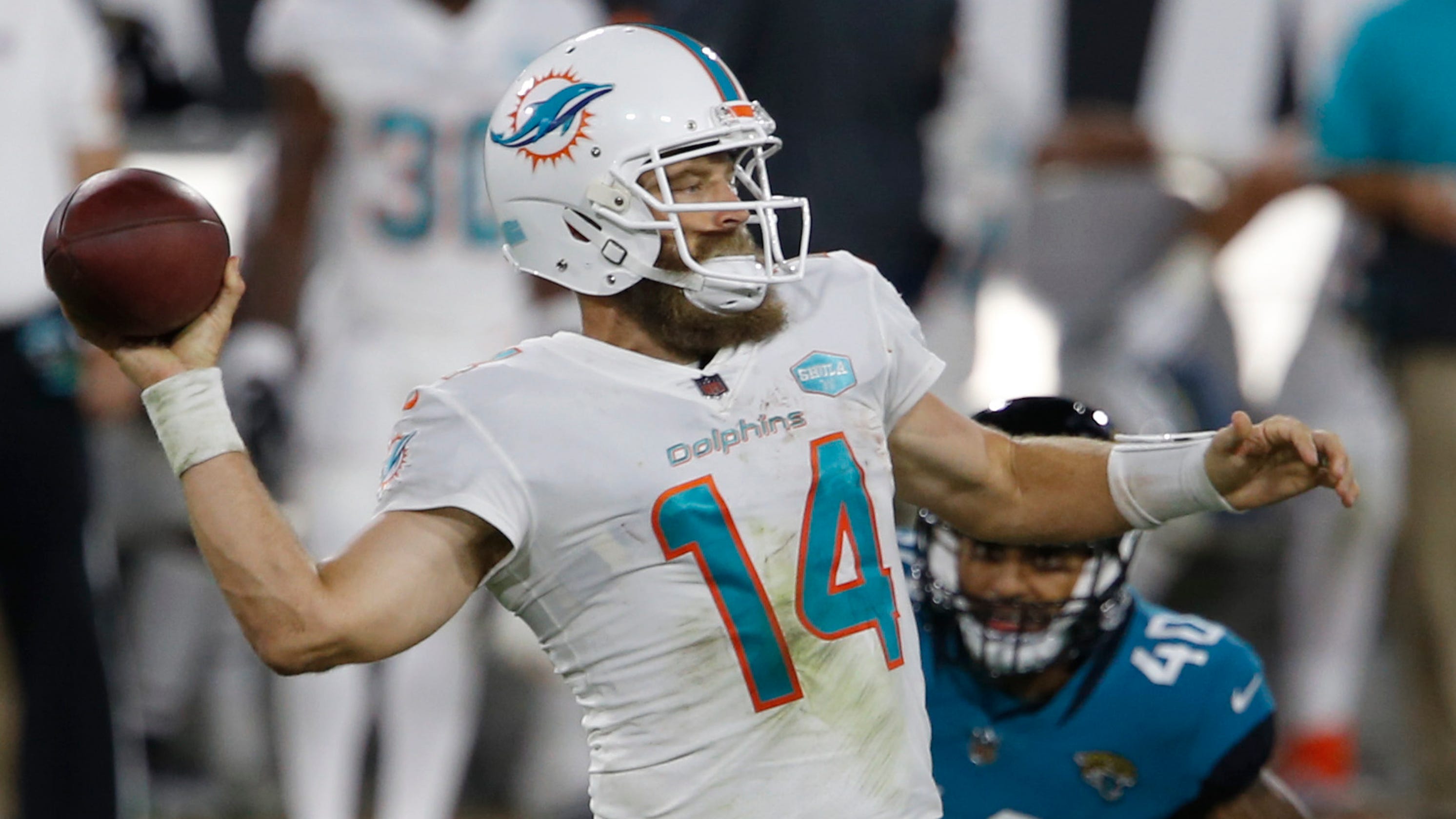 The Thursday night jinx is over.

Ryan Fitzpatrick came out on fire as the Miami Dolphins jumped to a 14-0 lead en route to a 31-13 victory over the host Jacksonville Jaguars on Thursday night.

Fitzpatrick enjoyed an early stretch of remarkable accuracy and finished with two touchdowns passing and one rushing.

The Dolphins had been handily beaten in their previous four “Thursday Night Football” appearances and had to travel for this one but recorded their first win of the season, improving to 1-2 and earning a few days of rest before preparing to play host to the Seattle Seahawks on Oct. 4. The Jaguars, meanwhile, fell to 1-2.

Key takeaways from the game:

1. Patience, Tua fans: They were ready to write Fitzpatrick’s career obit after that three-interception opener.

Look at him now.

Fitzpatrick connected on his first 12 passes (including two touchdowns) and had a streak of 21 completions dating back to the Bills game. In short, he was nearly perfect as the Dolphins came storming out of the gate and led 21-7 at halftime.

In the second half, he caught one of his own (deflected) passes to finish with one reception on one target. (Amazing all the stuff you can discover hidden in that beard. Much more than a mustache.)

Fitz was playing like a 37-year-old man who knew he wouldn’t have to suit up again for 1 1/2 weeks. He was throwing his body around and taking hits, seemingly determined to make sure if Myles Gaskin is going to wrest his team rushing title away, he was going to have to work for it.

POWER RANKINGS: Ravens replace Chiefs for No. 1 spot after Week 2

Fitz is on FIRE.

2. Line coming together … : The Dolphins didn’t just retool their offensive line this season. They blew it up after a poor 2019.

With Jesse Davis the lone holdover and no preseason to get used to working together, you would have expected this unit to struggle early.

Instead, with two rookies starting, the line dominated. If you didn’t know better, you may have thought it was five veterans in sync.

Davis raised eyebrows this week when he said the line had a goal of being “feared” around the NFL. Then Dolphins went out and had drives of 84, 80 and 75 yards in the first half as the line dictated the tone. The blockers protected Fitz and opened lanes for Gaskin. They proved they can get the job done in the toughest spot on the field as Davis and rookie guard Solomon Kindley helped Jordan Howard plow in from a yard out.

Even a holding call on Kindley couldn’t spoil the hope that he and fellow rookie Austin Jackson inspire.

3. … So why not take advantage? Former FAU coach Lane Kiffin keeps binders of tendencies in his office that, he said, make it clear that coaches don’t go for it on fourth down nearly enough. Kiffin believes they coach not to get criticized.

The Dolphins didn’t go for it in the third quarter — and they deserve criticism.

Despite how well the line was firing, the Dolphins faced a fourth-and-1 on the Jags’ 40 but had Fitzpatrick try to draw Jacksonville offside (when’s the last time that worked?). They ended up punting, with Matt Haack continuing his outstanding season.

The strategy worked out perfectly in the end, after Kyle Van Noy caused and recovered a fumble to set up Fitz’s 1-yard TD run for a 28-7 lead. That was good fortune. By not punting, though, you make your own fortune.

Howard gave up a long TD to the Bills on Sunday. OK. Everybody gets beaten now and then.

But Howard was seen playing soft coverage in the first half. In the third quarter, he was able to run step for step deep with receiver Chris Conley but never located the ball and ran right by him. A combination of safety Bobby McCain disrupting Conley, and Conley dropping the ball, prevented a big gain.

Howard had a strange stretch in the closing minutes, getting up from one play and giving the “incomplete” signal even though he’d given up a completion … but following with an interception seconds later. True to how things are going, Howard got up tending to an aching calf muscle.

Byron Jones missed the game with assorted ailments, so it’s going to be into early October at the earliest before we see the bookend corners the Dolphins had in mind when they signed Jones in free agency.

5, Enough with the arm tackles: Van Noy and cornerback Jamal Perry were the most obvious offenders on a Dolphins defense that insisted on attempting arm tackles.

Van Noy has a strange habit of grading reporters’ questions before deciding whether to answer them. He’ll probably face a few questions during the film session.