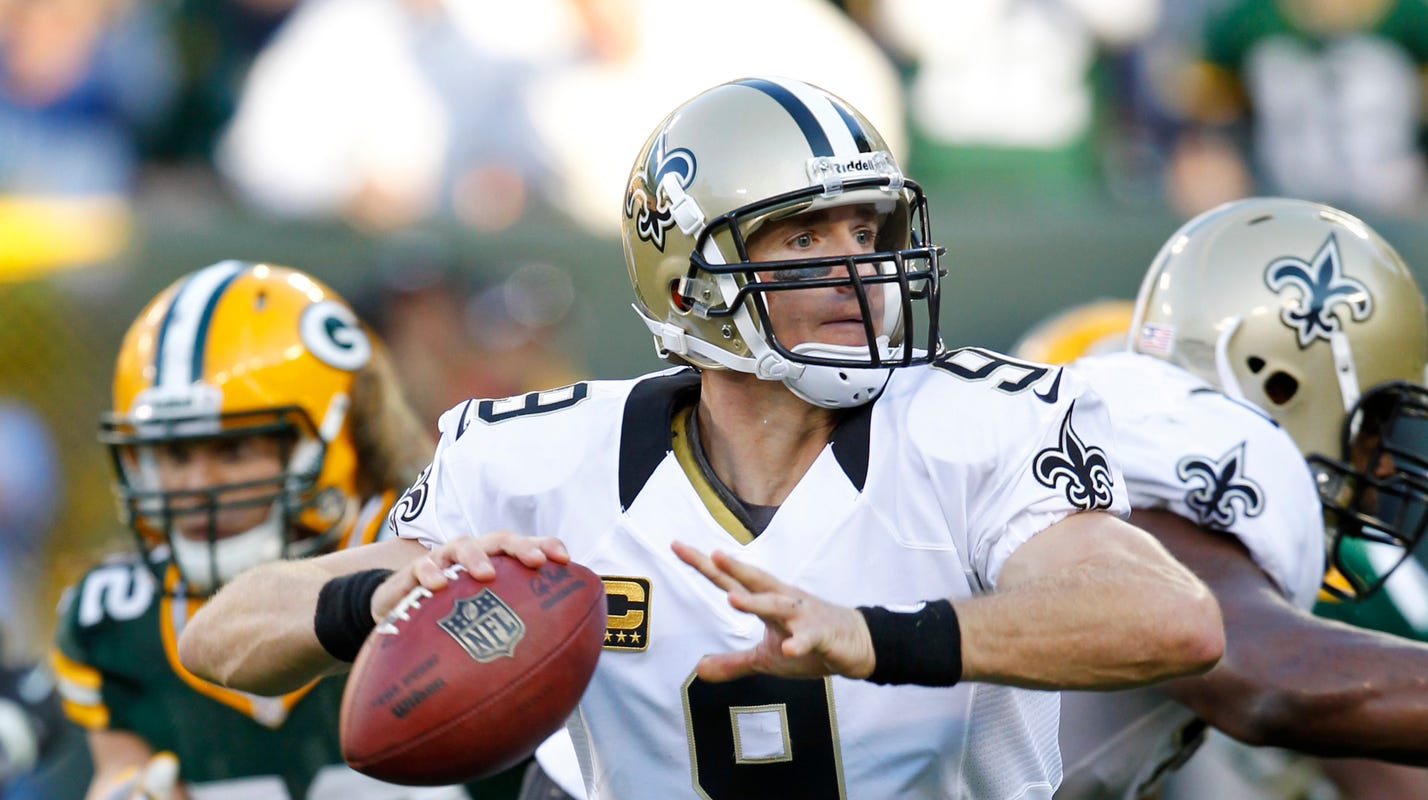 GREEN BAY, Wis. – Through two games, the numbers look like they derive from an impostor. Certainly this is not the stat line of a first-ballot Hall of Famer.

This is not Drew Brees.

The New Orleans Saints legend who has thrown for more passing yards than any quarterback in NFL history, but just 472 this season. That ranks 23rd in the NFL, far below his lofty perch as one of the game’s greatest.

Brees is averaging a paltry 6.9 yards per pass. His 64.7 completion clip is 10 percentage points lower than each of his past two seasons. His 93.5 passer rating ranks 16th in the league, dead average.

There are two possibilities as the Green Bay Packers prepare to play Brees on Sunday night in New Orleans. The first, of course, is what Packers coach Matt LaFleur called an “anomaly” Wednesday. The idea, LaFleur said, is that Brees is simply too good to be taken lightly.

“I still see a guy who is a Hall of Famer,” LaFleur said. “I’ve had the opportunity or misfortune, however you look at it, of going against him many times. There’s a reason he’ll be a first-ballot Hall of Famer. He’s been playing this game for a really long time at an elite level. Any time you have Drew Brees behind center, you have a chance.”

It’s the “really long time” more than “an elite level” that might be more significant this week.

Yes, Brees is undoubtedly a first-ballot Hall of Famer, someone whose fate is already sealed for Canton, Ohio. His 77,888 passing yards are most in NFL history, almost 3,000 yards — or close to a full season’s worth — more than second-place Tom Brady. He has thrown for almost 6,000 more yards — almost two seasons’ worth — than third-place Peyton Manning.

Brees, of course, has also thrown more touchdown passes than any quarterback ever. His 550 are narrowly ahead of Brady’s 544.

Those are counting numbers, and they accumulate over years and decades. Brees, selected in the second round of the 2001 draft, is in his 20th season. He is 41 years old now, closing on 42 in January.

Not that the Packers are willing to admit it.

“Drew is still Drew,” linebacker Christian Kirksey said. “He’s arguably one of the best quarterbacks to play this game. He’s a first-ballot Hall of Famer. So I don’t give into the news or rumors that he’s lost it or this and that. He’s only played in two games this year. I think he’s warming up just like everyone else, and he’s still going to be able to make the same throws that he made in his career.

“I’m not getting into all that. We have to prepare to face Drew Brees, which is an elite quarterback.”

Brees’ first two games have been quite different than the start of Packers quarterback Aaron Rodgers’ season. While Rodgers is in the midst of a potential renaissance in his age-37 season, Brees has shown his age.

The two future Hall of Fame quarterbacks go way back — Rodgers and Brees used to work out together at a facility in San Diego County, California — but have played each other sparingly in their careers. They’ve met as opposing starters just four times, including the Packers’ 2011 opening win at Lambeau Field. The home team has won each of the four, their last meeting a 44-23 Saints blowout in New Orleans during the 2014 season. The Packers also lost 51-29 at New Orleans during Rodgers’ first season as a starter in 2008.

“Both games,” Rodgers said, “I feel like we got kind of smacked.”

Rodgers did not play the last time the Packers hosted the Saints in 2017. That game came one week after Rodgers broke his collarbone in Minnesota, an injury that cost him most of the season.

So Sunday night will be only the fifth time in their careers two of the game’s all-time greats share the field. The question, of course, is whether both can play like all-time greats.

“It’s just a matter of time,” LaFleur said of Brees, “before he gets it rolling like we’re all accustomed to, so I know it’s going to be a great challenge for our defense. I know our coaches are working hard, our players are working hard, and we’ve got to have a great week of prep because this is one of the most consistent — not only him as the quarterback, but one of the most consistent offenses over however many years that he and Sean have been together in New Orleans.

“You can never take that for granted or let your guard down, because as soon as you do he’s going to go out there and dice you and hang 45 on you.”