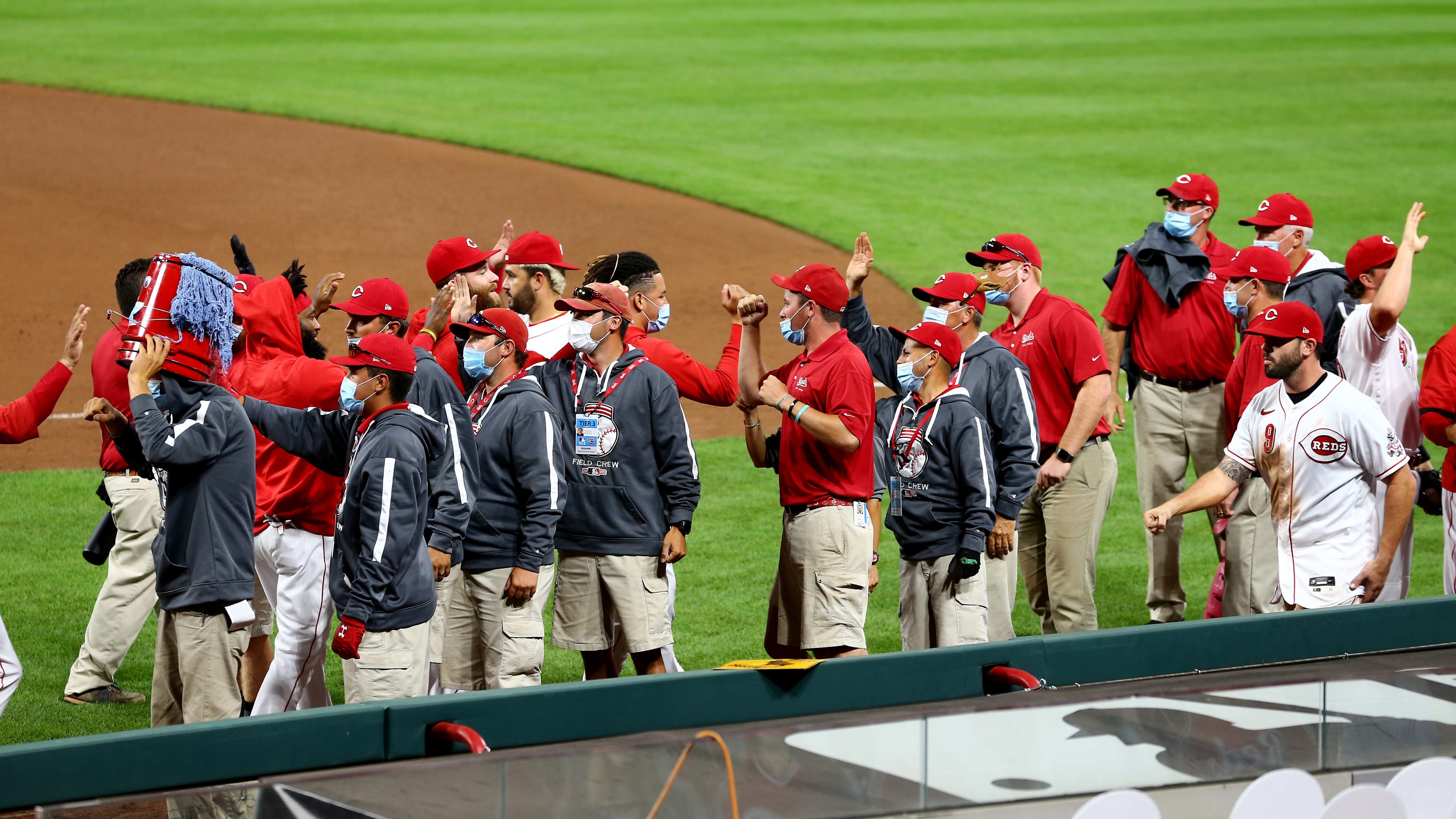 Members of the Cincinnati Reds’ grounds crew represented the Great American Ball Park crowd in a fanless season all year long, cheering from a section behind the team’s dugout by first base.

They played instruments – which Joey Votto bought for them at the beginning of the season. They wore moose antlers and oversized sunglasses. They cheered loudly at every home game, banging “rally buckets” in close games.

After the Reds completed their victory handshake line following Wednesday’s 6-1 win over the Milwaukee Brewers, they tipped their hats to the grounds crew and then high-fived them.

“Just the energy behind it added a ton to our team,” manager David Bell said. “After the game, I’m glad a few of our players thought of it and we went to thank them before heading out on the road trip. Very, very much appreciated. I’m sure it equaled a couple of wins along the way and we know how important those are.”

“I thought, ‘That’s exactly what we want,'” Votto said. “We want the opposing team to hate, be annoyed by them. I think they don’t care in the least. They’ve carried us at times when we need energy, when we need something different. They make noise, they cheer, they talk mess, and they’ve been fantastic all year. We’re going to miss them. Does this ever happen again? I’m not entirely sure, but this was very fun. It was really fun.”

Not all opposing players felt that way. The grounds crew often had humorous interactions with opposing first basemen and first-base coaches. Chicago Cubs star Anthony Rizzo was so entertained by them that he swapped his jersey for a grounds crew polo. Rizzo wrote on his jersey, “Best crew in the league!”

When Pittsburgh’s Derek Holland, a Michigan football fan, pitched against the Reds, one grounds crew member wore an Ohio State helmet and another sat with a Michigan State flag. “These guys are amazing,” Holland wrote on Twitter.

“It’s something that I haven’t seen, but that kind of made it a little fun just to have something,” St. Louis Cardinals shortstop Paul DeJong said. “Always just good energy. It was funny the way they saluted (Paul Goldschmidt). I think they all yelled, ‘Hi, Paul!’”

In a strange season without any fans in the crowd, besides cutouts, the grounds crew provided the Reds with a home-field advantage.

“Having the grounds crew in our corner, I felt like, was a distinct advantage for us because no other city had that,” Votto said. “There were times deep into the game where I felt like, ‘Holy cow, I feel the energy from them.’ They’re there for us. It’s been such a treat. We’ve made the very best of this. There have been so many people behind the scenes that have done such fantastic work that don’t get thanked.

The Cincinnati Reds ground crew is recognized for their work over the course of the season in the fifth inning of a baseball game between the Milwaukee Brewers and Cincinnati Reds, Wednesday, Sept. 23, 2020, at Great American Ball Park in Cincinnati. (Photo: Kareem Elgazzar)

The Reds showed their appreciation for the grounds crew throughout the season. Players pointed at them during home run trots. They joked with them on social media. But they felt it was important to personally thank them after their last home game.

“From the work on the field, keeping it ready, obviously it’s top-notch,” Trevor Bauer said. “But then being there in the stands and the energy they bring every night, the hustle, the foul balls and taking care of the players, taking care of the field, rooting us on, the drums, the energy, it’s a special group. Those guys brought it all year.”

Said Bell: “They just increased their participation as the season has gone on each step of the way. It’s amazing. I would never have thought of that, for sure. It’s made a big difference, just having that support. You can just feel how much they care about it. It’s noise and it keeps a quiet ballpark a little bit lively.”