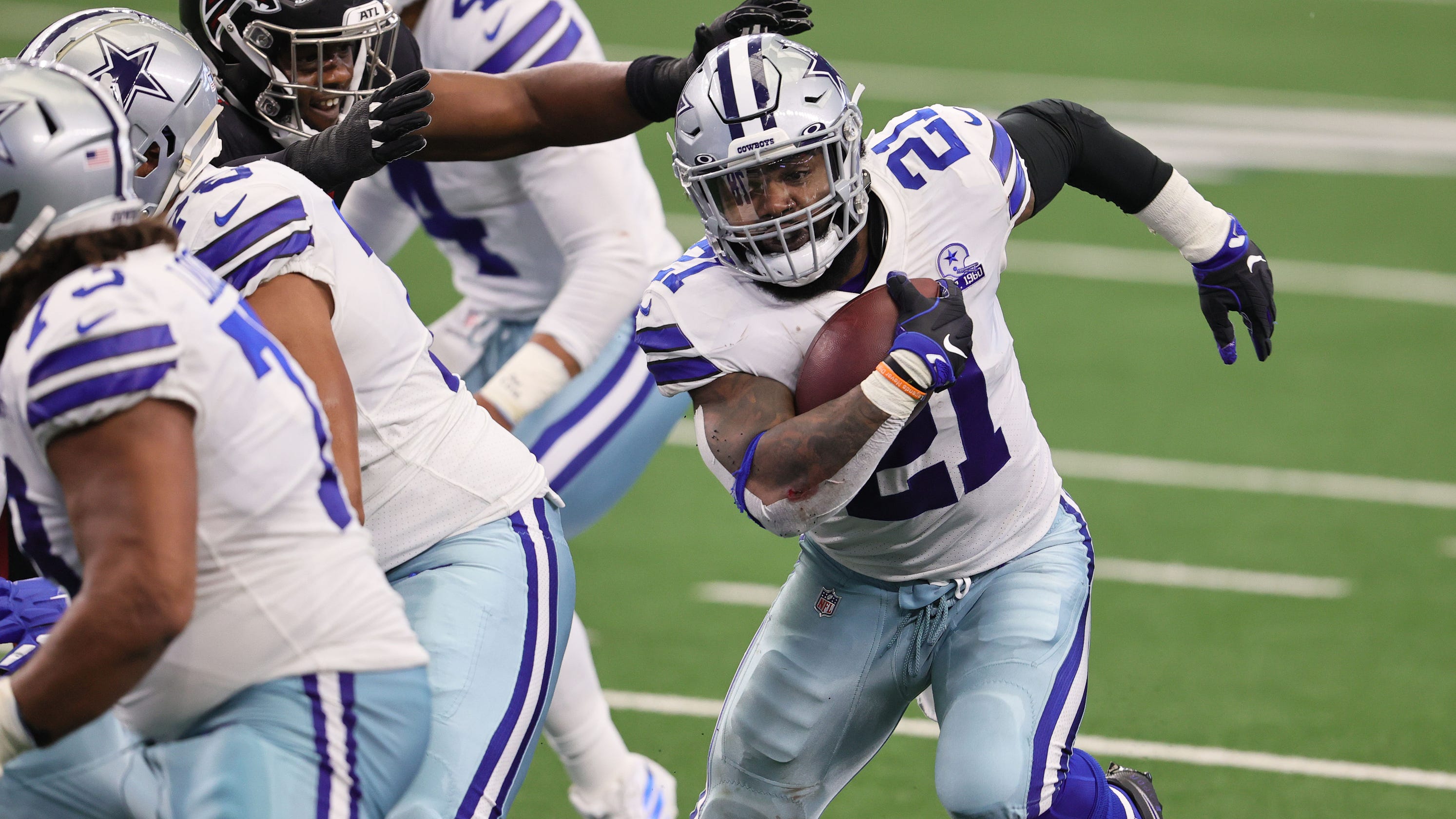 How Ezekiel Elliott decided to get ‘Feed Me’ tattoo

So he wasn’t fazed when Cowboys running back Ezekiel Elliott floated the idea of branding his slogan onto the frame often visible beneath his crop-top jersey.

“He was like, ‘What do you think about ‘Feed Me’ going across my abdomen?’” Guzman told USA TODAY Sports. “And I was like, ‘Oh snap. I’m ready if you’re ready.’”

On June 27, Elliott conferred with his quarterback and was ready.

“I just hit Dak [Prescott],” Elliott texted Guzman that night. “And imma get feed me on my stomach.”

Guzman needed no further instruction. The Dallas-Fort Worth tattoo artist set to work brainstorming the design and stencil to best display Elliott’s mantra to a world of NFL fans. “California-style, Chicano-type lettering,” he describes the ultimate influence, “which is more like a freehand type of art.”

The “Feed Me” gesture Elliott has embraced since his sophomore year at Ohio State still rings true.

“Give me the rock,” he summed it up Wednesday afternoon, “so I can go make a play.”

But in Year 5 of his career, Elliott has expanded the definition of what it means to “eat” as a leader for the Cowboys. His stat line of 249 yards from scrimmage and three touchdowns through two weeks tells much of the story. Yet 64 yards and a score came via his role in the passing game, which Elliott honed through a summer of workouts on the turf Prescott installed in his backyard. In a 40-39 comeback over the Falcons last week, the Cowboys relied heavily on Elliott’s assistance in pass protection after two of their top three tackles landed on injured reserve and a third was inactive nursing a neck injury. Add in empty-stadium road games, and teammates look to Elliott for energy to feed off, too.

Cooper laughs recalling the July workout when Elliott showed up to Prescott’s home less than 24 hours after Guzman completed the “Feed Me” tattoo. Elliott’s abdomen was still freshly swollen.

‘His energy rubs off on anybody’

“Feed Me” was the fourth tattoo Guzman designed and inked for Elliott this offseason.

The Greek mythological figure Atlas adorns the right side of Elliott’s torso, Atlas’ strength epitomized in both the world he carries and the chiseled abdomen Guzman superimposed from a photograph of another statue. Move inward and the face of a bulldog canvasses Elliott’s upper right abs. Guzman filled in a gap on Elliott’s forearm with a piercing blue eye, its color sharp against the black-and-gray art surrounding it.

Guzman didn’t know much about Elliott’s career when the running back was referred to him by a mutual friend, whose back tattoo Elliott admired. Guzman’s “not really big into sports,” he says, so friends explained he was about to ink one of the best running backs in professional football. During hours shared over a Cheyenne tattoo machine with seven-round liner needles and a 13-mag shader, Guzman came to learn more about Elliott.

Elliott’s threshold for pain impressed Guzman, who offers to split the outline and shading into separate sessions to reduce consecutive hours in pain. Elliott opted to complete the piece in one session on a massage table at his home.

During the session, Elliott and Guzman traded stories. They discussed how each arrived at their careers—Guzman airbrushed T-shirts before transitioning to tattooing nearly five years ago—and how their mothers shaped their high standards and work ethic, Guzman said. Another commonality: Neither mom is particularly enthusiastic about their son’s tattoos.

“I think his energy rubs off on anybody,” Guzman said. “Once you’re around him, it kind of fuels you. Something about him—you just become better, you want to do things a little more.

“He has energy that makes you want to go hard on everything you do.”

The Cowboys echo that sentiment.

Offensive coordinator Kellen Moore calls Elliott an “energy source” while wide receiver Michael Gallup says Elliott is “always coming up with something funny to get everybody going.” Prescott credits the omnipresent threat Elliott poses to defenses as the key to the quarterback’s three Week 2 rushing touchdowns against the Falcons.

“This is a guy, as I said, who during the games he helps me get guys going, get guys in spots,” Prescott told USA TODAY Sports. “I don’t think there’s many, if any, running back that’s as intelligent and knows the game like Zeke does … being back there for the four years as we have, [we’re] able to see the same stuff.

“He helps me a lot, whether I’m locked in somewhere else and he knows that I normally would do [something]. This guy’s helping me give receivers signals and tell the offensive line stuff sometimes.

“I mean, it calls just for a great tandem. As he said, I can’t imagine me not in that backfield with him.”

NFL’s 0-2 TEAMS: Who still has hope to turn season around and reach playoffs?

NFL POWER RANKINGS: Where do Cowboys stand after comeback win vs. Falcons?

Time to feed in Seattle

In Seattle on Sunday, Elliott will face a defense that’s allowed just 69.5 rushing yards per game (second-best in the NFL) through two weeks. But the Cowboys will need him to scrap together yards to relieve a defense facing Russell Wilson, who currently leads the league with nine passing touchdowns and a 140.0 quarterback rating. The Cowboys are intent on improving a poor start in time of possession, the 34:43 average they’ve ceded to opponents fourth-most in the league. They’ll need a cleaner beginning, too, than the four fumbles (three lost) that devastated their Week 2 first quarter.

“This season, as an offense, we have shot ourselves in the foot,” Elliott said. “We turned the ball over. The week before, not stretching those drives and not converting on third down. Going into this week, we have to make sure we are locked on third down and locked in on the ball.

Prescott believes the Cowboys are capable of routinely putting up the 40 points they did in Week 2, their talented trio of receivers wreaking havoc. But they won’t rely on the onside kick miracle and up-tempo fury that cemented them as the first team in 441 tries to beat an opponent that had scored 39 without a turnover. Repeat 40-point performances are “only realistic if Zeke is doing and having the success he has and giving them one-on-one matchups,” Prescott told USA TODAY Sports early in September. And this week, a defense with a battered secondary will cherish any respite from Wilson.

Is dropping 40 too much to ask of this Cowboys offense? Dak doesn’t think so.

“If we don’t have those expectations and almost make that a standard for ourselves,” he told me, “we’d be cheating ourselves.”https://t.co/R110Rn20rypic.twitter.com/Xq7erdZwUv

Elliott’s ready and eager to be fed.