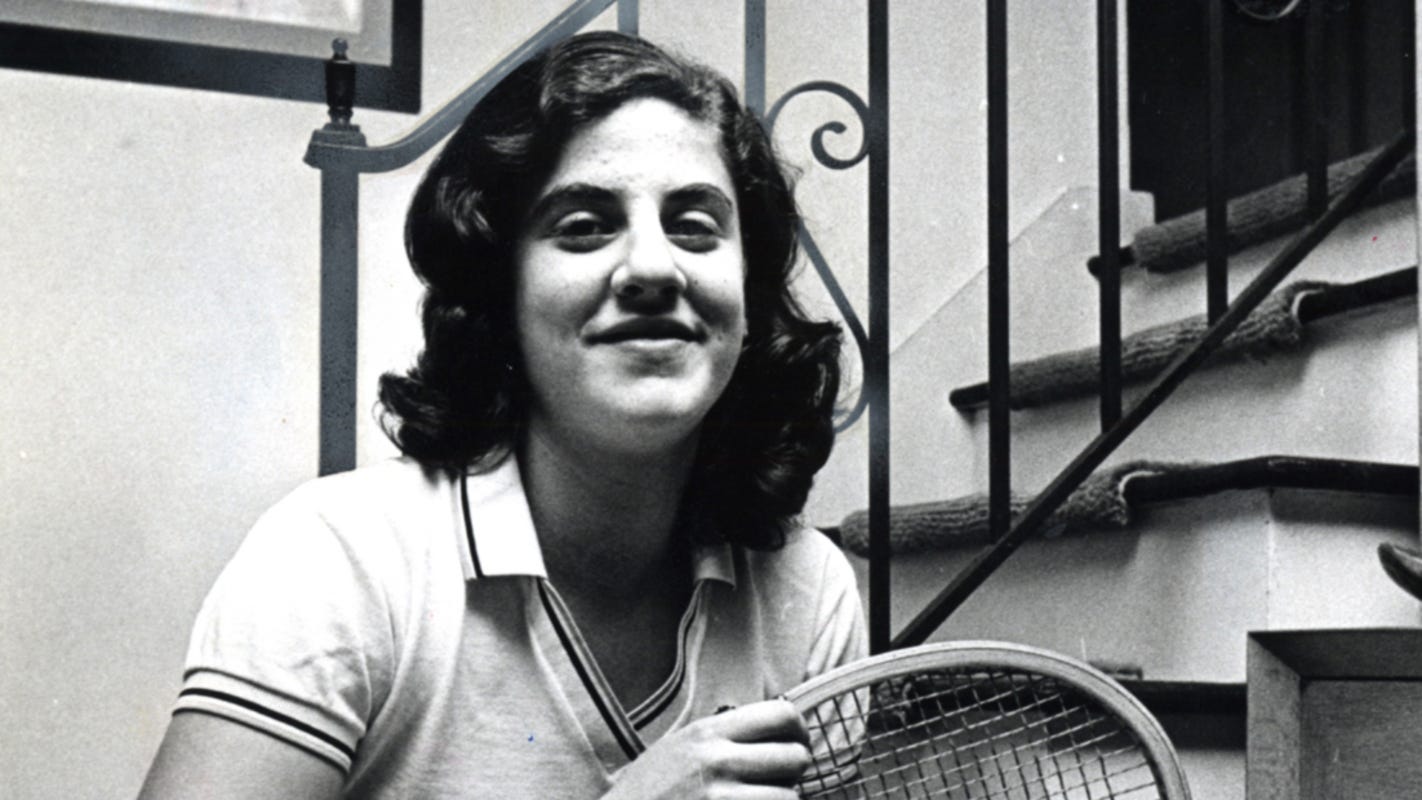 Years before she became a Supreme Court justice and a cultural icon known as “Notorious RBG,” Ruth Bader Ginsburg took up the case of Abbe Seldin of Teaneck, New Jersey.

Seldin, 15 and a nationally ranked tennis player in 1972, just wanted to try out for the Teaneck High School varsity tennis team. Even the team’s coach publicly announced that he wanted her on the squad. Seldin was, as the coach noted at the time, better than many of the boys.

But she was blocked from even stepping on the tennis court.

So Ginsburg took her case to federal court in Newark, New Jersey — and found a way to win.

Only boys were allowed to play on the Teaneck High School team. With no girls’ tennis team at the school then, Seldin was reduced to finding opponents — some of them men — in private clubs across the New York-New Jersey region.

Seldin’s story as a struggling female athlete now resonates as little more than a legal footnote as America prepares to bid its final goodbyes to Ginsburg, with formal viewings at the U.S. Supreme Court and the Capitol before her burial next to her husband at Arlington National Cemetery.

Abbe Seldin, in 1972, striking a backhand in a tennis match. Seldin, as a 15-year-old sophomore at Teaneck H.S. and a ranked girls tennis player by the Eastern Lawn Tennis Association, went to federal court in Newark for the right to play on the boy’s tennis team. Her attorney was Ruth Bader Ginsburg. Because of Seldin’s lawsuit, the New Jersey State Interscholastic Athletic Association changed its rules barring girls from boy’s sports. Seldin made the Teanek tennis team but quit because of mistreatment from the coach. (Photo: Courtesy of NJ American Civil Liberties Union)

For Seldin, the experience was life-changing.

Looking back on Ginsburg, much attention has understandably focused on her landmark Supreme Court opinions, many of them liberal dissents against the court’s increasingly conservative tilt. But there are also lessons from Ginsburg’s life before she joined the court — even before she became a noted feminist attorney who argued cases before the court.

This is why the federal case that Ginsburg championed on Seldin’s behalf is so instructive.

In January 1972, when Ginsburg filed Seldin’s lawsuit to play tennis at Teaneck High School, President Richard Nixon was riding high. Watergate was not yet a scandal; it was the name of a Washington, D.C., apartment complex near the Potomac River. Title IX, the landmark federal law that would become the legal springboard for women to gain an equal sports footing in high schools and colleges, was still months away from being passed — and it was still more years before the law was implemented across the nation.

Abbe Seldin, former top-ranked tennis player, went to federal court in 1972 to gain the right to play for the Teaneck High School boy’s tennis team. Her attorney was future U.S. Supreme Court Justice Ruth Bader Ginsburg. She was on Sept.22, 2020 near her home in Wellfleet, Ma. (Photo: Stephen Heaslip)

Looking back on those days from the perspective of today’s American sports cornucopia, when women’s and girls’ sports are taken for granted in most high schools and colleges — professional ranks, too — the world of athletics in the early 1970s seems strangely anachronistic, even a bit weird.

Some high schools back then allowed girls to play intramural sports. But at most high schools and colleges, girls were relegated to cheerleading — for the boys. Indeed, it was the boys who were allowed to get really sweaty and attract most of the athletic attention and money, not to mention packed crowds at football stadiums and basketball gyms.

Seldin wanted to change that. As a sophomore at Teaneck High School, she did not see herself as a raging feminist revolutionary. She just wanted to smack tennis balls with her wooden Wilson Billie Jean King racquet. As she noted in a recent interview from her home in Wellfleet, Massachusetts, on Cape Cod, “I was a nice, quiet kid. I just wanted to play some competitive tennis in high school before I went to college.”

Teaneck 1/31/72 Abbe Seldin with her tennis racket. She is suing to lift ban on girls in HS sports. (Photo: NorthJersey.com)

But rules were rules. And in 1972, the New Jersey State Interscholastic Athletic Association, which controlled high school sports across the Garden State, was in no mood to change them.

When asked why girls could not play such non-contact sports as tennis, the NJSIAA’s secretary treasurer, James Growney, pointed to “substantial practical, psychological and physical reasons for separating girls and boys on the high school level in competitive sports and in tennis in particular.”

Among the factors cited by Growney were the emotional implications of boys competing with girls in “head to head competition” as well as the dilemma of finding chaperones and tending to girls who suffered “leg cramps” or other injuries.

In retrospect, Ginsburg’s answer to such concerns is enlightening — even humorous.

Ruth Bader Ginsburg types while on a Rockefeller Foundation fellowship in Italy in 1977. (Photo: Supreme Court of the United States via AP)

In submitting legal papers on Seldin’s behalf on Jan. 31, 1972, in federal court in Newark, Ginsburg wrote that in most non-contact sports such as tennis, sex is “as irrelevant a factor as is race, religion, national origin, political beliefs or hair color.”

Ginsburg went on to point out that this separation of sexes in sports was more than just an emotional issue, however. At the heart of the matter was money — specifically the tax dollars that public high schools earmarked for boys’ sports while barely spending a dime on the girls.

The boys, Ginsburg wrote, “possessing no greater skills receive training at public expense.” The girls, if they wanted to improve their skills, had to rely on paying for their own private trainers and coaches, she added.

Certainly, that was the case with Seldin.

Ranked 22nd among 15- and 16-year-olds by the Eastern Lawn Tennis Association — the precursor to the United States Tennis Association, which now controls most major American tournaments including the U.S. Open — Seldin found herself bouncing between coaches in New Jersey, New York City and Long Island. Her father, Arthur, a lifelong tennis player and former captain of the New York University tennis team, who died in 2012, was often her chauffeur, she said.

How Ginsburg entered her life was something of an accident.

At the time, Ginsburg, who had already established herself as a highly regarded Rutgers law professor, was about to transfer to the Columbia Law School faculty. It would be several more years before she would gain a national reputation as one of the go-to attorneys for arguing feminist-based legal causes in front of the U.S. Supreme Court. And two more decades would pass before Ginsburg was appointed to the court by President Bill Clinton.

Ginsburg wanted more courtroom experience. So she volunteered with the New Jersey chapter of the American Civil Liberties Union.

Around that time, Seldin, with the help of her mother, Shirley, who died in 2010, approached the ACLU with a complaint: Why did New Jersey’s public schools persist in blocking girls from many sports?

Ginsburg took the case, along with another noted feminist attorney and Rutgers professor, Annamay Sheppard.

The case immediately became closely watched. Today it is considered something of a forerunner for the Title IX movement in female sports.

But in its early months, the case did not look like it would gain any legal traction. The New Jersey attorney general asked for a delay. Legal wrangling continued for a year.

Finally, U.S. District Judge Leonard I. Garth said he wanted to settle the dispute in a different venue: on the tennis court.

Garth, an avid tennis player, suggested that Seldin should have to play several boys on the Teaneck team — with the judge observing to determine whether she was good enough.

“I am perfectly willing to spend a couple of hours on the tennis court to save several days in my own court,” Garth said. “I’ll do anything to dispose of this case. I’ll take her on myself if I have to.”

It never came to that.

The NJSIAA relaxed its rules and allowed girls to play some sports, including tennis.

It was now the spring of 1973. Seldin, a junior, grabbed her racquet and began practicing with the boys’ team.

But she never played a match. Seldin quit the team after a new coach shunned her. She says she was also injured in a drill in which she was forced to climb stairs on her hands while a teammate held her legs like a wheelbarrow.

“In some ways, I feel like Abbe was born 40 years too early,” said Jeff Gottesfeld, a children’s book author and TV script writer based in North Hollywood who played on the Teaneck team in 1973. “Abbe was a very strong player. If it were the cohort now, there would have been a lot more obvious support for her.”

The painful experience hardened Seldin, however. In 1975, as a player on the women’s tennis team at Syracuse University, she demanded — and received — an athletic scholarship. It was one of the first women’s scholarships that the university gave to any female athlete.

Abbe Seldin, former top-ranked tennis player, went to federal court in 1972 to gain the right to play for the Teaneck High School boy’s tennis team. Her attorney was future U.S. Supreme Court Justice Ruth Bader Ginsburg. She is photographed near her home in Wellfleet, Ma., on Sept. 22, 2020 (Photo: Stephen Heaslip)

Seldin, now 64 and with two knee replacements, still plays tennis when she’s not working for a real estate multiple listing service on Cape Cod, where she lives with a brown pit bull named Layla, a black Labrador retriever named Sabella and her partner, Farny Schneider, whom she met while volunteering for the presidential campaign of Democrat Walter Mondale in 1984.

She doesn’t often explain to colleagues — even close friends — that Ginsburg was once her attorney. It’s not her style, Seldin explained. Gottesfeld did not know of the Ginsburg connection to his friend until recently.

But after hearing last week that Ginsburg died, Seldin praised her former lawyer in a Facebook post.

“There were big lessons from this experience,” Seldin said later in a phone interview. “It taught me to be tougher. It taught me to stick up for myself for what is right.”

But she never got to play for Teaneck High School.

That changed six years ago, when her class returned to Teaneck for its 40th-year reunion.

Seldin organized a tennis match at the courts in Teaneck’s Milton Votee Park.

This time she played with the boys.

Mike Kelly is an award-winning columnist for NorthJersey.com. To get unlimited access to his insightful thoughts on how we live life in New Jersey, please subscribe or activate your digital account today.