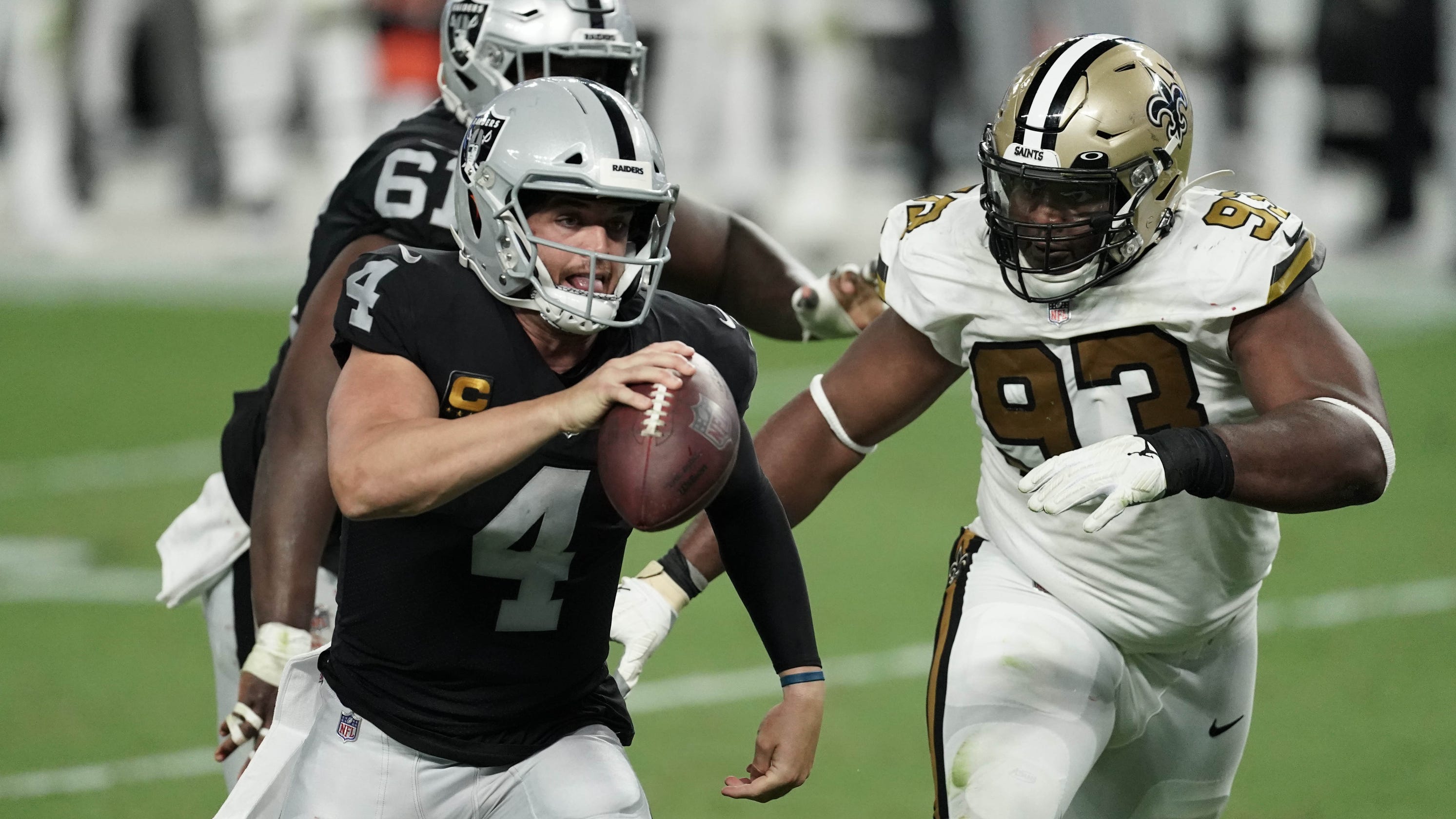 LAS VEGAS – Every team on the move needs a franchise quarterback, but it wasn’t too long ago when you could have found some strong odds that Derek Carr would not be that for the Las Vegas Raiders.

Never mind that Carr passed for more than 4,000 yards in each of his past two years for the Silver and Black.

After his last game in Oakland, when he visited the Black Hole to say farewell after a meltdown of a loss against the Jacksonville Jaguars, he was serenaded with boos.

Then there was the day last winter when Carr quickly moved his family to Vegas.

“The first day I moved here, Tom Brady was on the front page of the newspaper,” Carr recalled Monday night after guiding the Raiders to a 34-24 upset win against the New Orleans Saints to christen the franchise’s new digs, Allegiant Stadium. “It just adds fuel to the fire, to still be here to accomplish things that mean so much to you.

“This is family to me, it’s more than football. This place and every relationship from the top down means everything to me. I’m trying to put how much this means to me, but it’s hard. I love this place.”

And just think. He’s only played one game, with no fans in the stands, in Vegas.

Yet it’s easy to feel Carr’s purpose. The buzz about Brady possibly becoming a Raider was real enough, just like it had to be so annoying to be the subject of constant speculation for a couple years running that he’d never survive his demanding coach, Jon Gruden.

But he’s still here, declaring after a near flawless performance against a complex Saints defense that he never wants to play for another franchise.

POWER RANKINGS: How high do Raiders rise after beating Chiefs?

That’s probably what every team on the move wants to hear from its franchise quarterback. Especially when the team has started 2-0 and the trigger man has endured so much heat during back-to-back losing seasons in the first two years since Gruden’s return.

On Monday night, Carr spread the ball to 11 different targets, threw three touchdowns without a pick and was clutch as the Raiders converted 10 of 17 third downs and both times on fourth down. His 15-yard touchdown pass to Zay Jones on a third down before halftime might have been his best throw of the night, to a tight window in the short corner of the end zone. And then there were so many throws to star tight end Darren Waller (12 catches, 103 yards, one touchdown), who punished the Saints.

Through two games, Carr has completed 73.5% of this throws (which, if it holds up, would be the best clip of his career) with four touchdowns and zero picks. He won’t get stat-sheet credit for the few times on Monday night when he wisely threw passes away to avoid sacks. But the film review and the bottom line will show it. The efficiency he’s demonstrating suggests that he’s found a home in another sense – growing in Gruden’s complicated offense.

“His confidence is growing in the system,” Waller said. “It’s a lot of volume in our system, a lot of stuff that he needs to know. I don’t know how he knows it all, all the checks and things like that. The time he puts in and the brain power to remember that stuff is impressive.”

Gruden, mind you, is not buying the narrative that some light bulb with Carr has flicked on. Asked about the quarterback’s comfort level in the system, Coach Chucky, as he is called, grumbled – and added layers of context.

“There’s a lot of people who make a lot of opinions about how Derek performs and our relationship, but he had nine different flankers last year,” Gruden said. “When I was here for four years, we had Tim Brown every week for four years. I don’t know how many different combinations we had on the offensive line (last season), yet (Carr) threw for 4,000 yards at 70% (completion rate) and put us in position to make the playoffs in Week 15. This guy’s a great quarterback, and we’re surrounding him with better players.”

Still, after earning three consecutive Pro Bowl selections before Gruden’s arrival, it’s a fact of NFL life that the pressure for Carr to regain his groove during this new era for the Raiders is immense.

And Gruden’s offense can still be a bear to digest and execute. Experience has to help, too.

“Coach’s offense isn’t easy,” running back Jalen Richard said. “I can only imagine how it is for the quarterback. When Coach Gruden came in with his offense, it forced me to become a smarter football player. … DC is much more comfortable. He knows the plays and he is a lot more in tune with the things going on, and he and Coach (have) a nice gel together.”

Of course, this season is so young. And next up is a trip to Foxborough to match wits against Patriots coach Bill Belichick and Co. As Carr put it, now is not the time for any bold statements.

“I’ll let everyone else talk about the statement,” Carr said. “I’m tired of talking and I think people can hear it in my voice sometimes. It’s nice to go out and be 2-0. It feels good. But like I told the guys after the game, job is not done. (We can) be all excited and feel good about ourselves because people are saying nice things now. Going on to the Patriots next week.

“Coach Belichick has a day up on me already. I’ve got to get to studying.”