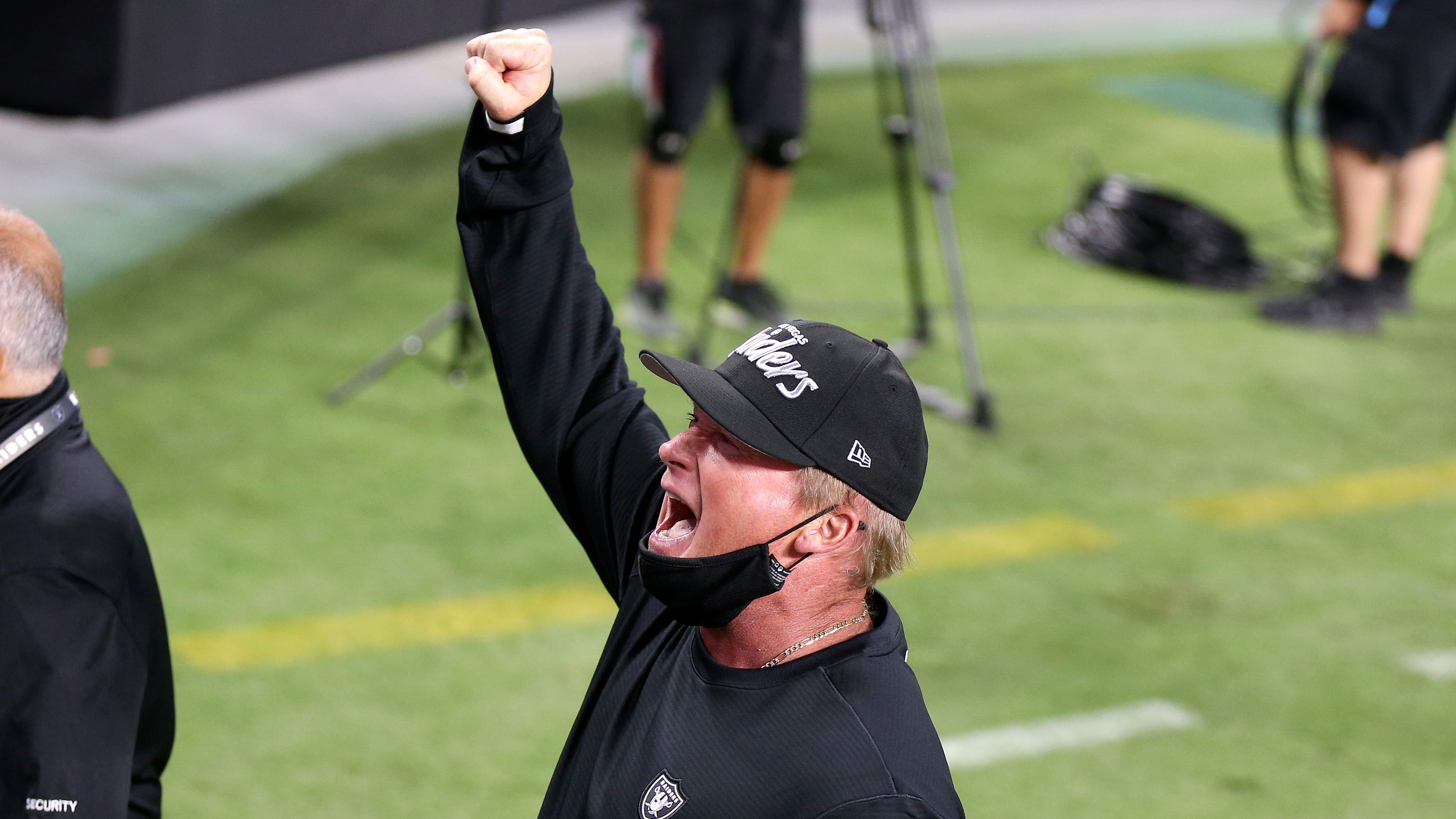 Sean Payton and Jon Gruden are two of the most innovative offensive minds in the NFL, architects of intricate, complex schemes that maximize the unique skills of their own players while neutralizing those of their opponents.

And, yet, neither is capable of wearing a mask properly.

There are 4-year-olds who have figured out how to make themselves heard while keeping their face coverings securely in place. This isn’t that hard. But for a second week, the coaches of the New Orleans Saints and Las Vegas Raiders must have prompted face palms at NFL headquarters as they were shown, repeatedly, during a nationally televised game, violating the league’s rules requiring sideline personnel to wear masks.

Gruden’s mask hugged his chin for most of Monday night’s game, good for containing dribble and drool, not so much the aerosol droplets that spread COVID-19. Payton’s gaiter was around his neck, not his nose and mouth, so the same effectiveness in combatting the virus as wearing a turtleneck.

“I’m doing my best,” Gruden said. “I’m very sensitive about it, but I’m calling plays. I just want to communicate in these situations.”

NFL POWER RANKINGS: A new No. 1 emerges after Week 2

A look around the league shows that’s a pretty weak defense. The Green Bay Packers have the most prolific offense in the NFL, so that gaiter that coach Matt LaFleur keeps pulled up over his nose isn’t hampering his ability to call plays. Cincinnati Bengals coach Zac Taylor appears to be communicating just fine through his face covering with rookie quarterback Joe Burrow.

Kansas City Chiefs coach Andy Reid needed a defogger for his face shield in the season opener, yet Patrick Mahomes and Co. managed to adapt.

“I apologize and if I get fined,” Gruden said, “I will have to pay the fine.”

Oh, he’s going to get fined all right.

After issuing warnings to coaches who treated their masks like bothersome accessories in Week 1, the NFL escalated the matter Monday, handing down more than $1 million worth in fines. Seattle’s Pete Carroll, Kyle Shanahan of the San Francisco 49ers and Vic Fangio of the Denver Broncos were each fined $100,000 for not wearing their masks Sunday, and their teams were docked an additional $250,000.

Payton was the first NFL coach known to have COVID-19, back in March, and Gruden claimed Monday night that he, too, has had it. Theoretically, that should mean they have immunity from the virus – though researchers still aren’t sure how long it lasts – and are not a threat to infect others.

But that’s not the point.

The NFL has expended a lot of time, effort and money to pull this season off, and it has been hyper-sensitive to the fact it’s doing so when many businesses remain shuttered, kids are going to school remotely and people still can’t see loved ones. The last thing the league wants is to give the impression it is not treating COVID-19 with utmost seriousness.

Or, as Pittsburgh Steelers coach Mike Tomlin said Tuesday, “For me personally, I’m just thankful to be working. A lot of us are not able to in this pandemic circumstance.  I don’t take that for granted.”

“I just want to show a good example and show that I’m thankful for working,” Tomlin said.  “I try to be as diligent as I can.”

And while the NFL has to be concerned about the message Gruden, Payton and other coaches who flout the mask requirements are sending to the millions who watch games each week, they should be equally concerned about the message the coaches are sending to their own players. If they’re willing to ignore protocols on national TV, after the NFL has made it clear there will be consequences for noncompliance, what are they doing in the privacy of their facilities?

The NFL and NFLPA announced Tuesday that there were “zero confirmed positive tests among players” last week, impressive given this was the first round after the season — and travel — began. But they need only look at the dumpster fire that is college football to know what happens when players – or those around them – don’t take COVID-19 precautions seriously.

On Tuesday, Notre Dame postponed this weekend’s game at Wake Forest and paused all football activities after seven players tested positive for COVID-19. That’s at least the 18th college game that’s had to be postponed or canceled due to the virus.

And we’re not even through September.

“You can’t let up,” NFL commissioner Roger Goodell told USA TODAY Sports’ Jarrett Bell on Monday night in Las Vegas. “We’ve got to consistently do the things that have gotten us to this place and not think, ‘Okay, things have gone so well, so it’s okay now.’ It’s not. You’ve got to stay on your toes and we’ve got to continue to be disciplined.”

If Gruden, Payton or any other coaches are still struggling with this, maybe they can get a tutorial from Tomlin or LaFleur. Or just consult their favorite 4-year-old.