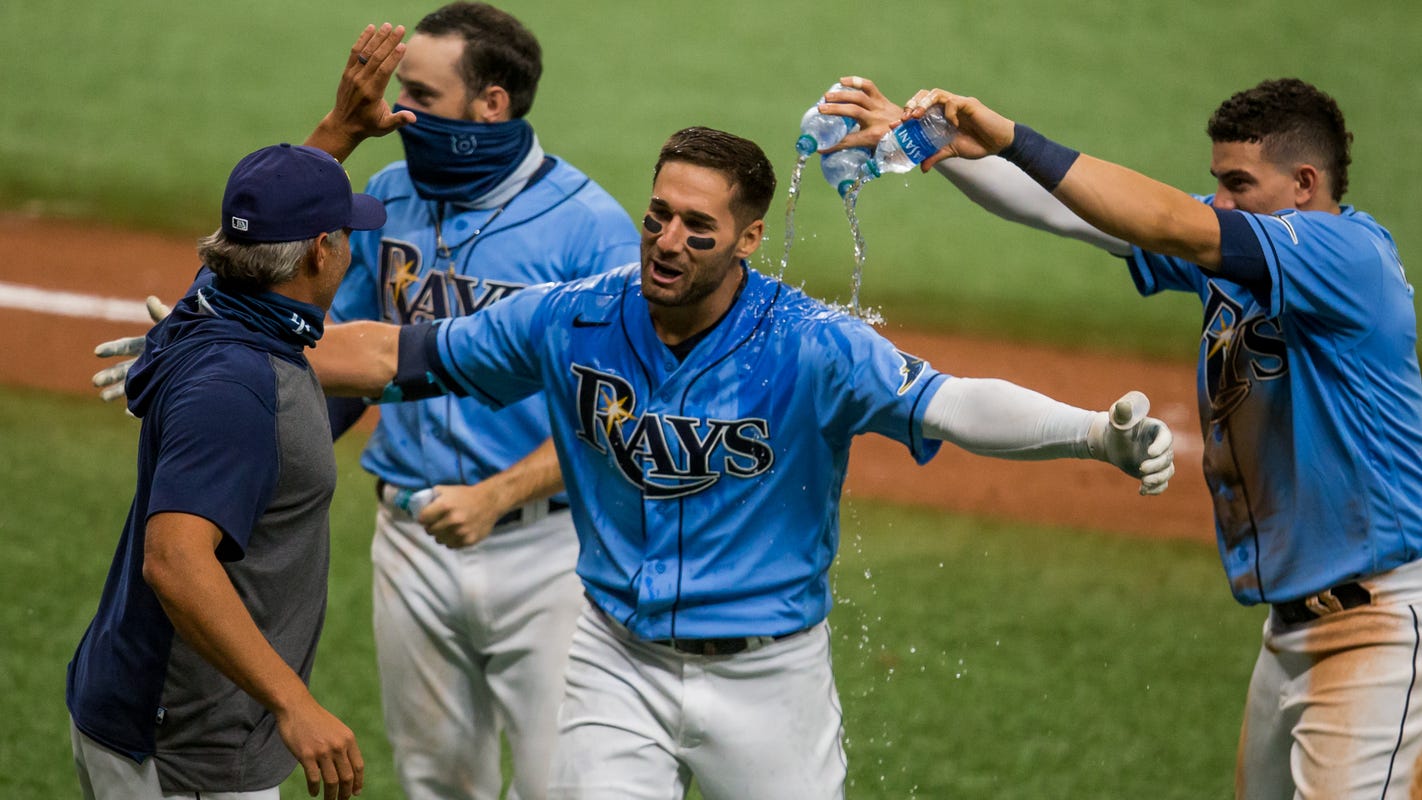 “It says, ‘Postseason 2020. Respect Tampa Bay,’” he said, reading the pre-fab league slogan for every playoff qualifier to a group of socially-distanced media members.

“I didn’t know we were disrespected, but anyway…”

They will likely enter the 16-team playoffs as the No. 1 seed in the American League, but unlike their previous clubs or other small-market successes, this team is not designed merely to punish opponents over a longer haul before getting exposed in October.

“Just getting in was not what this team was built to do,” says sixth-year manager Kevin Cash, “and certainly something we’re not going to be satisfied with.”

PENNANT RACE: What to watch for in MLB’s final week

MORE: Giants were supposed to be rebuilding – but they’re in the postseason hunt

The Rays have been baseball’s high-info, low-rent Cinderella story since 2008, when they toppled the American League East power structure and buried their grim Devil Rays past by advancing to the World Series.

This Rays iteration is made possible, once again, by a potent collection of brainpower in the front office that churns through talent yet ensures player buy-in by maximizing their talent, helmed by a manager who keeps the clubhouse loose and welcoming, with a core determined to go a step beyond 2019.

This group arrived early, winning 90 games in 2018, then 96 games in 2019, followed by an AL wild-card win at Oakland and a stirring AL Division Series run that ended in a Game 5 loss against the Astros.

And while this 60-game season provided non-stop challenges for the Rays, it’s also illuminated why they may be the perfect squad to attack this unprecedented 2020 playoff format.

Pandemic baseball has been a grind for every team, every player, and the two forces that have made 2020 so miserable – coronavirus, and a rash of injuries as teams ramped up after quarantine – hit the Rays hard.

All returned by the end of July, but then the Rays lost almost an entire staff to injury. Five pitchers – Chirinos, swing man Jalen Beeks, relievers Andrew Kittredge, Colin Poche and Chaz Roe – have either undergone Tommy John surgery or may need it. Two-way player Brendan McKay is shut down with a shoulder injury, and lefty reliever Jose Alvarado is trying to work his way back from one.

And this is where the Rays’ structure – a team with 100-win talent at the big league level, but also a top farm system – enables it to withstand the stress test of Baseball 2020.

For this season only, major league clubs are allowed a 28-man roster – giving Cash even more leeway to exploit platoon advantages, piggyback starters one day or use an “opener” another.

The greater advantage lurks beneath the surface.

While teams must adhere to standard rules of the 40-man roster, they are, in this pandemic-framed season, allowed to pull from a 60-man “player pool” to replenish the big league squad in the event of injury or COVID-19 outbreaks.

The Rays believe no pool is deeper.

“We knew it coming into this season. We knew coming into Port Charlotte – we have a strong 60,” says reliever Ryan Thompson. “I think hands down we have the strongest 60 of any club in the major leagues. In a shortened season, to see us breaking or tying full-season records – that’s incredible.”

That record Thompson’s referencing may be peak Rays. The team that lost nearly an entire bullpen to injury shrugged its shoulders and patched together a new unit that needed just 53 games to tie a major league mark: 12 pitchers with at least one save.

It is a testament both to the club’s depth and its willingness to shelve traditional roles, even if it leaves them without a designated closer – Nick Anderson has a team-high six saves – enjoying the job’s luxurious trappings.

“Nobody’s showing up in the seventh because we only throw the ninth,” says reliever Pete Fairbanks, acquired in July 2019 from Texas and now punching out 35 batters in 24 innings. “That’s not how it works down there, and that’s not how Cash uses us.”

By force of habit and injury, the Rays have deployed 24 pitchers this season, yet still may just be scratching the surface. While infielder Wander Franco is the most touted Rays prospect – and, at 19, is included in the Rays’ pool of potential playoff participants – it is the bottomless trough of power arms that keep them solvent.

Catcher Mike Zunino discovered that firsthand during intrasquad games at their Port Charlotte alternate training site as he worked his way back from an oblique injury.

“You go down there and grab that bat, it could be tougher at-bats than what you see in the big leagues, against some arms, because the depth is so deep,” says Zunino. “There’s no question guys down there could be on any big league roster right now.”

That doesn’t mean the club that pioneered the “opener” strategy must flim-flam its way through every game. Lefty Blake Snell more closely resembles the 2018 Cy Young Award winner than the fellow who struggled through an injury-plagued 2019. Veteran Charlie Morton has returned from shoulder inflammation. Glasnow has struck out 83 batters in 51 ⅓ innings, on the strength of a 97-mph fastball and curve that Cash calls “the most devastating two-pitch combo that you see.”

Or, the Rays can throw the kitchen sink at a generational pitcher and prevail. Monday, Mets ace and two-time Cy Young winner Jacob deGrom struck out 14.

The Rays? Fairbanks opened for 1 ⅔ innings, rookie Josh Fleming served as the “bulk man” for three innings, and a trio of relievers recorded the final 10 outs of a 2-1 victory in New York.

“This team is, in my opinion, the best in the league,” says Fleming, drawing on his vast experience in a career that began, uh, on Aug. 23. “It’s special to be part of this team and throw in big games.”

Forgive Fleming’s impetuous youth, since he may be correct.

It’s no accident the Rays suffered a significant front office brain drain in recent winters – most notably, with former exec Chaim Bloom tabbed to rebuild the Boston Red Sox. While most low-budget clubs utilize high draft picks to build from the ground up, the Rays manage to work the edges in an industry where most clubs have sanded them to a nub.

Remember the 2019 wild-card game, when Yandy Diaz, Tommy Pham and Avisail Garcia ambushed the A’s with four home runs? Well, Diaz is injured, Pham was traded and Garcia left as a free agent.

In their place is an even deeper, versatile and athletic club.

Yes, the Rays’ offense has its own record: They became the first club to start nine left-handed batters in one game. (They beat the Red Sox that night, 11-1).

More substantively, a team that on paper looks like the wild-eyed concoction of a soulless analytics lab more than passes the eye test. The Rays meld elite athleticism and attention to detail superbly, the byproduct of a player development system from which other organizations have thieved personnel.

The Rays lead major league clubs in UZR/150 and rank in the top seven in several other defensive metrics, including runs saved. Yet the nonstop skills clinic from go-get-it outfielders like Kiermaier, Manny Margot and even the lumbering Hunter Renfroe, or the up-the-middle brilliance of shortstop Willy Adames and Brandon Lowe is best appreciated in person.

That athleticism extends to the offensive end, where a team with just a .754 OPS is buttressed by baserunning precision; they’ve stolen 45 bases in 53 attempts, nailing the sabermetric success standard of 85%.

“It’s on us to take that and run with it. More times than not, they get it right. And I think that’s a huge credit to all departments in the Rays organization – how hard they’ve worked to find these guys.”

It’s on Cash to keep it all copacetic, no easy task when the Rays’ extreme platooning can suppress both playing time and production that ultimately gets players paid. He tries to even it out with an inclusive atmosphere.

“Cash is a big believer in guys able to be themselves, with no added pressure,” says Zunino, in his second season with the Rays. “They can be themselves personality-wise, playing-wise, and that goes a long way.”

Says Wendle: “It’s team baseball in its purest form, and I love that.”

The 2020 rallying point came long before a pandemic upended the year, even before Margot and Renfroe and Arozarena arrived in winter trades. In the wake of their Game 5 loss to the Astros, the club gathered and vowed it was only getting started.

After every 2020 victory, says Fleming, the team assembles and recalls that night, and ponders what might be possible in an unusual year that might just be tailor-made for a most unusual team.

“There wasn’t any doubt we were going to be back in the postseason,” says Brandon Lowe. “It’s just, how far are going to be able to go this year?”