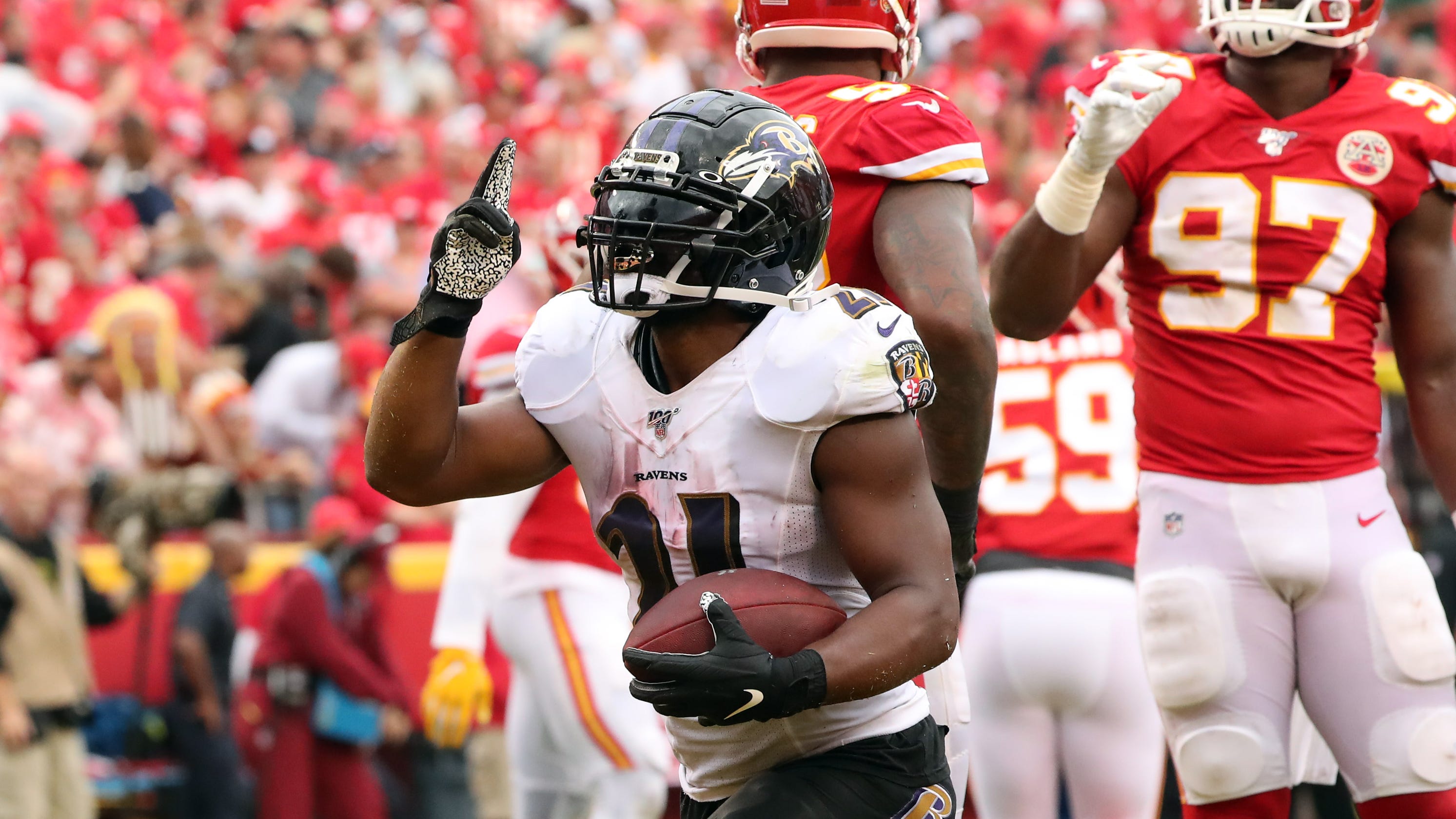 Ravens replace Chiefs in No. 1 spot

1. Ravens (2): They’ve won 14 consecutive regular-season games – their last five by at least 16 points – and this year’s dominant 2-0 start comes with an average margin of victory of 24.5 points. QB Lamar Jackson has 29 TD passes and one INT over his past 10 regular-season appearances.

2. Chiefs (1): Purists may hate to see a defending champ dropped in a power poll when they have yet to lose … even if they’re benefiting from a bailout of a listless performance courtesy of stellar K Harrison Butk(ick)er. But Kansas City can correct any perceived slight by beating Baltimore on Monday night.

3. Seahawks (6): Looks like they might just wind up with league’s offensive (QB Russell Wilson) and defensive (S Jamal Adams) players of the year … though it must be noted a defense ranked dead last has much to fix.

4. Packers (5): Four NFL teams have started a season with at least 80 total points plus 1,000 yards of offense. This Green Bay squad is one of them.

5. Steelers (4): Keep an eye on rookie WR Chase Claypool, whose 84-yard TD reception Sunday is 2020’s longest play to date and the longest by a Canadian-born player.

6. Saints (3): New Orleans still hasn’t enjoyed a 2-0 start since 2013. Thanks for that nugget, new “Monday Night Football” guys. What happens in Vegas, stays in Vegas, fellas.

8. Titans (9): They’re in sole possession of first place in AFC South … yet Tennessee is also extremely fortunate it’s not currently an 0-2 football team.

9. Patriots (10): Sunday snapped streak of 64 consecutive regular-season games when New England had taken the field as the favorite. Hopefully you took Seattle and gave the points … and yet scary to think what Cam’s Pats could yet become.

Mike Jones: After 0-2 start, Eagles have real reason for concern on many fronts

11. Bills (12): Third-year QB Josh Allen followed the first 300-yard passing game of his career with the first 400-yard effort. Big test upcoming vs. Jalen Ramsey and Rams, who have allowed one TD pass so far.

12. Buccaneers (11): They’re not firing on all cylinders yet defensively, either, 2019 sack champion Shaquil Barrett still trying to get on the board.

15. Chargers (18): As part of his unexpected but impressive debut Sunday, rookie Justin Herbert became first Bolts QB to score a rushing TD since 2011.

16. Cowboys (15): How good was QB Dak Prescott in Sunday’s epic comeback, when he became the first player to ever pass for 400 yards while also rushing for three TDs? Suffice it to say even Skip Bayless was impressed.

17. Jaguars (26): James Robinson is off to as good a start as any undrafted running back in memory, racking up 210 total yards in his first two games after supplanting Leonard Fournette.

18. Colts (20): They continue to deal with their own rash of injuries but should soon get healthy against the Jets, whom QB Philip Rivers has beaten four times in five regular-season matchups.

19. Bears (22): WR Allen Robinson seems like a solid dude, but why is a guy who has caught eight of 18 targets for 107 yards making such a hubbub about his contract?

20. Falcons (17): A total implosion is kinda, sorta, somewhat understandable vs. Belichick and Brady. But Sunday’s meltdown in Dallas might be unforgivable. For context, per Elias, the previous 440 teams to score 39 points while going turnover-free won – a miraculous stat Atlanta has now sullied.

21. Browns (30): You won’t find a better tailback duo than Nick Chubb and Kareem Hunt, who are collectively averaging 6.2 yards per carry.

26. Bengals (28): And maybe there should be a hue and cry to bench Joe Burrow given the “protection” he’s getting … otherwise, rook is off to a stellar individual start.

27. Washington (24): Seems like owner Dan Snyder is OK despite being quarantined. Maybe for everyone’s sake, he should consider extended (permanent?) isolation period.

29. Eagles (25):Rampant issues here, but focus will intensify on struggling QB Carson Wentz, whose string of games with at least one TD pass ended at 20.

30. Panthers (29): Hard to reckon how rebuilding team recovers from extended loss of RB Christian McCaffrey, who generated nearly 44% of the 2019 offense.

31. Giants (32): Despite disheartening loss of RB Saquon Barkley, New York continued to show quite a bit of fight and nearly left Chicago with a victory.