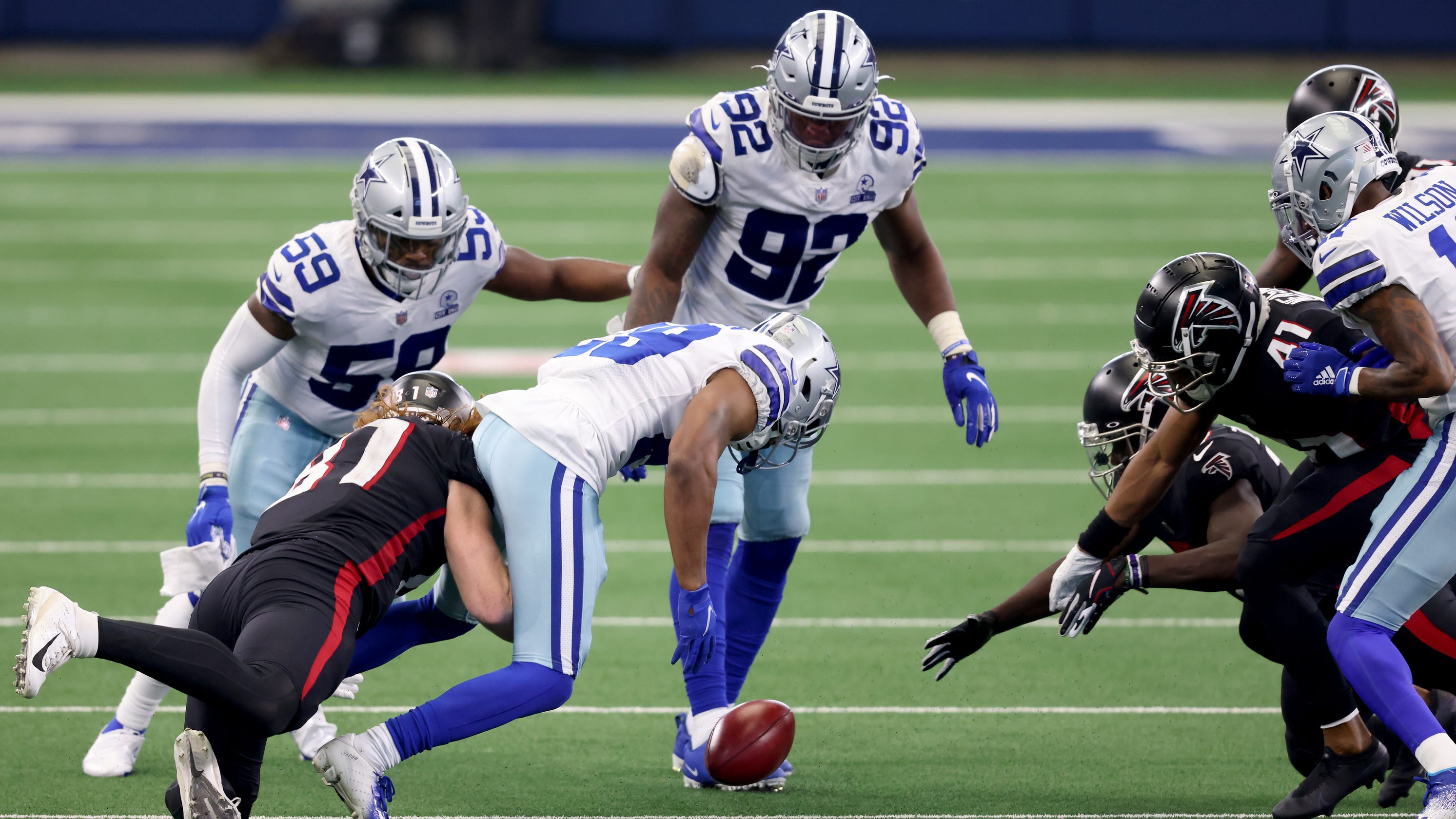 The Cowboys practiced it twice each of the last three Saturdays.

Six times, special teams players surrounded the edge of their 45-yard line, ready to pounce as soon as Greg Zuerlein’s slow-rolled onside kick crossed its requisite 10 yards. Six times, they readied themselves to field the kick with a technique Zuerlein had embraced after a 30-minute training camp session and a subsequent 50 or so reps.

For the Cowboys on Sunday, that was enough.

Zuerlein trotted out to midfield of AT&T Stadium on Sunday afternoon with 1:49 to play against the Falcons. A Cowboys team that hadn’t led all day was fresh off a Dak Prescott rushing touchdown that narrowed their deficit to 2 points. Dallas coaches and players flanked the sideline anxiously to see if the team could salvage a miraculous last-ditch effort on a game they later said they shouldn’t have won.

Zuerlein toe-tapped the ball left, spinning it just slowly enough for linebacker Justin March and defensive end Dorance Armstrong to finagle themselves underneath it while receiver Cedrick Wilson and cornerback C.J. Goodwin pursued the ball from behind. Goodwin hoped the unusual play would confound opponents enough that they “stand there looking crazy.” A scheme well-drawn to be “kind of playing that mind game” with the opponent, receiver Amari Cooper said.

“A lot of people were interested in,” Fassel tells us. “I’m not real interested in talking about it because it’s part of your…game plan.”pic.twitter.com/6bSoTzY8Fl

Goodwin dove into the pile and muscled away the loose ball from a pile of Falcons players including tight end Hayden Hurst, safety Sharrod Neasman and receiver Olamide Zaccheaus. Cowboys ball, two-minute drill, 54 yards from home. Prescott found CeeDee Lamb on the drive, the rookie receiver barreling 15 yards after the catch to advance Dallas 24 total and into field-goal range. Then, Dallas ran down the clock in preparation for Zuerlein’s eventual 46-yard game-winning field goal.

But long after Dallas escaped with a 40-39 comeback, Falcons owner Arthur Blank had questions.

C.J. Goodwin of the Dallas Cowboys recovers an onside kick against the Atlanta Falcons in the fourth quarter at AT&T Stadium on September 20, 2020 in Arlington, Texas. (Photo: Tom Pennington, Getty Images)

Blank, who watched the play intently from the opposite sideline while donning a black mask and gray suit, wondered about his players’ understanding of an onside kick.

“Clearly on the last play of the game yesterday our players, you know, didn’t do…either what they were instructed to do and they didn’t understand it,” Blank told SiriusXM NFL Radio on Monday. “It’s clear though they didn’t, in my view, they didn’t clearly understand what the rules were and exactly what they had to do.

“I think that’s demonstrated when you watch the video of it.”

Falcons coach Dan Quinn insisted his players knew that NFL rules permitted them, but not the kicking team, to down the slow-spinning ball before it’d crossed 10 yards. But no Atlanta player dove toward the ball before it reached the 45-yard line, Zuerlein achieving his goal “just to buy as much time as we could” for teammates to finagle encircle the twisting ball, ready to hop.

TFW when one of these teams can touch the ball before the 45 but neither does pic.twitter.com/3yfYKl2KSl

A Cowboys special teams unit that earlier failed to convert a fourth-and-4 fake-punt pass to Goodwin and a fourth-and-5 fake-punt run had executed a game-changing play.

“It was so bad so early, and to finish so high,” Fassel said. “It was the true agony of defeat, thrill of victory all wrapped in one possibility.”

The Cowboys became the first team in 441 tries to beat an opponent that had scored 39 without committing a turnover, per Elias. They became just the seventh in 1,882 contests the last 20 seasons to rally from a deficit of at least 15 points in the final five minutes of the game, per ESPN Stats and Info.

“It just goes to show you it’s never really over, and you have to be comfortable taking it down to the last play,” McCarthy said. “It’s just the reality of how competitive the NFL is.

“All wins are good wins.”