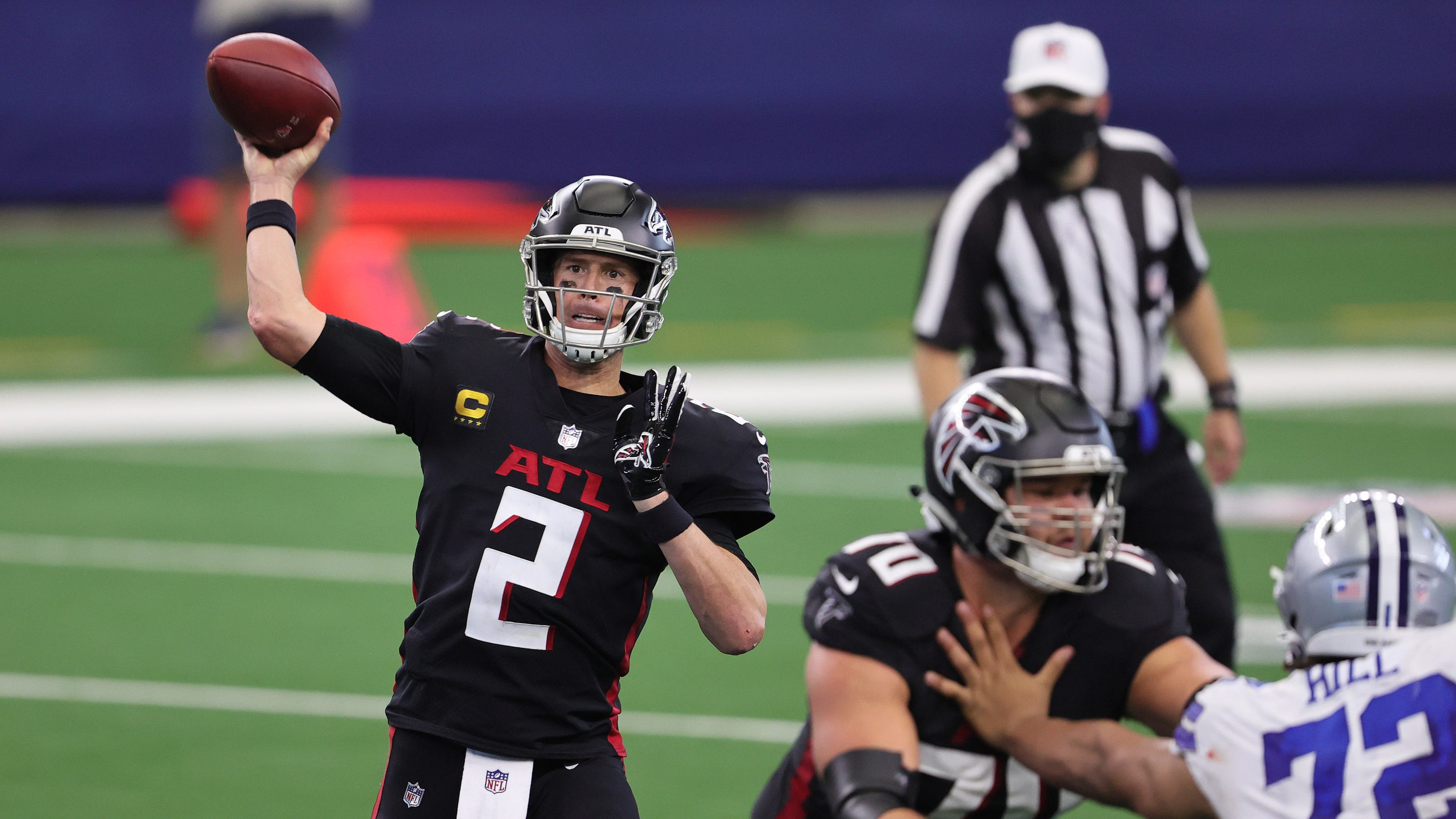 Falcons have historic collapse vs. Cowboys

Week 2 of the NFL season is nearly wrapped up and 10 teams left Sunday with a perfect 2-0 record.

Meanwhile, 11 teams are on the opposite end of that and will enter Week 3 looking for their first victory. Even though it’s still early in the season, some trends continued to become clear. The reigning Super Bowl champion Kansas City Chiefs can still seemingly score on any given drive and no lead is safe, the Atlanta Falcons still need to work on finishing games and Kyler Murray and the Arizona Cardinals may be one of the biggest surprises in the league.

For the third time in as many games, this matchup lived up to expectations. And both teams, really, should feel good about where they are. The Seahawks gutted out the 35-30 victory on quarterback Russell Wilson’s remarkable efficiency – he threw for 288 yards and five touchdowns, all to different targets – and the defense’s goal-line stand.

The Patriots have some obvious holes on their roster at receiver, tight end and in the secondary, but quarterback Cam Newton (30-of-44 passing, 397 yards, one touchdown, one interception and 47 rushing yards and two more scores on the ground) showed he is capable of carrying this team in even the toughest environments. But football fans may be the biggest winners here, with yet another back-and-forth, thrilling chapter to this series.

Yes, they lost their game, 23-20 in overtime against the defending champion Chiefs, but the Chargers have a lot of positives to take away even in defeat. Namely, the emergence of rookie quarterback Justin Herbert, whom the team took with the No. 6 overall selection in the draft, should give fans plenty of optimism for the future. Herbert was only playing because of a pregame chest injury to Tyrod Taylor, but he excelled and should take over the job permanently, though coach Anthony Lynn said after the game that the veteran would remain the starter if healthy. He completed 22 of 33 passes for 311 yards with one touchdown and one interception while adding a rushing score.

Also, defensively, the Chargers showed they have a relentless pass rush that flustered Chiefs quarterback Patrick Mahomes for the majority of the game. L.A.’s rush simply ran out of gas. Though the Chargers still have some issues to clean up – they had some breakdowns in coverage late in the game and Herbert had a few rookie mistakes, including an interception thrown across his body – L.A. showed it’s a young team that can compete if it stays consistent.

This has been a Baltimore strength since Lamar Jackson took over at quarterback, and the team’s 33-16 victory against the Houston Texans showed it will continue to be a focal point in 2020. The Ravens had three different ball carriers get at least nine carries. In all, Baltimore tallied 230 yards on 37 carries for 6.2 yards per rush.

The Ravens led the league in rushing last season and now appears to have four players who can slip past defenders: Jackson and running backs Mark Ingram, Gus Edwards and rookie J.K. Dobbins. That allows Baltimore to control game clock. Perhaps more frustrating for opposing defenses, however, is that if teams try to load the box, Jackson can burn them with his arm, too.

So much for the Pack being undervalued. In the second season under coach Matt LaFleur, quarterback Aaron Rodgers has been ultra-efficient and the running game has taken off with Aaron Jones. Green Bay doubled up the Lions, 42-21, and Rodgers has now completed 67.6% of his passes for 604 yards and six touchdowns in two games this year. And that’s even after the Packers infamously didn’t invest in a receiver corps that lacks depth.

This is the 3rd time in the Rodgers era that the Packers have scored 40+ points in back-to-back games.

Jones is averaging 6.9 yards per carry. And not only have the Packers the won their games with a high-production offense, they secured two quick divisional victories as they try to take the NFC North for the second season in a row.

Move over, 28-3. The Falcons raced off to a 20-point lead in the first quarter, held a 19-point lead at halftime and boasted a 15-point lead inthe fourth quarter. They lost to the Dallas Cowboys, 40-39, in utterly demoralizing fashion. That the Falcons seemingly forgot the rules of fielding an onside kick and stood around while Dallas waited for the ball to cross 10 yards was even more head-scratching.

The Falcons had 39 points with zero turnovers in their loss against the Cowboys.

Entering today, teams were 440-0 when scoring 39 points with 0 turnovers since 1933, when team turnovers were first tracked, according to Elias. pic.twitter.com/LZdqzwQZyD

The Falcons dropped to 0-2 and their defense, coach Dan Quinn’s supposed strength, has been the issue. Atlanta is scoring 32 points a game. The issue: It’s allowing 39, ranked dead last in the league.

Perhaps it’s time to worry about how Vikings quarterback Kirk Cousins will look this season after Kevin Stefanski, last year’s offensive coordinator, took the Cleveland Browns’ head coaching job. Minnesota’s offense sputtered in a 28-11 loss against the Colts, and the Vikings dropped to 0-2. Cousins completed only 11 of his 26 attempts for 113 yards with no touchdowns and three interceptions, leading to a QB rating of 15.9.

Under new coordinator Gary Kubiak, the rushing game has flopped. Last season, the Vikings ranked sixth in the league, averaging 133.3 yards per game. This season, Minnesota is averaging 107 yards per game, ranking 18th. The offensive line has struggled, as Cousins was under constant pressure. And after the trade of receiver Stefon Diggs – who is shining in Buffalo – Cousins simply doesn’t have weapons who are getting open often enough. In fact, Diggs’ 153 receiving yards Sunday are 58 more than the 95 net passing yards Minnesota registered against the Colts.

This is approaching the territory where Gase, the Jets’ second-year head coach, should strongly be thinking about backup plans should his time in New York get cut short. The Jets suffered an embarrassing 31-13 loss against the San Francisco 49ers, a team that lost several starters to injury, including quarterback Jimmy Garoppolo, running back Raheem Mostert, defensive end Nick Bosa and defensive tackle Solomon Thomas. Gase’s offense stalled and his play-calling were both unimaginative and uninspiring. For example, after the Jets were gifted great field position after an interception from Nick Mullens, New York faced a fourth-and-goal from the 7-yard line while down 21 points. Gase opted to kick a field goal.

Defensive coordinator Gregg Williams should worry, too. On the game’s first play from scrimmage, Mostert scampered away with an 80-yard touchdown run without being touched by a Jets defender. Later in the game, running back Jerick McKinnon had a 55-yard rush. That wouldn’t be so bad if it didn’t come on a throwaway play when the Niners were facing third-and-31.

Panthers running back Christian McCafrey (ankle) left his game against the Buccaneers. The Giants also fear to have lost star running back Saquon Barkley to a torn ACL during New York’s loss to the Chicago Bears, and receiver Sterling Shepard left the game with a toe injury. The Colts lost safety Malik Hooker to an Achilles injury and receiver Parris Campbell to a knee injury. Though it wasn’t a lower-body injury, Denver Broncos starting quarterback Drew Lock left the game with a shoulder injury after he fell awkwardly to the turf after a tackle against the Pittsburgh Steelers. And all of that happened before the 4 p.m. ET games kicked off.