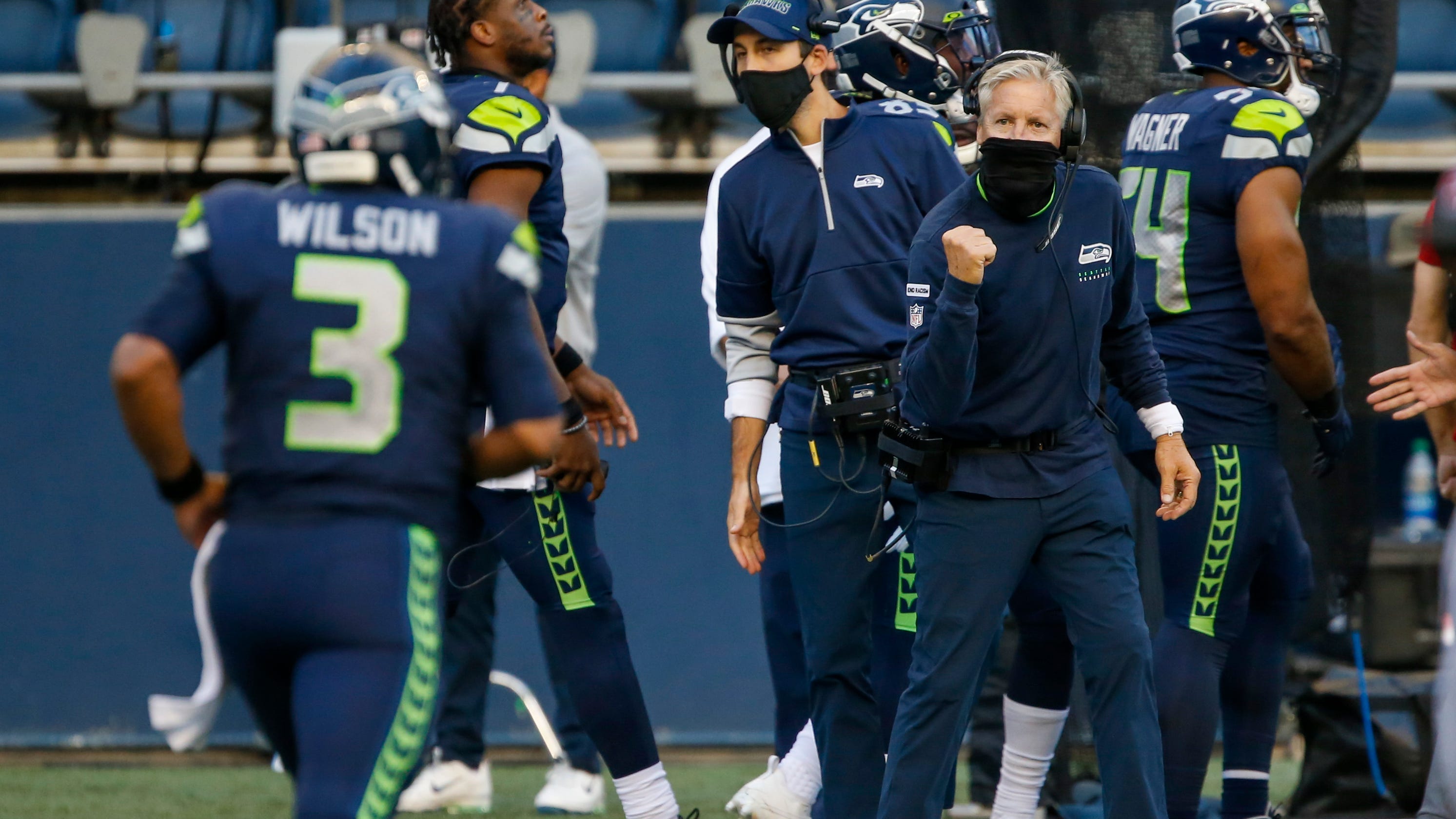 The shoe was on the other foot for the Seattle Seahawks to finish off the New England Patriots in another make-or-break goal line situation on Sunday night, and this time Pete Carroll wound up so relieved with a 35-30 victory that he gushed on about wanting to play the final snap again.

With two seconds on the clock, the Patriots had it at the 1-yard line, and Cam Newton took off on a patented power run toward left tackle that was stuffed without a prayer. L.J. Collier toppled Newton as reinforcements Lano Hill, Bobby Wagner and K.J. Wright swarmed to the scene.

Ballgame. The gang tackle for a 1-yard loss doused New England’s valiant effort to overcome a 12-point deficit in the final five minutes – and saved Seattle (2-0) from some major embarrassment.

“We worked too hard not to make that play,” Collier, a second-year defensive end, said afterward.

Maybe so. But Newton surely made them sweat in leading a march that began at the Patriots’ 19-yard line with 1:42 on the clock. He completed 5 of 7 passes for 63 yards, scrambled for 12 more and was the undeniable go-to option when it all came down to one play.

Why not fake a Newton run and let him roll out for a throw?

“Tried to go with our best play,” said Patriots coach Bill Belichick. “What else is there to think about?”

This is your new, post-Tom Brady offense, with the strapping Newton (6-5, 245) built for such moments. He rushed for two TDs on Sunday night to finish off drives, just as he did in his Patriots debut a week earlier.

Of course, the Seahawks were waiting on some type of Newton run. In the huddle, star linebacker Bobby Wagner told teammates to expect a power run to the right side of the defense.

Jamal Adams, the all-pro safety acquired in a trade from the Jets and who had never beaten the Patriots to this point, didn’t buy Wagner’s hunch. Adams expected that Newton would take the snap from the shotgun and run straight up the middle and leap to break the plane of the goal line.

Funny, Newton wondered about that option, too, seeing that the power run that had been so effective didn’t work in the end.

“Probably went to the well too many times,” Newton said. “I could’ve bounced it (outside), looking at the clip.”

Newton blamed himself for the outcome, but that’s a tough sell.

“Put in that situation, I’ve got to be better,” he said.

He also maintained he was thinking too much during the play. And he was still thinking during the aftermath, wondering whether he should have bounced outside or tried to dive over the top in the middle.

“As soon as you guess, you’re wrong,” he concluded. “The play was there. It was there all game long.”

Adams produced a slew of big plays, including chasing Newton down from behind to snuff out a Newton scramble in the third quarter that forced the Patriots to settle for a field goal. But when he saw Newton line up for the last play, he backed off his plan to meet the quarterback diving over the top. He knew Wagner had the proper beat on the play and quickly signaled as much to his middle linebacker.

It happens. Especially when the Seahawks and Patriots meet. 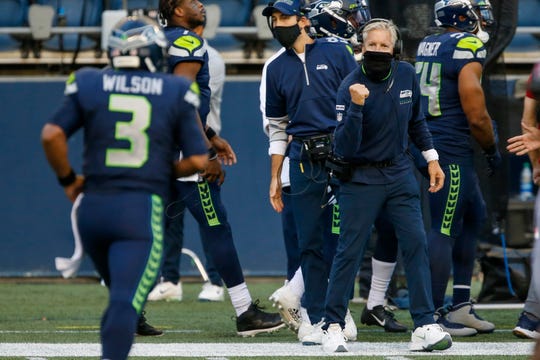 The game probably wouldn’t have come down a clutch defensive play as time expired had the Seahawks called for a running play on a third-and-1 decision from their 31-yard line on their final possession. Instead of running, Seattle called for a Russell Wilson pass – but the hot quarterback barely missed on a deep throw to Tyler Lockett.

After the ensuing punt, the Patriots (1-1) got the football back for the last hurrah that nearly doomed the Seahawks.

Trusting Wilson to throw is generally a good thing. He’s been on fire with his nine TD passes exceeded only by Patrick Mahomes (10) for most over the first two weeks of an NFL season. Wilson torched the Patriots for five scoring strikes, including a 54-yard, rainbow of a throw to DK Metcalf and a sizzling, 38-yard laser to David Moore. In two weeks, Wilson had thrown nearly as many TDs as he has incompletions (11).

Carroll said that on Wilson’s final throw, Lockett was the third option after the Patriots covered receivers on two shorter patterns.

That explanation still doesn’t cut it. Sure, Wilson could have put a dagger in the Patriots with one more completion after the two-minute warning had passed.

“It was so close,” Wilson said. “We just barely missed it.”

On a night when the Seahawks rushed for 154 yards, you’d also think that Carroll and offensive coordinator Brian Schottenheimer would have exhibited the trust to pick up one more yard on the ground. Instead, they flirted with blowing a double-digit lead down the stretch – only to have the defense bail them out.

All of which serves as another reminder of Carroll’s complex history with the Patriots, the team he coached before Belichick took over. The Seahawks lost Super Bowl XLIV when Carroll and Co. didn’t try to pound it in for a touchdown with Marshawn Lynch, aka “Beast Mode,” in the final seconds, only to have their chances for a Lombardi Trophy disintegrate with Malcolm Butler’s interception of Wilson.

No, the stakes were nowhere near as high on Sunday night, but Carroll similarly flirted with disaster.

This time, Seattle’s defense came through in the clutch. It’s no wonder Carroll wanted to play it again.

He should just hang tight and exhale. More make-or-break decisions are surely coming.