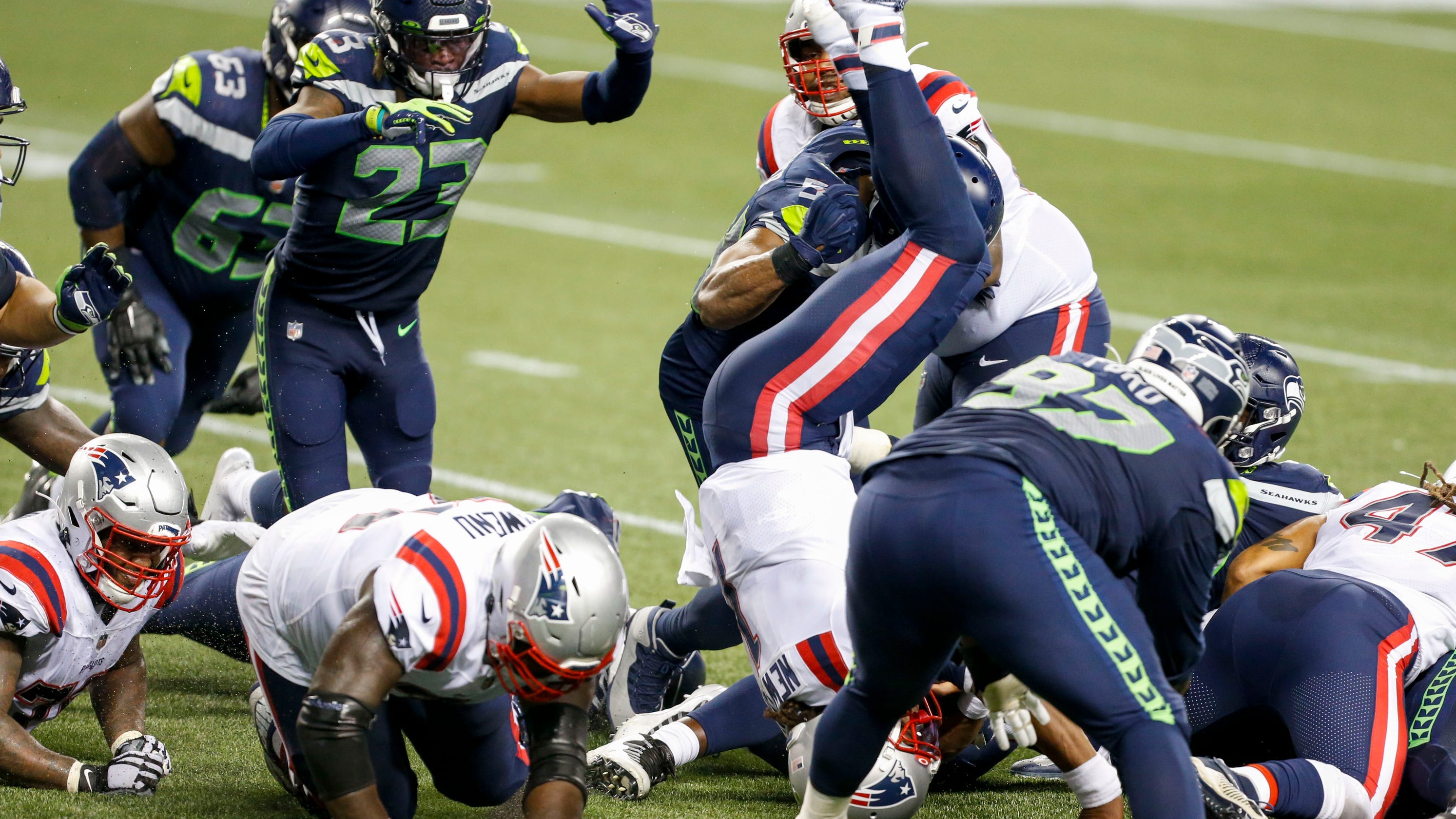 There were moments on Sunday when Cam Newton looked unstopped in the power formation.

The first two times it happened, the Seattle Seahawks couldn’t stop Newton. First, the Patriots quarterback followed behind fullback Jakob Johnson and left guard Joe Thuney to barrel into the end zone for a 1-yard run at 13:59 of the second quarter. It was the same again at 2:16 of the fourth quarter, when Newton ran in for another 1-yard touchdown run.

On Sunday night, with three seconds on the clock, the Patriots were standing on the goal line down, 35-30. Again, they went to the well, but the third time happened to be the charm for the Seattle defense. On this play, Newton again tried to follow the fullback and head to the left side. The Seahawks were ready, and he was met in the backfield by defensive end L.J. Collier, who secured the dramatic win for Seattle.

When it was all over, Newton watched that clip inside CenturyLink Field and was dejected. Sure, it was the same play, but he thought there was a way for the Patriots to win.

“I just didn’t make everybody right and that’s the only thing I regret,” Newton said. “In that type of situation, it’s humbling to be able to have the respect of a team to have the ball in my hands. I just have to deliver. I saw a clip of it; I could’ve made it right by just bouncing it (outside). I was just trying to be patient. Just thinking too much, man. Or even just diving over the top. There’s so many things that flashed over me.

“Playing a fast defense like that, as soon as you guess, you’re wrong. I’ll definitely learn from this. The play was there. The play was there all game. Moving forward, we just got to scheme up things and being put in that situation again, hopefully we can have a better outcome.”

After the game, some fans criticized the Patriots coaching staff. Should they have run a different play after showing the Seahawks this one on multiple occasions? Should they have spread receivers out wide to give Newton more options?

The Patriots did something like that earlier in the game. At 14:14 of the fourth quarter, they lined up in the power formation on the goal line. The Seahawks’ defensive line came barreling into the backfield, but Newton didn’t run. Instead, he took one step forward before throwing to his fullback, Johnson, who was wide open for the easy score.

If anything, the Patriots looked unstoppable in the power formation on the 1-yard line. That’s probably why offensive coordinator Josh McDaniels called the play again after a fantastic drive by Newton.

“That’s a play we had favored in the game plan – we ran it a couple times,” Newton said. “Figured, you know, probably went to the well one too many times, but at the end of the day, staff felt confident about it. We just have to execute and I could’ve bounced it – looking at the clip. I just got to be better. Got to be better here at the end. We put ourselves in position to win. When you do that, you’ve got to finish.”

New England Patriots quarterback Cam Newton (1) is tackled shy of the goal line for the final play of a 35-30 loss against the Seattle Seahawks at CenturyLink Field. (Photo: Joe Nicholson, USA TODAY Sports)

The biggest positive for the Patriots out of Sunday’s loss was Newton’s performance and final drive. He finished with 397 passing yards, which is the third most of his career. and the most he’s thrown in a game since 2011. For a quarterback who’s had two shoulder surgeries and a foot surgery in the last three offseasons, Newton looks healthy. That’s a huge plus for the Patriots.

In that final drive, the Pats started at the 19-yard line with 1:42 left in the game. Newton went 5-of-7 with 63 passing yards. As much as people talked about his ability on the ground in Week 1, Newton showed he can still sling it with the best of them on Sunday night.

“It’s many ways you can win in this game. We don’t want to become one-dimensional,” Newton said. “We had our opportunities. Just moving forward, we have a lot of things about being optimistic about but yet, we still have to get better. The reason why you play this game is for stat and one stat only. We didn’t get that statistic today and that’s the win. For us, this is a disgusting taste in my mouth. I’ve just got to grow and get better in this offense and hopefully have a better result next week.”