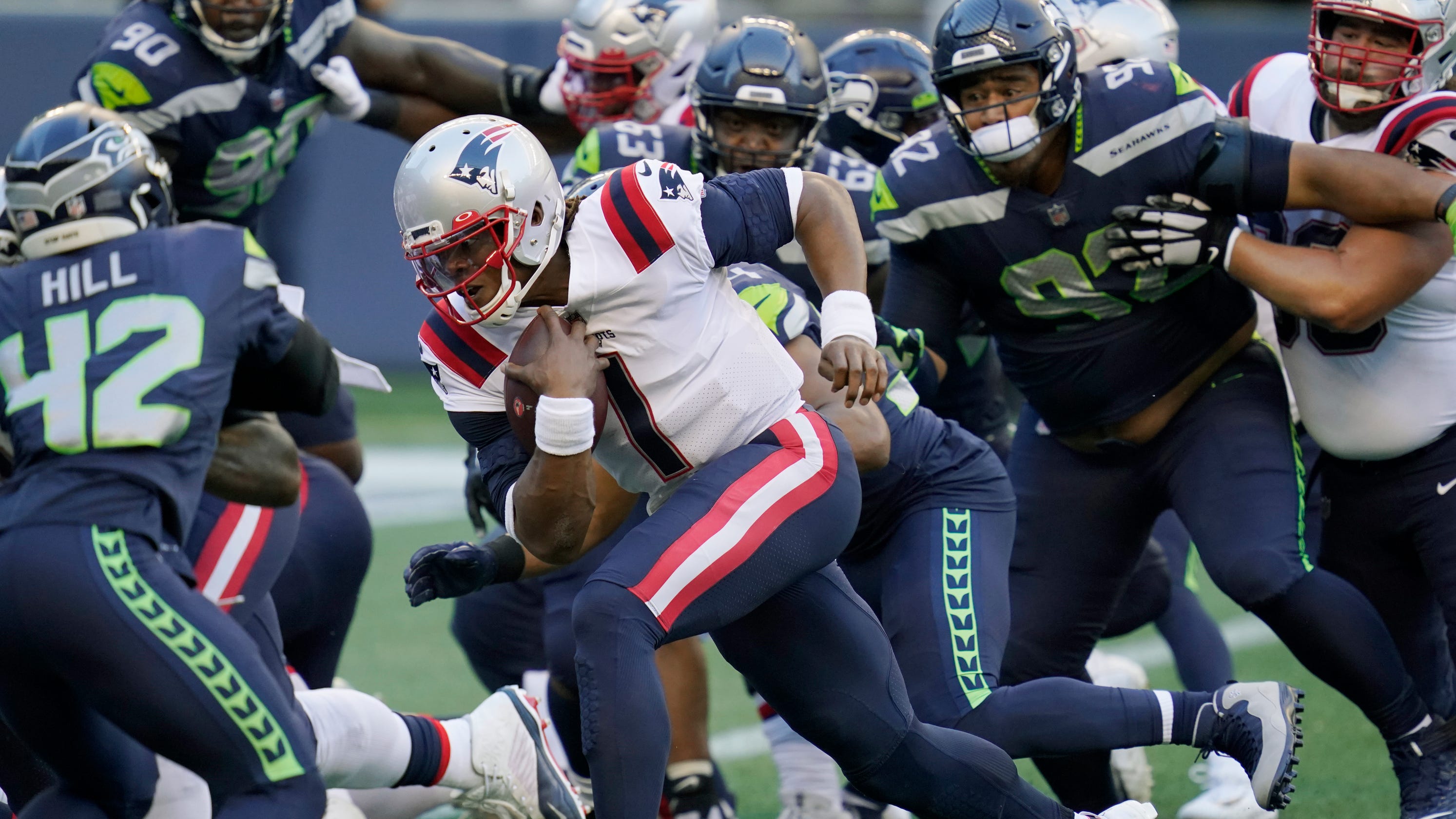 Russell Wilson overcame an early setback to torch the New England Patriots for 5 touchdown passes to lead the Seattle Seahawks to a 35-30 victory at CenturyLink Field on Sunday night.

No, one interception does not make a game. Wilson’s second pass of the game was intercepted by Devin McCourty and returned 43 yards for a touchdown. But Wilson bounced back in a huge way to keep the Seahawks perfect (2-0) and continue his torrid start to the season.

Wilson threw for 288 passing yards with two of his TDs – 54 yards to DK Metcalf and 38 yards to David Moore – demonstrating his prowess as the NFL’s premier deep-ball thrower.

In two games, Wilson has thrown for nearly as many TDs (9) as incompletions (11).

Still, it wasn’t merely a passing clinic for Seattle. The Seahawks rushed for 154 yards. And though they nearly squandered their lead in the final minutes, they neutralized Cam Newton when it mattered most, stuffing the quarterback on the final play of the game to seal the win.

New England Patriots quarterback Cam Newton (1) rushes for a touchdown against the Seattle Seahawks during the first half of an NFL football game, Sunday, Sept. 20, 2020, in Seattle. (Photo: Elaine Thompson, AP)

Three other things we learned from the Seahawks’ big win against the Patriots:

1. The Seahawks still have a problem in playing it safe to put away New England — As impressive as Russell Wilson was, it was still risky for Pete Carroll and Co. to bypass a run on third-and-1 in the fourth quarter and instead roll with a deep pass that kept the Patriots alive for a chance to pull out a comeback win. Didn’t they learn from the Super Bowl XLIX disaster against the Patriots – bypassing a Marshawn Lynch run at the goal line for a Wilson pass that was intercepted by Malcolm Butler – about knowing when to run? After Wilson’s incompletion to Tyler Lockett and the ensuing punt, Newton led New England to the 1-yard line for one final play with two seconds on the clock. The Seahawks survived this time, as Newton was tripped up for a loss. But it didn’t have to come down to that.

2. Jamal Adams was worth the price of acquisition for the Seahawks — By pulling the trigger to ship two first-round picks and Bradley McDougald to the Jets as part of the deal to land the All-Pro safety, the Seahawks figured they were obtaining a game-changing element that immensely bolsters their Super Bowl aspirations. This much was evident on back-to-back plays during a goal-line sequence in the third quarter. Adams broke up a pass over to middle to Julian Edelman, then chased down Newton as he sought to break out of the pocket on a scramble to force the Patriots to settle for a field goal. He also had a significant presence on blitzes and in run-support, including his drop of Rex Burkhead for a 4-yard loss on a third down in the fourth quarter. No, he wasn’t perfect. Edelman beat Adams for a 49-yard catch that set up a fourth-quarter touchdown (with Adams stuffing Newton on the two-point try). For a secondary that once ruled with Richard Sherman, Kam Chancellor and Earl Thomas as pillars for the Legion of Boom, Adams is so well equipped to lead a new Legion – especially whenever the Seahawks can sign him to a long-term extension.

3. Even the NFL’s best cornerback can be stung by a Wilson deep ball — It wasn’t so stunning that the Seahawks quarterback connected with Metcalf on a beautiful, rainbow of a 54-yard TD pass in the second quarter. Wilson has developed into the NFL’s best deep-ball thrower, with all of the supporting stats to squash any debate. Yet the shock factor on Sunday night was that Metcalf beat reigning NFL defensive player of the year Stephone Gilmore on the play. Gilmore hasn’t allowed a TD since 2018. According to ESPN, Gilmore was targeted 96 times last season without allowing a score.