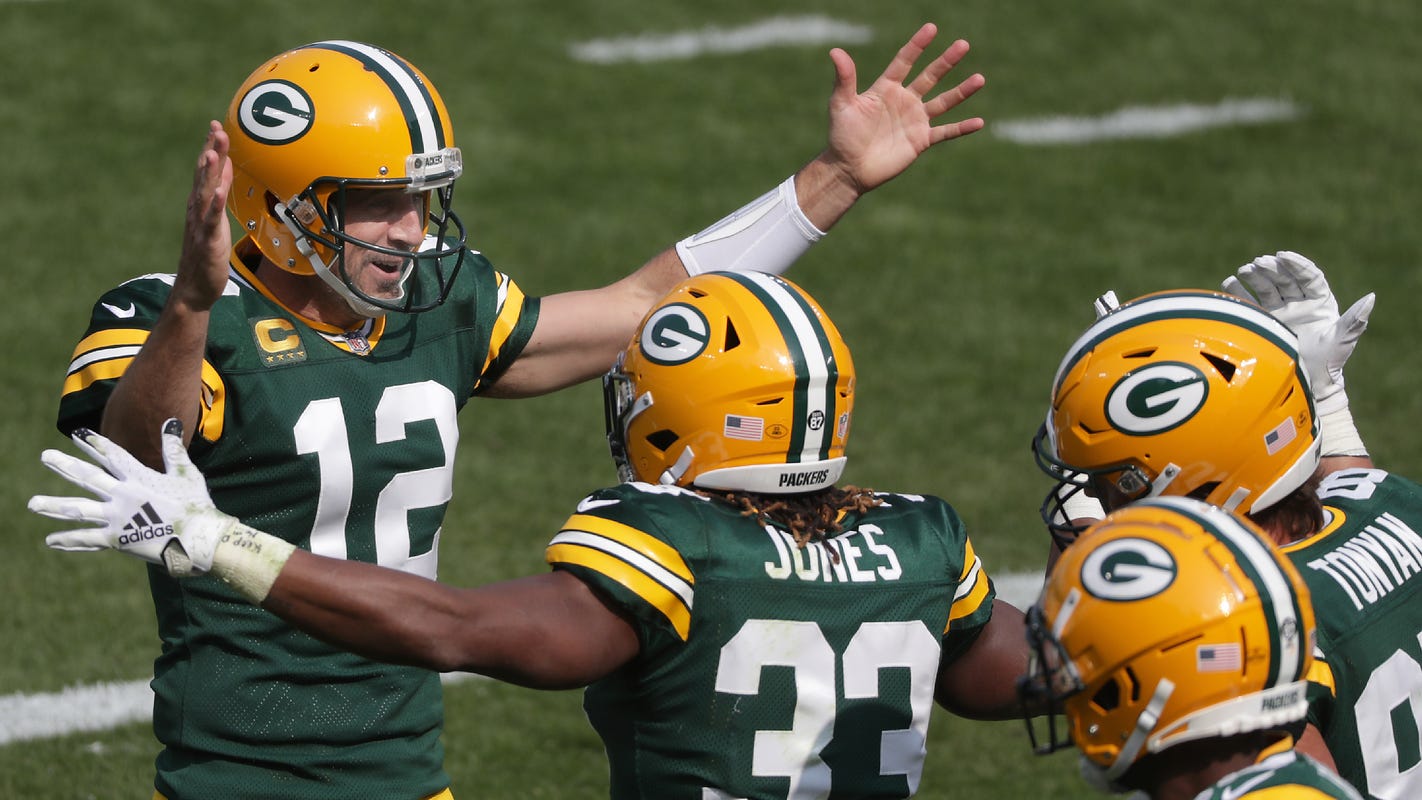 1. Despite the tsunami of coverage (including from USA TODAY Sports) you surely saw last year as the NFL celebrated its 100th season, the league didn’t actually turn 100 until Thursday – a full century after being founded in a Canton, Ohio, car dealership. Happy birthday, American Professional Football Association / National Football League.

2. Unfortunately, Sunday didn’t offer much reason to celebrate – despite several riveting games – with so many prominent players befallen by injuries. Giants RB Saquon Barkley appeared to suffer a serious knee injury in Chicago. Second-year Broncos QB Drew Lock didn’t return after hurting his throwing shoulder. Even Panthers RB Christian McCaffrey will need an MRI this week after banging up his ankle.

2a. But no team was plagued more than the defending NFC champion San Francisco 49ers, who are operating on the East Coast while playing successive road games against the Jets and Giants. The big concern centers on DE Nick Bosa, last season’s defensive rookie of the year, who was carted off with a potentially season-ending knee injury. Furthermore, neither QB Jimmy Garoppolo (ankle), RB Raheem Mostert (knee), nor DL Solomon Thomas (knee) finished the game – one that didn’t even involve limping TE George Kittle (knee) or CB Richard Sherman (calf), who’s on injured reserve. The Niners still whipped the hapless Jets to even their record at 1-1, but this is no way to mount a defense of the NFC West, perhaps the league’s most loaded division top to bottom.

2b. Garoppolo was credited with the win for San Francisco and is now 6-0 following a regular-season loss over the course of his seven-year career.

2c. Be honest, who knew Mostert was so exceptionally fast? After clocking in at 22.73 miles per hour during Week 1’s 76-yard TD catch – the fastest a ball carrier had been measured since 2018 – he hit 23.09 MPH on Sunday’s 80-yard TD sprint. While he was at it, Mostert became the first player in 50 years to score a touchdown of 75+ yards in each of the first two weeks of a season.

Raheem Mostert reached a top speed of 23.09 MPH on this 80-yard TD run, the fastest speed reached by a player over the last three seasons (since 2018).

Mostert is responsible for the two fastest speeds this season — He reached 22.73 MPH in Week 1.#FTTB | Powered by @awscloudpic.twitter.com/2h2jOtJGdP

3. After thoroughly establishing that the 49ers are 1-1, I’m contractually obligated to mention how dire matters are if your favorite team is 0-2. Since the NFL adopted a 12-team playoff format in 1990, 88% of teams starting 0-2 missed postseason … while 62% of teams starting 2-0 advanced to the playoffs. Yet oddly, since the league realigned in 2002, nearly 61% of teams that emerged from the blocks 0-2 or 1-1 reached the Super Bowl tournament.

3a. Reminder: The league is expanding to 14 playoffs teams this season, so … don’t read into these stats too much.

4. They let Brett Favre into Raymond James Stadium, and he modeled perhaps the greatest logo in NFL history. (Hint: Look a little closer, and you’ll notice that is not Bucco Bruce on Favre’s chest …)

5. Speaking of one TB12, Buccaneers QB Tom Brady joined Drew Brees as the only players in league history to pass for 75,000 career yards.

5a. More importantly to Tampa Bay fans, Brady won for the first time in a Bucs uniform – averting a personal four-game losing streak – and avoided the first 0-2 start of his 21-year career … even though he still didn’t play especially well, turning the ball over two more times to a suspect Panthers squad.

5b. Back to Favre for a minute – let’s take a minute to honor Colts QB Philip Rivers, who has now started 226 regular-season games in a row. Only Favre (297) has a better Iron Man streak.

6. Prayers to Patriots RB James White, who was inactive Sunday night after his father was killed in a car accident. White is one of the nicest (and most underrated) guys in the league. Just tragic that 2020 has dealt him yet another cruel blow.

7. Can you imagine the frenzy on sports debate shows, not to mention national and Metroplex radio waves, had the Cowboys started 0-2? It almost makes you wish they had …

7a. But credit QB Dak Prescott (TD pass, 3 rush TDs) and Co. for perseverance and pluck … and props to new Dallas K Greg Zuerlein for his sublime onside kick, a precursor to the game-ending field goal he drilled in the 40-39 comeback win.

7b. And, ICYMI, Skip Bayless now seems to be all about Prescott’s leadership. Talk among yourselves …

How bout that Dak Prescott? Love to watch him KEEP COMPETING. Playing from way behind, he battled and battled, threw for 450! Kept the Cowboys afloat. Then he was saved by a miracle onside.

8. Let’s also “credit” the Falcons for another magnificent come-from-ahead defeat. Where’s the four-minute offense? Who’s telling these special teamers that they should not let that onside kick go 10 yards? Why are they going for two up 26-7? How do you lose on a day you have a +3 turnover advantage and four separate leads of at least 15 points, the final one with five minutes to play?

8b. Also, try to imagine how much Jarrett Bell and I were puffing out our chests for three hours Sunday afternoon after picking the Dirty Birds …

9. Starting in 2018, the University of Alabama has had the most players on opening day NFL rosters each year, including 53 this season. Ohio State came in second in 2020 with 48 players beginning the campaign on Week 1 rosters. If only the Jets and Giants could be relegated in favor of the Crimson Tide and Buckeyes.

10. Speaking of former Ohio State players, Bengals QB Joe Burrow continues to look like the real deal – despite these unfamiliar defeats (to him) – completing a single-game rookie record 37 passes in Thursday’s loss at Cleveland.

10a. Sorry, LSU fans … love you, too. The Bayou Bengals had 41 players on Week 1 rosters – good for third place if it makes you feel better.

12. Packers RB Aaron Jones had 236 yards from scrimmage and three TDs on Sunday. QB Aaron Rodgers passed for 240 yards and two scores in a near-flawless performances. Tell me again why Green Bay needed a two-dimensional quarterback and one-dimensional running back in the first two rounds of the draft? 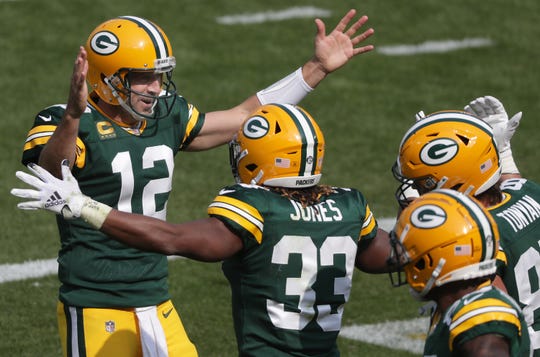 15. The Bengals have lost 14 straight games decided by one score … 10 since Zac Taylor became their coach last season.

17. Bills Mafia is very – very – protective of QB Josh Allen … please, take my word for it. But let’s give Allen deserved credit for crafting a career day in Miami, a performance that included 417 yards and four TDs through the air – both personal bests.

17a. But I should also remind Buffalo fans that their team finally draws a varsity opponent (Rams) next week, so let’s see what happens then …

18. Rodrigo Blankenship and Rigoberto Sanchez – has there ever been a duo of specialists with better names than these Colts?

19. Shoutout to the Jaguars, whom I didn’t expect much from in 2020 but came this close to a 2-0 start against AFC South foes. At least credit them for limiting Titans RB Derrick Henry (84 yards on 25 carries Sunday), who had torched Jacksonville for 397 rushing yards and six TDs the previous two times he faced the Jags in Nashville.

20. Good week for Chiefs QB Patrick Mahomes, who turned 25 Thursday – yes that makes him exactly 75 years younger than the NFL – before leading a Kansas City comeback against the Chargers on Sunday afternoon. Mahomes is now 9-0 in September starts and has never thrown an interception in a month when he has 28 TD strikes. He also improved to 13-1 all-time against AFC West competition.

21. The best Jet on the field Sunday? How about 49ers RB Jerick “Jet” McKinnon, who lit up the Jets for 77 rushing yards and a TD (on just three carries) while adding another 71 yards on three kickoff returns. Most remarkably, McKinnon converted a third-and-31 from San Francisco’s 11-yard line with a 55-yard gallop. Love it for McKinnon, who missed the previous two seasons after tearing an ACL and suffering subsequent setbacks.

22. Time to renew the Jared Goff vs. Carson Wentz debate, which doesn’t feel like it’s been that much of a debate since they went first and second, respectively, atop the 2016 draft? Goff was clearly the better player Sunday … when Wentz should have thrived given how effectively his line kept Aaron Donald in check.

23. Steelers QB Ben Roethlisberger tossed two TD passes in Sunday’s win over Denver, giving him sole ownership of eighth place on the all-time list (368) after he broke a tie with 2004 draftmate Eli Manning. Rivers, also drafted in 2004, is in sixth place after connecting for No. 399.

24. Cardinals QB Kyler Murray might just follow up his 2019 offensive rookie of the year performance with an MVP effort in his sophomore campaign after leading Arizona to a rare 2-0 start.

25. The Ravens may not need reigning MVP Lamar Jackson to repeat his 2019 wizardry to win a Lombardi Trophy following the 2020 season. Jackson had just 54 of Baltimore’s 230 rushing yards in Sunday’s win at Houston, while the Ravens defense scored its seventh TD since the 2019 campaign (most in the league over that stretch). Chiefs at Ravens in Week 3 should be a gem.

26. Who has worse luck than Tyrod Taylor? The Chargers quarterback was scratched Sunday after suffering a pre-game chest injury, allowing rookie first-rounder Justin Herbert to make his NFL debut. Taylor’s injury occurred two years to the day since he sustained a concussion while playing for the Browns, an injury that cost him his starting job after Baker Mayfield stepped into the breach. Given how Herbert showed out against Kansas City, Taylor may get relegated to backup duties yet again.

28. Not sure why Bears fans – or my buddy Nancy Armour – think Chicago should’ve drafted Mahomes in 2017. The Monsters are unbeatable with Mitch Trubisky … after two games … in 2020.

29. Good time to be a Collinsworth, NBC’s father-and-son duo of Cris and Jac getting to work “Sunday Night Football” together in Seattle.

29a. Good time to be a sexagenarian head coach, too. Pete Carroll, 69, and Bill Belichick, 68, became the oldest opposing coaches in NFL history while working “Sunday Night Football” together in Seattle.

30. When Week 2 wraps Monday night, all 32 NFL teams will have played one home and one road game. That had previously never happened since the 1970 merger.

31. The Raiders will officially open Las Vegas’ glistening Allegiant Stadium – also called the “Death Star” – Monday when they play host to the Saints. The venue will become the 188th to host a game in the league’s century-long history.

Getting ready for our debut. @Raiderspic.twitter.com/fuHx1R2NHr

32. Dear Odell Beckham Jr.: As a former serviceman, I don’t mind whether you stand or kneel during the national anthem – as an American, you’re well within your rights either way. But it does bother me when it instead seems your approach is to apparently crack wise with opposing players and talk throughout the performance of “The Star-Spangled Banner.” Let’s be better.