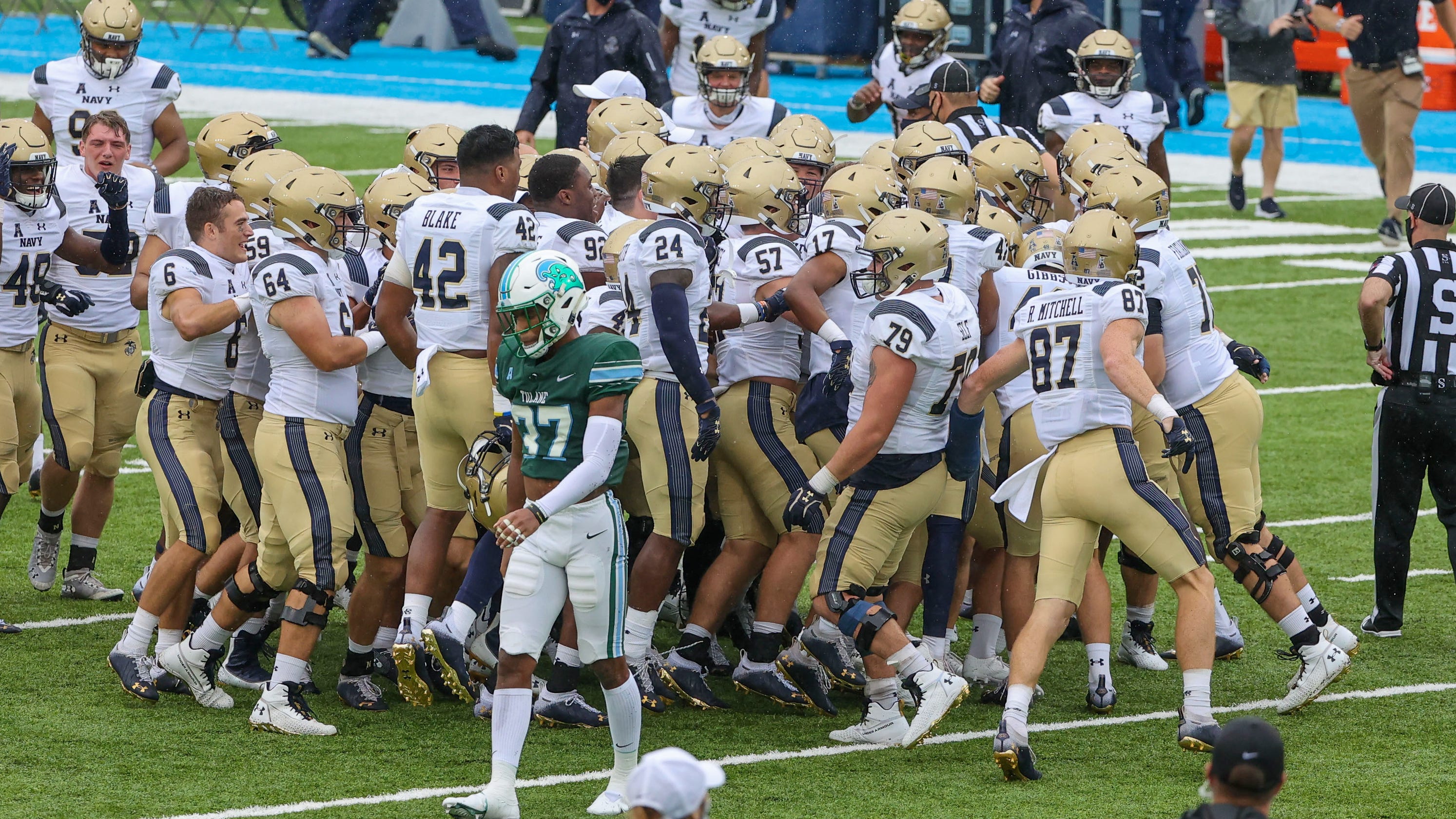 Tulane’s loss to Navy will sting, and Tulsa missed an opportunity

As college football fans, we are supposed to count our blessings. Against some fairly long odds, games are being played. The SEC season starts next week. After it looked like the Big Ten and Pac 12 were going to sit out until January, they are poised to join the party later in the fall. Given the circumstances, everything is great, right?

At least if you’re Tulane.

It’s one thing to say that this year is a freeroll with no pressures, expectations or disappointments. That just playing football is a win in and of itself.

But that idealistic view of what this season should be goes away pretty quickly when you cough up a hairball like the Green Wave did in a 27-24 loss to Navy.

Just imagine being in the Tulane locker room at halftime Saturday. You’re playing at home. You’re up 24-0 and seem to have total control over Navy, a team that managed just 59 yards in the first half and had been out-scored 79-3 on the season. You’re on the verge of being 2-0 and perhaps sneaking into the Amway Coaches Poll. You’re on the way to a potential dream season. And then, a couple hours later, it’s all over. Poof! Just like that.

MORE COLLEGE FOOTBALL: What we learned from Week 3

There is no way in the world a Tulane fan watching the first half Saturday could have seen what was coming. But just as the Green Wave came back from a 24-6 deficit in the opener to win at South Alabama, they handed the karma back with interest in the second half of this one.

Though the conditions in New Orleans were miserable with wind and rain, it’s still no excuse for Tulane starting the second half with four consecutive three-and-outs, getting popped with a safety after Navy backed them up to the 1-yard line and then failing to sustain a pair of drives late after the Midshipmen came back to tie it. All in all, Tulane managed just 82 yards on 25 plays after halftime and completely collapsed against a team that had shown no sign of life in the first six quarters of its season.

Tulane may still end up making a bowl game and putting together a season it can be proud of, but the memory of letting Navy get off the mat is going to linger a long time. That’s why Tulane is No. 1 in this week’s Misery Index, a weekly measurement of knee-jerk reactions based on what each fan base just watched.

Tulsa: Clearly the little brother of the state of Oklahoma’s FBS triumvirate, the Golden Hurricane simply doesn’t get many chances to knock off either Oklahoma or Oklahoma State. In 1996, they pulled a stunner against the Sooners — their only modern-era win in 15 tries. The last time they beat the Cowboys was 1998. So a win over Oklahoma State would have been a pretty big deal — and they could have gotten it Saturday as they led 7-3 entering the fourth quarter. But Tulsa blazed a trail of missed opportunities throughout the game, going 0-for-11 on third down, missing a 26-yard field goal and taking 15 penalties for 120 yards. Predictably, Oklahoma State found just enough in the fourth quarter to squeak by, 16-7, despite just 279 total yards of offense. When you do that to a Mike Gundy team, you should win.

South Florida: Despite three years of program atrophy under Charlie Strong, the Bulls have been scheduling as if they plan on being a factor in the future with non-conference series coming up against Alabama, Florida, Boise State, Louisville and Miami. And when the opportunity arose this year to snag a payday game against Notre Dame, the Bulls jumped on it in hopes of reprising their season-opening win in 2011. But let’s just say South Florida is not quite ready for prime time in its first season under Jeff Scott, the former Clemson co-offensive coordinator. Though Notre Dame will likely prove to be an elite team this season, the Bulls took a 52-0 loss and were effectively out of it after a first quarter in which they ran just nine plays and got behind by two touchdowns. The Bulls tried three quarterbacks, who combined to complete just 12-of-29 passes for 125 yards.

Georgia Tech: This entry is specifically related to one area of the Yellow Jackets’ team. While the trend lines are still pointing up for Geoff Collins’ crew despite a 49-21 loss to a very good UCF team, the field goal team has been a complete debacle with four kicks blocked in just two games. One of them was pretty costly against UCF, as Georgia Tech was poised to take a 10-7 lead early and instead couldn’t even execute a 27-yarder. That follows an opener at Florida State in which they had a 22-yarder blocked, missed a 38-yarder and had an extra point blocked. That’s a level of kicking futility that would embarrass even Alabama.

Appalachian State: Any Group of Five program can find a good coach. When that coach leaves, it’s probably a coin flip whether the replacement can sustain a similar level of success. But for programs like Appalachian State, hiring three good coaches in a row is often the breaking point. It’s way too early to make a judgment on Shawn Clark, the former offensive line coach who succeeded Scott Satterfield and Eli Drinkwitz. But Saturday’s surprising 17-7 loss to Marshall is the kind of game that could turn out to be an early signal that the Mountaineers’ run of dominating the Sun Belt is coming to an end.

North Texas: Defense has been a problem for the Mean Green, which is why coordinator Troy Reffett was replaced after last season. But it appears the defense is still a problem under new coordinator Clint Bowen — a big problem. North Texas gave up 710 yards of offense in a 65-35 loss to SMU. Everyone loves high scoring games these days, but that is a few steps over the line of watchable football.

Duke: David Cutcliffe is one of the most respected offensive coaches in the country, but managing 19 total points in the Blue Devils’ first two games is a big red flag for the rest of this season. Duke’s hopes this year were pinned on transfer quarterback Chase Brice, a longtime backup at Clemson. But in Saturday’s 26-6 home loss to Boston College, Brice threw the ball 42 times and only ended up with 217 passing yards and two interceptions. That’s a recipe for a very frustrating season, even at a program where fans don’t expect too much.

Southern Miss: The Golden Eagles’ program has had a pretty brutal offseason, with a slew of transfers right before the first game and a coaching change after losing to South Alabama in Week 1 when Jay Hopson stepped down. But instead of hitting the reset button Saturday, Southern Miss just sunk further into the hole of self-doubt as Louisiana Tech scored a touchdown with 14 seconds left to steal a 31-30 win. The Southern Miss defense allowed three third-down conversions and a fourth-down conversion on the 17-play, 74-yard drive that won it for Louisiana Tech.

“The game is rigged. It’s proven. This has to stop” – InsideTulsaSports.com

“Why USF football will not recover and why Jeff Scott is a Victim” – thebullspen.com

“Time to move on from Cut” – TheDevilsDen.com