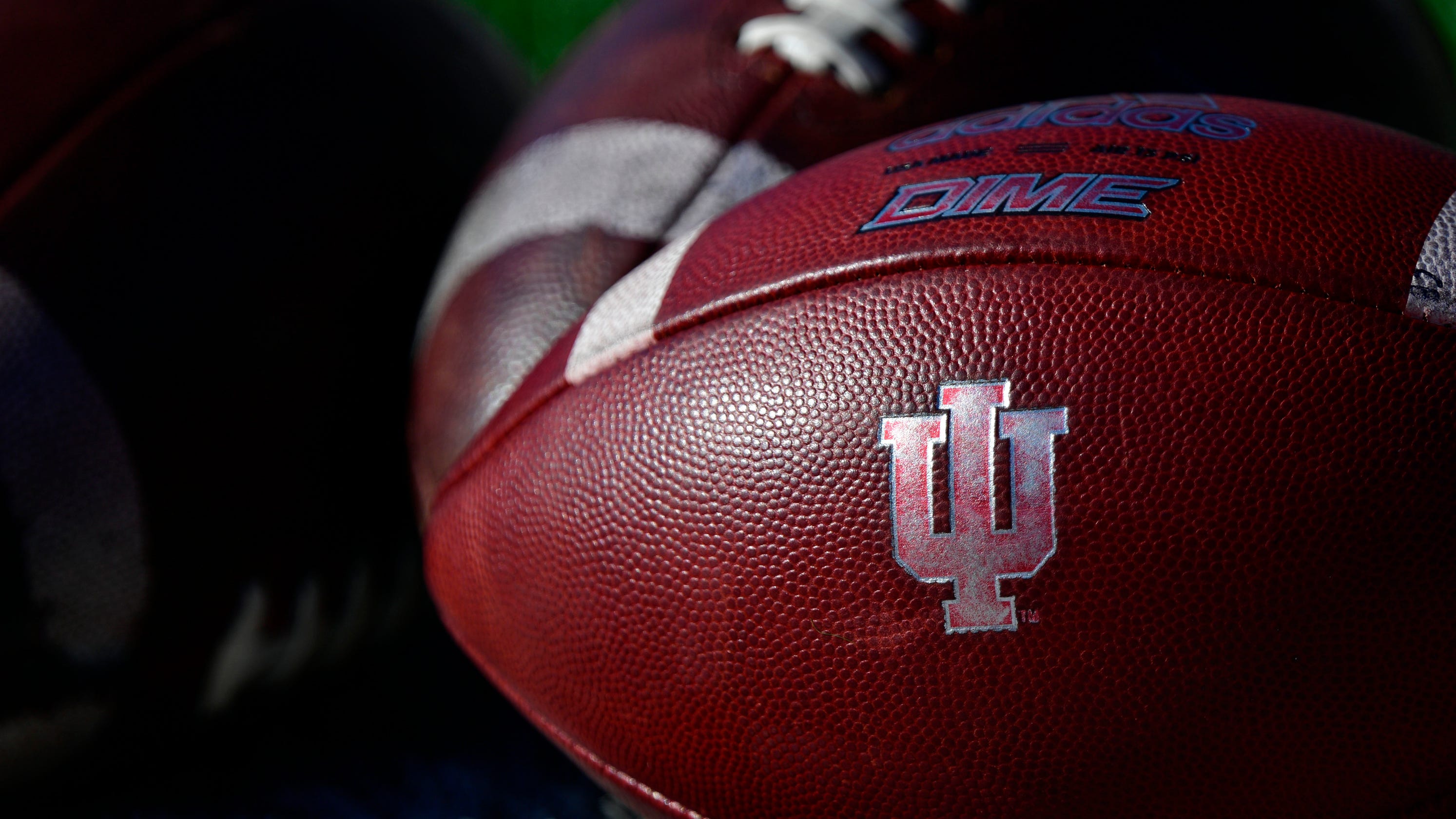 BLOOMINGTON – College athletics’ richest conference is in the midst of a generational financial crisis.

Iowa and Minnesota have eliminated sports. Purdue and IU are planning significant furlough programs. Some schools are talking about shortfalls reaching $100 million.

The Big Ten’s decision to restart football floats a monetary life raft to its ailing departments. Returning to football means reopening the conference’s most lucrative revenue stream, at a time when guaranteed income is a godsend.

Still, it won’t be a silver bullet for departments’ financial concerns, and Indiana is no exception. There remains a significant hole in Big Ten athletic budgets that an abbreviated nine-game football season alone can’t fill. So, just how much did this week’s news affect the financial forecast, in Bloomington across the conference? 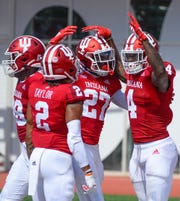 The Indiana Hoosiers celebrate after linebacker Cam Jones (4) scored a touchdown during the game against UConn at Memorial Stadium in Bloomington, Ind., on Saturday, Sept. 21, 2019. (Photo: Bobby Goddin/For IndyStar)

Turning the TV revenue spigot back on means restoring the biggest piece of Indiana’s athletics budget.

In the fiscal year 2019, Indiana’s media and television revenues exceeded $43.6 million, or roughly 34% of total revenue. The previous year, that number was closer to 33%, but in each case it still came in larger than the next-closest categories, contributions and ticket sales. That’s according to financial reports submitted annually to the NCAA and obtained by IndyStar via records request.

Tie in the fact that, per football coach Tom Allen’s understanding, the Big Ten bowl field remains intact. NCAA reports began breaking out bowl revenue as a separate line item in 2019, a year in which Indiana reported more than $7.1 million in that category.

Big Ten bowl revenue is not predicated entirely on reaching the postseason — the conference pools bowl revenues and hands each school at least some of it, regardless.

With just eight weeks to complete eight games before the Big Ten title game, the conference is leaving itself with no wiggle room for postponements or cancellations in terms of completing a full season. But it might yet realize full television revenue either way.

Television contracts are negotiated in part based on inventory — conferences promise broadcasters and distributors a certain number of games, at a minimum, to fulfill their obligation. With the Big Ten scheduled to play eight games, plus Michigan coach Jim Harbaugh’s popular idea of adding a ninth based on cross-divisional conference finish, the league could leave itself enough breathing space to fulfill its inventory and get full television payouts.

“My gut tells me if they play games, they’ll get their full payment,” said Patrick Crakes, a former vice president at Fox Sports who now runs his own consulting firm. “In this environment, I think if the Big Ten comes back and plays eight games and their championship game, they stand a good chance of (getting full payment).”

The were suggestions in the build-up to Wednesday’s announcement that the conference had worked closely with broadcast partners — including Fox and ESPN/ABC for football — over a workable plan for the coming season, which will not see fans in the stands at any Big Ten game.

Those relationships, already strong by long association and mutual benefit, will be crucial in completing an unprecedented season, which will contain a maximum of 63 games, including the Big Ten championship game.

Restoring the football season also bolsters the other major arm of the conference’s television revenue package, the Big Ten Network, which it operates in partnership with Fox. Without football (or fall sports more generally), BTN would have struggled badly for programming, and advertising as well.

In the conference’s current media setup, it pulls in $440 million from external partners, but also more than $100 million from BTN-specific revenue. Restarting football strengthens that revenue stream once again.

And all this puts advertising dollars back on the table as well. Crakes estimated the conference might see 60-70% of that revenue restored to what it would have been under normal circumstances.

Ultimately, based on its most recently available figures, Indiana could bring in anywhere from $40-60 million in revenue if the season (bowls included) can be played. Those numbers improve if the 2020-21 men’s basketball season, which the NCAA is working intensively on, can be completed as well.

There are still some substantial holes in the budget, some more quantifiable than others.

The department also reported almost $8.3 million in non-program specific revenue in that last category in 2019. It’s possible a portion of that could also be tied to attendance in football and men’s basketball.

These numbers, added up, still present serious financial challenges for Indiana. And keep in mind, their impact would only grow at schools with more robust football fan support, like Ohio State, Michigan, Iowa and Wisconsin, which are accustomed to even greater gameday revenues.

What has the potential to be the biggest blow is harder to estimate: How much money will departments lose in contributions?

Big donations are often courted through home football and basketball games, and other hospitality events tied to those. For the foreseeable future, there are none. Couple that to the wider financial uncertainty created by COVID-19, and it would be understandable for Indiana to brace itself for a downturn in what has been a significant source of revenue in recent years.

There is precedent for that.

IU has reported an increase in year-on-year contributions in every NCAA financial report since 2012, and the department topped out with a record $28,695,452 in FY19. Those contributions have driven everything from scholarship endowments to facilities expansion to salary increases and more.

But the department saw a dip in contributions after the 2008 financial crisis, reporting $18.4 million in FY10 but then almost $3 million less the next year. It took Indiana five years to get back to the 2010 total.

What can Indiana do?

Athletic Director Scott Dolson dedicated most of a half-hour virtual sit-down with IndyStar last week to discussing the state of his department’s finances. Little — if anything — else weighs heavier on his mind.

“What we did from the beginning and what we’re continuing to do is really try to take as much time to gather as much information as possible before pulling any levers,” Dolson told IndyStar. “There’s so much uncertainty right now.”

Dolson was speaking before the Big Ten formally announced its football restart, but he acknowledged there would be financial challenges whether football and men’s basketball season could be completed this academic year or not.

New IU athletic director Scott Dolson talked with local media ahead of football camp kicking off amid the COVID-19 pandemic.

“Where we are today is still really in the fact-gathering,” Dolson said last week. “We know we’re going to have a major hit. We know it’s going to be substantial. But we don’t know how big the hole’s going to be yet”

The department has already taken numerous steps toward financial security, dating as far back as the summer.

An internal memo obtained by IndyStar in June outlined about $11.8 million in savings IU athletics had already achieved through a variety of means. Those savings — specifically outlined as 10% of expected operating expenses — brought the budget into balance at that time, suggesting expected 2020-21 fiscal-year expenses of around $107 million.

In late August, Indiana announced a significant furlough arrangement, which will require all employees to take at least two weeks of unpaid furlough between Oct. 1-June 30. Dolson told IndyStar the desire was to “share in the pain” across the department where possible.

Parts of the department whose responsibilities are most directly tied to gameday activities — ticket sales, event management, etc. — could see their workload reduced by 50 or even 100% through the furlough structure.

Large-scale borrowing is a mitigation strategy many Power Five schools and conferences are embracing this fall. The Pac-12 has set up a league-wide program allowing schools to borrow as much as $83 million, according to a report in the San Jose Mercury News, and Iowa recently announced it was in the process of securing a $75 million loan.

Dolson didn’t commit to anything but suggested Indiana athletics would work closely with the university on any strategy so significant in scale.

“We’re not an island in terms of working closely with the university in figuring out, how do we fill the hole in the short term and then pay that back over time?” he said. “Our loss this year will be significant enough that we need to fill it somehow. Certainly, borrowing money is an option with regard to that.”

Dolson underscored that cutting sports, an action already taken at other Big Ten universities, would be a last resort. But he also reiterated multiple times that Indiana would rule nothing out in striving for financial stability.

“You really hope you can find strategies you can mitigate this year,” he said. “Most importantly, we’ve got to make sure that moving forward, we can operate and be sustainable. …

“You hope we can find other strategies, but just like every other school in the country right now, you have to have everything on the table.”