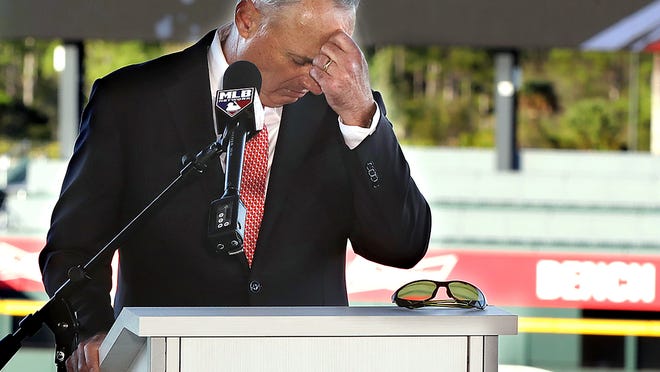 
SCOTTSDALE, Ariz. — Under blistering criticism from players unhappy with his handling of the Astros electronic sign-stealing scandal, Major League Baseball Commissioner Rob Manfred offered a qualified mea culpa Tuesday – but also pointed at the players’ own union as sharing the blame.

Some players, most vociferously the Dodgers’ Justin Turner, have expressed outrage over Manfred referring to the World Series championship trophy as “a piece of metal’’ as he made the media rounds Sunday. Manfred was trying to explain MLB’s approach to the misdeeds perpetrated by the Astros, who were found to have used a video-based scheme in 2017 – the year they won the championship – and part of 2018.

Unprompted, the game’s top executive acknowledged his blunder when he addressed members of the media covering spring training in Arizona.

“In an effort to make a rhetorical point, I referred to the World Series trophy in a disrespectful way and I want to apologize for that,’’ Manfred said. “There’s no excuse for it. I made a mistake. I was trying to make a point but I should have made it in a more effective way.’’

More:Rob Manfred, MLB seek closure to Astros sign-stealing scandal that might not have any

He was quite effective in conveying the message that the MLB Players Association hamstrung any efforts to penalize Astros players who participated in the electronic stratagem.

While Houston was fined $5 million and lost its first two draft picks in each of the next two years – as well as general manager Jeff Luhnow and manager A.J. Hinch, who were suspended and subsequently fired – its players were not disciplined.

The level of anger expressed by their peers on other clubs even surprised Manfred, an MLB executive for more than 20 years who said the union declined to grant cooperation from the players unless they received blanket immunity. Manfred said his office initially offered immunity for only some, but the MLBPA would not budge.

“One of the principal complaints seems to be that the Houston players were not disciplined,’’ Manfred said, “and that lack of discipline and immunity was negotiated with the union that represents the players.’’

The MLBPA said in an email to USA TODAY that it would issue a response to Manfred’s comments later Tuesday night.

‘Sick to my stomach’:Cheated out of an MVP and a pennant, Aaron Judge sounds off on Astros

Braves veteran on Astros scandal:‘Every single guy over there needs a beating’

Other points made by Manfred in his half-hour session with reporters, nearly all of it dedicated to the Astros scandal:

—The league’s initial investigation, launched soon after former Houston pitcher Mike Fiers revealed the scheme in November, did not progress and would not have yielded sufficient information without player cooperation. Hence, the agreement to grant immunity.

—The Astros have not been the only team accused of breaking the rules to steal signs, and all the complaints were investigated. That being said, Manfred acknowledged the difficulty of extracting information about what players do in the inner sanctum of the clubhouse.

—Baseball took preventive measures to deter electronic sign-stealing, including putting monitors in video rooms and recording conversations on dugout phones, and found them to be effective.

—Manfred could have set a precedent by vacating the 2017 title but was concerned that would open the door to future reversals of events on the field.

“I just think it’s an impossible task for an institution to undertake,’’ he said.