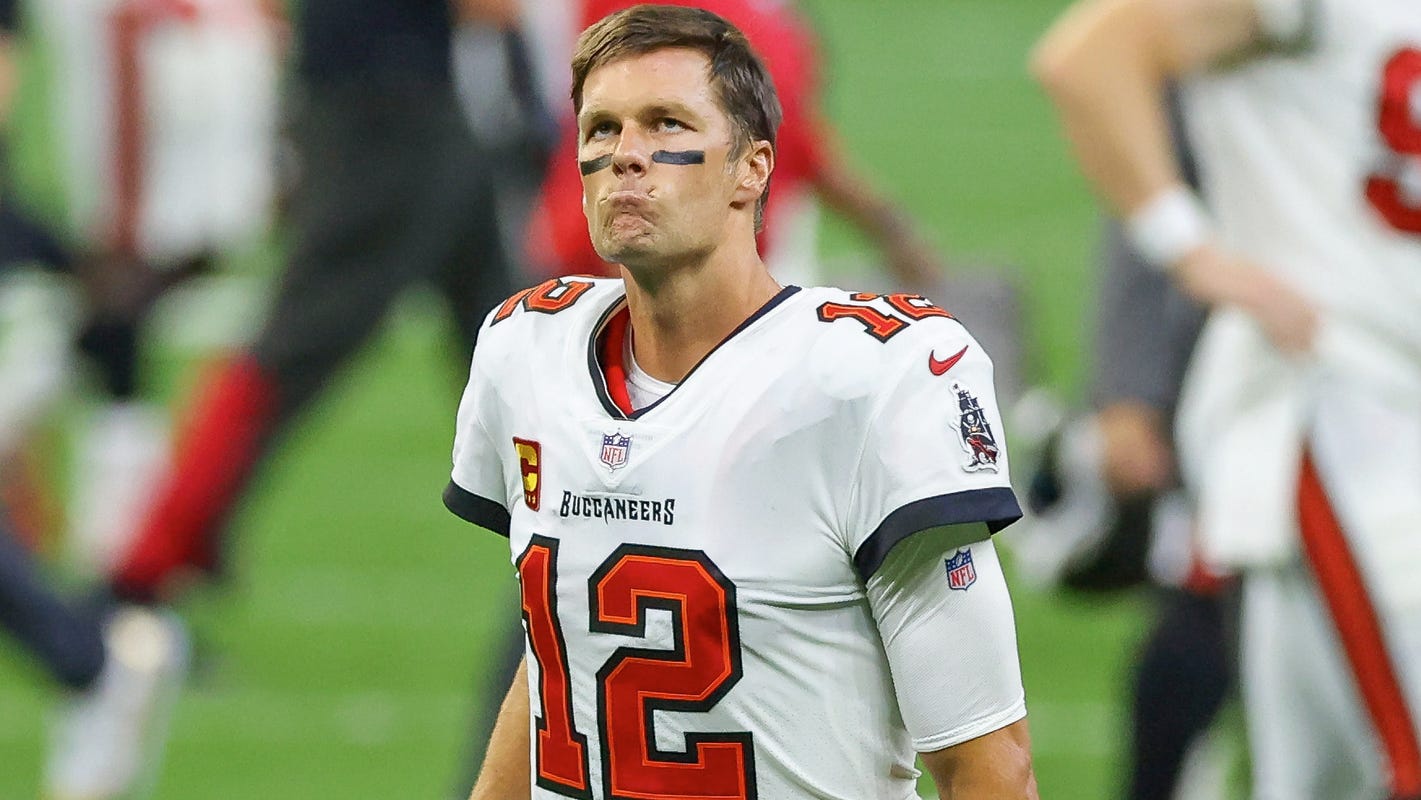 If Tom Brady and the Bucs drop to 0-2, buckle up

After stumbling through his debut with the Tampa Bay Buccaneers during the season opener at New Orleans, the iconic quarterback is suddenly staring at the possibility of starting a season 0-2 for the first time ever. No, the New England Patriots never dropped their first two games during Brady’s 20 seasons.

But he’s a Buc now, which was evident by the self-inflicted blunders — including an NFL-high nine penalties — that helped doom Tampa Bay against the Saints.

Brady did his part, too, throwing two picks, including his third pick-six in as many games, dating to last season. It drew public criticism from Bucs coach Bruce Arians, who is quite different than buttoned-up Bill Belichick when it comes to from-the-heart news conference reaction.

“He’s a coach. I’m a player,” Brady said with some incredible insight. “Just trying to win a game.”

Tom Brady walks off the field after a 34-23 loss to the Saints. (Photo: Derick E. Hingle, USA TODAY Sports)

In any event, the Bucs will face the Carolina Panthers in their home opener on Sunday with Brady and the entire operation getting a chance to demonstrate that Week 1 was merely a speed bump. Brady surely needs time to develop chemistry in a new system. But if they start 0-2, the sky just might start falling for a team needing to live up to much hype.

A quick read on other items of interest as Week 2 rolls on in the NFL:

Who’s hot: Russell Wilson. The “Let Russ Cook” campaign sizzled in the season opener as the Seahawks quarterback seared the Falcons for 322 yards and four TDs. Wilson threw 35 passes (31 completions) and ran just 20 times, the type of ratio they’ve rarely had but are capable of unleashing when armed with such a “danger-russ” quarterback. The defining moment in Week 1 came on a fourth-and-five from the Falcons’ 38. Not surprising that they dismissed the option to try a 56-yard field goal and went for it.

But it was absolutely stunning that they didn’t merely go for it — they went for broke with Wilson launching a 38-yard TD to DK Metcalf. A tougher test comes on Sunday night against an elite Patriots secondary featuring cornerback Stephone Gilmore and safety Devin McCourty. So balance will likely be the ticket. But sometimes, too, if the quarterback can cook, turn up the heat.

Pressure’s on: Carson Wentz. After getting sacked eight times in the season-opening loss at Washington, the Eagles quarterback (and his injury-thinned O-line) gets quite the consolation with the L.A. Rams coming to town. L.A.’s pass rush is built on the back of Defensive Player of the Year Aaron Donald, which is why the Eagles will sorely miss Pro Bowl guard Brandon Brooks (out for the year, torn Achilles). It should help that Philadelphia’s best O-lineman, right tackle Lane Johnson, is set to return. Ditto for running back Miles Sanders. But so much is out of sync. Wentz, who threw two picks at Washington, must resist the temptation to try to do too much. As bad as his team needs him, he also needs as much support as he can get.

Key matchup: J.J. Watt vs. Lamar Jackson. Another week, another MVP quarterback for Watt and the Texans to try to contain. It didn’t quite work out in Week 1 against Patrick Mahomes. Houston sacked Mahomes just once. Now comes Jackson with a similarly versatile Ravens offense. The Texans need a monster game from their three-time NFL Defensive Player of the Year in the worst way.

Next man up: Replacing injured star receiver Michael Thomas in the Saints offense — yet to be officially ruled out for Monday night in Las Vegas as he recovers from a high ankle sprain — won’t be a man-for-man exchange. Thomas led the NFL with 149 catches and 1,725 receiving yards last season. You don’t find that type of production on the street. Or on the bench. In one sense, second-year pro Deonte Harris gets to play a larger role on the other side of newcomer Emmanuel Sanders.

Yet Saints coach Sean Payton, who won all five games last year when Teddy Bridgewater filled in for an injured Drew Brees, typically finds creative ways to adapt. In the Week 1 win against the Bucs, when Thomas caught just three passes for 17 yards (obviously the ankle was a factor), the Saints relied heavily on agile tight end Jared Cook. There’s also the ability to create mismatches in the passing game for running back Alvin Kamara. And then there’s the ultimate X-factor: Taysom Hill. Thomas will be missed, but the cupboard is not bare.

Stomach for an upset: Falcons at Cowboys. The stage is set for a shootout at Jerry World, considering the 506 yards of offense Atlanta produced against Seattle. Matt Ryan passed for 450 yards and had three receivers post 100-yard games, including the magnificent Julio Jones. So here comes a stress test for an injury-stung Dallas defense. The Cowboys are favored by four points, but maybe a better bet would be that the last team with the ball wins.

Rookie watch: Clyde Edwards-Helaire. The Chiefs rookie running back rushed for 138 yards in his NFL debut, exemplifying a rich-get-richer flavor as he finished Week 1 as the league’s rushing leader. It’s reminiscent of Kareem Hunt’s first game in 2017, when he ripped off 148 yards to set the course toward an NFL rushing crown. The knock on Edwards-Helaire, heading into Sunday’s matchup at the L.A. Chargers, comes near paydirt. In six carries in goal-to-go situations against Houston, Edwards-Helaire mustered all of minus-2 yards. It figures he’ll get more opportunities with arguably the league’s most prolific offense.

The road to Super Bowl 55 goes through… Green Bay? Sure, it’s way too early to project playoff brackets, but with just one team in each conference pegged to get a first-round bye this season in an expanded postseason field, the value of the top seed has increased. The Packers were embarrassed in the NFC title game last season, but it was played in San Francisco and followed their pattern of terrible football in California last season.

Imagine if Green Bay can get back to the title game and host it at Lambeau Field. Aaron Rodgers’ MVP-centric opening performance at Minnesota (364 yards, four TDs) fuels hope that he’ll flow better in his second year in coach Matt LaFleur’s offense. Check back in a few weeks. After Sunday’s game against the Leos and Matthew Stafford, Rodgers has potential duels looming against Brees, Ryan, Brady and Deshaun Watson – all before Halloween.

Did you notice? Look who’s in first place in the NFC East. Take a bow, Ron Rivera. With the big comeback win against the Eagles, plus losses by the Cowboys and Giants, Washington sits alone at the top as it heads to the desert to face Arizona and Kyler Murray.