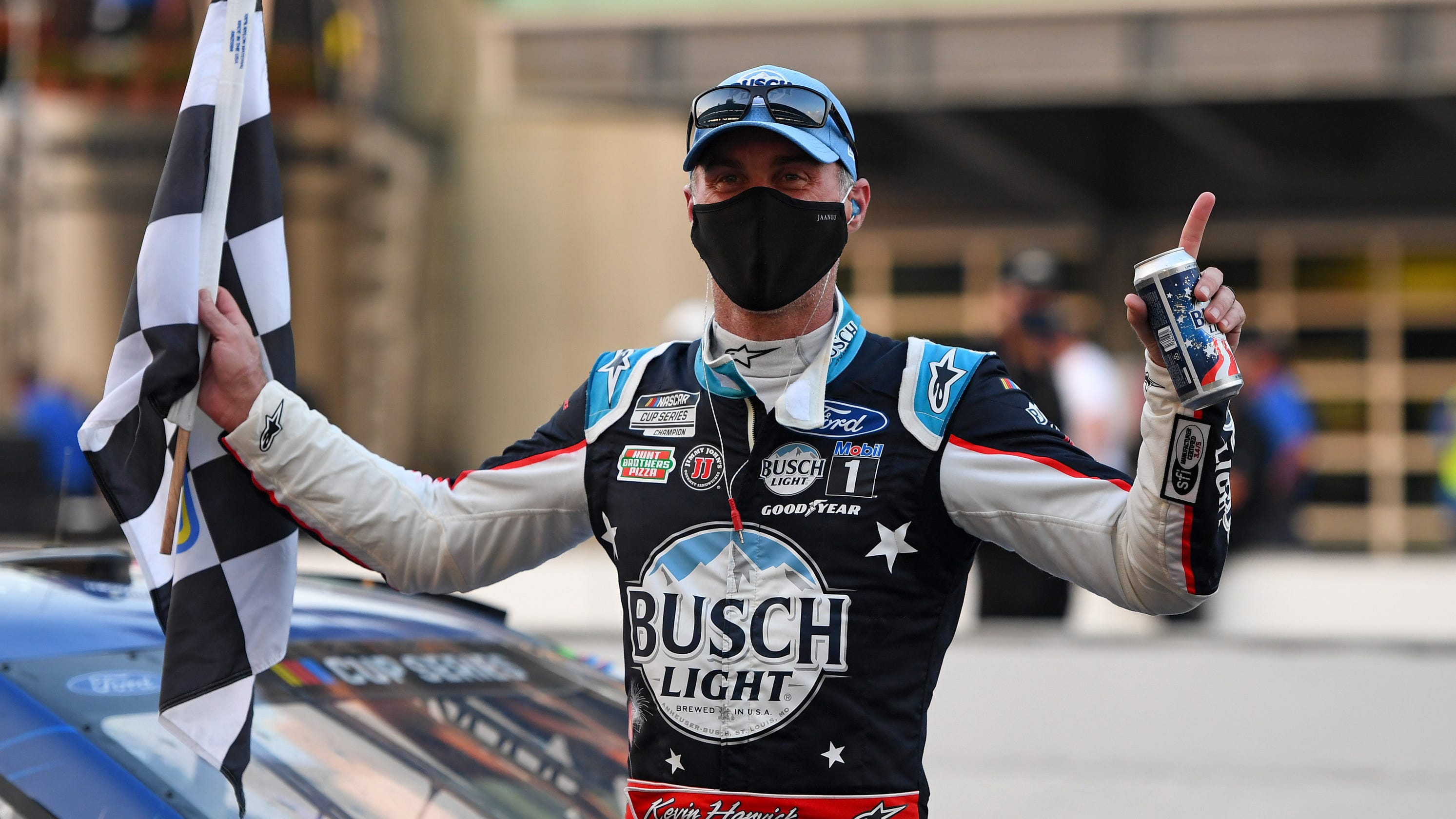 BRISTOL, Tenn. – Kevin Harvick steamrolled his way into the second round of the playoffs by holding off Kyle Busch on Saturday night at Bristol Motor Speedway for his series-best ninth victory of the season.

Harvick denied the reigning Cup Series champion his first win of the season when he took the lead a little more than 100 laps from the finish and held off every challenge from Busch the rest of the way. Busch furiously tried to catch him as the two weaved their way through lapped traffic, but Harvick held firm in the No. 4 Ford for Stewart-Haas Racing.

Only six cars finished on the lead lap in a tepid event at the 0.533-mile bullring revered for bumping and banging. Track officials sold all 30,000 tickets allowed – making Bristol one of the largest sporting events since the pandemic – and the spectators crowded the fence as Harvick celebrated his second win of the playoffs.

Harvick also won the Southern 500 at Darlington Raceway to open the playoffs.

“Bristol, baby!” Harvick shouted, arms raised to the crowd. “I was so jacked up when we started this race because of you guys. To beat Kyle Busch at Bristol … just kept fighting, we didn’t have anything to lose. Just trying to win a race.”

Busch, who failed inspection twice before the race and drove from the back of the field to lead in his Toyota, was disappointed to finish second.

“Just didn’t have enough there at the end,” Busch said.

It’s been a career year for Harvick, whose nine wins are the most in his 20 full-time seasons. Harvick previous best was eight victories in 2018.

“It’s just been a weird a year,” Harvick said, “but it’s been an unbelievable year on the racetrack.”

The first elimination race of the playoffs knocked William Byron, Cole Custer, Ryan Blaney and Matt DiBenedetto from title contention. All four were below the cutline at the start of the race and failed to produce a finish strong enough to get them into the next round.

DiBenedetto took a big swing with strategy during the first stage when he took just two tires on a pit stop. It cycled him into the lead briefly but 11 drivers on a full set of fresh tires passed him and DiBenedetto ended the stage 12th and ineligible for bonus points. He finished 19th.

Blaney, who was ranked as high as second in the standings earlier this season, simply had a third consecutive below-average race. He finished 13th.

Custer, the only rookie in the field, has been hampered by NASCAR’s protocols during the pandemic and hasn’t been able to practice or qualify the bulk of the season. He was 23rd.

Byron, who began the race three points behind the cutline with a shot at advancing into the second round, was the first driver officially eliminated when he ran into the back of Christopher Bell late in the second stage. Byron was running 10th at the time and alleged Bell had to slow to avoid Joey Gase, who had stopped in the middle of the straightaway.

William Byron has been eliminated from #NASCARPlayoffs Round of 12 contention. He’s out of the race. Listen in to the No. 24 team’s radio. pic.twitter.com/P0vKtIPBey

“I had literally nowhere to go. You can’t stop in the middle of the straightaway,” Byron said. “I’ve got to go back and watch that because that was kind of ridiculous.”

The second round of the playoffs begin next Sunday at Las Vegas Motor Speedway, the opener of the most challenging three-race series. The playoffs go from Las Vegas to Talladega Superspeedway and then end at Charlotte Motor Speedway on the combination road course and oval.