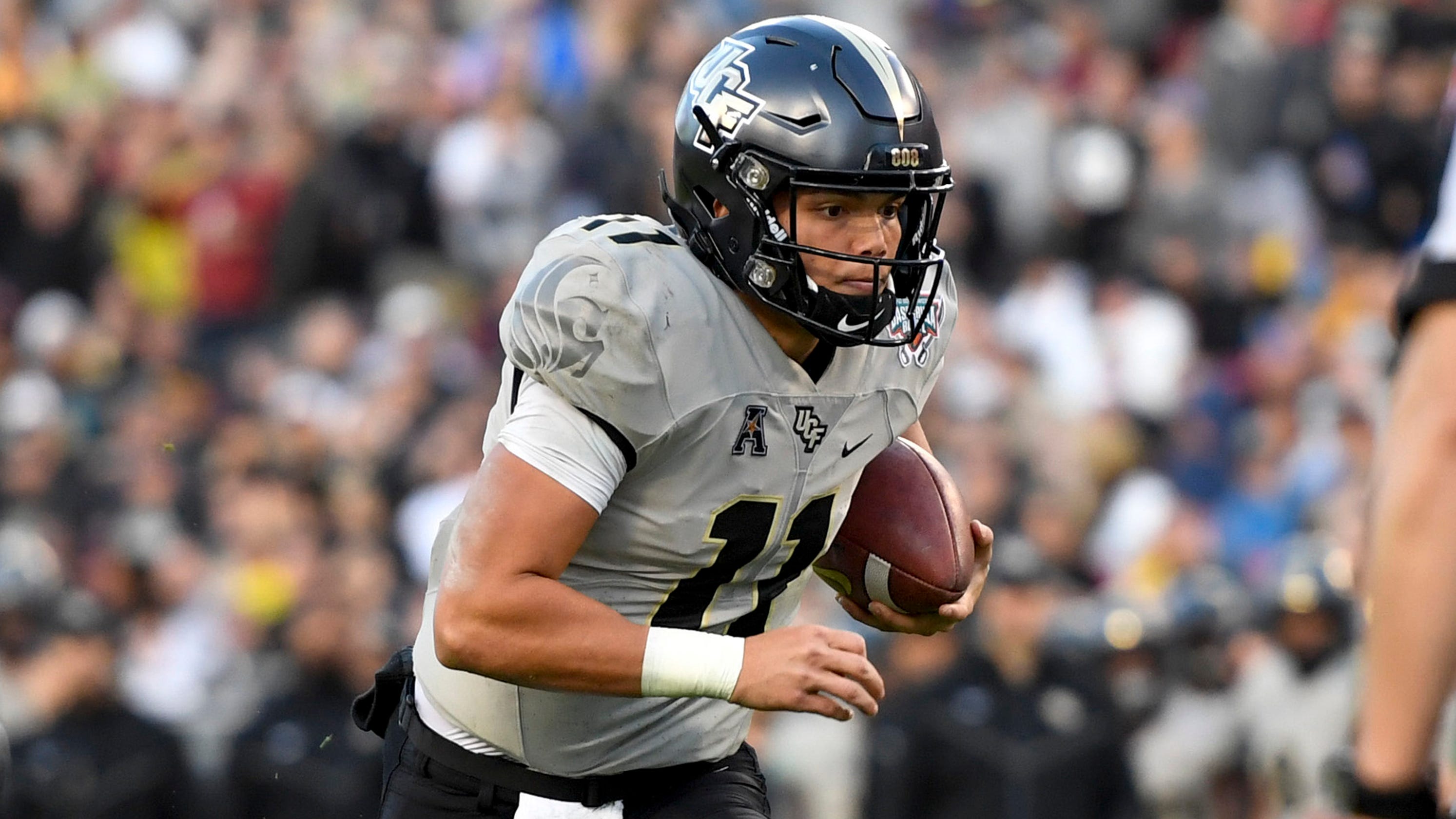 No. 13 Central Florida’s 49-21 win at Georgia Tech cements the Knights’ status as the team to beat in the Group of Five and maintains the program’s underdog hopes of crashing the College Football Playoff, which took a hit this week with the Big Ten’s decision to return to play in October.

First, the good news: UCF’s convincing win comes one week after Georgia Tech’s upset of Florida State put the Yellow Jackets right on the verge of the Amway Coaches Poll, as the first team outside of the Top 25.

While the Jackets are not viewed as a major ACC contender, meaning the win might look weaker in November than on Saturday, the Knights can lean on a 28-point road victory to rise in the polls while turning to games against American competition.

Sophomore quarterback Dillon Gabriel is quickly becoming a player to watch from a national perspective. After tossing 29 touchdowns and averaging 9.2 yards per attempt as a rookie, Gabriel began his second season with 417 yards passing and four scores against a Georgia Tech defense that held FSU to 4.4 yards per throw and had three sacks in the opener.

Will it be enough for UCF? The current playoff format doesn’t save room for the Group of Five, making it hard to envision a realistic scenario where the Knights finish in the top four — it’s possible, just not probable. But the only way the Knights could’ve even factored into that conversation was by cruising against Georgia Tech. Saturday was a definite success.

Clemson beat The Citadel, obviously. Don’t look so surprised. But no one was injured. Trevor Lawrence tossed three touchdowns and was pulled long before the end of the second quarter. Travis Etienne had a few touches, broke some tackles and then took the rest of the night off. Ahead 49-0 at halftime, the Tigers were able to play backups and newcomers extensive minutes as Dabo Swinney looks to build depth on the second tier for a team that looks set for a title run.

Notre Dame transfer Phil Jurkovec threw for 300 yards and two touchdowns as the Eagles beat Duke 26-6 in a very positive start for first-year coach Jeff Hafley. Whether Duke is any good is up for debate, though the Blue Devils were competitive with the Notre Dame in losing 27-13 last Saturday. This is the sort of opponent Boston College needs to beat to win more than four games during the regular season.

After that uneven performance against Duke, the Irish rolled to a 52-0 win against South Florida that saw a much stronger game from quarterback Ian Book, who ran for three touchdowns before backups entered with a few minutes left in the third quarter. While the shutout on defense and increased balance on offense comes against the Bulls, a program in a rebuild under new coach Jeff Scott, the Irish look prepared for an ACC slate that heats up in October.

One week after winning three games against Big 12 competition to be one of the big stories in college football, the Sun Belt’s reputation tumbled after No. 21 Louisiana-Lafayette needed overtime to beat Georgia State and No. 23 Appalachian State lost 17-7 at Marshall. While the Thundering Herd should be a top-three team in Conference USA, the loss does significant damage to Appalachian State’s quest to reach a New Year’s Six bowl.

The No. 12 Cowboys’ 16-7 win against Tulsa was a sluggish debut for a team with preseason hype as a dark-horse playoff contender. The lack of effectiveness and efficiency on offense can be attributed to an injury to quarterback Spencer Sanders and the below-average play of the offensive line, which gave up six sacks. Tulsa held star running back Chuba Hubbard to 93 yards on 27 carries, ending his run of 11 consecutive 100-yard games.

Now the Green Wave know how it feels. One week after reversing a 24-6 deficit to beat South Alabama 27-24, Tulane coughed up a 24-0 lead to Navy in losing by the same score. Obvious credit goes to Navy and coach Ken Niumatalolo for crawling out of a major hole after losing 55-3 to Brigham Young in the opener. Blown opportunities will haunt Tulane: Navy ran only two plays in Green Wave territory during the first half and Tulane tossed an interception near the goal line when looking to build on the 24-0 lead.

This hasn’t been good: Middle Tennessee has opened with losses to Army and Troy by a combined score of 89-14. Saturday’s 47-14 loss to the Trojans came as the Blue Raiders’ defense allowed 496 yards and 30 first downs while the offense committed another three turnovers, giving the team seven through two games.