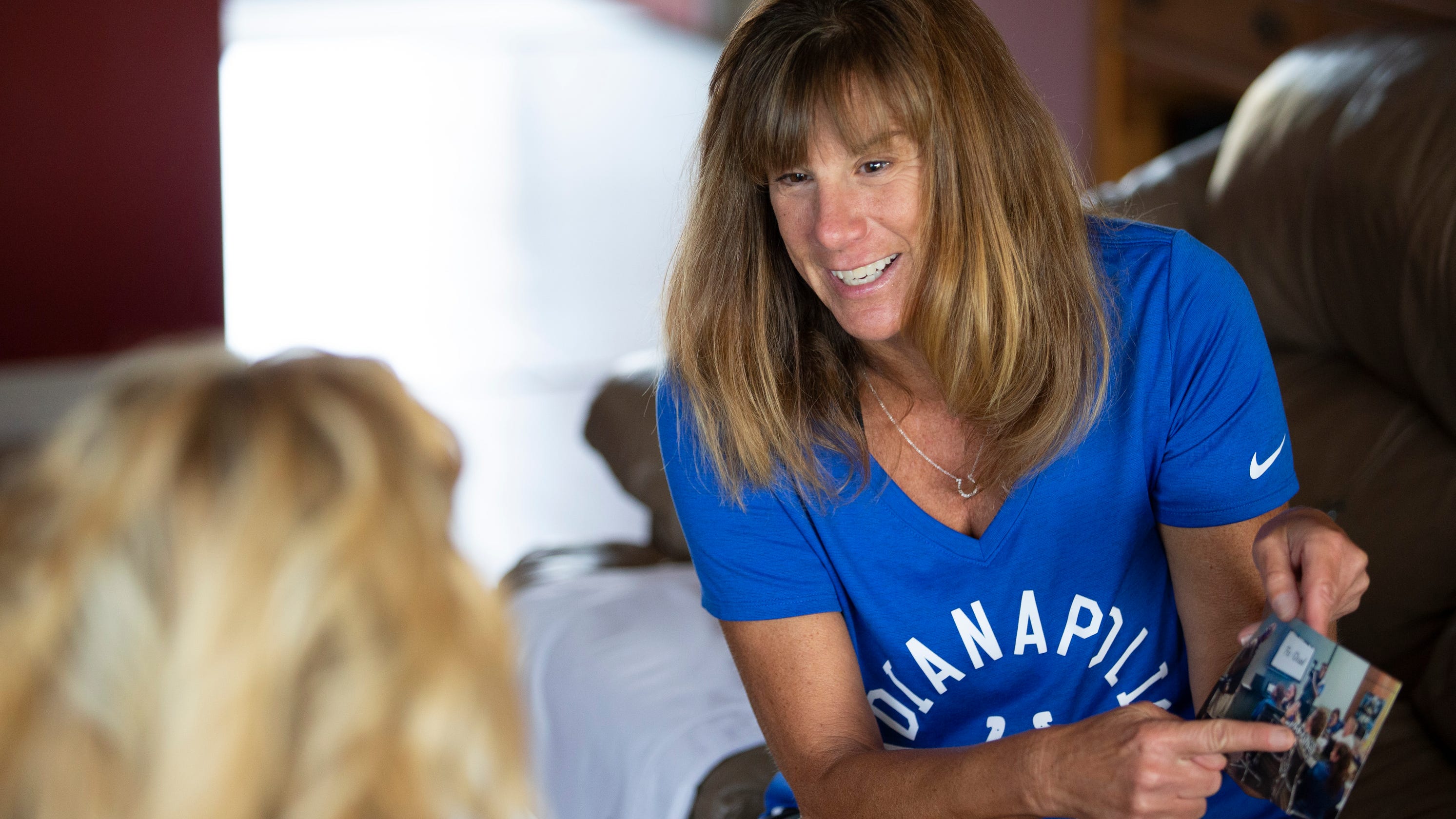 Fan has attended every home game, but her streak ends Sunday

INDIANAPOLIS — Of all those home Indianapolis Colts games, 300 and counting – Joanna Jockish has seen every one of them, rarely buying a thing from the concession stand so as not to miss a minute, usually sitting at the 50-yard line in section 513, always palms sweating and nerves jumbled — there was one that has no rival.

January 21, 2007. The Colts had trailed 21-6 at halftime, Tom Brady sauntering through the RCA Dome with his Hollywood smile. Peyton Manning grimacing with thoughts of the playoff choker jeers. One minute and seven seconds remaining in the fourth quarter. Colts, 38. Patriots, 34. Patriots have the ball.

Marlin Jackson with the interception.

His defensive play in that AFC championship game would send the Colts to the Super Bowl and they would win. He slid to the ground and raised his arm. Teammates overtook him.

Jockish remembers the dome was deafening. She had moved to seats closer to the field with her sister. The play happened right in front of her.

It was the culmination of a dedicated, diehard fan watching her team go from losing seasons and being a non-playoff contender to the epitome of NFL play.

It was a far cry from that 1984 season, that first game Jockish came to when she was 14 years old, not knowing she wouldn’t miss another for 36 years.

A brother’s love started it all

Jockish wasn’t chosen for the 2,500 fans to be at Sunday’s game against the Vikings. COVID-19 will snap her streak. It will be strange, she said, to watch from her Indianapolis home.

“It’s going to feel odd for sure to not be there in the stadium,” she said. It seems like her entire life she has been there — and she almost has.

Jockish was just a girl when her love of sports was born. Her older brother Chris, 14 years older, liked to take his little sister to high school games. By 10, Jockish and he were going to Indiana Pacers games. The second era of George McGinnis and Billy Knight. Jockish loved Jerry Sichting, who had played at Purdue.

Then football entered her life. Jockish was 14 years old when the Colts left Baltimore in the middle of the night to travel to their new home in Indianapolis. Chris got four season tickets with a friend. He chose to take his little sister every game.

They would park on Kentucky Avenue and Jockish has vivid memories of those 15-minute walks to the dome. The games where it was freezing with ice. Or raining. Or those perfect, sunny days when the Colts blue seemed to shine brighter.

There weren’t a lot of Colts fans in the city, yet.

“We were a basketball town until the Colts arrived,” she said, “and then it took a few years for people to come around.”

At school, kids would joke with Jockish about her love of the Colts.

“That’s the thing, I got teased all the time for being a Colts fan because the team wasn’t very good,” she said. Indianapolis didn’t have the tradition of the Chicago Bears or Detroit Lions.

Still she stood strong with a love of Jim Harbaugh, Bill Brooks and Chris Hinton. She started wearing Colts gear to school.

“Why are you cheering for the (Colts)?” they would ask her. She would answer: “It’s really important to me to support the home team.”

When the Colts schedule comes out, Jockish writes each game down on her calendar. There is no question about what she’ll be doing that day. No family gathering nor other social event that will take her away.

Her tradition for most games is to go to 10:30 a.m. mass at St. Roch Catholic Church where, coincidentally, priest Douglas Hunter happens to also be the Colts’ chaplain.

On Sundays, after communion and prayers, Jockish has been known to talk to Father Hunter about her Colts. Which ones are the good guys? Which ones go to church?

After mass in her Colts gear, Jockish heads to her brother’s flower shop. Jockish Flowers, in the Garfield Park area, has been in her family for decades. First owned by her dad, Chris now owns the shop.

Joanna Jockish holds up an Andrew Luck jersey in her home in Indianapolis on Wednesday, Sept. 16, 2020. Jockish has been to every Colts home game since their first season in Indianapolis, but will not be in attendance at Sunday’s game because she was not selected due to COVID-19 restrictions. (Photo: Colin Boyle/IndyStar)

When she arrives, if Chris is ready to leave, they two head to the game together. If he still has flower arrangements to tend to, Jockish leaves him behind. Until last year, Chris hadn’t missed a home game either.

She hates being late. She hates missing kickoff.

Jockish parks on Meridian Street just south of Shapiro’s Delicatessen. It’s a 15-minute walk to the stadium, 12 minutes if she needs to hustle.

“There’s nothing like game day,” she said. “I still feel the excitement every time I walk into the stadium.”

She loves to try to predict what the score might be, how the team is going to play. She loves being part of that massive crowd.

“I just enjoy watching the game,” she said. “I know more people do it for the social aspect, but I’m focused on every play.”

The good and the sad

She was there for both Super Bowl appearances. And Jockish has traveled to away games in New York, Jacksonville, Tampa and Denver.

But her true love is watching the Colts play in their own house and the electricity they generate.

There was the first time she felt that overwhelming energy from ecstatic fans. It was early — the game on Halloween night in 1988 against Denver.

John Elway and Denver was visiting the dome; Elway who had refused to play for the Colts when he was the No. 1 pick out of Stanford in 1983 by Robert Irsay in Baltimore.

Sure, maybe the Colts had a new city, but Indianapolis fans were ready to root — intensely — against the Broncos quarterback. It was the Monday Night Football matchup and millions of people were watching Indianapolis on the national football stage for the first time.

“That was pretty loud and crazy,” she said. “It all just felt so close, like you were right there on the field.”

Another memorable game for Jockish was the 2013 return of Peyton Manning, by then a Denver quarterback, to take on his former team in Lucas Oil.

For 90 seconds just before kickoff of the Sunday night game, the roar of the crowd was thunderous. Manning removed his helmet, raised his right hand to wave and turned to each corner of the stadium to acknowledge the fans.

The Colts won the game 39-33. And as much love as Jockish had felt for Manning through the years, she was glad.

“Oh, I cheered for the Colts for sure,” she said. “That was hurtful, really, when he went to Denver. I didn’t want to see him play for another team. So, it was hard for me. Then I had to remember everything Peyton did for us. I didn’t boo him or anything.”

Jockish never boos. She only cheers. And that brings her to one of the worst memories she’s had at a Colts game.

She was at the preseason game August 2019 when word leaked that Andrew Luck was retiring. She didn’t hear the boos that came from the crowd. She knew nothing of his retirement until she was leaving the stadium and started getting text messages.

She got in her car and listened to his press conference on the radio.

“You could just feel his pain,” she said. “He loved the game of football but he was in so much pain.”

Jockish hated that it was reported fans were booing him. It was a small portion that did, very small. The majority of Colts fans respected his decision to leave the game.

‘I cannot wait to get back’

Through the years, her proximity — being in the stadium — and sometimes pure happenstance have put Jockish face to face with Colts players.

She’s met Ken Dilger, Robert Mathis, Pat McAfee, Andrew Luck, Dwayne Allen, Griff Whalen and so many more. She credits many of those meetings to being a member of the Colts Blue Ladies Club.

It’s tough for Jockish to pick a favorite Colts player. “How in the heck do you pick just one?” she said, especially with all those greats on the roster through the 2000s. On the current roster her favorites are Quenton Nelson, Jack Doyle and Darius Leonard.

When it comes to coaches, though, that’s easy for Jockish. Tony Dungy is her favorite, hands down.

Pat McAfee was charming and the ladies were swooning, Joanna Jockish said of the time she met the Colts punter. (Photo: Joanna Jockish)

“His character, I just love his character and his Christian values,” she said.

Jockish has read all of Dungy’s books. She once went to a book signing to meet him. Then there was the day she was walking through The Fashion Mall at Keystone at the Crossing and so was Dungy. She said, “Hi,” and asked how he was doing. He smiled and said hello back.

After a Pacers playoff game one night, Jockish was walking down an alley to her parked car. She spotted Luck with his then-girlfriend heading for their bikes. She stopped to  tell him how much she enjoyed watching him play. Luck thanked her and said, “How about that Pacer game?”

The two talked Pacers and then Luck got on his bike and rode away.

“I was so impressed about how nice he was and how gracious ,” she said. “A really nice guy.”

Joanna Jockish holds up Indianapolis Colts memorabilia in her home in Indianapolis on Wednesday, Sept. 16, 2020. Jockish has been to every Colts home game since their first season in Indianapolis, but will not be in attendance at Sunday’s game because she was not selected due to COVID-19 restrictions. (Photo: Colin Boyle/IndyStar)

She has used Colts players like Luck and Nelson in her teaching lessons over the years at Sycamore School. She showed her third graders what it meant to have good sportsmanship on the field. On Fridays, she would have blue Friday math.

After winning a contest with the Blue Ladies Club in 2017, Jockish got to choose a place to have Colts mascot Blue visit. She chose her classroom. The kids loved it.

But, perhaps, not as much as Jockish.

And so on Sunday as her beloved Colts take the field inside a near-empty stadium, Jockish will take a seat on her couch.

She will watch the game by herself. She knows her palms will still sweat and her nerves will be jumbled. She will get up and pace and she will still yell for her team.

But the electricity of being among that massive crowd will be missing. And the end of an era will come that started with a little girl’s love of sports.