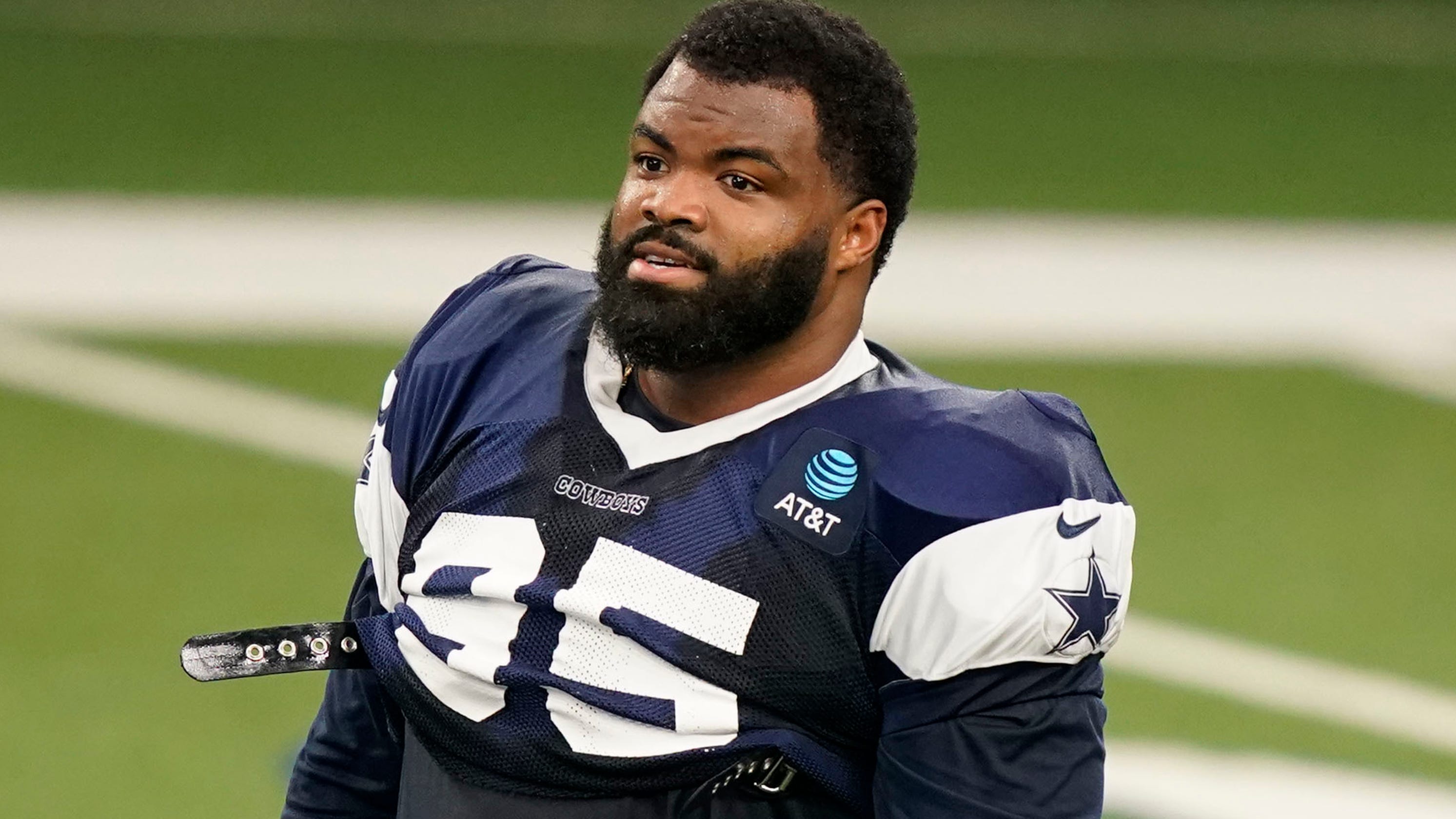 Give Dontari Poe credit. And grace.

Last weekend, the burly defensive tackle became the first player in the 60-year history of the Dallas Cowboys to take a knee during the national anthem as a silent protest to social inequality.

He still has a job.

It took some guts for Poe to make that specific statement, given that no Cowboys player had dared to do as much in these years since Colin Kaepernick introduced the NFL universe to anthem protests, and until lately, team owner Jerry Jones threatened job security with hard-line rhetoric.

Yet another litmus test looms. After taking a knee in a sparkling-yet-empty SoFi Stadium in Los Angeles, Poe’s next projected protest will come before real, not virtual, fans at Jerry World as the Cowboys put on their home opener Sunday against the Falcons.

Let’s see how the home crowd reacts. The Cowboys haven’t publicly revealed any specific attendance expectations, but with coach Mike McCarthy throwing out a 25% capacity tip this week, that sounds like maybe 20,000.

Will they embrace, jeer or even ignore Poe’s protest? Considering the booing in Kansas City before the NFL kickoff game, when Chiefs and Texans players locked arms in a show of unity, Poe should brace himself for low-blow reaction.

Take it from Mike Ditka. Even given heinous, caught-on-video events of recent months that involved the killing of George Floyd and the shooting of James Blake, there’s still a segment of this world that can’t fathom the NFL stage as an ideal place to make a social statement. Especially one where a Black man is sticking to his convictions to protest social inequities that include police brutality and systemic racism.

“I’d be shocked if there’s not any pushback,” renowned sociologist Harry Edwards told USA TODAY Sports, referring to protests during the anthem in general. “That’s part of the struggle. Anytime issues of Black people are at stake, athletes are of no consequence. When (athletes) become a spotlight for something other than what (fans) are comfortable with – entertainment, fantasy teams – they boo it.”

That Jones has softened his previous stance of staunch resistance to protests is one thing. In recent weeks, Jones has talked about the “grace” needed for fans to understand why some players are protesting. No, it’s not about the flag or dishonoring the military or the nation.

But some people still don’t get it. It was stunning to hear how fans down in Cowboys country booed MLS players from FC Dallas and Nashville who came together to kneel during the anthem before a mid-August game in Frisco, Texas, not far from the Cowboys’ headquarters.

“Absolutely disgusting,” is how Reggie Cannon, an FC Dallas player, assessed the booing.

Dallas FC owners, including Clark Hunt, owner of the Chiefs, issued a statement denouncing the fan reaction while also indicating that Cannon was subjected to “violent threats.”

What a shame. The episode also underscores why players kneel and why they must continue to kneel as a symbolic gesture that complements specific action items.

Never mind the Ditka mindset. This week, the Hall of Fame and Bears icon repeated his audacious and tired, white-privileged theme by suggesting to NFL players who protest during the anthem, “If you can’t respect this country, get the hell out of it.” If only Ditka could passionately demand that the country live up to its pledge about liberty and justice for all. The protests, like the Civil Rights marches a generation ago, have a purpose.

Last weekend, just two games were played before fans, with Kansas City listing 15,895 in paid attendance and Jacksonville tallying 14,100 for its game against Indianapolis. As teams gradually get fans back into stadiums amid increasing attention on social issues, it will be interesting to gauge the breadth, scope, impact and yes, reaction of a protest movement in the NFL that coincides with action beyond the field.

Some teams, including Miami, Green Bay and Jacksonville, have decided not to show up for the anthem at all, staying back in the locker room rather than fueling additional layers of messaging. It’s a sign of the times, NFL 2020.

It’s good that Roger Goodell isn’t taking his cues from Ditka. The NFL, flowing with a broader national sentiment in recent months, is demonstrating some of the support for its players that it should have years ago when Kaepernick ignited an awareness switch in 2016.

No doubt, with Kaepernick and now safety Eric Reid, also an active protester, out of the league, the NFL’s efforts still come with an asterisk. Hearing Goodell maintain “we should have listened” in explaining why the NFL didn’t better support players a few years ago comes off as some serious spin.

Still, more of Goodell’s bosses (NFL owners) have evolved to some degree. Colts owner Jim Irsay, for example, has gone from publicly denouncing anthem protests to using his popular platform on Twitter to set the record straight for some who need to hear it.

“Of COURSE all lives matter, but the phrase ‘BLACK LIVES MATTER’ is about unequal treatment faced by BLACK Americans,” Irsay tweeted recently. “It does not say or imply that ONLY black lives matter. E.g., when we say ‘BEAT BREAST CANCER’ it doesn’t mean we don’t care about beating leukemia.”

Irsay’s coach, Frank Reich, by the way, took a knee during the national anthem before the opener at Jacksonville last Sunday.

Meanwhile, NFL players are now allowed to place decals on the back of their helmets to honor victims of racially charged and/or police violence. And the league is decorating fields with messages stenciled into the end zone, including, “End Racism” and “It Takes All Of Us.”

“The branding of the movement, Black Lives Matter, and the way the NFL’s support has evolved, has humanized the players more,” C. Keith Harrison, a University of Central Florida professor who heads the Paul Robeson Research Center, told USA TODAY Sports. “But there are still going to be haters out there who are not going to be on the same page.”

Ask Cardinals safety Budda Baker. He received and exposed messages from a so-called fan after comments that were so hateful and racist that the 49ers put out a statement condemning the fan. Baker was apparently targeted because his hard-but-legal tackle last weekend resulted in a knee injury to 49ers star tight end George Kittle. Yet somebody wanted to play the race card.

Yes, in this world, unfortunately there are many reasons for players to kneel. Especially when they have our attention. Whether you like it or not.