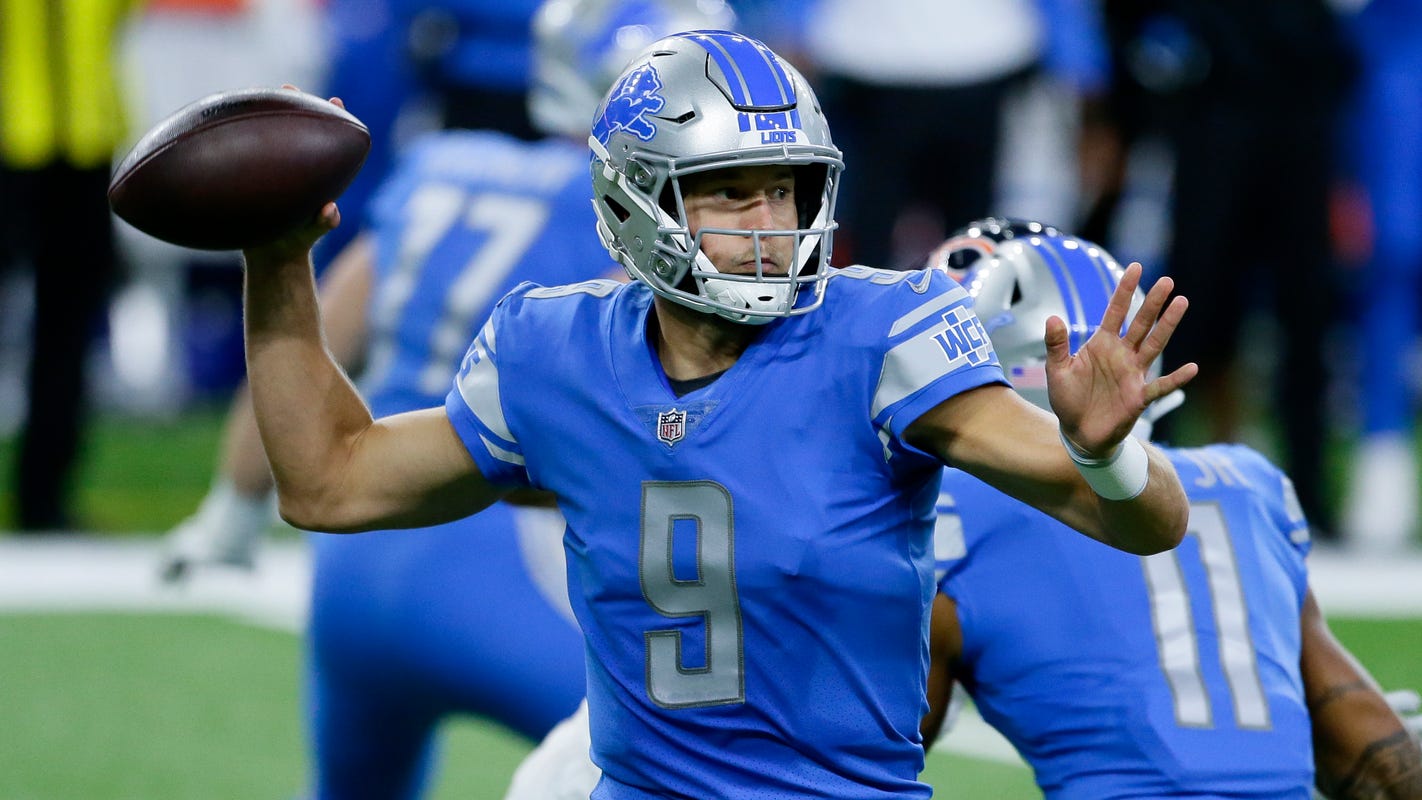 Matthew Stafford penned a powerful essay for The Players’ Tribune website Friday in which he detailed racist behavior that he experienced while with some of his teammates this spring and urged everyone to continue fighting against racial injustice.

The quarterback said his proudest day as a Detroit Lion came in August when the team called off practice to demonstrate against the Jacob Blake shooting.

Blake was shot at least seven times by Kenosha, Wisconsin, police, and the Lions’ protest sparked other demonstrations across the sports world, with some games in the NBA, NHL and Major League Baseball being canceled or postponed.

Lions quarterback Matthew Stafford throws against the Bears in the first half on Sunday, Sept. 13, 2020, at Ford Field. (Photo: Duane Burleson, AP)

“We can’t just stick to football,” Stafford wrote. “Not as a team. Not as an organization. And we shouldn’t as a country.”

Calling them “human problems” not political statements, Stafford detailed one incident he saw this spring while working out with teammates in Atlanta.

He wrote he secured a field to host passing drills and spent four days throwing there with wide receiver Danny Amendola.

“No problems at all. It was great,” Stafford wrote. “A week later, I went to do the same thing, at the same field, with four of my black teammates. We were just starting to dump all the footballs out on the field and some of the guys were still stretching when a gentleman came out and told us that we were trespassing — and to leave immediately.”

Stafford wrote the man pulled out his cell phone, called police and told them the group was being “uncooperative” and “not leaving the property.”

Detroit Lions players include quarterback Matthew Stafford, center, lock arms with each other as they watch a pregame presentation at the end zone before the season opener against the Chicago Bears. (Photo: Junfu Han, Detroit Free Press)

“We were there for maybe 10 minutes total. Nobody said a bad word to him,” Stafford wrote, adding, “Obviously, we got out of there immediately.”

“I was embarrassed to have put my teammates in that situation, especially when I was told that it was cool to use the field. Especially when I had been on the same field with Danny with no problems,” he wrote. “The only difference is what we all know in our hearts. Danny and I are white. We don’t get the cops called on us in those situations. We don’t immediately get called uncooperative. And if Danny and I somehow did get the cops called on us, we all know how that interaction would have gone.”

Stafford, in his 12th NFL season, has long been involved with community projects but has become more vocal about social issues in recent months.

He took part in an online voter education town hall session in July in which he championed the importance for equal educational opportunities for children. He and his wife, Kelly, made a sizable donation to a local food bank and area hospital workers at the outset of the coronavirus pandemic. Last month, the couple gave $350,000 as part of a $1.5 million donation to their alma mater, Georgia, to seed a program designed to “implement strategic initiatives in the areas of diversity, inclusion, equity and social justice” for the school’s athletes.

Lions players take a knee during the anthem before the first half at Ford Field. (Photo: Kirthmon F. Dozier, Detroit Free Press)

And before Sunday’s season opening loss to the Chicago Bears, Stafford was one of several Lions players who took a knee for the playing of the national anthem.

“I’ve known the guy for a year and a half and I’ve known him to be very honest and forthright, and when something’s important to him and he feels a certain way, he’ll express his opinions and he’ll do that,” Lions quarterbacks coach Sean Ryan said Friday. “I think when he sees something that’s wrong or something that he feels he can help make right, he’s going to do it. So I’ve seen that from the start.

“I think situations have changed in the last year and a half that have given him the ability (to say), ‘Hey, this is the time to voice my opinion.’ So I think things have changed for a lot of us in that way, but it does not surprise me at all that the guy’s out in front, that he’s leading and that he’s being genuine and letting his feelings be known that in trying to help things.”

In his essay, Stafford wrote that he was affected by a story Lions defensive end Trey Flowers told about how he deals with the anxiety of being pulled over by police.

If Flowers gets pulled over, Stafford wrote he rolls down his window, puts his hands on his steering wheel and asks the officer if he wants Flowers to step out of the car so he can be handcuffed.

“Just so he makes it back home,” Stafford wrote. “If you’re a white person, all I’m asking you to do is really think about that. Imagine that being your first instinct when you see police lights in your rearview mirror.”

Ultimately, Stafford wants everyone to do something the Lions have stressed since they began discussing racism, police brutality and social injustice as a team after George Floyd’s death this spring: Listen.

“Police brutality, white privilege, racism — it’s all real,” Stafford wrote. “It’s time we stop pretending, or defending, or just closing our eyes to what’s right in front of us. We have to listen, and we have to keep having these hard conversations.”