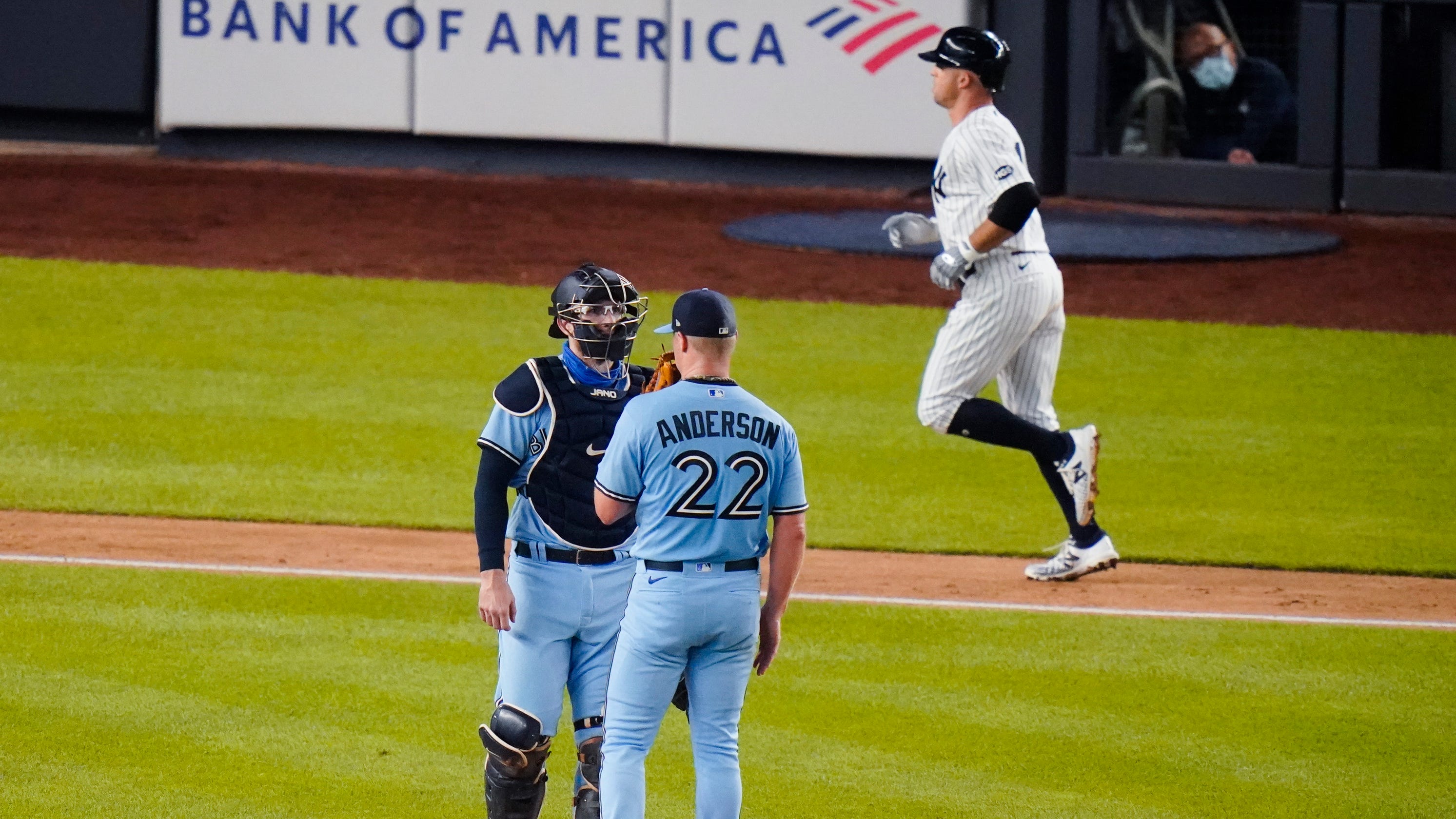 NEW YORK — For three-and-a-half innings on Thursday night, the Yankees appeared as though they might have to go through a genuine, grind-it-out game to finish their series with Toronto.

Then, the Bronx Bombers did their thing.

The Yankees’ five home runs in one inning set a franchise record and tied a Major League Baseball mark that had been accomplished only six times previously.

The lightning-round of dingers seemed a fitting way to complete a sweep in which New York clubbed 19 homers – the most by a team over any three-game span in MLB history – and ran its win streak to eight.

“That’s an impressive series right there,” Yankees manager Aaron Boone said. “But we’ve got to now move on from what was a really good home stand for us, obviously, and start an important [seven-game] trip and go do it now on the road.”

Perhaps the easiest thing to overlook in their 10-7 victory over Toronto was another steady performance from Masahiro Tanaka (3-2), who helped himself with some outstanding glove work. The Blue Jays made enough noise against New York’s bullpen in the ninth to necessitate a two-out save from Aroldis Chapman.

Consider, too, that the scoring in the seven-run Yankee fourth began when Gary Sanchez broke through with a double to score Clint Frazier.

Sanchez also went deep in the seventh to post his first multi-hit night of 2020 in his 42nd game of the year. The catcher’s two RBI gave him seven RBI in four games, as he continues to inch his way off the interstate (.145).

“He’s a different guy than he was 3-4 weeks ago,” Boone said of Sanchez. “Now, it’s just about starting to get results and really locking it in to being what we know he can be.”

Sanchez, speaking through interpreter Marlon Abreu, noted that “something is definitely changing in the right way for me.

“I’m getting much better results, and I’m very thankful for everybody here to give me the opportunity… to get myself out of a really bad funk,” he said.

Stanton finished a triple shy of the cycle, going 4-for-5 and driving in two in his second game back from the 10-day IL. He returned from an off-day Wednesday, given to try and ease his recovery from a left hamstring strain.

“My balance and timing were much better [Thursday],” said Stanton, adding that he didn’t even think about his hamstring while legging out a third-inning double. “I’ve just got to keep feeding off that.”

Meanwhile, Aaron Judge – who returned from a calf strain on Wednesday – was given a night off for the same reason. Boone anticipates having both in the lineup when they begin their weekend series against the Red Sox at Fenway Park.

“With all of us in there,” Stanton said, “it’s something special. It’s something fun to be a part of… and we’re coming together at the perfect time.

The Blue Jays should get one more opportunity to face Tanaka when the Yankees visit their temporary home park in Buffalo next week.

Thursday, the right-hander threw 91 pitches (four shy of his season high) and completed his longest outing of the year, seven innings. Three of the seven hits he allowed came off the bat of Lourdes Gurriel, Jr. (two solo homers, one double).

“I’m just kicking myself for those at-bats against Gurriel,” Tanaka said through interpreter Shingo Horie. “But other than that, I feel like I did a pretty good job. I had good command and good control.”

Tanaka struck out five and walked none, and he improved to 9-2 with two no-decisions in his last 13 starts against the Blue Jays.

If Yankee pitchers continue on their current rotation, he would start the season finale versus Miami, although Boone has hinted that he would like to have Tanaka and Gerrit Cole ready to open a potential playoff series.

“I’m assuming that we’ll talk about that [Friday], as far as when to pitch next and how they’re going to align us heading into the playoffs,” Tanaka said.