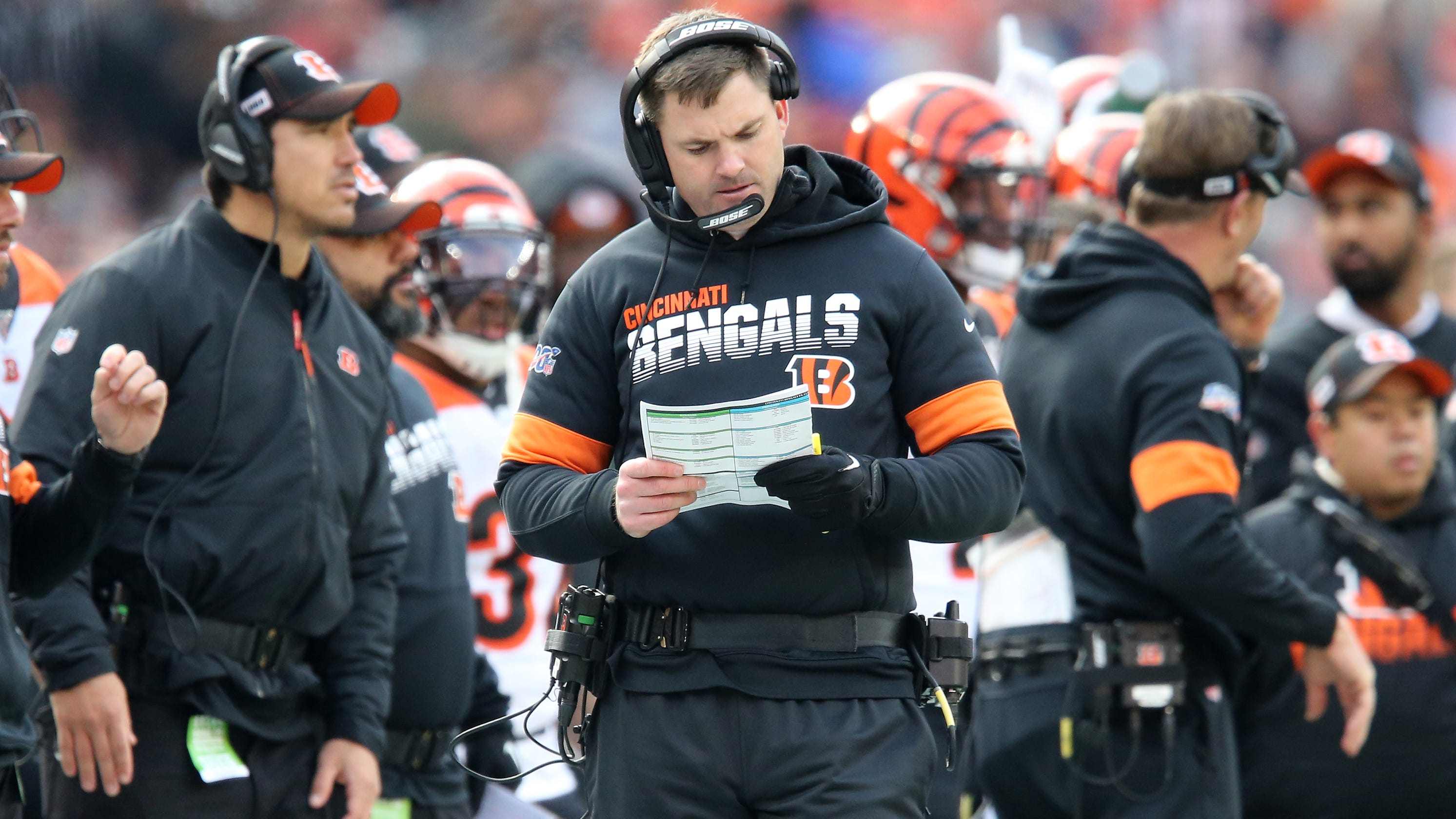 How Cincinnati Bengals coach learned to run an NFL offense

The Bengals rookie didn’t mince his words after the loss on Sunday.

Taylor hadn’t found his place in the Wake Forest University offense during his freshman year as a college quarterback. To become the starter, he needed to be better running the ball –– Wake’s quarterback Cory Randolph ran for 404 yards in 2003.

But that style of play didn’t fit Taylor’s skill set, so he transferred to Butler County for the 2004 season. This was before he became a star college player at Nebraska, before he became the Cincinnati Bengals head coach at 35-years-old and before he designed an offense for Joe Burrow.

If Taylor hadn’t picked Butler County and played for head coach Aaron Flores, he might have never gotten into coaching.

“He was really the first one that gave me the confidence that I needed,” Taylor said.

When Taylor arrived on campus in El Dorado, Kansas, Flores didn’t guarantee him the starting job. At Butler County, Taylor needed to beat out the other Division One transfer quarterback on the roster to play on Saturdays and get noticed by recruiters from power conference schools.

But it only took a few weeks for Taylor to become the starting quarterback.

“He wasn’t real loud, and he wasn’t a huge vocal leader, but he learned how to lead by example,” Flores told The Enquirer. “He just knew how to command the offense, and he learned that very quickly. That confidence built throughout the spring as he was here with us.”

Taylor was only 20 years old when he transferred to Butler County, and he hadn’t led a college team to a single win yet. Flores said Taylor’s passing accuracy and his ability to learn the playbook were already advanced, but he hadn’t learned yet how to apply those strengths on the field.

Flores pushed Taylor during the offseason. On the field, Flores handed Taylor the playbook and expected he’d learn the offense in a few weeks. Off the field, he included Taylor in recruiting visits –– the day Taylor stepped on campus, he convinced five high school players to commit to Butler County.

“He had been there about five hours and he was already poaching kids even though he didn’t even know a whole lot about us,” Flores said. “I could just tell from the first time you met him how he carried himself, he just had the it factor.”

Taylor thrived in Butler County’s pro-style offense, and Flores said he didn’t ask Taylor to run the ball. In this system, Taylor stayed in the pocket, and Flores believed Taylor would make the best read down the field.

When Taylor played against Coffeyville, Butler County’s biggest rival, Taylor led the team on a 90-yard touchdown drive to win the game in the last minute. “He just made play after play after play,” Flores said.

During the regular season, mid-major schools like Troy and Memphis started calling Flores to see if Taylor would be willing to transfer back to the Division One level. Later in the season, Taylor heard from Nebraska coach Jay Norvell, who told Taylor he could be the Cornhuskers’ starting quarterback.

Norvell was looking for a quarterback who could run an NFL-style offense, which Taylor had some experience with at Butler County.

Before he arrived at Nebraska, Norvell worked with Jon Gruden and the Oakland Raiders. Nebraska hired Norvell and head coach Bill Callahan to implement a West Coast offense at a time when colleges were mostly running spread systems. Norvell wanted a quarterback who could run the exact same offense as the Oakland Raiders.

“We basically took a pretty intricate pro system and brought it to college football,” Norvell told The Enquirer. “Teaching Zac this offense was one of the great joys of my career, and the things that we did to Zac were probably not really fair to a college quarterback, and he was able to handle it so marvelously.”

When Norvell met with Taylor early on, he put the quarterback through “grueling tests” to see how well he could grasp the offense. Nebraska ran some of the exact same plays that legendary NFL coach Bill Walsh created for Joe Montana and Jerry Rice, and Norvell didn’t hold anything back from Taylor.

Most college quarterbacks have every play listed on one wristband on their left hand. At Nebraska, Taylor had lists of plays attached to his left wrist, his right wrist and his belt buckle.

“Bill Callahan and Jay Norvell taught me timing, taught me the details of quarterback play,” Taylor said. “(They) really gave me my first look into what a pro system looks and feels like. It was unlike anything I’d ever been around. That’s probably what propelled me into coaching.”

Taylor said it was difficult learning Nebraska’s offense. As much as he tried studying the playbook during his accounting and economics classes, Taylor said he was as nervous for  Nebraska’s Spring Game as any football game he’s ever played.

“It was in front of 85,000 people,” Taylor said. “We dealt with more media than I’d ever dealt with in my life. It felt like a real game. I’d only been there for two months.”

Despite his nerves, Taylor threw for a Spring Game record 357 yards in the first half to lead his team to a 42-14 win.

Taylor continued exceeding expectations at Nebraska. In 2005, Taylor led Nebraska to an 8-4 record and an Alamo Bowl victory over Michigan. As a senior, Taylor had the Cornhuskers in the Big 12 Championship Game and the Cotton Bowl.

When his playing career ended, Taylor said he knew he wanted to be a football coach.

“(Callahan and Norvell) taught me so much, it was like, ‘This was a waste if I don’t use it at this point,” Taylor said.

At Nebraska, Taylor learned how to run an NFL offense from Norvell and Callahan, who had coached players like Peyton Manning and two-time All-Pro Rich Gannon. And now with the Cincinnati Bengals, Taylor can do the same for Burrow.

“Obviously the stakes are high for both of them,” Norvell said “(Taylor) is the kind of person who has the intelligence to adjust and help a guy like (Burrow) be his very best.”