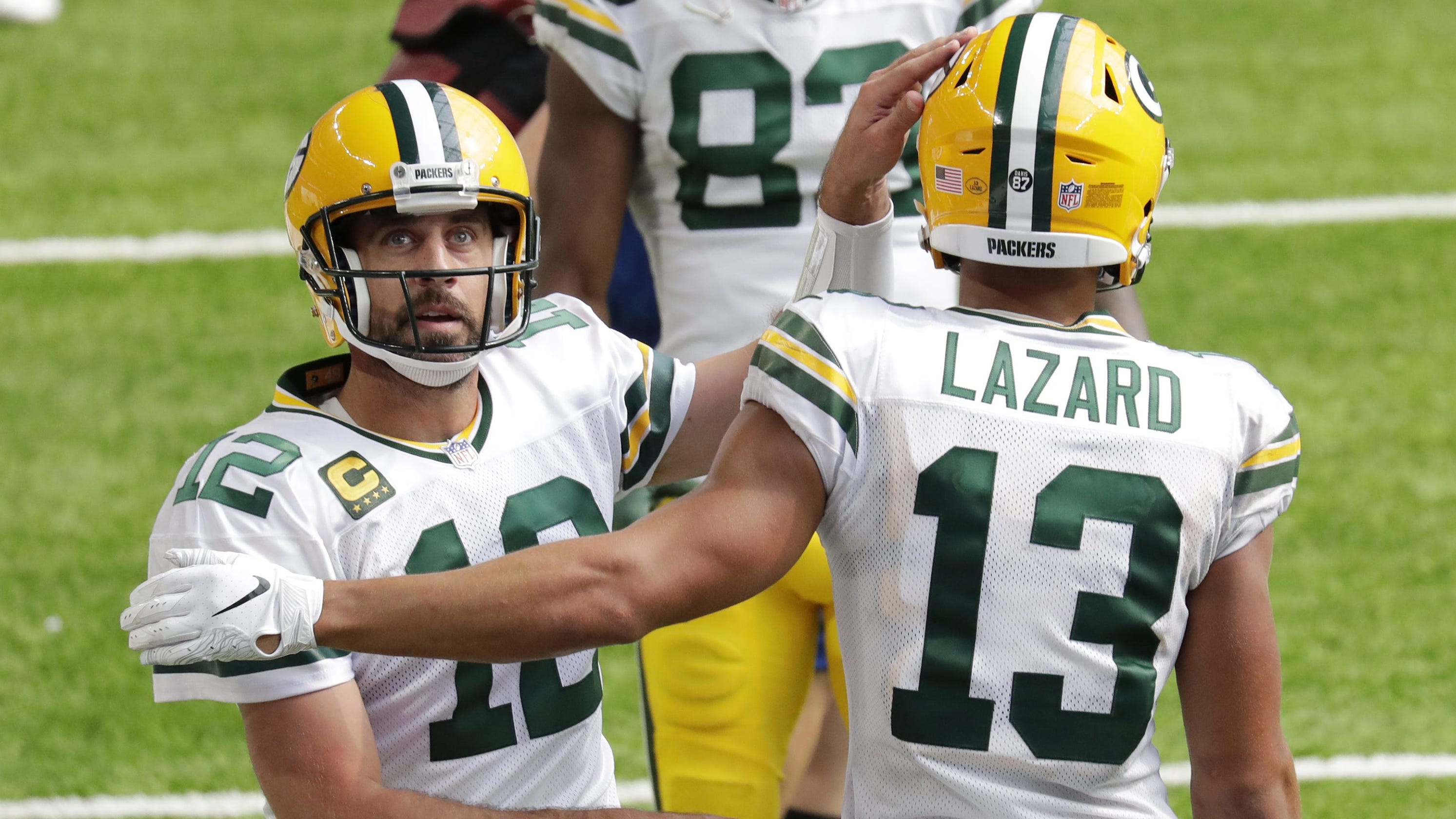 GREEN BAY, Wis. – After the Green Bay Packers threw a dizzying array of offensive motion Sunday at the Minnesota Vikings, one might think the guy who had the most influence on coach Matt LaFleur was Isaac Newton.

Now in the second year of implementing his perimeter-attacking offense, LaFleur is opening up his playbook and pulling things out that Sean McVay’s Los Angeles Rams used to reach the Super Bowl two years ago and Kyle Shanahan’s San Francisco 49ers used to get there last year.

They all believe in the science of motion.

The Packers probably looked like a blur to the young Vikings cornerbacks and defensive linemen because they used so much motion during their 43-34 opening-weekend victory at U.S. Bank Stadium. And Green Bay’s Week 2 opponent, the Detroit Lions, can expect the same Sunday.

“I can tell you, the motions aren’t going anywhere,” quarterback Aaron Rodgers said. “Those are going to stay.”

Probably the most identifiable motions were the jet sweeps run mostly by receiver/running back Tyler Ervin, who chipped in 38 yards total on the three times Rodgers handed him the ball off that motion. In all, Ervin was sent in motion either in front or behind Rodgers eight times against the Vikings.

But that doesn’t account for even a quarter of the 42 instances a player went in motion, sometimes moving twice before the ball was snapped. The Packers used motion on 32 of their 74 plays from scrimmage that were not kneel-downs and practically every player on offense was on the move at one time or another.

The jet sweeps can be as much for distraction as anything, but Rodgers said there really isn’t a motion that doesn’t have a purpose, whether it’s to help reveal what coverage the opponent is playing, create a one-on-one matchup or disguise a play that was run earlier out of a different formation.

“For us, it is a part of our offense,” Rodgers said. “Every play has the possibility, I think, of having motion in it. There isn’t any motion that’s just a motion. Everything has a purpose. It’s all about the pre-snap, the eye discipline and fits and the defensive recognition.

“It’s a lot of learning every week, though, for sure, for all of us.”

Motion was at a minimum in coach Mike McCarthy’s offense and LaFleur didn’t use it as extensively last year because everything was new for the players. It requires the players not only remembering which assignments include motion, but making sure they’re timely with their movements so the play clock doesn’t run out.

Rodgers relays the motion LaFleur wants through calls in the huddle and it can require a lot of verbiage to get it communicated. He has resorted to a cheat sheet to help him get everything right.

“It’s hard for me sometimes to remember all the motions,” Rodgers said. “That’s why I’ve got that trusty wristband. Our calls get a little bit wordy at times.”

Some of the criticism McCarthy received regarding his lack of offensive creativity came from not using a lot of motion. It wasn’t just McCarthy who didn’t feel it was necessary for his offense to work.

Rodgers wasn’t a big fan of motion, either.

“For a long time, I didn’t want any motions and Mike didn’t like a lot of motion, either,” Rodgers said. “We just kind of lined up and went, and then as defenses kind of changed tactics, you saw more condensed formations taking off, you saw this offense in other places doing stuff with condensed formations and bunches and fly sweeps and fly motions.

“I think we’ve seen more teams across the league do it.”

The motion can create big advantages for the receivers because it can dictate how they will be covered or whether they can win the route that is called in the huddle. It also forces the defense to think on its feet and it appeared to slow down the Vikings for that very reason.

The downside is that all the motioning can burn a lot of time off the play clock. The Packers burned all three of their second-half timeouts with more than 10 minutes to go in the game and two of the timeouts came on the same series.

“It helps a lot for us, gives us certain tells in coverage and obviously just messing with the play clock a little bit, that also ties into our cadence as well,” receiver Davante Adams said. “I think it’s a tool that we use and we use it really well, so until it’s an actual problem, I don’t have a problem with it.”

Because the only rookies playing on offense are H-back Josiah Deguara and running back AJ Dillon, LaFleur doesn’t have to worry much about players blowing their assignments. Deguara, who played 24 snaps and moved around from tight end to fullback to receiver, has a high football IQ and was able to handle the workload.

Some veteran defenses probably won’t be as affected as the Vikings were, but it’s in LaFleur’s DNA to keep finding ways to create advantages with motion.

“That’s what this offense has done and we saw it when Kyle’s running it in Atlanta and Sean in L.A. This was a better version of some of the things we did last year, on Sunday.”