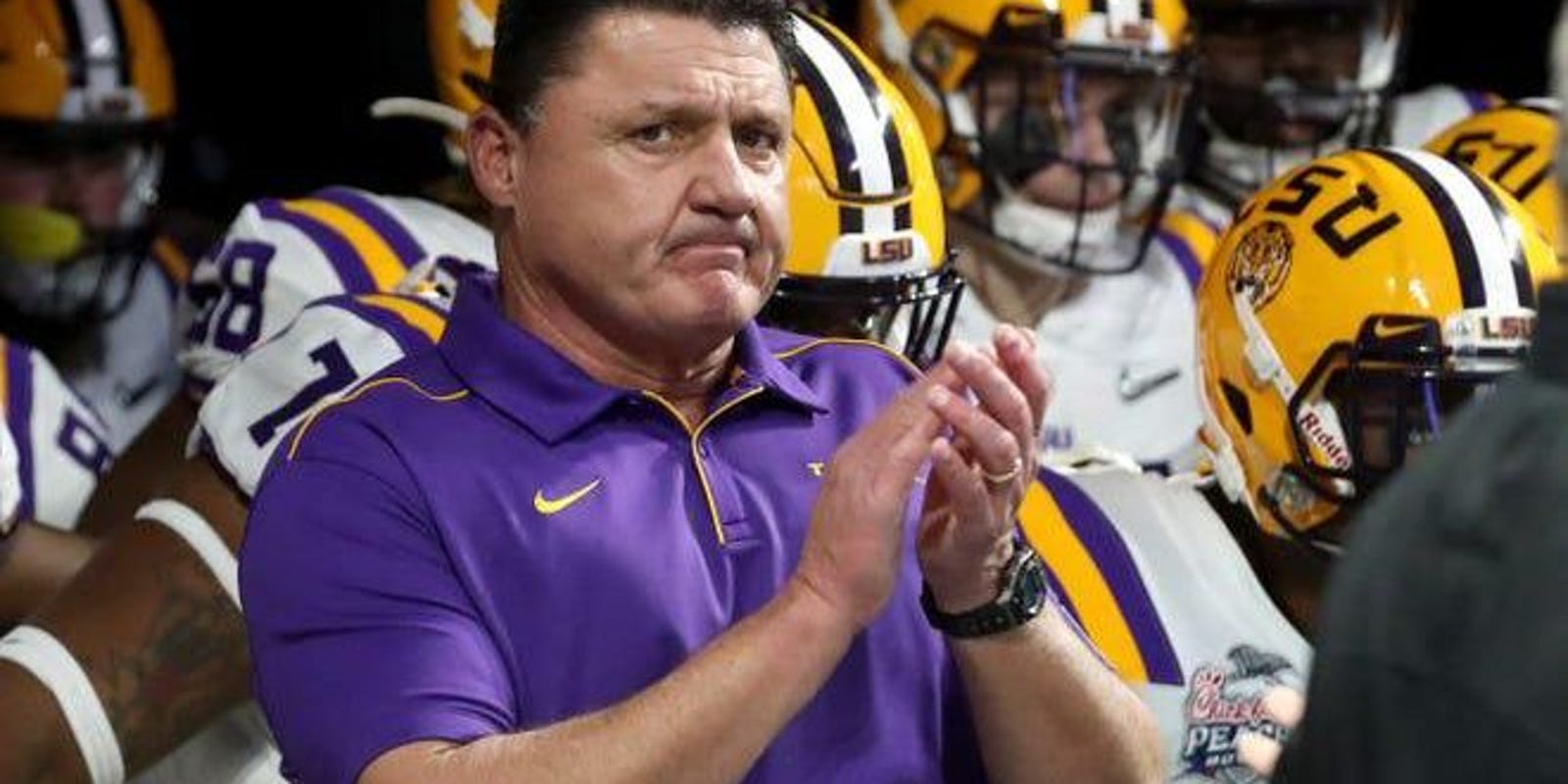 BATON ROUGE, La. — Several years ago, a high-ranking LSU athletic department official, who is still there, told me this:

“You can get in trouble around here for telling the truth.”

Joe Alleva was the athletics director at the time. He came from Duke, a private school, and had trouble adjusting to a freer flow of information, particularly public records requests, at LSU, a public state college.

When Scott Woodward replaced Alleva just more than a year ago, the thought was that LSU would be more open and thus be perceived better, as in the days of athletic director Skip Bertman, who preceded Alleva and had a much more open view of information.

Bertman is very confident and extremely intelligent with nothing to hide. So is Woodward, who was athletics director at Washington, then at Texas A&M, before coming to LSU, where he worked in the chancellor’s office as LSU’s director of external affairs.

Before that, Woodward was in government and public relations. As an LSU student and then a fresh graduate, he worked for Baton Rouge Mayor Pat Screen in the early 1980s with James Carville.

Woodward talks a good game. Last year, reporters were told he would have frequent, casual meetings with reporters for background information. There was one.

He did say a few times that he didn’t like doing a lot of interviews, and he has done only a few, which is fine. If you have a questions for him, you go through one of his assistants, and usually you get it, which is, again, fine.

But what is surprising, knowing Woodward’s intelligence, experience and background is why he has been so intent on keeping the number of COVID-19 cases on the LSU football team a secret.

Meanwhile, the university office has routinely publishing all of its COVID-19 campus positive tests multiple times a week. There are no names reported, just the numbers. We are not asking for the names of football players who have tested positive, just the numbers. Most schools are not doing this, but I expect more from LSU and from Woodward.

Had Woodward allowed the football team’s positive COVID-19 numbers to be reported, his athletic department, his football program and Woodward himself would not look so foolish and without credibility today. This covert operation is an embarrassment to the great journalism school at LSU and its many graduates at the top of their field.

LSU head football coach Ed Orgeron said Tuesday, “Most — but not all of our players — most have caught” COVID-19. (Photo: Jason Getz/USA TODAY Sports)

On Tuesday, LSU football coach Ed Orgeron revealed casually, and probably innocently, that “most of our players have caught it.”

Maybe Orgeron should teach a journalism class on honesty in reporting.

That revelation came after a summer of hearing from Woodward and others at LSU about how great LSU’s pandemic preventative measures have been after an initial spike in June in which 30 or more football players were quarantined. This was after many went to the bars near campus in the Tigerland area upon returning to campus. Since then, we have been told that players were off limits to such night life for their own COVID-19 safety and, very importantly, that of others.

Then on Tuesday, “most” of the team?

“I think the vast majority of them have happened socially,” Woodward said Wednesday in a teleconference that was scheduled before Orgeron’s comments to discuss the upcoming football season. “I don’t think they received it at practice or in the weight room. I think the protocols are good.”

Well, what about the bar bans and curfews?

Scott Woodward answers questions after being introduced as the new Director of Athletics at LSU, Tuesday April 23, 2019, in Baton Rouge, La. Woodward, who graduated from LSU in 1985, was the Vice-Chancellor of External Affairs at his alma mater under former Chancellor Mark Emmert from 2000-2004. Woodward spent time at Washington and Texas A&M before accepting the job at LSU as a replacement for Joe Alleva. (Bill Feig/The Advocate via AP) (Photo: The Associated Press)

During Alabama week, Orgeron will have them virtually 24-7. And this pandemic is still Alabama week every week for everybody. What happened?

To opt out or in? Ball is in Tyler Shelvin’s court

The testing protocol is great, obviously. They got most of the team. But what about before and after? Everybody has been guzzling the Kool-Aid at LSU since the 15-0 national championship last season, and understandably so, but are they doing it out of the same glass?

Are the coaches, other staff and athletic department personnel being as careful as the players? How sick were the players? It’s great if they weren’t that sick, but how many others have gotten the virus from them?

I believe the oversight part. What an oversight it was for “most” of the team to catch it despite LSU’s state-of-the-art quarantines and protocols that were advertised as the greatest this side of NASA. Still advertised as such, in fact.

“Dr. Katie O’Neal of Our Lady of the Lake (hospital) and Shelly Mullenix (LSU associate athletic trainer) have just been phenomenal on this COVID-19 protocol and how we’re doing it and advising,” Woodward gushed on despite the major spike. “They have been leaders in advising the Southeastern Conference. Greg Sankey (SEC commissioner) has leaned on Katie a lot to advise him on how we should look at things.”

Uh, maybe not so much after Tuesday’s revelation. And if they were doing so great, why so secret?

“And I’ll argue and I’ll contend with anyone that we have the best contact tracing system in America, maybe second only to the Secret Service,” Woodward said.

Yeah, maybe you’re an expert on tracing it because you’ve had so many get it. How about trying harder to make sure fewer get it?

Disinfecting Tiger Stadium: LSU will be clean for opener

And what’s this preoccupation with secrecy? Is it a power thing? Do you do it because it’s necessary, which it isn’t? Or because you can?

LSU would have served itself well by being more open over the summer. Now, it looks like it was ashamed of its pandemic protocol, or else why keep everything so secret?

In Woodward’s mind, if Orgeron would have just not said anything, everything would be fine – at least in his world of covert COVID-19.

Amazingly, Woodward, who talks a good game, quoted Winston Churchill, prime minister of the United Kingdom from 1940-45 during World War II, in his opening remarks Wednesday.

“Hopefully, this is the end of the beginning,” he said in reference to the pandemic. Churchill had said that in reference to World War II. Then Woodward went on to sound a bit more like a director of internal covert operations.

Wow, hope Woodward does not have the same philosophy toward an NCAA investigation of LSU basketball coach Will Wade.

Funny, Churchill has been praised by historians exactly for his transparency and forthrightness concerning the perils of World War II and what Britain was up against. Woodward just wishes Orgeron wouldn’t have said anything so everyone would think, “All is well. When’s kickoff?”

So, wonder if Orgeron will get in trouble for telling the truth? Is Lying State University back?

At least Woodward was forthright, transparent, and honest about his dishonesty in hiding the number of LSU football players who have tested positive for COVID-19.

It would have been better, though, for Woodward and LSU to have been open about the numbers of football players catching it over the last few months.

Then Woodward could have paraphrased Churchill saying, “Our football players and staff have nothing to offer but their blood, toil, tears, sweat and test results.”