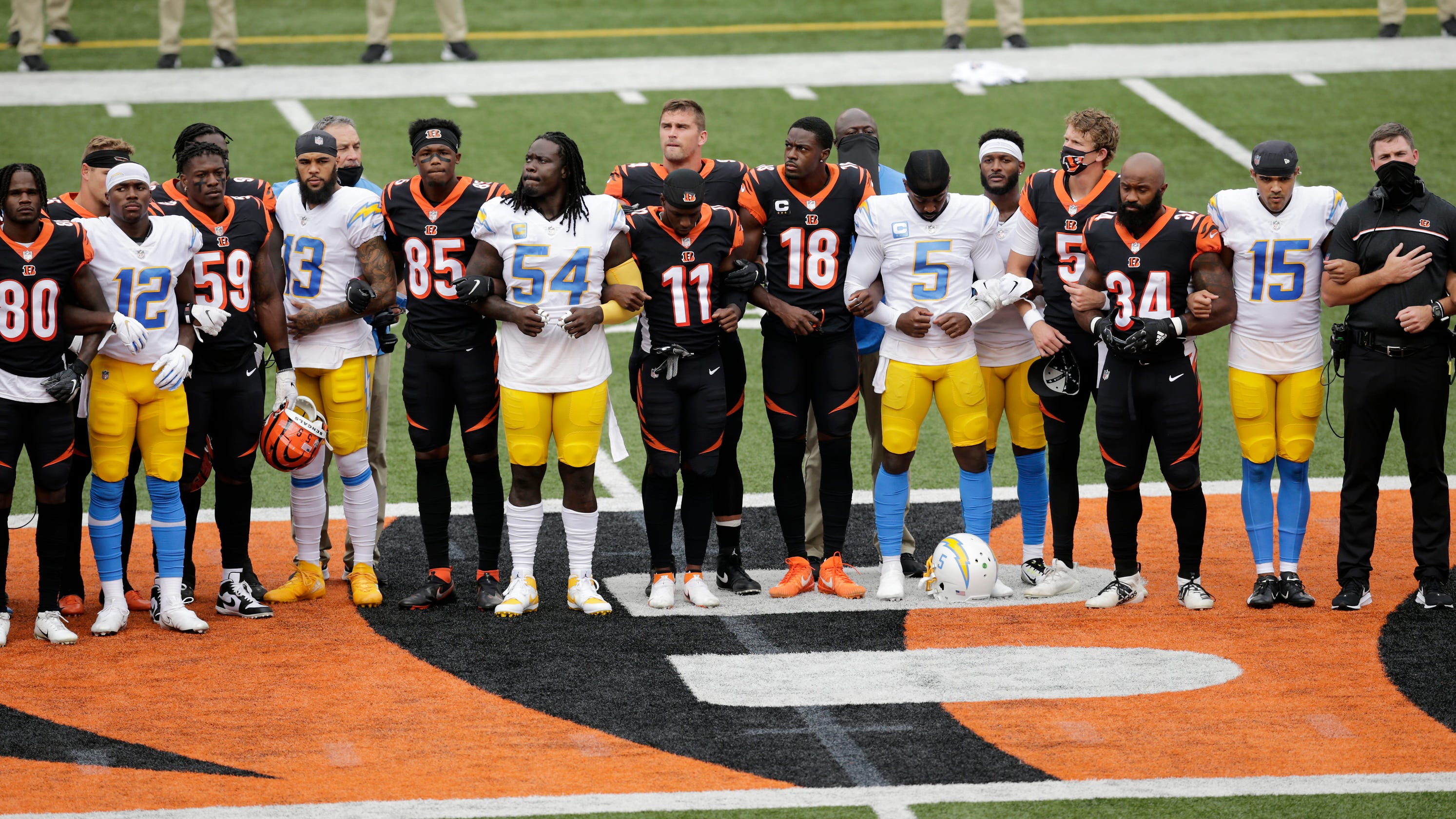 Let’s save ourselves some headaches for the next two months and dispense with the nonsense.

The NFL is not dying. Throngs of fans are not turning off their televisions – or phones or tablets or however else they’re watching – in disgust over the player protests for racial justice. Sponsors are not rethinking their association with the league for fear of consumer backlash.

The NFL is, and will continue to be, the ratings and revenue juggernaut it has been for the past 30 years.

“There was a lot of negative talk coming from politics the last couple of years with the protests, and probably some out there wished there’d be a downturn like they hoped,” said Andrew Brandt, a former agent and Green Bay Packers executive who is now the executive director of the Moorad Center for Sports Law at Villanova.

Protests and other political statements from players during the opening week of the season didn’t stop fans from watching the NFL in big numbers. (Photo: Sam Greene, USA TODAY Sports)

“As soon as someone who takes that view zooms out and sees other sports in comparison to the NFL, there is no comparison,” Brandt added. “At any level.”

This narrative that America is souring on the NFL dates back four years, to when Colin Kaepernick began taking a knee to protest police brutality against Black and brown people and was soon joined by other athletes. Their message was co-opted by Donald Trump, who saw the protests as an opportunity to rile up his base during the presidential campaign.

Trump ramped up the outrage after he was elected, saying anyone who protested was a “son of a bitch” and demanding that NFL owners fire them. His followers claimed they would never watch the NFL again and, while it’s true ratings did drop in 2016 and 2017, they’ve rebounded – and then some – the past two seasons.

Now comes a new, wider wave of protests, these with the explicit blessing of the NFL, and the rumblings about the league’s demise have started anew. Only, they’re even more ludicrous now.

Let’s take a look at some numbers, shall we?

► Fox had its first opening weekend of the season since 2016, led by the nearly 26 million who tuned in to watch Tom Brady and the Tampa Bay Buccaneers – sorry, that’s never not going to be weird – take on Drew Brees and the New Orleans Saints. It was the most-watched television program since the Super Bowl.

► NBC’s Sunday Night Football had its worst season opener since 2008, a drop of 15% from last year. And, yet, it still drew almost 19 million viewers, which would have put it in the top-20 telecasts of 2019.

► Despite a pandemic that has caused companies to put the brakes on spending, the NFL signed four new sponsors this year and kept all its previous ones. That gives the NFL a total of 34 corporate partners, an abundance of marketing riches.

► Fanatics sales of NFL merchandise for the opening weekend were up 35% over last year, according to Michael Rubin, the company’s executive chairman. It’s the company’s best start to the NFL season, Rubin said.

So, no, not dying. Not failing. Not anywhere close to becoming irrelevant.

“I like to use the word Teflon on this,” said Marc Bluestein, president and CEO of Aquarius Sports and Entertainment.

“It’s the power of their brand and the power of their audience reach,” said Bluestein, who has arranged marketing deals for both the NFL and individual teams. “When you look at the aggregate of all of the (NFL’s) audiences, hands down the NFL delivers – by multiples more than any other sports league.

“It is where people are,” he added. “If a marketer is trying to reach both men and women in a really large universe at one time, the NFL does that.”

The NFL’s popularity is rooted in history. Fans are loyal to their local teams or those their parents and grandparents rooted for, of course. But unlike the NBA and Major League Baseball, where interest – and accessibility – was largely regional before the cable superstations, the NFL has had a national television package since the 1960s.

At a time when the NBA Finals were still being shown on tape delay, the NFL had regular-season games live on national television. People with no natural allegiances got hooked on the sport they could watch each week, in real time. It’s why you’ll find Dallas Cowboys fans in Montana, and Pittsburgh Steelers fans in South Carolina.

By the time the NBA, NHL and Major League Baseball caught up, the NFL was firmly entrenched in American culture.

But the figure that perhaps best explains why protests this season won’t pose a threat to the NFL is 56. That’s the percentage of Americans who now believe it’s appropriate for athletes to kneel during the national anthem in protest of police brutality, according to a Washington Post poll last week.

That result is similar to a Yahoo News/YouGov poll earlier this summer, which found 52% supported athlete protests.

Sure, there will be some fans incensed that NFL players have the audacity to ask the country to recognize their humanity. When the Kansas City Chiefs and Houston Texans came together for a show of unity before Thursday night’s game, there were some audible boos among the smattering of fans in attendance at Arrowhead Stadium.

But the deaths this year of George Floyd, Breonna Taylor and Ahmaud Arbery have forced the country to acknowledge systemic racism in a way it hasn’t since the civil rights movement. Unlike four years ago, when irate fans accused the NFL of “changing,” there’s a recognition now that it’s the country that is different, and the protests, demonstrations and calls to action by players, coaches and even the league are a reflection of that.

Even Trump seems to recognize that his favorite dog whistle has lost its potency, with his tweet on Monday about Week 1 protests barely even registering on the usual Rage-o-Meter.

“There’s no effective threat to the NFL at this point on the horizon,” Pilson said. “… The basic strength of the NFL is it’s available to every home in the country. I think the only threat to the NFL would be silly decisions by the league itself.

“And they are not in the business of making silly decisions.”

That won’t stop some, probably even the president, from making silly claims as we get closer to the Nov. 3 election. There will probably even be a few fans who will huff and howl, insisting they’re never going to watch the NFL again.

But save yourself some time and ignore the noise. The NFL is going to be fine.