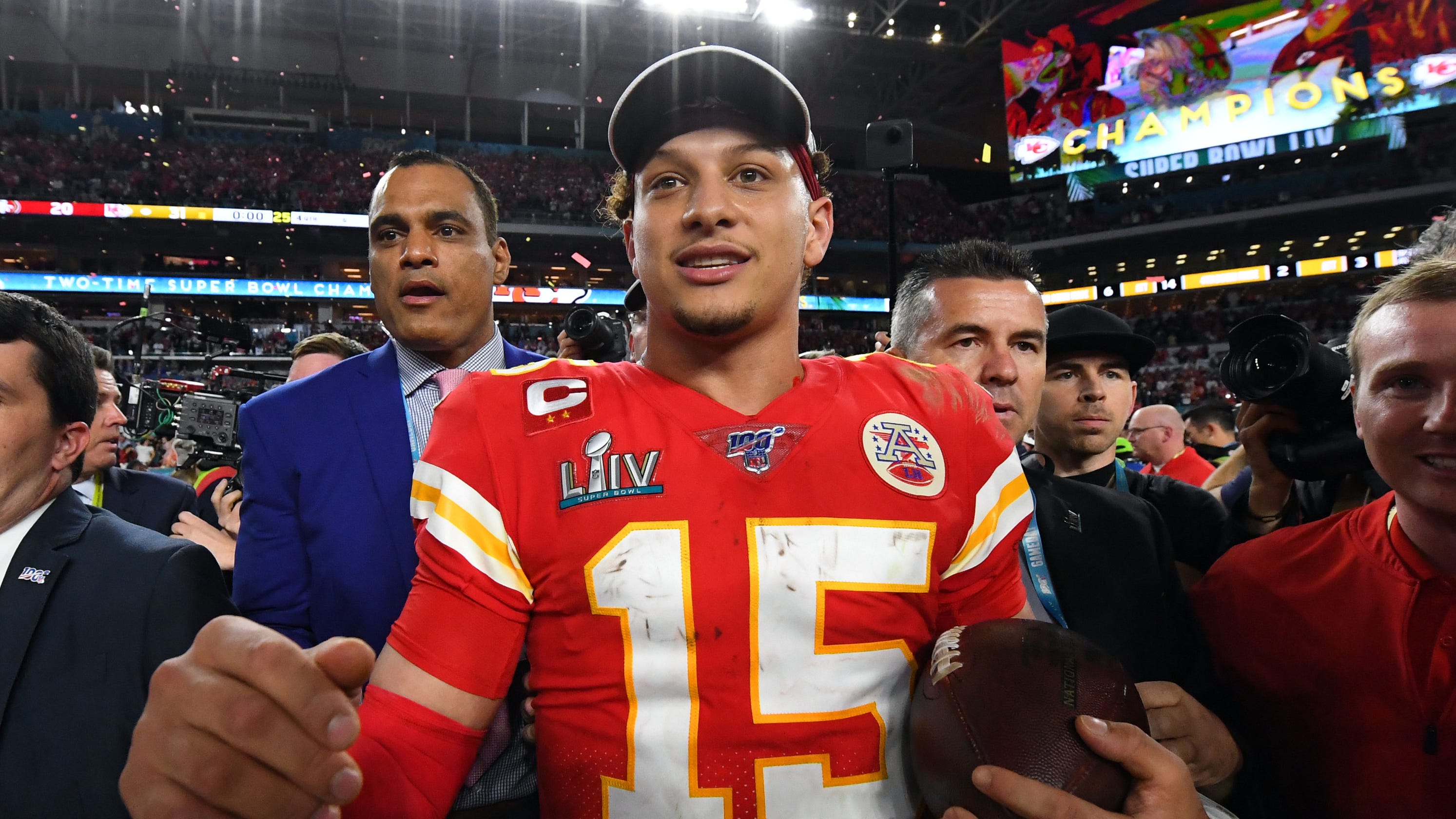 Patrick Mahomes and 25 other top athletes age 25 and under

What I’m Hearing: Mahomes has worked hard during the off season and it shows

It’s been said that “youth is wasted on the young.” But that’s not true in all cases — especially in professional sports.

While an athlete’s career can take any number of paths, the best of the best show excellence at a very young age.

If anyone were foolish enough to compile a list of the top athletes 25 and under, Mahomes would certainly have to be included. But who else would make the cut?

Ronald Acuña Jr., 22, baseball. The Atlanta Braves outfielder won the National League rookie of the year award in 2018, then followed it up with an All-Star campaign in 2019. He led the NL last season in runs scored (127) and stolen bases (37), while hitting 41 homers and driving in 101 runs for the NL East champions.

Giannis Antetokounmpo, 25, basketball. The 2019 NBA MVP and this season’s defensive player of the year, the 6-foot-11 “Greek Freak” has been named to the Eastern Conference All-Star team in each of the past four seasons, the last two as team captain. The Milwaukee Bucks forward averaged a career-high 29.5 points and 13.6 rebounds this season.

Saquon Barkley, 23, football. The No. 2 overall pick in the 2018 NFL draft, the New York Giants running back scored 11 touchdowns and led the league with 2,028 yards from scrimmage as a rookie. He rushed for more than 1,000 yards last season despite playing in only 13 games.

Ashleigh Barty, 24, tennis. Currently the No. 1-ranked women’s player in the world, the Australian has won eight titles on the WTA Tour — including the 2019 French Open. She’s also an accomplished doubles player, winning the 2018 U.S. Open with partner CoCo Vandeweghe.

Simone Biles, 23, gymnastics. A world champion for the first time at age 14, Biles can stake a claim as the greatest gymnast in history. She led the USA to the team gold at the 2016 Rio Olympics. Individually, Biles won gold in the floor exercise, vault and all-around competitions with a bronze in the balance beam. She then won seven more individual golds at the 2018 and 2019 World Championships.

Luka Doncic, 21, basketball. The Dallas Mavericks guard established himself as one of the NBA’s best players this season, averaging 28.8 points, 9.4 rebounds and 8.8 assists. He reached an even higher level in the playoffs, becoming one of three players to record a 40-point, 15-assist, 10-rebound triple-double in a postseason game — joining Oscar Robertson and Charles Barkley.

Chase Elliott, 24, auto racing. The son of NASCAR legend Bill Elliott has already made a name for himself in just six seasons as a Cup Series driver. As the 2020 season draws to a close, Elliott has eight Cup victories to his credit, including this year’s All-Star Race. He was named the series’ most popular driver in both 2018 and 2019.

Sam Grewe, 22, paralympics. Despite contracting osteosarcoma at age 13, which resulted in his right leg being amputated below the knee, Grewe became a world-class high jumper. He earned a silver medal in the 2016 Rio Paralympics in between winning back-to-back golds in the 2015 and 2017 World Championships.

Miro Heiskanen, 21, hockey. The Finland native has just 68 points in 150 career regular-season games, but he has quickly become the Dallas Stars’ most complete defenseman. He’s enjoyed a breakout postseason with 22 points in 21 games to help lead the Stars to the Stanley Cup Final.

Lamar Jackson, 23, football. Last year’s unanimous selection for NFL MVP led the Baltimore Ravens to a league-best 14-2 record. He set a record for rushing yards by a quarterback (1,206) and also led the league with 36 touchdown passes.

Chloe Kim, 20, snowboarding. Kim became the youngest woman to win an Olympic snowboarding gold medal in 2018 when she took home the gold in the women’s halfpipe at age 17. She’s also a four-time gold medalist at the Winter X Games.

Rose Lavelle, 25, soccer. One of the key cogs of the Women’s World Cup championship squad for the USWNT, Lavelle scored the winning goal in the final against the Netherlands. The midfielder currently plays for Manchester City in the English Women’s Super League in addition to her U.S. women’s national team duties.

Katie Ledecky, 23, swimming. Quite simply the most dominant freestyle swimmer in history, Ledecky has set 14 world records and won 15 world championship gold medals (the most ever by a female swimmer). The high point of her career to date came at the 2016 Rio Games, where she won gold in the 200-, 400- and 800-meter freestyle.

Connor McDavid, 23, hockey. The top pick in the 2015 draft, McDavid has scored 100 points or more three times in five seasons and had 97 this season before the coronavirus pandemic shutdown. He has two scoring titles and one MVP award.

Donovan Mitchell, 24, basketball. The Utah Jazz shooting guard has averaged at least 20 points in each of his first three NBA seasons. During this year’s playoff series loss to the Denver Nuggets, Mitchell became only the third player in NBA history to have multiple 50-point games in one series.

Naomi Osaka, 22, tennis. The reigning U.S. Open women’s singes champion, Osaka now has three Grand Slam titles to her credit. She’s won a total of six WTA titles and has previously been ranked No. 1 in the world.

Christian Pulisic, 21, soccer. Widely seen as the future of American soccer, Pulisic made his U.S. national team debut in 2016 at age 17. As the youngest player to serve as national team captain in the modern era, Pulisic led the U.S. to the 2019 CONCACAF Gold Cup final. He plays professionally for Chelsea in the English Premier League.

Mikaela Shiffrin, 25, skiing. The world’s dominant slalom skier has won the World Cup season title six times. At the 2014 Olympics at 18, she became the youngest to win Olympic gold in slalom. Four years later, Shiffrin won gold in the giant slalom and silver in the combined.

Juan Soto, 21, baseball. The Washington Nationals outfielder made his major league debut in 2018 at age 19 and instantly became one of the team’s best players, finishing second to Ronald Acuña Jr. for NL rookie of the year. In 2019, he hit 34 homers with 110 RBI in leading the Nationals to the franchise’s first World Series title.

Fernando Tatis Jr., 21, baseball. One of the most exciting players in the majors, the San Diego Padres shortstop entered Tuesday’s games leading the National League in home runs (15) and runs scored (46). Despite playing in only 84 games in 2019, he still finished third in the NL rookie of the yYear balloting after hitting .317 with 22 home runs and 16 stolen bases.

Jayson Tatum, 22, basketball. The Boston Celtics forward emerged this season as a top-10 player, solidifying that with his versatile scoring and defense during the playoffs. The No. 3 overall pick in the 2017 draft, Tatum was an All-Star for the first time this year, averaging 23.4 points and 7.0 rebounds per game.

Lexi Thompson, 24, golf. Thompson first made headlines at age 12, when she became the youngest golfer to qualify for the U.S. Women’s Open. She turned pro at age 15 and the following year became the youngest player to win an LPGA event. She’s gone on to post 11 LPGA wins, including one major: 2014 Kraft Nabisco Championship (now the ANA Inspiration).

A’ja Wilson, 24, basketball. The No. 1 overall pick in the 2018 WNBA draft and rookie of the year, Wilson was just named the AP WNBA Player of the Year after averaging 20.5 points, 8.5 rebounds and two blocks for the Las Vegas Aces in the 2020 regular season. In college, she helped lead South Carolina to the 2017 national championship and was the consensus college player of the year following the 2017-18 season.

Disagree with our choices? Did we leave out someone obvious? Give us your feedback on Twitter @USATODAYSports.