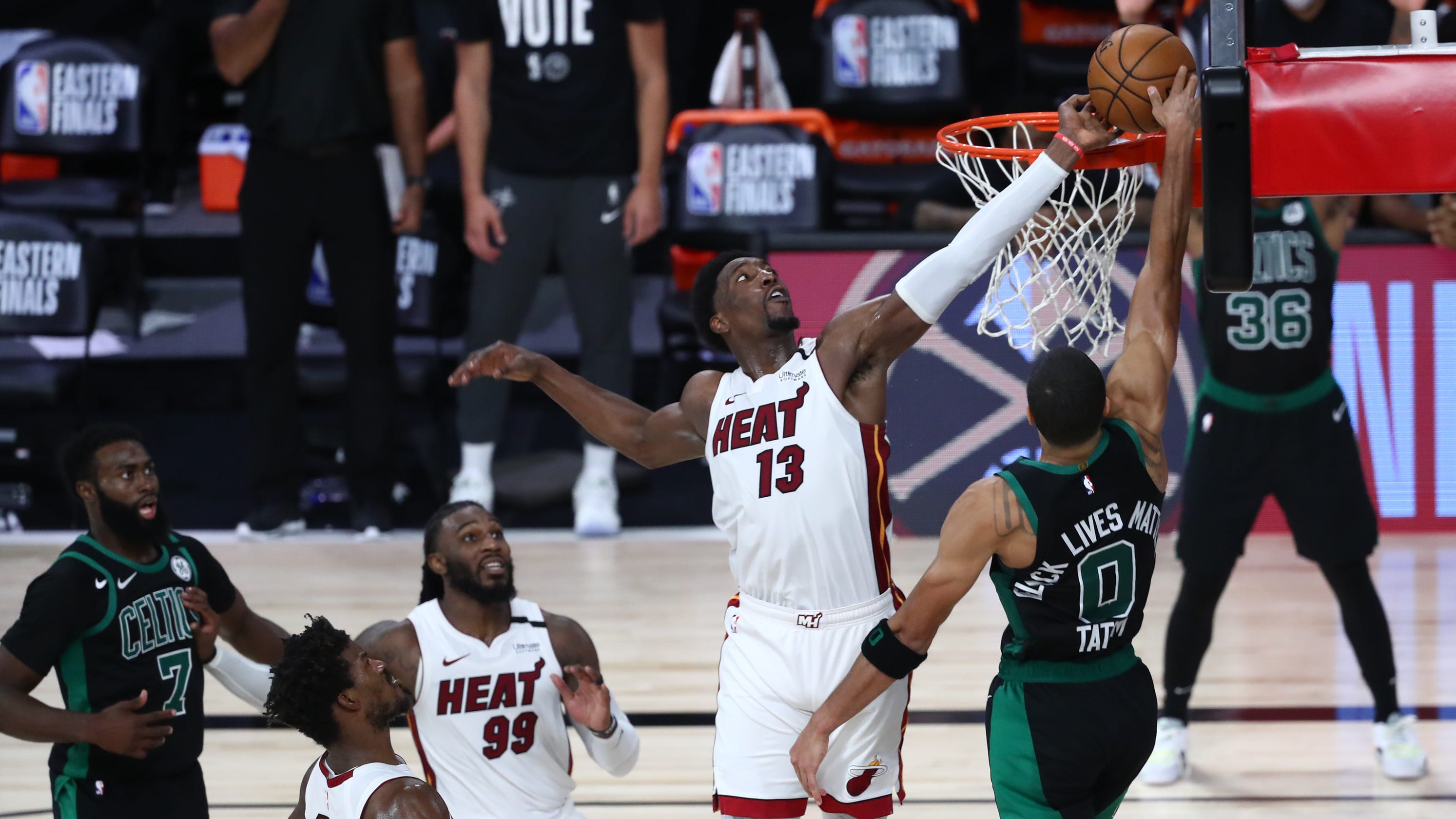 The tweets from Magic Johnson were doled out to the general public with the speed of one of his well-timed passes.

Miami Heat forward Bam Adebayo blocked Boston Celtics star Jayson Tatum at the rim with 2.5 seconds left to seal a 117-114 overtime win Tuesday in Game 1 of the Eastern Conference Finals. Johnson then described Adebayo’s block as “the best defensive play I’ve seen ever in the playoffs!!!!”

Moments earlier, Jimmy Butler made a floater and a free-throw to give the Heat a 116-114 cushion with 12 seconds left in overtime. Johnson addressed Butler with his “Buckets” nickname before adding that his play “sealed the game.”

Jimmy “Buckets” Butler’s 3-point play in Game 1 sealed the game for the Miami Heat in an overtime thriller!!!

“You get on that big stage, you just got to make big plays and I made a big play,” Adebayo said. “Coming from Magic, that’s a great comment from him.”

Bam Adebayo’s block on Jayson Tatum’s dunk attempt was the best defensive play I’ve seen ever in the playoffs!!!!

Johnson might be prone to hyperbole and state the obvious on Twitter. This time, though, the comments fully captured what made the Heat’s Game 1 win so special. Not only did Butler and Adebayo make the highlight reels, they made winning plays in pressure-packed moments with significant stakes.

“That’s what it takes to win championships. I would agree with him,” Butler said of Johnson’s comments. “What Bam did to save the game to make sure we win it by putting his body on the line? That is a really good play.”

How did this “really good” play unfold?

Following Butler’s 3-pointer, the Celtics called timeout to set up an inbounds play near halfcourt. Naturally, the ball ended up in Tatum’s hands at the top of the key. Butler drew the defensive assignment. Tatum blew past Butler, but the Heat star funneled him toward the basket out of trust for Adebayo.

Though he was responsible for guarding Celtics guard Marcus Smart, who was having a great shooting game, out on the perimeter, Adebayo rotated over after he saw Tatum take two steps toward the basket. Adebayo then jumped into the air and swatted the ball as Tatum attempted a dunk. After drawing a foul, Adebayo sank one of two foul shots for a 117-114 cushion with 2.5 seconds left.

“He’s willing to put himself out there. That can be a poster dunk,” Heat coach Erik Spoelstra said. “A lot of people aren’t willing to make that play and put themselves out there. Jayson Tatum is getting into a launching pad and he just made a big-time save.”

It was a big-time save that Adebayo said he made on instinct, bringing relief after he played the entire fourth quarter and overtime. Adebayo hardly flinch when asked how he would rank this sequence to anything he has ever done on a basketball court.

Granted, Adebayo admitted he “would rather us not be in that position at the end of the game.” The Heat had trailed by 13 points to open the game, and were in a 14-point deficit in the fourth quarter.

Yet, Adebayo noted that his play “was definitely a confidence-booster.” Not only for himself, but also for the Heat’s belief in themselves. All season long, they have leaned not just on their stars, but on role players to thrive in pressure-packed situations.

The next notable example pointed to is Butler’s play. Not only did Butler go one-on-one against Tatum to finish with a floater and subsequent free throw in overtime. He earlier made a 3-pointer with 22 seconds left in regulation to give Miami a one-point lead.

After joining the Heat on a sign-and-trade from Philadelphia, Butler has impressed Miami all season with his model behavior, competitiveness, team-oriented play and clutch play. So the way things are going, Butler may as well increase his charging price for his own coffee that he has promoted in the NBA bubble.

Jimmy Butler shoots in the second half of Game 1 against the Boston Celtics. (Photo: Kim Klement, USA TODAY Sports)

“You put the ball in your best players’ hands,” Spoelstra said. “They have to make a play, make or miss. The most important thing about that is having guys who are willing to put themselves out there.”

After impressing the Heat all season long with his steady leadership and command of the offense, Miami guard Goran Dragic had 29 points while going 11-of-19 from the field and 3-of-6 from 3-point range. He also had 11 second-quarter points after Miami went only 6-of-22 from the field in the first.

After impressing the Heat all season with his ongoing rookie development, Miami guard Tyler Herro had 12 points, including two 3-pointers in the final three minutes of regulation.

After impressing the Heat all season with his outside shooting, Miami forward Jae Crowder made a 3-pointer that gave the Heat a 111-110 lead with 3:05 left in overtime.

And, the Heat forced Tatum to miss a combined seven shots in the final six minutes of regulation and overtime. That included Tatum missing a 27-footer with 0.9 seconds left as well as Adebayo’s key block in overtime.

“You have to find different ways to impact winning. We have a lot of guys that understand that concept,” Spoelstra said. “It doesn’t guarantee anything. We’re facing a very good team in Boston. So we have to get to work and figure out how we can take our game to another level.”

The Heat figured that out just fine in Game 1, resulting in Johnson sharing a few tweets that, for once, were not exaggerated.