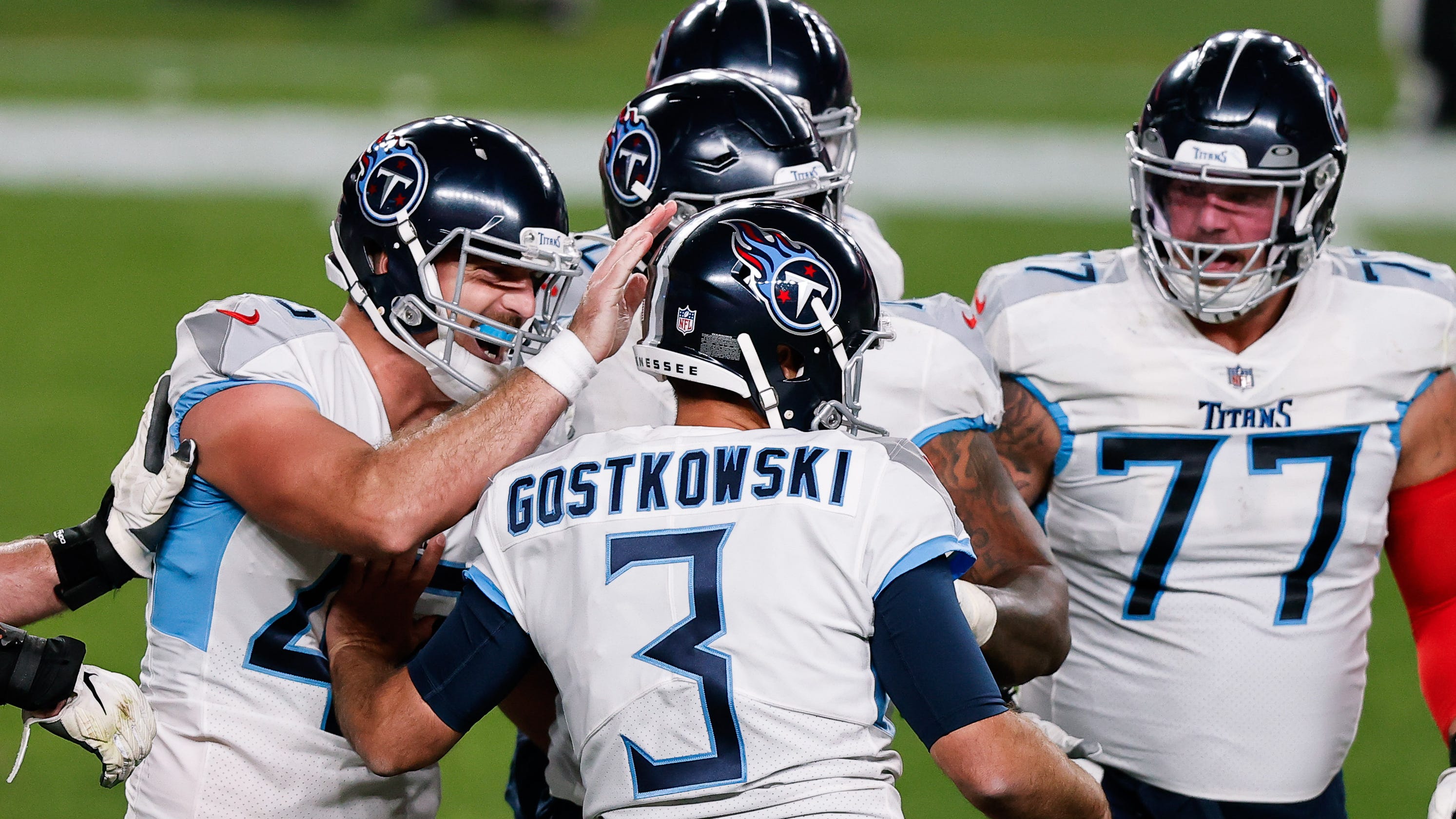 DENVER — The Tennessee Titans returned to the scene of their 2019 nightmare, this time armed with a revamped offense and the biggest prize in free agency.

But also, the same fatal flaw that haunted them in 2019.

In spite of that flaw — horrific field goal kicking — the Titans somehow, someway pulled out a 16-14 win against the Denver Broncos on “Monday Night Football” about 11 months after after they were shut out at Empower Field at Mile High.

As the fourth quarter unfolded, the Titans defense continued to come up with stops to give the offense chances to re-take the lead. On their final drive, Tennessee quarterback Ryan Tannehill marched the offense into field goal range to give Stephen Gostkowski his fourth field goal attempt — after he had missed his first three.

Lo and behold, Gostkowski was good from 25 yards and the Titans moved to 1-0 in the most improbable of ways.

Tannehill had two touchdown passes that went to tight ends MyCole Pruitt and Jonnu Smith, both from inside the red zone. He orchestrated a 12-play, 67-yard drive to put Gostkowski in position for the winning field goal.

Stephen Gostkowski is congratulated by teammates after kicking the go-ahead field goal in the final seconds of the Titans’ win over the Broncos. (Photo: Isaiah J. Downing, USA TODAY Sports)

Here are five observations from the opener:

In 2019, the Titans were abysmal kicking field goals, finishing last in the league in makes (eight) and last in percentage (44.4%).

The nightmare lived on Monday as Stephen Gostkowski, signed earlier this month by the team, missed his first two kicks of the night from 47 and 44 yards, respectively. His second kick was partially blocked.

Then, in the second half, Gostkowski missed a third time, this time from 42 yards away. He later missed an extra point.

It was Gostkowski’s 205th career regular-season game, and his first with three missed field goals.

Gostkowski puts the @Titans ahead with 17 seconds remaining! #Titans

The Broncos entered Monday’s game as winners of 18 of their last 20 home games, a testament to their home crowd.

But that factor was mitigated by a fan-less Empower Field at Mile High. Cardboard cutouts filled the stands before the end zones, but the stands were otherwise empty.

Both teams’ entrances were accompanied by silence — despite the public address announcer saying, “Fans, on your feet for your 2020 Denver Broncos!” with tongue-in-cheek.

The Titans declined to pick up the fifth-year option on Corey Davis, meaning the wide receiver will hit free agency for the first time next offseason.

Davis was largely upstaged by then-rookie A.J. Brown last season, but on Monday, Davis served as Ryan Tannehill’s top target. He caught three passes over the middle, each for big chunks of yardage. On the team’s final drive of the half, his toe-tapping catch near the sideline was initially ruled incomplete before the call was overturned.

Davis finished with eight catches for 101 yards, which is more than he had in any game in 2019.

Rashaan Evans lost his composure in the first quarter of the Titans’ season-opening game against the Broncos, and it cost him.

The Titans’ third-year inside linebacker was disqualified from the game after throwing a punch at Denver tight end Jake Butt following a play. Will Compton replaced him.

Penalties were a problem early for the Titans; they committed four in the first quarter.

Defense delivers in the clutch — but has one key flub

A couple of key moments by the defense helped the Titans remain in a tie at 7 by halftime.

The Titans’ first-half score — a 1-yard completion from Tannehill to MyCole Pruitt — was preceded by a turnover by the defense. Kevin Byard forced a fumble and Jeffery Simmons recovered it to set the Titans up near the red zone. Later in the second quarter, the Broncos had a first down at the Titans’ 2-yard line, but four straight stops by the defense forced a turnover on downs.

Toward the end of the third quarter, the defense faltered. After the Titans had scored a touchdown to go up 13-6, the Broncos used a nine-play, 75-yard drive to take a 14-13 lead early in the fourth quarter.

But the unit gave the offense a shot late twice, forcing two punts inside the final five minutes.

Of note, recently signed edge rusher Jadeveon Clowney was impactful immediately. Signed earlier this month to a one-year deal, Clowney looked right at home in Vrabel’s defense. The 27-year-old played was on the field for the unit’s first 11 plays and provided an immediate impact. He had three total tackles, including a tackle for a loss, and a quarterback hurry by halftime.