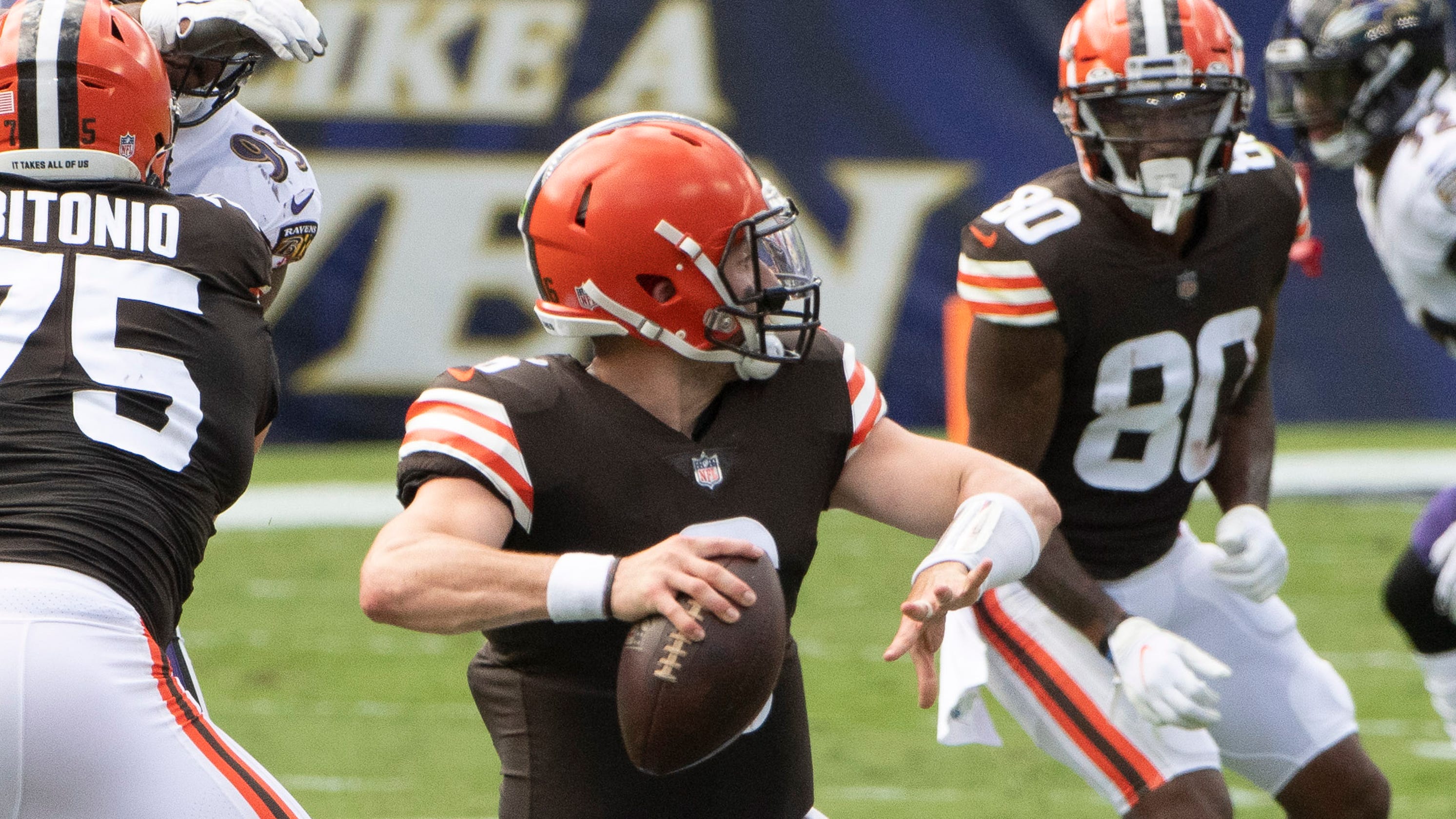 Cleveland Browns coach Kevin Stefanski wouldn’t say if he told quarterback Baker Mayfield to get the ball to Odell Beckham Jr. at halftime Sunday at Baltimore.

But it certainly appeared that way.

The Browns trailed 24-6 to start the third quarter en route to a 38-6 loss and on their opening series, Mayfield threw six incompletions to Beckham. Three were nullified by defensive penalties, but the seven-play drive netted 31 yards, 5 by the offense.

“He’s a good football player, so I don’t think it’s newsworthy that he’s a focal point of our offense,” Stefanksi said via Zoom on Monday.

In M&T Bank Stadium, Beckham was targeted 10 times and caught three passes for 22 yards, his second-lowest yardage total in 76 career games. His low of 20 came last Sept. 29 in a victory at Baltimore.

More concerning is the trend that continued for Beckham and the Browns.

In his seven-year career, Beckham has been held under 30 receiving yards six times, four of those in the past 14 games, all with Mayfield.

In 2019, Beckham caught 74 passes on 133 targets (55.6 percent). While playing with a core muscle injury that required surgery, Beckham reached 1,000 yards for the sixth time with 1,035 yards, but scored only four touchdowns. He did not make the impact expected after being acquired in a blockbuster trade with the New York Giants in March, 2019.

For the Browns to avoid an 0-2 start as they host the Cincinnati Bengals for a nationally televised game Thursday night, improving the connection between Mayfield and three-time Pro Bowl receiver Beckham is among the Browns’ top priorities.

Stefanski said he “definitely” sees hope for the less-than-dynamic duo.

“I don’t think he was forcing the ball,” Stefanski said of Mayfield in regards to Beckham. “We didn’t connect as much as we would like to. I think it’s a combination of things and you’ve got to start with [the Ravens]. Give them credit, they made some plays.

“A couple balls I’m sure Baker wants back, a couple routes I’m sure Odell wants back. But that’s the nature of this thing. We’ve got to make sure we work real hard this week, then get out there Thursday night and put our best foot forward.”

Part of the issue could be the matchup with Ravens Pro Bowl cornerback Marlon Humphrey. Beckham was targeted seven times and caught two in the first 2019 matchup of the AFC North foes and Humphrey had two passes defensed.

First-year coach Stefanski said the Browns don’t need more time to figure out how to use Beckham.

“I think we’ve got a pretty good feel for Odell and his skill set,” Stefanski said. “He’s a talented football player. It’s our job to put him in position to make plays. Are we going to learn about him and what he’s comfortable with, what we’re comfortable with throughout the season? Yes, so that will grow. But I think we have a pretty good sense of it right now.

“We’re mindful of all our players in terms of how they’re touching it. There were opportunities early where the coverage took it away or somebody else was open.”

Mayfield blamed himself for Beckham’s lack of production.

“A few of those times where I did target him, there were some defensive penalties, so that had something to do with it, but I have to be better and give him a chance on some of those things,” Mayfield said Sunday via Zoom. “He’s a great player so I just need to give him a chance.”

But Beckham’s biggest mistake was not Mayfield’s fault.

The Browns faced third-and-2 from the Baltimore 23 with 50 seconds remaining in the second quarter and the Ravens leading 17-6. Mayfield found an open Beckham, who let the ball slip through his hands.