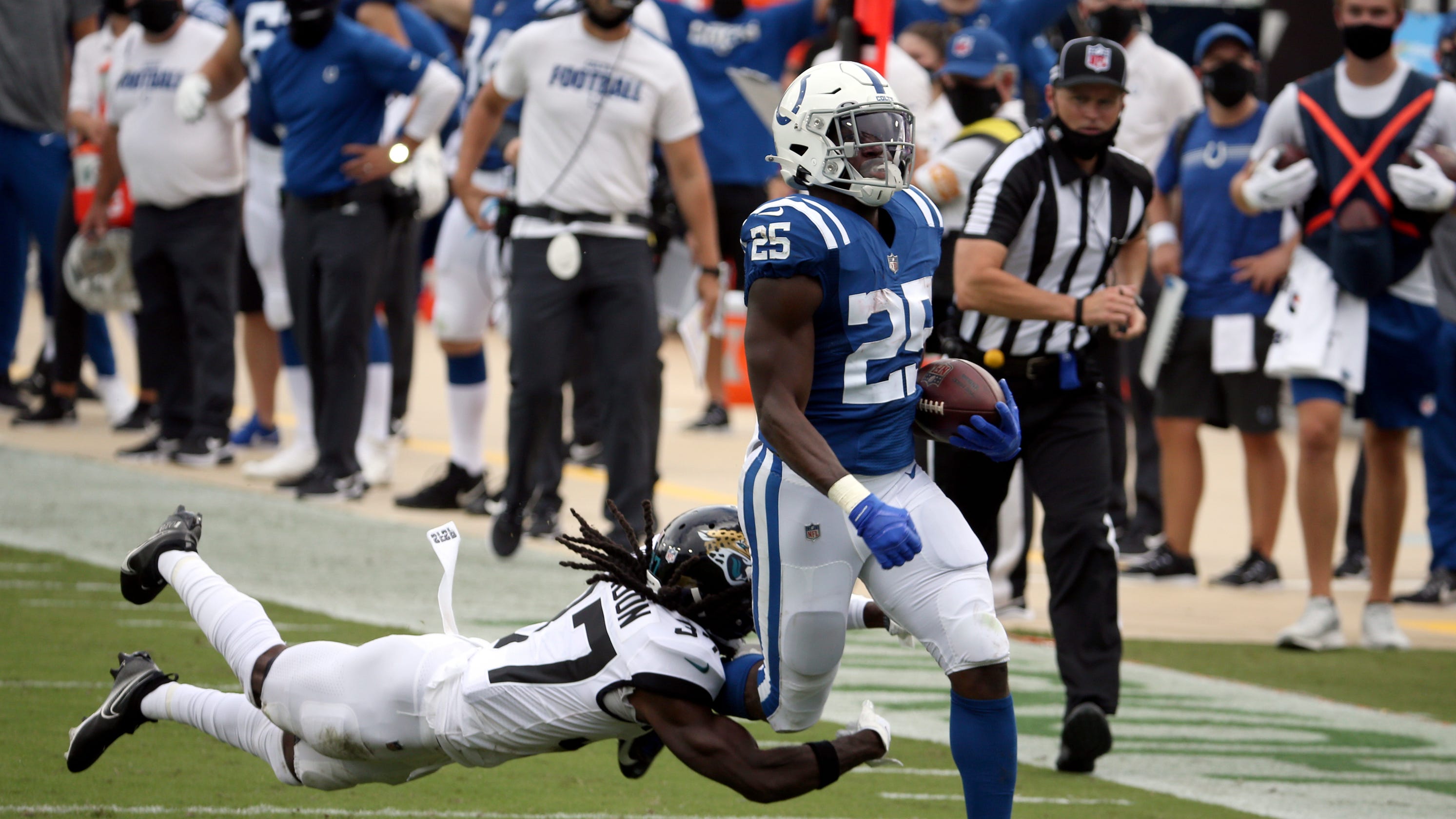 Insiders Jim Ayello and Joel A. Erickson discuss the Indianapolis Colts loss to the Jacksonville Jaguars.

Indianapolis Colts running back Marlon Mack is out for the season, Colts coach Frank Reich confirmed Monday afternoon, after rupturing his Achilles in Sunday’s season-opening loss to Jacksonville.

Mack will undergo surgery in the near future, a person with knowledge of the injury told the USA TODAY Network. The person spoke on condition of anonymity because they were not authorized to disclose the team’s plans.

For Mack, the timing couldn’t have been worse. The fourth-year running back was playing in a contract season. With second-round pick Jonathan Taylor in town, it didn’t seem likely he’d be back in Indianapolis next season, but now he’s been robbed of the chance to showcase his talents for other teams.

“Marlon’s beloved in our locker room, and was looking so good in camp and in his few snaps yesterday. Looked like lightning, Reich said. “The best football is still ahead for Marlon Mack. That guy is a class act and a great player.”

Indianapolis Colts running back Marlon Mack (25) runs for yardage as Jacksonville Jaguars cornerback Tre Herndon goes in for the tackle during the first half of an NFL football game, Sunday, Sept. 13, 2020, in Jacksonville, Fla. (Photo: Stephen B. Morton, AP)

Mack enjoyed a solid sophomore campaign but broke out in a big way last season, breaking the 1,000-yard barrier for the first time in his career. Even sharing touches with Taylor this season, he was primed for a big season behind a potent offensive line in Frank Reich’s run-heavy scheme.

Now, he’s facing a long road to recovery and an uncertain NFL future.

Meanwhile, the Colts will turn to the rookie Taylor as well as Nyheim Hines and Jordan Wilkins to pick up a bigger share of the workload.

Part of what the Colts called a “1-1 punch” ahead of the season, Taylor looks primed to earn the biggest uptick in usage. Such was the case Sunday in Jacksonville.

After Mack (four carries, 26 yards; three catches, 30 yards) exited with an injury, Taylor’s workload increased. He finished the game with nine carries for 22 yards to go along with six receptions and 67 yards.

Sunday, Hines proved he already will be a major part of the offense this season. He led the team in receptions with eight, totaling 45 yards and a touchdown. He also contributed 28 yards on the ground with another score.

Wilkins didn’t see a touch Sunday, but has proven during his two seasons in the league to be a more than reliable reserve. Expect him to get more heavily involved this coming Sunday during the Colts home opener against Minnesota.

The Colts also could add another running back to their stable. According to multiple league reports, the Colts plan to work out a trio of backs, most notably Lamar Miller. The former Miami Dolphins and Houston Texans star was most recently a member of the New England Patriots but was cut ahead of the season.

Miller missed the 2019 season after suffering a torn ACL in the Texans’ third preseason game. In 2018, his last full season, Miller rushed for 973 yards on 210 attempts with Houston. He added 163 yards through the air, him giving at least 1,000 scrimmage yards for the fifth consecutive season.

The Colts also will work out Darius Jackson and Benny LeMay once they pass COVID-19 tests.