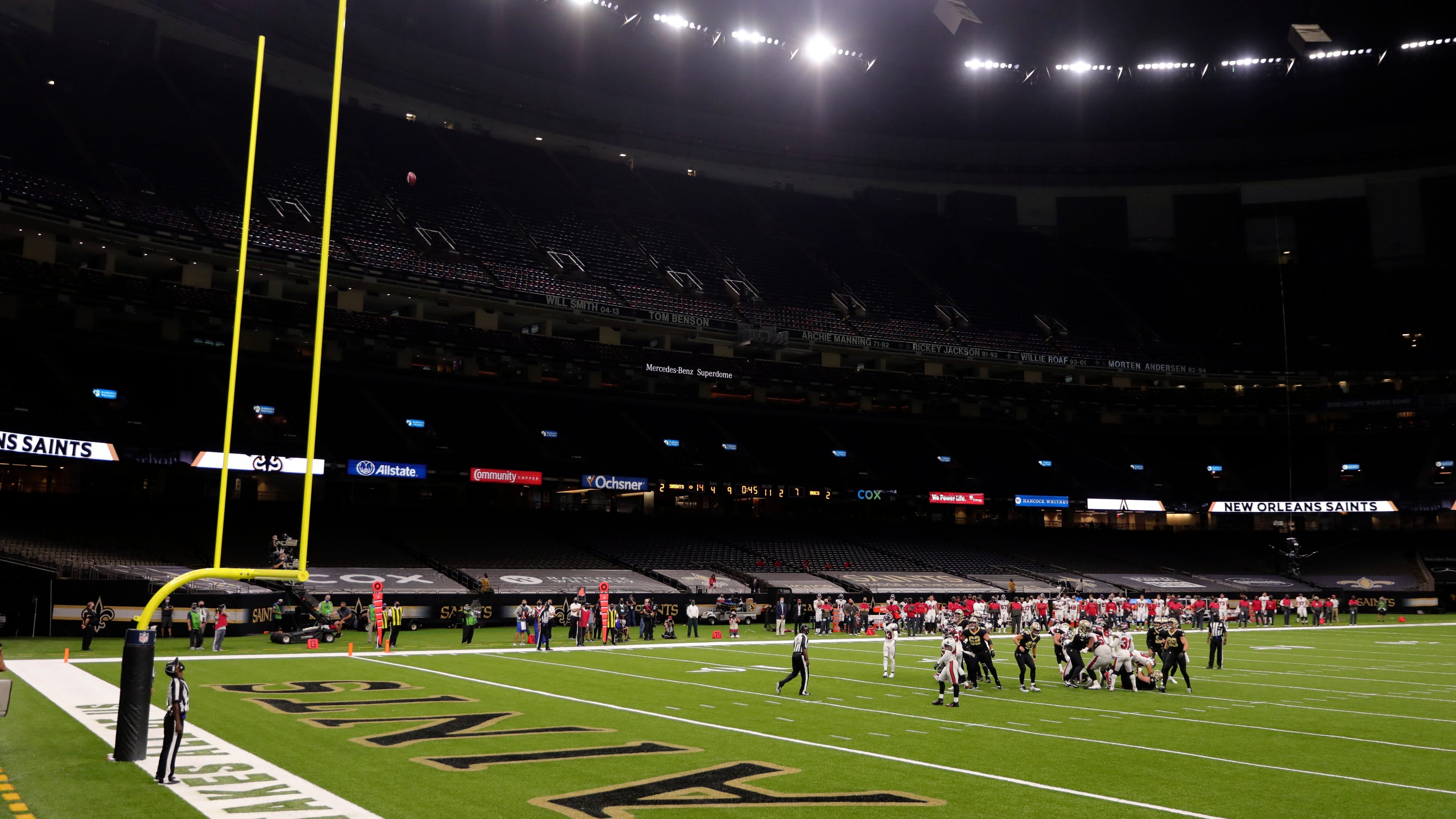 NEW ORLEANS – It would have been so festive, a grand party that had revelers dancing in the aisles at the Superdome and screaming “Who Dat?” as the New Orleans Saints rolled to a huge victory at the expense of Tom Brady in the season opener.

The music would have blared, especially the house soundtrack that tells everybody to get “crunk” to the backdrop of drums, brass horn and heavy bass.

Instead, the cavernous stadium had all of the charm of an empty airplane hangar on Sunday as the Saints put a thumping on the Tampa Bay Buccaneers.

It was so quiet in what is normally one of the NFL’s most raucous venues that the sizzle from the smoke machines used during the pregame introductions could be heard near the rooftop. So serene, even with artificial crowd noise pumped in, that some of the loudest sounds came from the thud on kickoffs.

The New Orleans Saints and the Tampa Bay Buccaneers play in the Superdome with no fans, as a result of the coronavirus pandemic, in the first half of an NFL football game in New Orleans, Sunday, Sept. 13, 2020. (Photo: Brett Duke, AP)

With fans prohibited from attending games at most stadiums due to COVID-19 regulations, the NFL staged Week 1 of its determined season under conditions that many participants across the league compared to practice sessions.

No surprise that it was different, subtracting 75,000 fans from the equation. Yet even for players who believed they had seen everything in pro football, the experience was surreal.

“You definitely had to bring your own energy, which was different,” Cook said. “Our fans fuel us. People get us going.”

The league is attempting to add some ambiance by allowing for a loop of background crowd noise played through PA systems, but that is not to be confused for anything close to simulating game-day atmosphere. The fake noise is mandated at 70 decibels. Seventy decibels? Shoot, they routinely hit triple-digits when the ‘Dome is packed.

It’s no wonder that Drew Brees likened 70 to a whisper.

“I was kind of disappointed,” Bucs coach Bruce Arians said of the murmur.

And that came from the visiting coach who lost, adding that the noise he pipes in at practices is louder than 70 decibels.

“I don’t think it was fair to the Saints to have it that low because you can have an easy conversation across the field to somebody,” Arians said. “It’s not a very good deal. It should be fixed.”

Until further notice and their local governments deem it safe enough for large crowds to gather, many players and coaches will have to accept that they are playing key roles in “studio football,” just as MLB is in a similar boat and the NBA is playing out its season in a “bubble.”

“We wish that we had fans out there,” Brees said. “At this stage … this is the normal for now.”

Saints defensive end Cameron Jordan took a swipe at Bucs fans and compared the mellow atmosphere on Sunday to playing at Tampa.

Still, a break in the monotony came from an unsuspecting crew. About a dozen or so inactive Saints players, including practice squad members, sat in the stands and cheered. As they whooped and wave towels, their voices echoed throughout the stadium.

“Our guys got live!” Jordan said. “It’s sort of interesting, to know those guys personally. That gave us our energy spark. You’ve got to take the energy where you can.”

Brees said that one of things he missed from not having full house was the instant feedback.

“You’re waiting for that fan reaction,” Brees said, “like that big cheer on big offensive play, big defensive stop or special teams play whatever it might be.”

With football stripped down to the bare essentials, it’s evident how important that energy can be for generating big plays. The Saints had quite a few of those moments in handling the Bucs. On more than one occasion, a group of players sprinted to the end zone and mugged for the cameras and each other, just as they had in previous years. It used to be they’d also get showered with cheers for such celebrations.

Just don’t suggest that the crowd doesn’t make a difference. In defending the league’s allowance for some teams to permit a number of fans at games (based on health and governmental regulations) while other stadiums are empty, NFL Commissioner Roger Goodell insisted recently that there is no significant home-field advantage for teams.

For some teams, there’s probably not an advantage. But in places like New Orleans, Kansas City, Minneapolis and Seattle, to name a few, it’s tough to argue that the electric atmosphere doesn’t make a difference.

Ask a visiting offensive lineman trying to hear the snap count through the crowd noise. Or a quarterback calling signals. Or a safety switching coverages as a pre-snap adjustment.

Then there’s the “natural sound” that was previously drowned out by crowd noise. Now the TV broadcasts are prone to pick up a few choice words coming from the heat of the moments.

Asked if he hopes the crowd noise is louder for the Bucs’ home opener at Raymond James Stadium on Sunday, Arians liked the idea.

“My mom probably wants it louder, too,” he said, “so she doesn’t hear me cussing all the time.”