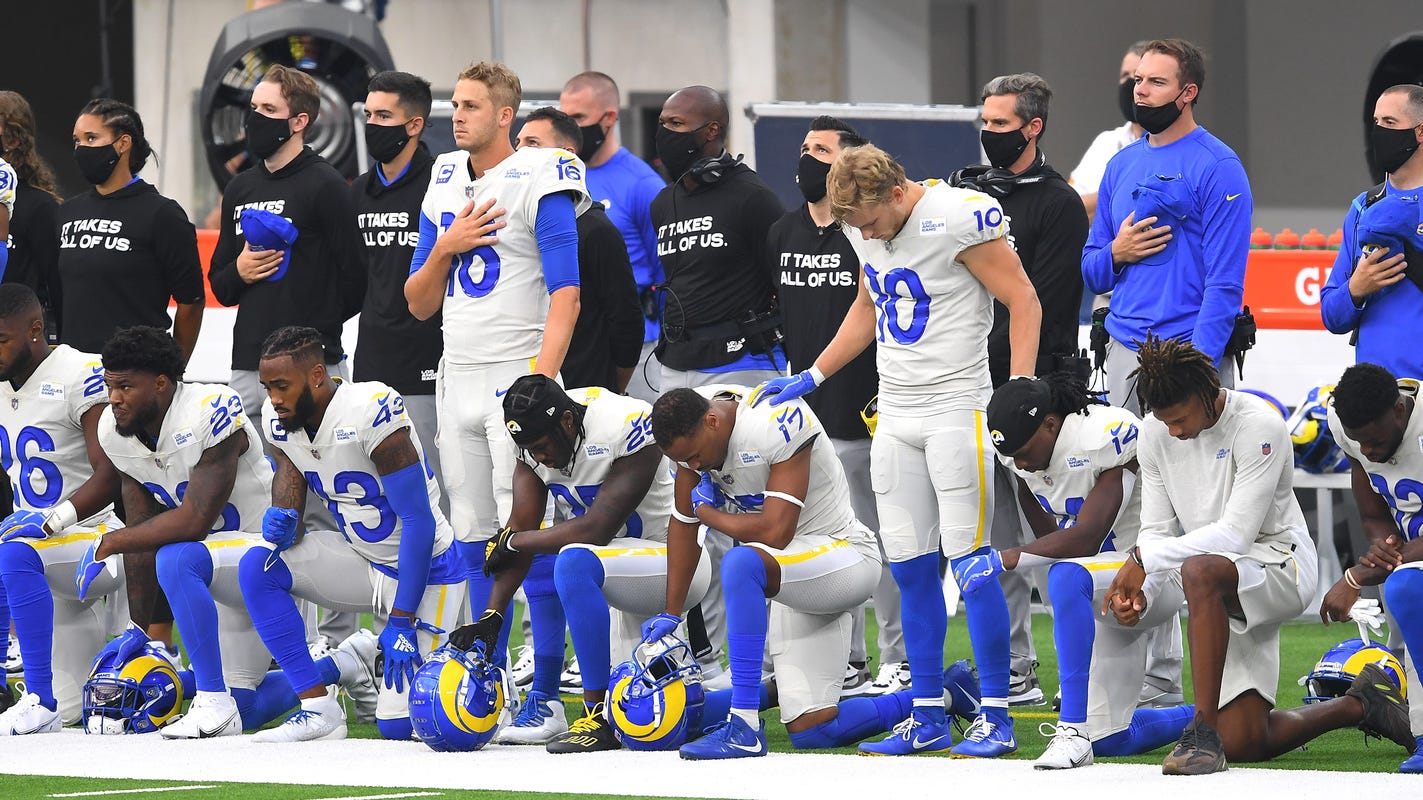 NFL needs to exert its influence to bring about substantive change

Nobody puts on a show quite like the NFL, what with its big-name entertainment, slick slogans and displays that seem choreographed even when they’re not.

Four years after Colin Kaepernick first took a knee to protest police brutality against Black men and women, the NFL is trying desperately to show it cares. To make amends for refusing to hear the pleas for equality and justice and, worse, its role in allowing them to be framed as disrespectful and unpatriotic.

“Lift Every Voice and Sing,” better known as the Black national anthem, was played before every game on the NFL’s opening weekend, accompanied by a slick video that included footage of Kaepernick protesting. At least a half-dozen teams stayed in their locker rooms for “The Star-Spangled Banner,” and several players who were on the field took a knee. The Los Angeles Rams ran onto the field carrying “It Takes All of Us” flags, one of the phrases painted behind the end zone in every stadium.

Los Angeles Rams players shown on the sidelines during the national anthem before the game against the Dallas Cowboys at SoFi Stadium. (Photo: Jayne Kamin-Oncea, USA TODAY Sports)

But these efforts to shine a spotlight on racial injustice won’t create the national moment they once might have. It’s no longer enough simply to command attention. What do you think Kaepernick did four years ago? Or the protests that occurred this summer in all 50 states, in cities big and small, following the deaths of George Floyd, Breonna Taylor and Ahmaud Arbery?

What’s needed now is action, and it will be months, maybe years, before we know whether there is any real substance behind the NFL’s show.

“While the NFL runs propaganda about how they care about Black Life, they are still actively blackballing Eric Reid for fighting for the Black community,” Kaepernick said Sunday, retweeting a story that questions why Reid remains unsigned.

Reid, the first player to join Kaepernick in protest in 2016, tied for the second-most solo tackles in the NFL last season with 97. He also had four sacks, a forced fumble and two fumble recoveries.

Don’t get me wrong, the protests and demonstrations by the NFL community are both worthwhile and righteous, if for no other reason than they keep the focus on the national reckoning we must have with systemic racism. And when Indianapolis coach Frank Reich, who is white, takes a knee, or New Orleans coach Sean Payton wears Breonna Taylor’s name on his gaiter, it’s going to resonate in a different way.

But the changes this country needs are structural, the racism that needs to be rooted out entrenched in pretty much every aspect of our society. To do that will take more than gestures, well-meaning as they might be.

“We need changed hearts, not just a response to pressure. Enough. No more fluff and empty gestures,” the Miami Dolphins said in a powerful video released Thursday night. “We need owners with influence and pockets bigger than others, to call up officials and flex political power.”

Substantive change requires money and influence that players and coaches simply don’t have. The NFL, and more particularly, its owners, do, but there is little evidence they have much interest in leveling the playing field for those who don’t look like them or reshaping the country so there really is liberty and justice for all.

Dolphins owner Stephen Ross, for example, talks a good game, creating RISE, the Ross Initiative in Sports for Equality, and announcing in June that he would donate an additional $13 million to the foundation’s anti-racism efforts. Yet this is the same guy who in 2019 held a six-figure-a-plate fund-raiser for President Donald Trump, whose entire political career is based on racism and bigotry.

The NFL says that, since 2017, it has awarded more than $44 million in grants to social justice organizations through its Inspire Change program. But that’s pocket change for a $15 billion a year league. Jerry Jones shelled out five times that amount just for his yacht.

NFL owners have the kind of sway that can get policies enacted and legislation passed. But they have to be willing to use that clout, to show their commitment to the players’ pleas for change isn’t yet another hollow display of concern by the NFL.

So use them. Otherwise, the NFL’s support for the current racial justice movement is nothing more than another one of its shows.