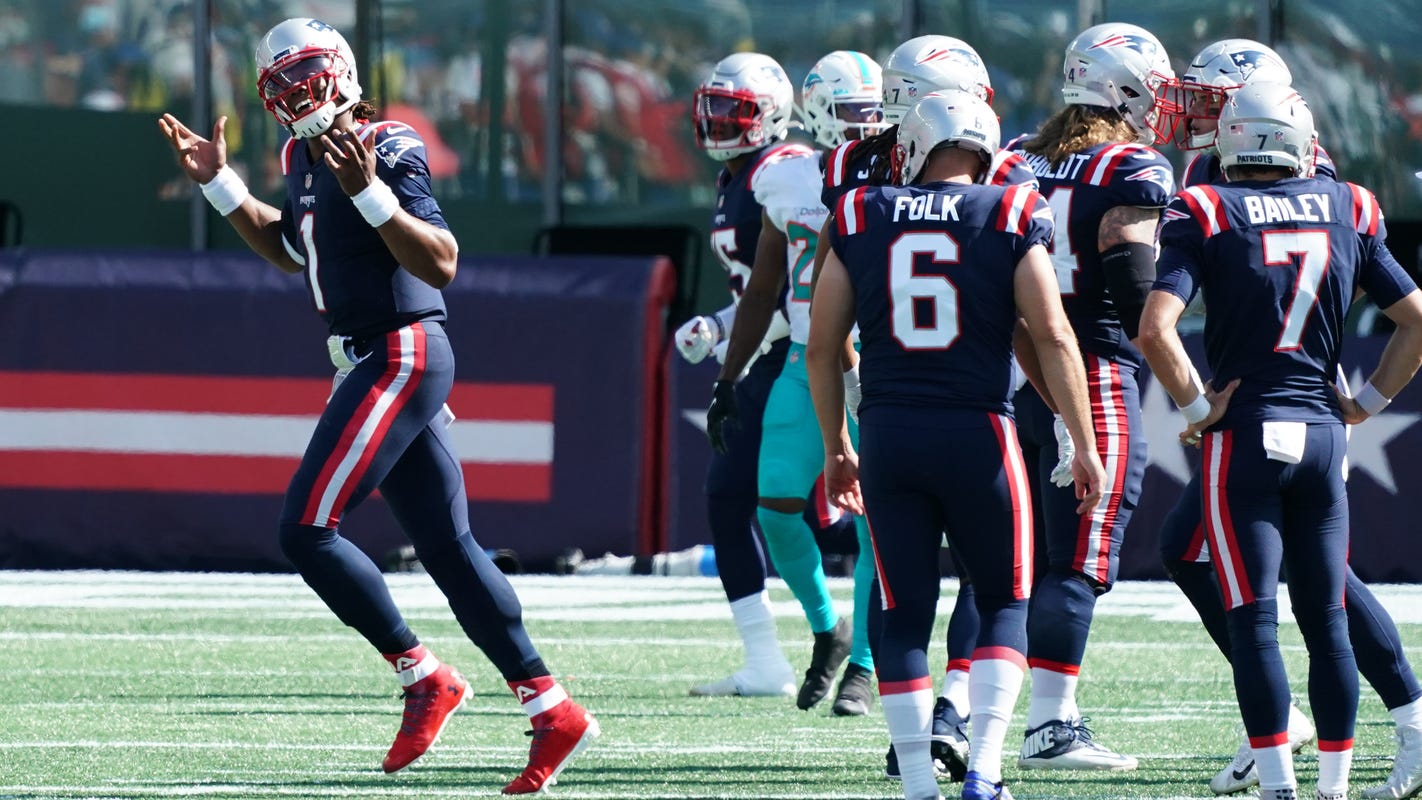 So much had to break the right way for the NFL to get here, but the first Sunday of the 2020 season, during a global pandemic, is in the books.

A full slate of games kicked off, with the Jacksonville Jaguars being the only home team to host fans as the country continues to face the COVID-19 pandemic. But there were some huge names in new places, none bigger than Tom Brady making his debut for the Tampa Bay Buccaneers and Cam Newton replacing Brady in New England, as well as come-from-behind victories and a reigning MVP in Baltimore Ravens quarterback Lamar Jackson picking up right where he left off.

Here are the opening week winners and losers from Sunday’s NFL action.

The NFL, its players and fans

There’s no way to understate this: the entire league, thanks to its rigorous testing and work from medical staffers and buy-in from players and the NFL Players Association, deserves an abundance of praise. Essentially, the NFL provided the blueprint for how to execute a non-bubble sports season during a pandemic.

That the NFL, players and support staff have pulled it off only benefits everyone involved in the league, fans included. Although revenues are certainly expected to be well below what they would be in a regular season, the NFL’s ability to keep players and coaches healthy – and keep games played as scheduled – is an indicator that the league could weather the pandemic. But this is just the beginning. At some point, the 32 teams may face outbreaks and infections. How they respond will determine the viability of a full season. This start, however, is better than anyone could have reasonably hoped for.

One common thread woven throughout New England’s dominant stretch as the most consistent dynasty over the past two decades has been adding players who were undervalued and deemed problematic at other stops. Newton, the 2015 NFL MVP, is the latest case. With the quarterback fully healthy, the Patriots showcased just how dangerous he is when he can be used as a dual threat in their 21-11 victory against the Dolphins.

Cam Newton and the #Patriots relied heavily on run-action, using play action OR run on 83% of offensive plays (52 out of 63 plays).

It was the 5th-highest rate by any team over the last two seasons and the highest by the Patriots over the last five seasons.#NEvsMIA | #GoPatspic.twitter.com/jhrckeeAkm

Miami did get back into the game, eventually closing the margin to three points, but Newton’s dominance sealed the victory. On a pivotal fourth-and-1 from Miami’s own 5-yard line with just more than six minutes left in the game, Newton (15-19 passing for 155 yards, 15 carries, 75 yards and two touchdowns) plowed through the Dolphins defense and got the first down. The Pats eventually scored a touchdown. On a bargain contract after he sat as for three months as a free agent, Newton showed the Patriots are still contenders in the AFC, even with Tom Brady gone.

Two second-year passers in Minshew of the Jaguars and Murray of the Arizona Cardinals led their teams to huge upsets against division rivals. Minshew was surgical, completing 19 of 20 passes for 173 yards and three touchdowns in a 27-20 takedown of the Indianapolis Colts. Murray made play after play with his arm and legs and racked up 321 total yards and two scores in a 24-20 victory against the reigning NFC champion 49ers.

Perhaps what was most impressive from both quarterbacks was how calmly they orchestrated their offenses in the face of steady deficits. Indianapolis held a lead against the Jaguars four different times and San Francisco paced Arizona two different times. Minshew will have a tougher time leading a depleted Jags roster to the playoffs, but Murray (with his versatility) sent a message that the Cardinals are, at the very least going to be a tough out for teams this season.

After a one-year hiatus from coaching, Mike McCarthy came into this season with high expectations for the Dallas Cowboys. But it’s easy for fans to digest Dallas’ 20-17 loss against the Los Angeles Rams and come away unimpressed.

Many will criticize offensive coordinator Kellen Moore’s play calling – the Cowboys often dialed up plays short of the first down sticks as Dallas converted just three of 12 third-down attempts – but a critical stretch will surely get the most debate. On a third-and-6 from the Los Angeles 14-yard line with 12:26 left in the game, the Cowboys called a draw to running back Ezekiel Elliott that gained 3 yards. Rather than take the points and tie the game, Dallas went for it on fourth down and completed a pass to rookie receiver CeeDee Lamb, but he was stopped short.

Clutch tackle on fourth down by Jordan Fuller 💪 @J_Fuller4#RamsHouse

On a night in which Dallas had several key contributors go down with significant injuries, however, the biggest concerns are an offensive line that got pushed around and a defense that allowed far too many drives to get extended (the Rams converted nine of 17 third-down attempts).

There’s no way more brutal to drop a season opener than to squander leads of double-digit points. And both Philadelphia and Detroit let 17-point advantages slip away. For the Eagles, an injury-battered offensive line was overwhelmed and yielded eight sacks – the most quarterback Carson Wentz has endured in a single game in his career – in a loss to the Washington Football Team. The Lions fell to the Chicago Bears 27-23 after quarterback Mitchell Trubisky went off in the fourth quarter, a period Detroit started leading 23-6.

In both cases, familiar issues plagued both teams. Wentz showed he has a tendency to hold on to the ball too long. And the Lions’ propensity for blowing fourth-quarter leads under coach Matt Patricia resurfaced. And in both cases, these issues could linger and present long-term problems.

To be fair, this was always going to be a tough ask for a rookie head coach, to try and topple the Ravens and Jackson. But in their 38-6 loss against Baltimore, this Browns team under Stefanski looked a lot like the Browns from last year: eight penalties for 80 yards that often pushed the offense back and created third-and-longs, ineffectiveness on those third downs (three of 12 conversions), a botched fake punt and three turnovers.

Receiver Odell Beckham Jr. still hasn’t taken off. He had a costly drop in the second quarter in the red zone and was targeted 10 times but only caught three passes for 22 yards. When talking about the frayed connection between Beckham and quarterback Baker Mayfield, Stefanski said the Browns “have to get to the bottom of it, obviously.” Again, the Ravens are one of the best teams in the AFC. But if these recurring issues become long-term patterns, the Browns could be headed toward a rebuild rather than breaking a postseason slump of 18 seasons.

For a team that was a trendy pick to win its division and potentially make a deep postseason run, a season-opening 27-20 loss against a Jaguars team in a full rebuild is eye-opening. It wasn’t all bad for Indianapolis. The Colts outgained Jacksonville 445-241 and averaged 6.4 yards a play compared to 5.1 for the Jaguars. New quarterback Philip Rivers completed at least two passes to nine different targets.

But the Colts struggled situationally. The offense converted just two of five red zone trips into touchdowns. It moved the chains on only four of 12 third-down tries. And Rivers’ two interceptions, including a costly one deep in the fourth quarter, doomed Indianapolis. It’s just the first week of the season, but this type of game, against a roster with obvious holes, is one that good teams need to take care of.

It was a rough go for the Jets and their quarterback entering his important third season. Darnold started the game three of 10 for 22 yards with one interception and the Jets, on their first five possessions, gained only 32 yards. The Jets lost to the AFC East-rival Bills, 27-17, in a game that negated much of the offseason optimism that surrounded talk of Darnold potentially making strides in his second year under coach Adam Gase. Darnold looked uncomfortable, unsure and fidgety at times in the pocket, missed open receivers and tossed a misguided interception on a throw across his body.

If Darnold doesn’t demonstrate marked improvement and growth, it could be a long season for the Jets, who otherwise lack star power at the skill positions. Said Gase after the game: “It was about as bad of a start offensively as we could’ve had. Complementary football was nonexistent throughout most of the game.”