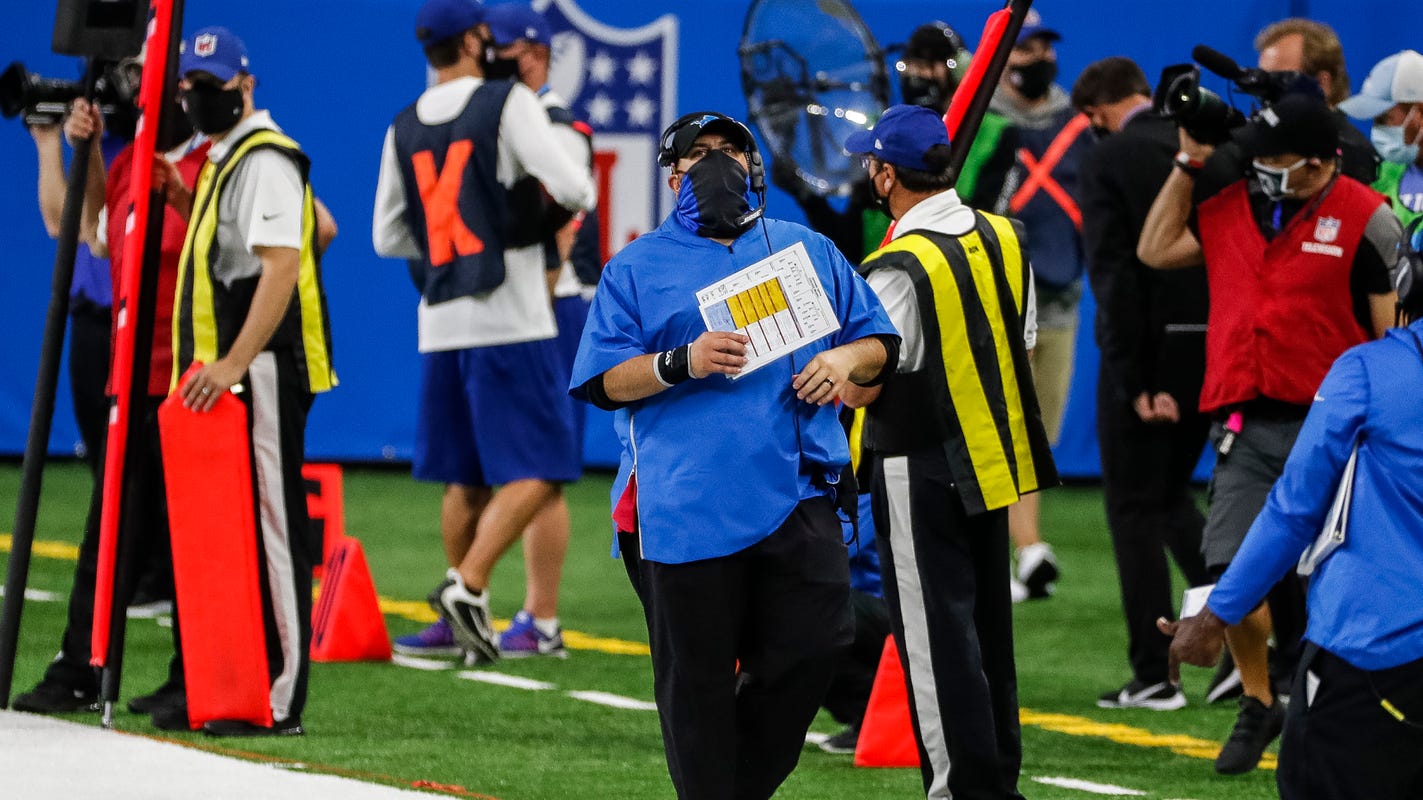 See it to believe it? Not when you’ve seen it what feels like a thousand times before.

A questionable coaching decision. A missed field goal. A costly interception. And a late-game defensive collapse against one of the most maligned quarterbacks in the NFL.

The Detroit Lions put that batch of ugliness together in another abominable fourth quarter Sunday to blow a 17-point lead and lose their season opener to the Chicago Bears, 27-23, at fanless Ford Field.

Matt Patricia made the questionable coaching decision, opting to try a 55-yard field goal with his team up 10 points and 4:08 to play.

Matt Prater clanged the kick off the right goalpost, giving the Bears the good field position they needed for Mitchell Trubisky to lead a momentum-turning touchdown drive.

Matthew Stafford threw a deflected-ball interception on the ensuing series, and Trubisky followed with a game-winning touchdown pass two plays later to Anthony Miller on a play that he was a near facsimile of one he beat the Lions with last year.

The Lions had a chance to win on their final drive, but rookie running back D’Andre Swift dropped what would have been the go-ahead touchdown on the goal line with 6 seconds to play, and Jaylon Johnson knocked down Stafford’s desperation last pass to Marvin Jones in the end zone.

“We can’t do things that hurt ourselves, which we did in the fourth quarter,” Patricia said. “I mean you can’t win when you do that stuff. It starts with coaching, we’ve got to do a better job of coaching, that’s me. And we’ve got to go execute out on the field as a team.”

In 2018, they suffered an embarrassing 48-17 loss to the New York Jets after returning an interception for a touchdown on the game’s first play from scrimmage. The loss was so bad that Patricia huddled his team together on its practice field days later to bury a game ball in an effort to move on from the defeat.

Last year, they blew an 18-point fourth-quarter lead in a tie with the Arizona Cardinals, and went on to lose second-half leads six mores times on the season en route to a 3-12-1 record.

“We tied that game in Arizona, but yes it feels similar to that,” wide receiver Danny Amendola said. “We were up, trying to make plays, trying to run some clock out, move the chains, and play good football. It goes to show how close every game here in the NFL is and one mistake here, one mistake there is costly.”

The Lions made several mistakes in the final six minutes Sunday.

Stafford took a 9-yard sack on second-and-8 that knocked the Lions out of field goal position, but when Swift picked up 5 yards on the next play, Patricia decided to try and extend his team’s 23-13 lead.

Detroit Lions head coach Matt Patricia watches a replay as he walks down the sideline during the second half of the season opener against the Chicago Bears at Ford Field in Detroit, Sunday, Sept. 13, 2020. (Photo: Junfu Han, Detroit Free Press)

He defended that decision after the game, saying he has “all the confidence in the world” in Prater and pointing out that his defense lost two starting cornerbacks — Justin Coleman and Desmond Trufant — to hamstring injuries earlier in the game.

When a reporter asked whether the Lions were more prone to late-game collapses because of his coaching, Patricia pointed to his success as a defensive coordinator with the New England Patriots, who once won a Super Bowl after Malcolm Butler made a game-saving interception on the goal line.

“I don’t think so,” Patricia bristled. “I think I’ve got probably one of the biggest plays in the fourth quarter in the history of the NFL where I think I did a pretty good job. So I don’t think it’s that. I think we all know what the individual games are. We got to do a better job. We’ve got a team right now that’s different than the previous two years. This team is different, they’re different players and they have a different mindset. We have no excuses, give the Bears credit. They did what they did and they executed and they scored and they won and we didn’t.”

The Bears started their possession after Prater’s missed field goal at their own 45-yard line and marched quickly downfield.

Trubisky, who edged Nick Foles for the starting quarterback job in training camp, completed all five of his pass attempts on the drive for 55 yards.

The Lions ran just three plays on their ensuing drive before Stafford tried to squeeze a pass to Jones that deflected off Johnson’s arm and into the air, where Kyle Fuller grabbed it to give Chicago a first down at the Lions’ 37-yard line.

David Montgomery ran for 5 yards on first down, and after a Jahlani Tavai offsides penalty gave the Bears first-and-10 at the 27, Miller beat Tony Mc down the sideline for a touchdown.

Stafford drove the Lions to the Bears’ 16-yard line on their final possession, and when Swift dropped a would-be touchdown on second-and-10 the whole Chicago sideline let out a sigh of relief.

“What a break,” Bears coach Matt Nagy said. “I mean, I saw that ball on the corner route go right in his hands. And you could see, I think you could feel for a second, the whole sideline for Detroit just start jumping up and down and going crazy. And then it was, they started like grabbing their heads, because they saw him drop it. And then we started cheering.”

Stafford finished 24 of 42 passing for 297 yards,  and Adrian Peterson ran for 93 yards on 14 carries in his Lions debut.

Trubisky was 20 of 36 for 243 yards and three touchdowns for the Bears. He’s 4-0 against the Lions the past three seasons, but has struggled against most other teams.