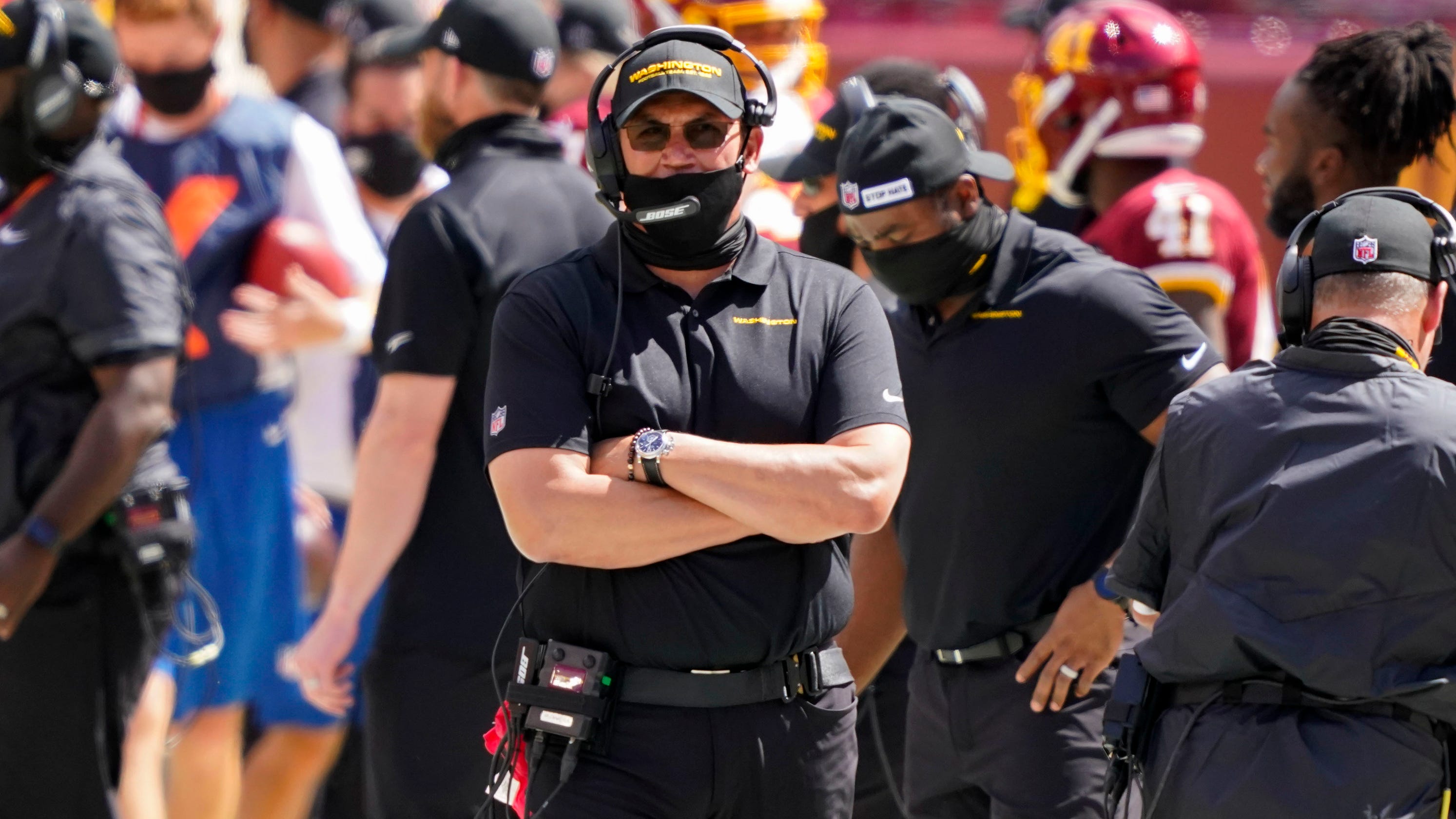 LANDOVER, Md. — While kicking off the Ron Rivera era against the Philadelphia Eagles on Sunday at an empty FedEx Field, the Washington Football Team delivered a first-half performance befitting the organization’s calamity-filled offseason.

Trailing by double digits, the players retreated to the locker room. But their coach was not with them. Instead, Rivera — diagnosed with squamous cell carinoma earlier this offseason and still undergoing treatments — was receiving an IV to ensure that he could complete the second half.

Sensing the need for someone to fill the void, quarterback Dwayne Haskins stood up and delivered an impassioned speech.

“We’re home,” the second-year quarterback, who at that point had completed only seven passes, reminded his teammates. “We’re the home team. They’re the visitors. There’s no reason why we should be feeling like we should be little bro to them.”

After an uneven rookie campaign and an offseason spent trying to learn how to lead on and off the field, Haskins is very much still finding his way in this league. But as the words rolled off his lips, they struck a chord with Washington’s other players.

“He got everybody fired up,” Rivera said. “It was a pretty ruckus (speech) from what I understand.”

Haskins and his teammates returned to the field and together they orchestrated a 27-17 comeback victory, outscoring the Eagles 20-0 in the second half to earn their first win of the season. Washington’s defense — loaded with dynamic, yet youthful talent — overwhelmed the Eagles, registering a total of eight sacks and two interceptions on the day. The offense in the second half executed a deliberate yet patient game plan and found its rhythm. An aggressive, late-game, fourth-down call from Rivera that led to a touchdown rather than a field goal sealed the victory.

As the first half showed, Washington’s young squad remains in the throes of a rebuild. However, after an offseason shaped by the sexual harassment and misconduct allegations against owner Daniel Snyder and other former team officials, coronavirus restrictions and uncertainty, and their own coach’s health scare, Sunday’s victory provided a much-needed reprieve for Washington’s coaches and players.

“It’s been a tough offseason. It has,” Rivera acknowledged after the game. “But I just love the resilience of these young men. They’re a bunch of guys who work hard at it. We didn’t have a lot to gauge who they are or what we can become, but I really am proud of them.

“What we did was we set the tempo and we showed we can play with the best team in the NFC East and that’s the Philadelphia Eagles,” Rivera continued. “They’re a well-coached team and we know that, but our guys bowed their necks when they had to, they kept fighting and it showed what these guys are capable of.”

Washington’s second-half performance offered a blueprint for success in the next 15 games.

This team may not be ready for prime time. But it has the capability to compete.

Washington Football Team head coach Ron Rivera, walking on the sidelines during the first half of an NFL football game against the Philadelphia Eagles, Sunday, Sept. 13, 2020, in Landover, Md. (Photo: Alex Brandon, AP)

The defense won’t always have the fortune of facing an opponent with an offensive line as injury-riddled as Philadelphia’s. But even if the unit doesn’t rack sacks as easily as it did on Sunday, its aggressive and deep pass rush should help keep Washington in games.

The offense may not yet be a well-oiled attack. Haskins still is refining his mechanics and developing his feel for NFL defenses, as are his young wide receivers and running backs. And first-year offensive coordinator Scott Turner has growing to do as a play-caller. However, Washington can still operate with efficiency by utilizing a disciplined approach in which it takes what the defense offers, picks its spots and plays to the strengths of its personnel.

Rivera offers the steady and calming voice of wisdom that this developing unit badly needs. He demonstrated this late in the first half when he assessed the offensive game plan and surmised his team had “tried to force a couple things.”

He explained, “And I’ll be honest, I felt like (Turner) was reaching. We had a talk over the headset and he settled in and called a heck of a game.”

The coach added that even veteran defensive coordinator Jack Del Rio was rusty with his in-game play-calling.

Rivera reminded both his assistants and players, “We don’t have a 17-point play, so let’s just take them one at a time.”

From there, the defense played with greater discipline, eliminating the penalties that enabled the Eagles to thrive on third downs during the first quarter-and-a-half. Then the sacks and takeaways began to follow.

Energized by Moreau’s interception with 1:44 left in the second quarter, the offense settled into more of a simplified yet up-tempo pace and eventually scored on a Haskins pass to tight end Logan Thomas.

Down 17-7 at halftime, Haskins reminded his teammates that in Week 1 of 2019, Washington led Philadelphia 17-0 at Lincoln Financial Field before losing 32-27. He implored his teammates to “find a way” to win.

Another strong display of leadership from Rivera put Washington over the top with less than eight minutes remaining. With the score tied 17-17, Washington faced fourth-and-1 from the Philadelphia 4. A field goal would’ve given the team a lead and would have represented a logical move given how dominant Washington’s defense had been to that point. But instead, Rivera told Turner to go for it. A 1-yard plunge by Peyton Barber got Washington the first down, and two plays later, the back scored to deliver a lead Washington never relinquished.

Asked about his decision, Rivera said the call was about more than just that late-game situation. It was a move intended to be a building block for the future.

“I wanted the guys to understand that I believed in them,” said the man known as Riverboat Ron because of his willingness to take gambles. “My first couple years as a head coach, I made that mistake in not showing the guys I believed in them, so it took us a little bit longer. So, I wanted to do that. We got that first down and it was a big first down. Peyton Barber did a great job getting that ball outside on the right edge and lunging for the first down and that really put us in position to win this football game.”

Rivera, whose team gave him the game ball for earning his first win, sent one more message to his players following the victory.

“It’s a what-have-you-done-for-me-lately league,” he said, reminding them that Washington’s players and coaches, Rivera included, would have to prove themselves all over again next week.

For this week, however, Rivera proved himself to be exactly what the beleaguered franchise needed.